The Tale of the Forgotten Cristy Bar!

One of my favorite things to write about and share here on CollectingCandy.com are the forgotten and lost stories of candy history that I’ve been lucky enough to uncover.  Today I’m going to share the tale of a bar that few, if any of my readers will remember.  It’s something I’d never even heard of until I stumbled upon it during unrelated research;  Concorde Confections’ Cristy Bar!

First announced to the candy trades in August of 1969, the initial advertisement featured a Christy bar spelled with an “h”.

I don’t know if that version of Christy bar ever made it to store shelves, but by April of the following year, Christy would become Cristy (without the “h”), and would be voted one of the two best new bars of 1969:

The design of the logo changed as well as the spelling, so I wonder if the bar seen in that early announcement was merely a prototype or mock-up?  Though perhaps there is a Christy-with-an-H bar wrapper out there somewhere, waiting to be found.  Here are the two versions brought together: 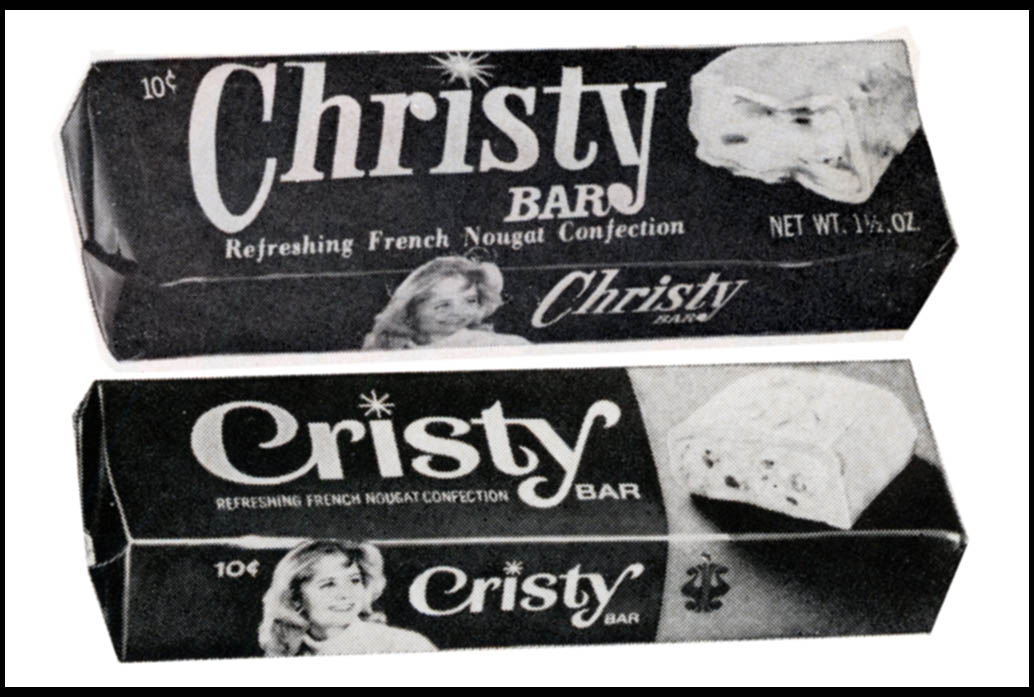 I first became interested in the Cristy bar due to the company that launched it, Concorde Confections.  You see, Concorde were best known to me as the company who ran the Wonka confectionery brand through most of the 1970’s, with their Oompas, Skrunch, and Wonka Bars to name a few.

The Cristy bar was touted as Concorde’s very first bar, so my initial thought was that it made it historically significant and connected to the Wonka confectionery legacy – if somewhat loosely.

[Editor’s note: Since the Cristy bar was Concorde’s first bar I’m prompted to speculate an alternative history:  Perhaps without their initial Cristy bar success, Concorde wouldn’t have survived and the Wonka candy history that we know would be dramatically different?]

Due to its current anonymity, at first I thought that the Cristy bar was only around for a year or two at most.   But I’ve found trade ads for the bar that were dated as late as 1972, leading me to realize it had a longer life: 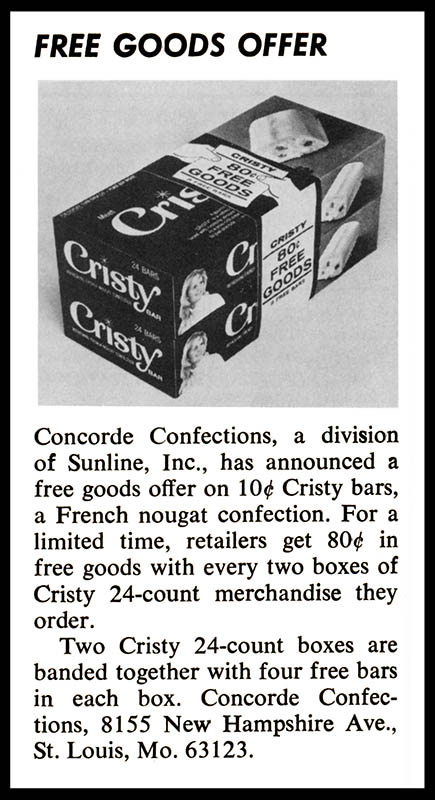 Beyond that 1972 trade clipping, I’ve also managed to track down an even later Cristy bar display box.  This display box is an important piece for understanding Cristy’s lifespan as it features a redesigned logo.  This would lead me to deduce that Cristy lasted at least through 1973, possibly longer. 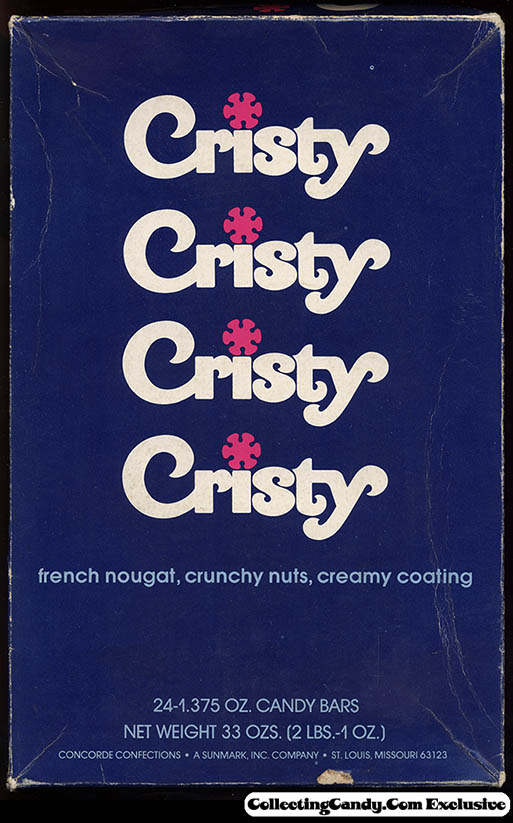 So while the Cristy bar began as a brand that I didn’t recall personally and that no one I’d ever asked about could remember – I still developed a keen interest in it due to its place in candy history.

As my appreciation for the brand grew I wondered if a wrapper for one of these bars might still exist and if, as a collector, I’d ever come across one?

Earlier this year my question was answered and not only did a Cristy wrapper surface, but I was able to add it to my collection.  This next wrapper image, along with most everything else from today’s post, is a CollectingCandy.com exclusive – meaning you won’t find this anywhere else online. 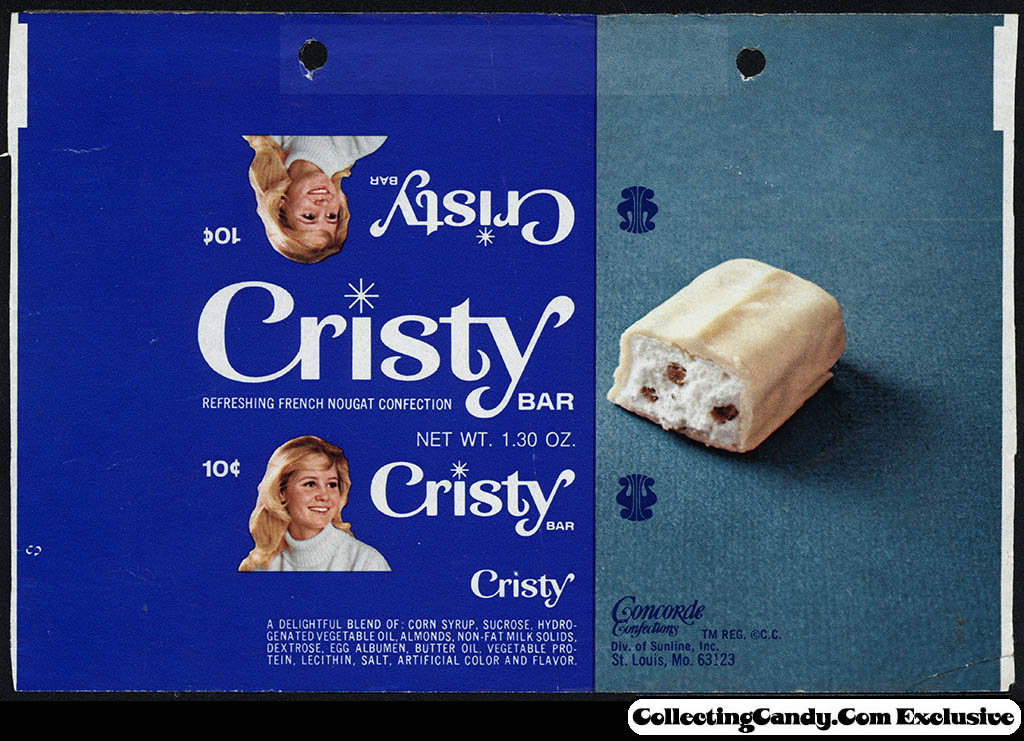 Isn’t that a beauty?  I’ve often wondered if this bar was meant to appeal to women and girls, as I think most adolescent boys wouldn’t have wanted to pick up a bar with a girl’s name.  Yet the compelling visage of the pretty, smiling girl must have certainly grabbed boys’ attentions and imaginations.

And it does make me wonder if Cristy Bars were ever racked next to $100,000 bars, when their “kid mascot” wrappers were introduced? 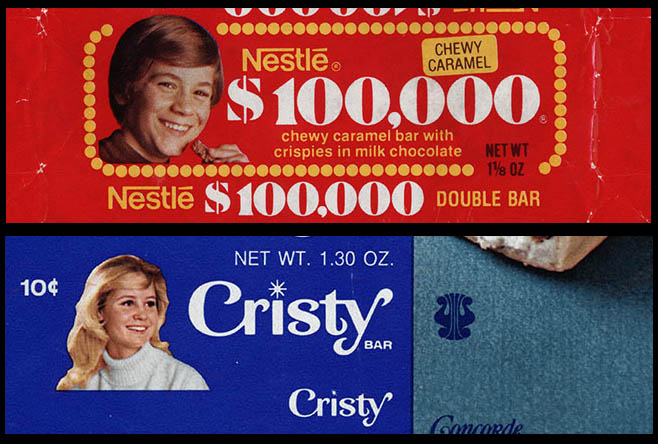 I’m tempted to remark about a “candy wrapper romance”, but seeing the two together does make me wonder if the Cristy wrapper influenced the use of a personality photo on the later $100,000 wrapper design.

Perhaps the girl on the wrapper – Cristy herself – is out there somewhere, and if she or anyone she knows reads this, drop us a line – I’d love to hear the story of how she became the face of Concorde Confections’ very first bar.

And that everything I’ve got on the tale of the forgotten Cristy Bar.

A New York City based writer, editor and sometimes actor. After spending much of the 1990′s in the comic book business helping tell the stories of Marvel Comics’ X-Men as series editor, he has since split his time between developing his own entertainment properties while still consulting and working on others. Having been described as “the Indiana Jones of lost and forgotten candy”, Jason is one of the country’s premier candy collectors and historians with his discoveries appearing in countless blogs, magazines, newspaper articles, and books. Always happy to share his knowledge and unique perspectives on this colorful part of our popular culture, Jason has consulted with New York’s Museum of Food and Drink and has also been a featured guest on Food Network’s Heavyweights, France’s M6 Capital, and New York’s TheActionRoom.com. My Google Profile+
View all posts by Jason Liebig →
This entry was posted in 1960's, 1970's, Wonka and tagged 1960's, 1960's candy, 1970's, 1970's candy, candy collecting, candy collection, candy collector, candy wrapper collection, candy wrapper collector, collectible, collecting candy, Concorde Confections, confectionery, confections, Cristy Bar, packaging, sweets, vintage candy wrapper, wrapper. Bookmark the permalink.

16 Responses to The Tale of the Forgotten Cristy Bar!