Breaker Confections is a name that you might not know, although you’ll certainly recognize some of their more successful creations like Bottle Caps, Tart N Tinys and Everlasting Gobstoppers.   The company name was retired when it became a part of the Willy Wonka Brands group in the early 1980’s.  But long before they were developing classic Wonka treats, Breaker Confections were known for their own branded goodies.  Today I’ll be showcasing a few of their 5-cent boxed offerings from the 1960’s that have not likely been seen in nearly half-a-century.

Due to my love of the Wonka brand, I’ve long had an interest in the product lines that preceded it.  Wonka Brands was created mainly from three different companies; Breaker Confections, Concorde Confections, and Sunline.  Each brought different products to the mix and in much the way I covered the pre-Wonka Concorde Confections’ Cristy and Cabaret bars, today I’ll be looking at a few from Breaker.

As a collector, I would come to appreciate Breaker Confections’ history through their later Wonka products, but I would not uncover any images of Breakers’ own branded packaging until I found the following trade ad from 1963, showcasing their 5-cent boxed lineup: 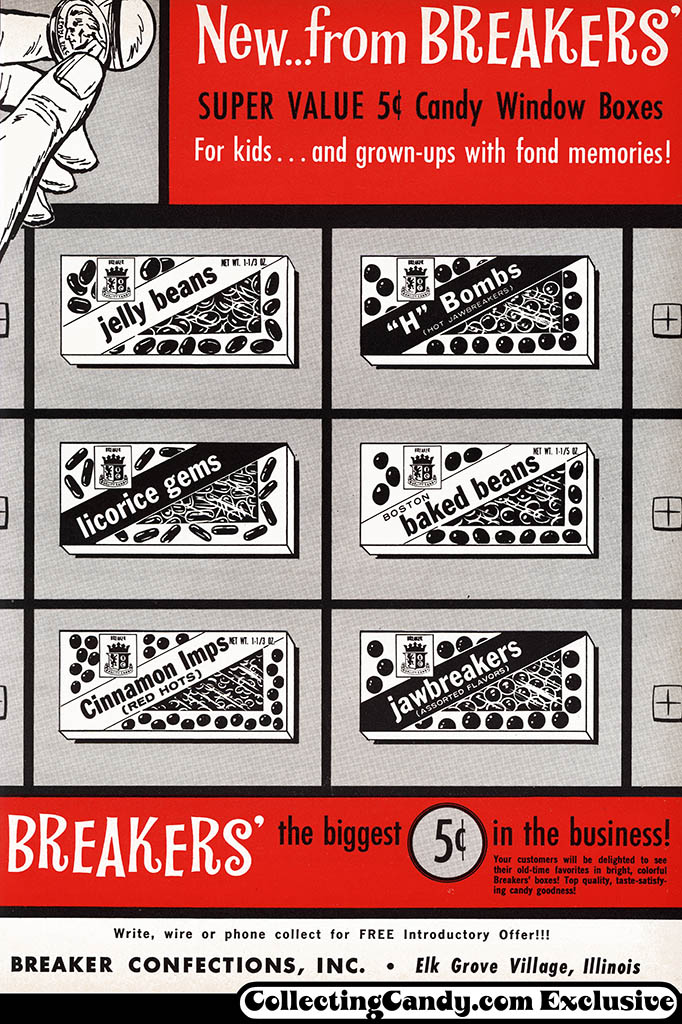 I’d never encountered any of those boxes before, or any packaging with that version of Breakers’ logo.  So a few years ago when I met another collector who had a Breakers’ branded box in his own collection, I was blown away.  It was smaller than the 5-cent size found in my trade ad, but was still amazing to see:

After seeing that Breakers’ H Bombs box, I suspected I might never find any others and that perhaps the 5-cent window boxes illustrated in that old trade ad had been lost to history, never to be seen again.

But just a few months ago I was thrilled to acquire a pair of the very boxes from that old advertisement, and they were in remarkable condition considering their age.

As I would learn, the boxes were found in the estate of an elementary school teacher from the Peru/Kokomo, Indiana area who  had saved every prop she ever used in her classroom.  These candy boxes had been put to work back in the 1960’s as part of one of her classroom lessons, and then were stored away to be discovered decades later. 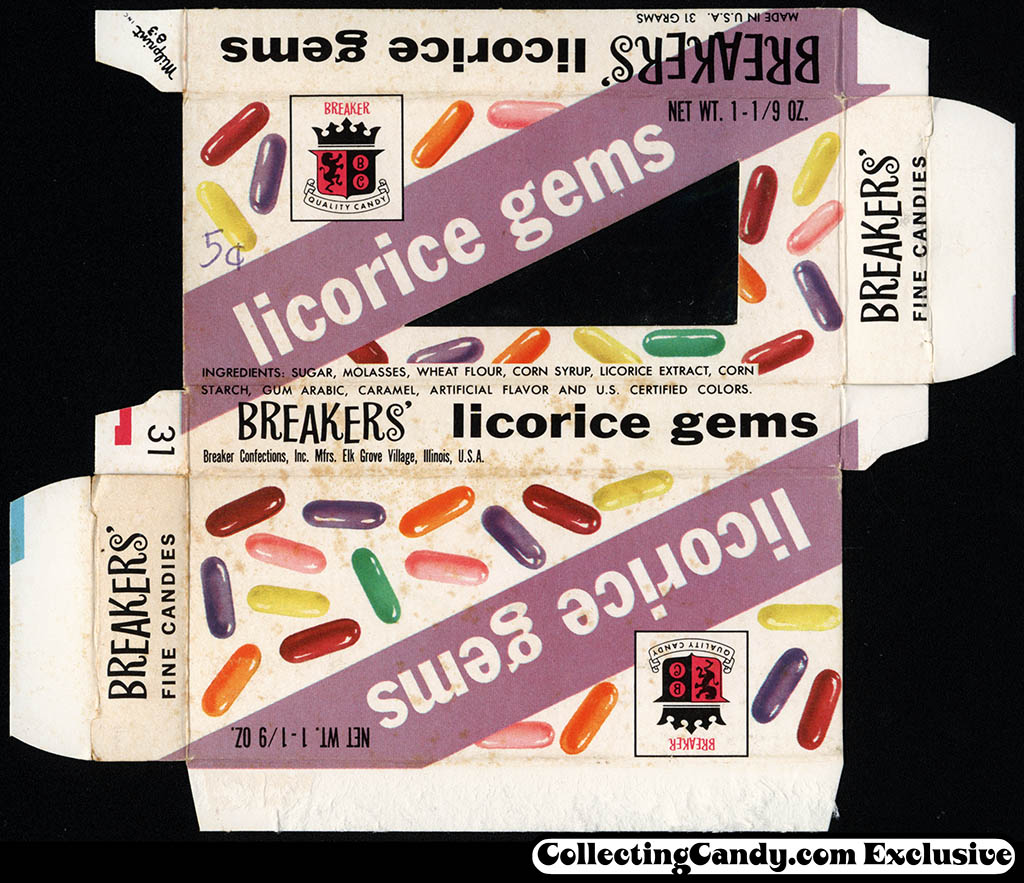 Isn’t that a beauty?  The black-and-white illustrations on the trade ad didn’t do these boxes justice.  Here’s the other: 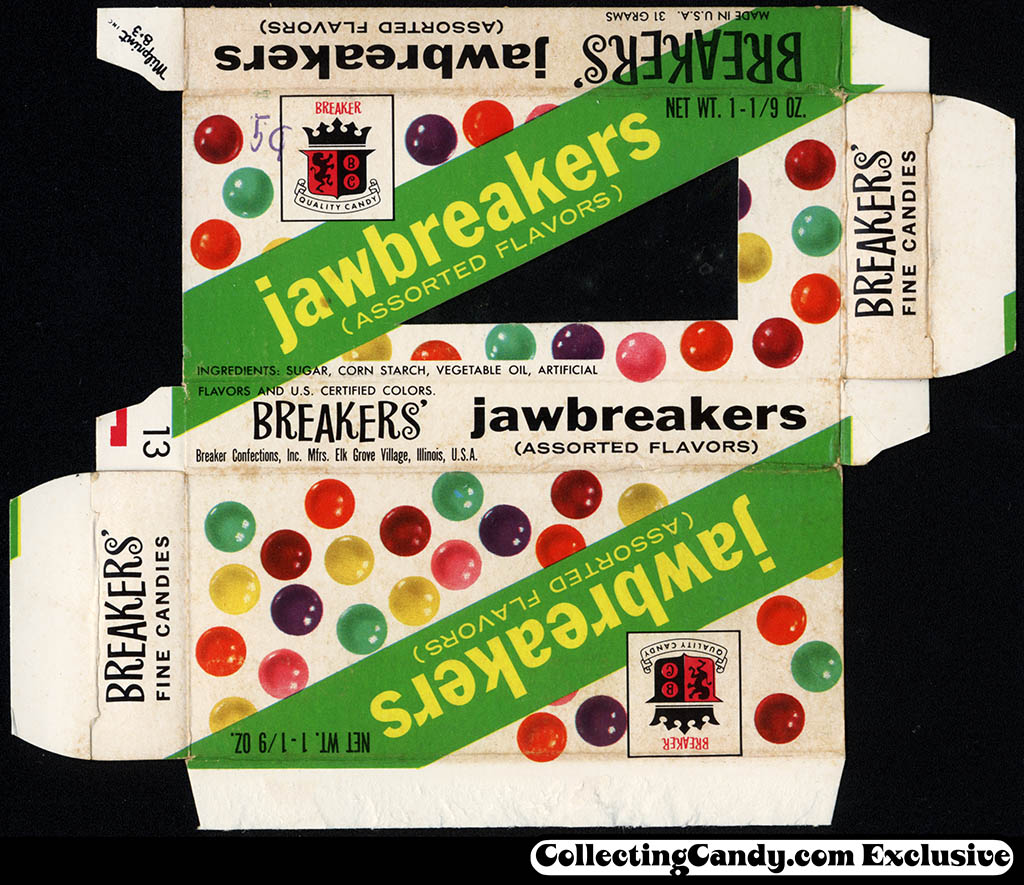 That Jawbreakers box is stunning and is my favorite of the two.  I also feel that it has special historical significance.

When possible, I like to create lineages for candy brands and packaging, and this Jawbreakers box is one I consider an ancestor to the Everlasting Gobstopper Minis that Breaker would introduce just over a decade later – and one that is still sold today.  That makes this box pretty special, I think.

So it was just the pair of Breakers’ 5-cent boxes that were found in that elementary teacher’s files.  In much the same way that I once wondered if ANY of the boxes from that ad might ever be found, I now ponder the chances of ever tracking down the remaining four that the ad included?  For now, my search continues.

And that’s everything I have on Breakers’ own line of branded confections.  I  hope you guys enjoyed the look at these candy boxes that probably haven’t been witnessed in nearly 50 years.

A New York City based writer, editor and sometimes actor. After spending much of the 1990′s in the comic book business helping tell the stories of Marvel Comics’ X-Men as series editor, he has since split his time between developing his own entertainment properties while still consulting and working on others. Having been described as “the Indiana Jones of lost and forgotten candy”, Jason is one of the country’s premier candy collectors and historians with his discoveries appearing in countless blogs, magazines, newspaper articles, and books. Always happy to share his knowledge and unique perspectives on this colorful part of our popular culture, Jason has consulted with New York’s Museum of Food and Drink and has also been a featured guest on Food Network’s Heavyweights, France’s M6 Capital, and New York’s TheActionRoom.com. My Google Profile+
View all posts by Jason Liebig →
This entry was posted in 1960's, Boxed, Hard Candy, Wonka and tagged 1960's, 1960's candy, 60's candy, Breaker Confections, Breaker's, candy collecting, candy collection, candy collector, candy wrapper collection, candy wrapper collector, collectible, collecting candy, confectionery, confections, jawbreakers, packaging, sweets, vintage candy wrapper, Willy Wonka, Wonka, wrapper. Bookmark the permalink.