I’d like to start off by looking at Hubba Bubba’s A&W Root Beer flavor.  It’s great to see this as a gum flavor again as it was famously part of Amurol’s liquid-filled gum lineup from the early 1980’s:

The new release is a soft chunk bubblegum, unlike its liquid-filled predecessor.  The new wrapper features the current A&W stylized logo as well as the Hubba Bubba beverage style packaging:

Here’s a look at both the 1980’s Amurol A&W wrapper as well as the new Hubba Bubba version:

A&W is a natural brand to find its way into the world of confection and I have a few other pieces in my collection from previous A&W candy releases.  The first is from Ferrara Pan: 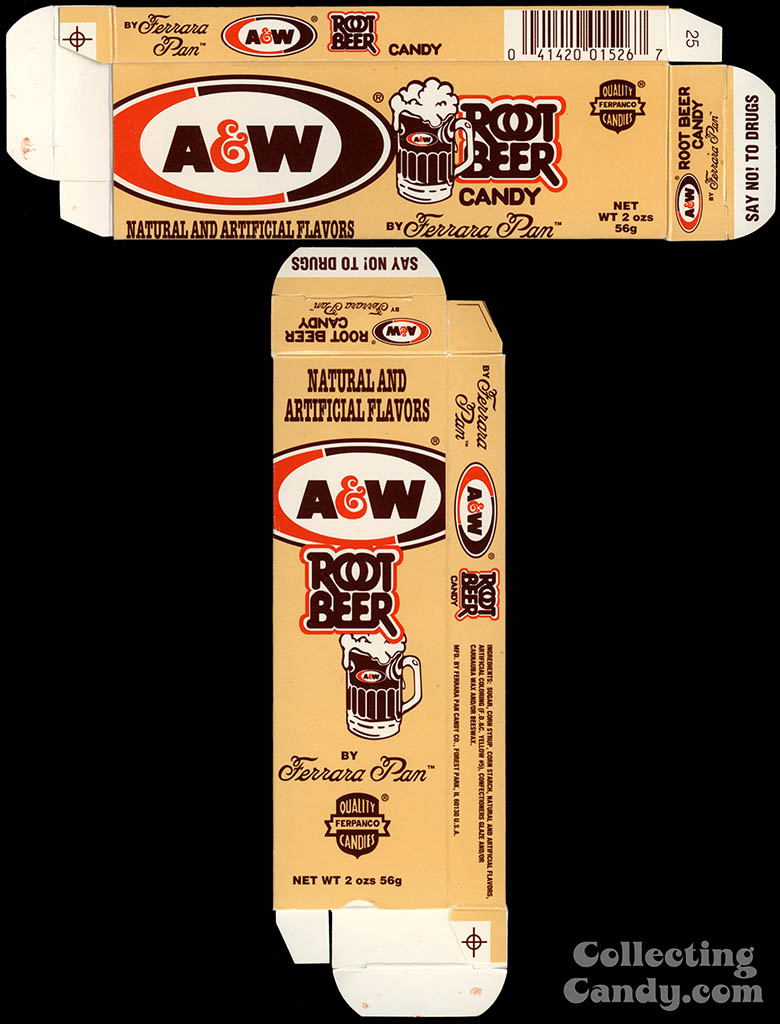 Next up are a pair of individual candy wrappers featuring the A&W brand.  The first would have likely held a classic root beer barrel hard candy: 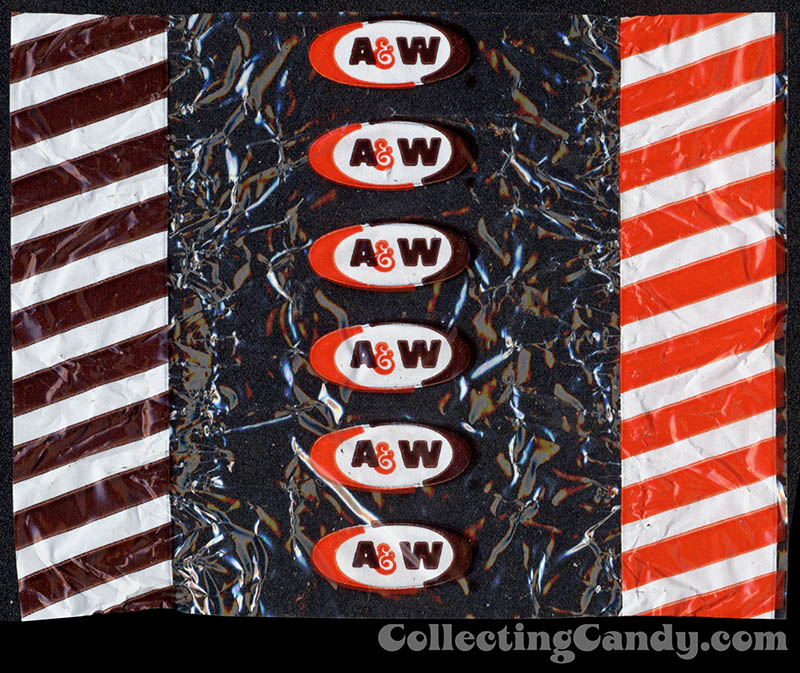 This next comes from Glenn Candies – folks best known for their wax confections like wax lips and their Wowee Whistles.  Unlike the other pieces I’m showing today, which feature the A&W Root Beer flavor, this one is for an A&W Cream Soda-flavored treat:

I would like to note that Brach’s has released A&W branded root beer barrels candy in recent years, though I have none in my collection.

The last piece of A&W candy I have to share today is a root beer flavored lollipop that was given out at an A&W restaurant a pal of mine visited a couple of years ago.  While this is a very recent item, the cellophane wrapper sports a 1976 copyright date – so my guess is that these have been produced as an in-store giveaway for decades.  The wrapper features the A&W mascot “Rooty” or The Great Root Bear as he is formally referred to:

Now on to the new release of Hawaiian Punch branded gum!

Hawaiian Punch is a classic fruit drink brand and one I recall fondly enjoying during my youth.   Here are a pair of vintage can labels I have in my nostalgic packaging collection: Similar to the story of Hubba Bubba’s A&W flavor, Hawaiian Punch-flavored bubble gum has seen earlier releases from other manufacturers.  In this case, there was a Hawaiian Punch flavor of Bubble Yum in the early 1990’s.  Here’s a look at the new Hubba Bubba version as well as two different packs of the earlier Bubble Yum variety: 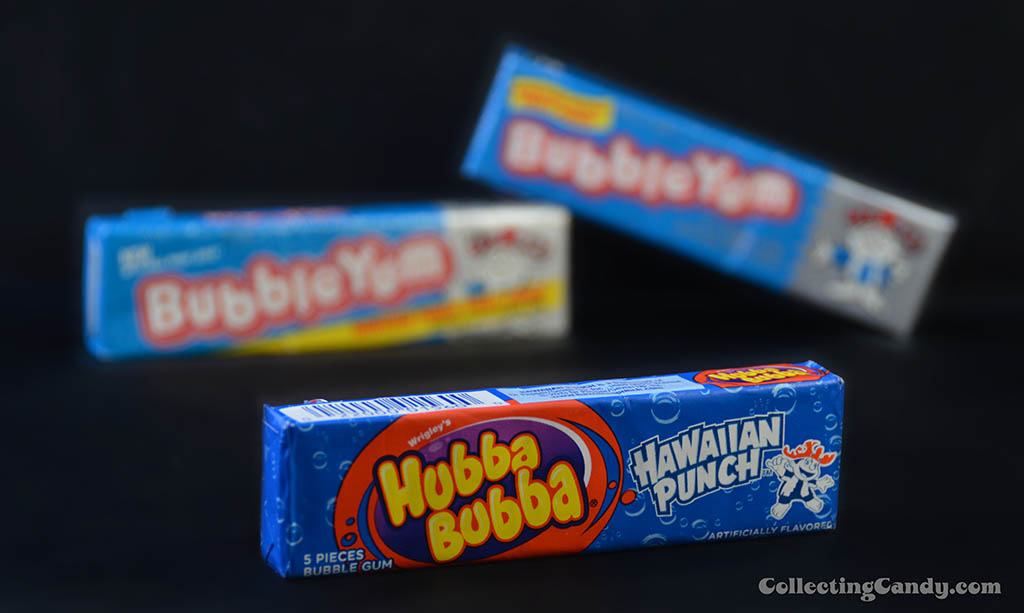 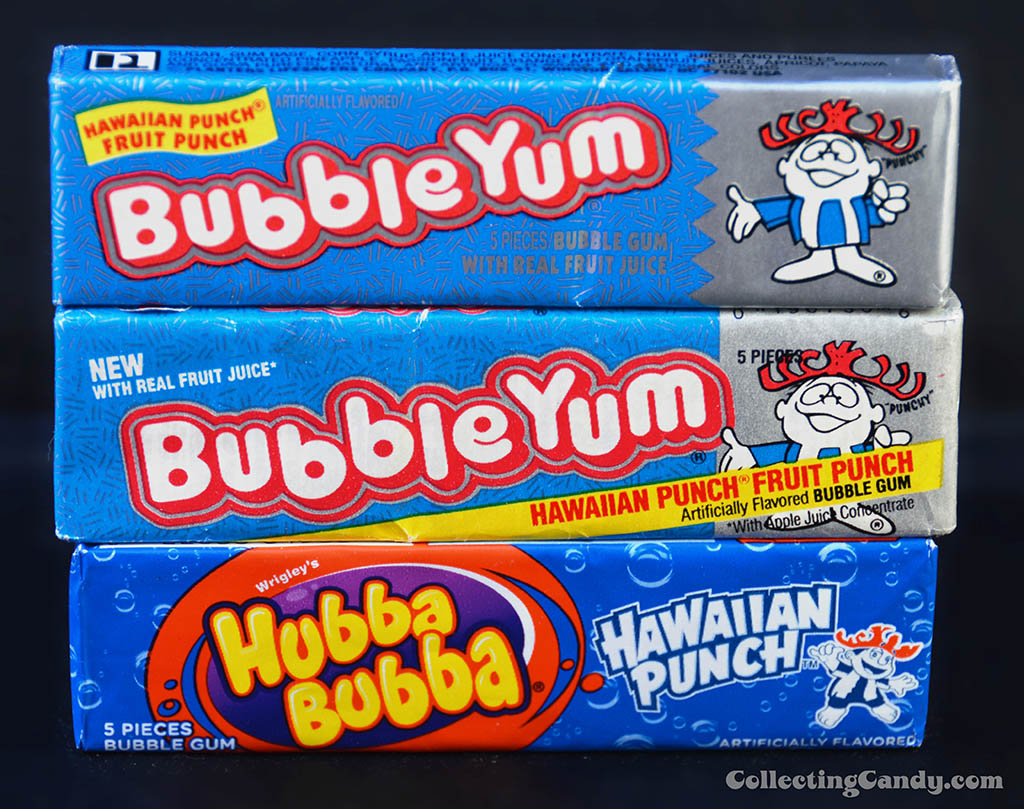 It’s great to see Hawaiian Punch back on a big soft-chunk brand of bubble gum.  The 1990’s Bubble Yum packs are some of my favorites from that era, so this is a welcome return.

Here’s a look at a flat wrapper for one of the 1990’s Bubble Yum packs and the new Hubba Bubba: 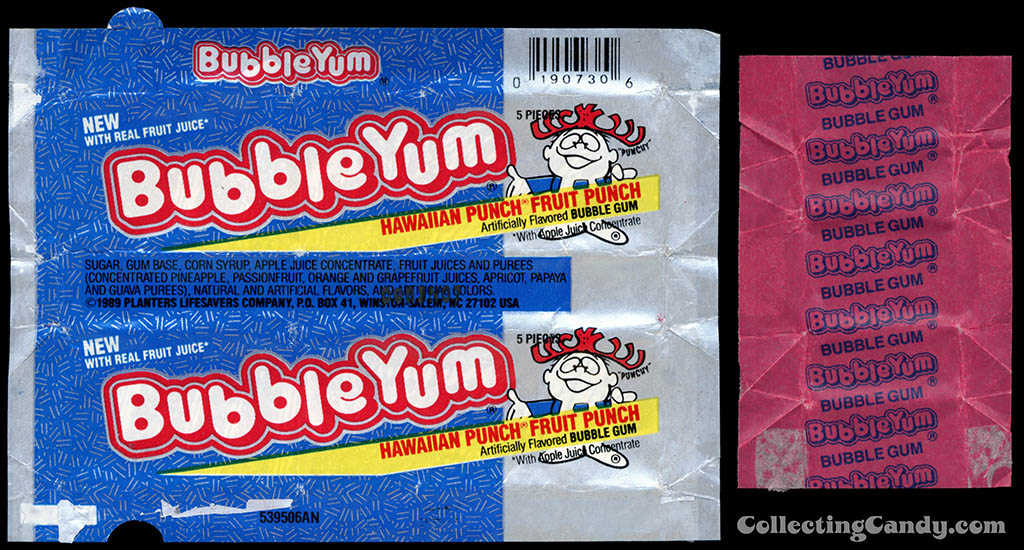 As we covered some of A&W’s other confectionery history, so we can also do with Hawaiian Punch and starting with a bubblegum release from Amurol.

Hawaiian Punch was not a part of Amurol’s early 80’s liquid-filled gum lineup, but as shown here, they did get their hands on the license in the later 1990’s with this candy-coated bubblegum product:

More recently, there have been Hawaiian Punch jelly beans sold under the Brach’s name: 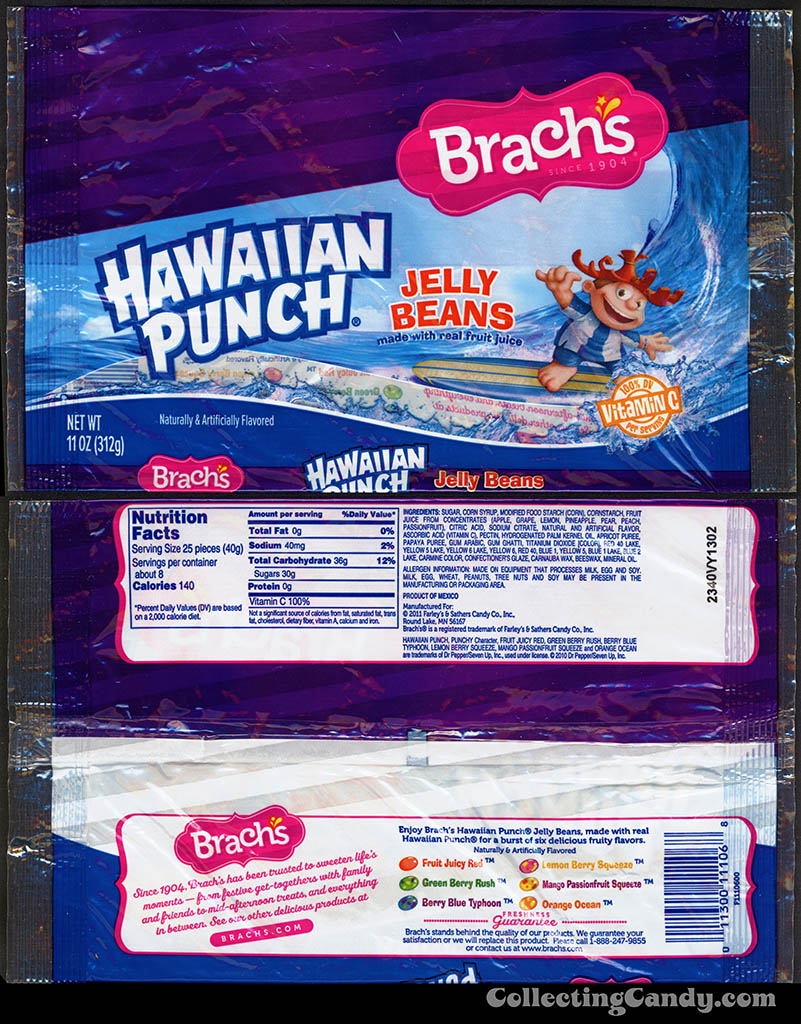 As you can see, Hawaiian Punch has had a few crossovers into candy over the years.  But I promised you a secret history of Hawaiian Punch candy and I saved that golden nugget until the very end.

This last Hawaiian Punch candy item is one that may have never been produced, as the only evidence I have for its existence comes from an ad agency concept board.  I’ve never found this product mentioned anywhere else.

This advertising board [actually a photographic slide of it] was uncovered by my Flickr contact Jordan Smith and posted under his The Pie Shops Collection account – it dates all the way back to the late 1960’s: 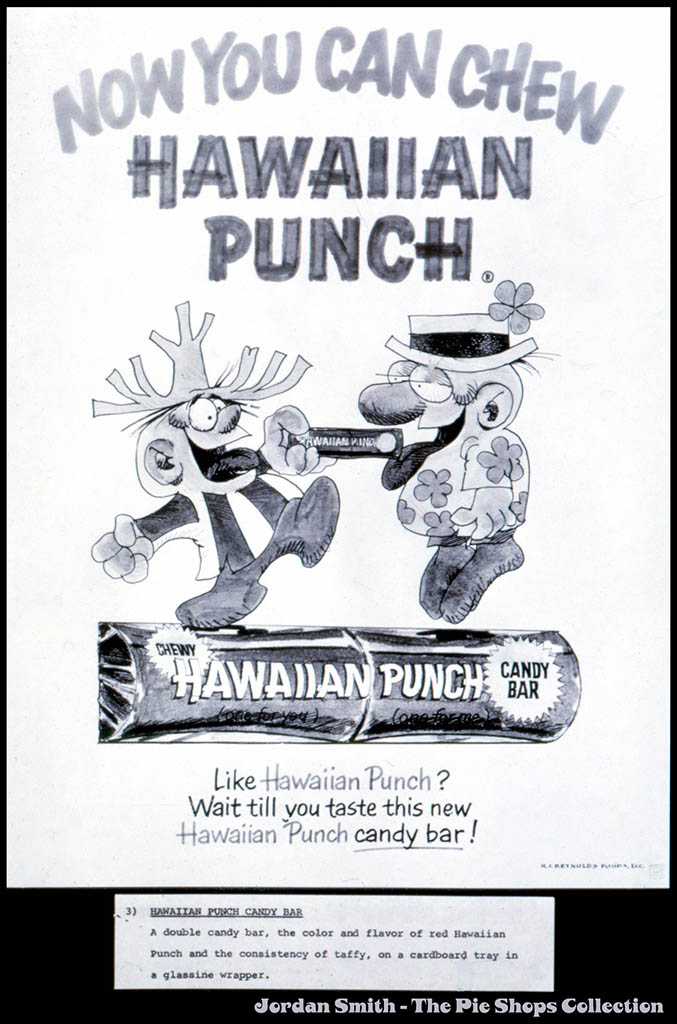 The concept board describes the Hawaiian Punch candy bar as “A double candy bar, the color and flavor of red Hawaiian Punch and the consistency of taffy, on a cardboard tray in a glassine wrapper.”  Sounds pretty cool!

Does anyone remember this unusual Hawaiian Punch candy bar actually coming out?  If you do, leave a comment or e-mail.

And that’s everything I’ve got to share today on the return of A&W and Hawaiian Punch bubble gum!

A New York City based writer, editor and sometimes actor. After spending much of the 1990′s in the comic book business helping tell the stories of Marvel Comics’ X-Men as series editor, he has since split his time between developing his own entertainment properties while still consulting and working on others. Having been described as “the Indiana Jones of lost and forgotten candy”, Jason is one of the country’s premier candy collectors and historians with his discoveries appearing in countless blogs, magazines, newspaper articles, and books. Always happy to share his knowledge and unique perspectives on this colorful part of our popular culture, Jason has consulted with New York’s Museum of Food and Drink and has also been a featured guest on Food Network’s Heavyweights, France’s M6 Capital, and New York’s TheActionRoom.com. My Google Profile+
View all posts by Jason Liebig →
This entry was posted in 1960's, 1980's, 1990's, Bubble Gum, Gum and tagged Amurol, Brach's, bubble gum, bubblegum, candy collecting, candy collection, candy collector, candy wrapper collection, candy wrapper collector, collectible, collecting candy, confectionery, confections, juice, packaging, root beer, sweets, vintage candy wrapper, wrapper, Wrigley. Bookmark the permalink.