From the Darkside to the Tropics – New on Shelves this Week!

Much of my work here on CollectingCandy.com is related to uncovering and celebrating the histories of candy packaging and marketing, but that still leaves room to eyeball the current crop of confectionery goodies and cheer lead them as well.   Since I try to keep an ongoing collection of the current wrappers and boxes, it’s especially exciting when I come across new flavors of standard brands.  Last night, I found four!   So today’s post is dedicated to these four new offerings that I found on shelves this week.

Each of the brands covered in today’s post is pretty big, and each is one I haven’t gotten around to dedicating a big historical post to just yet.  But they’re coming, I promise.

I found all four of these at my local 7-Eleven store, stopping in for one of my routine “candy checks”.  Yes, I often stop at my local stores not to buy anything in particular, but just to see if they’ve stocked some new and interesting bit of candy that I’ve yet to see.  I had been in this 7-Eleven a week earlier and didn’t expect much, but I was pleasantly surprised to find four brand new major offerings.  So lets get to them. 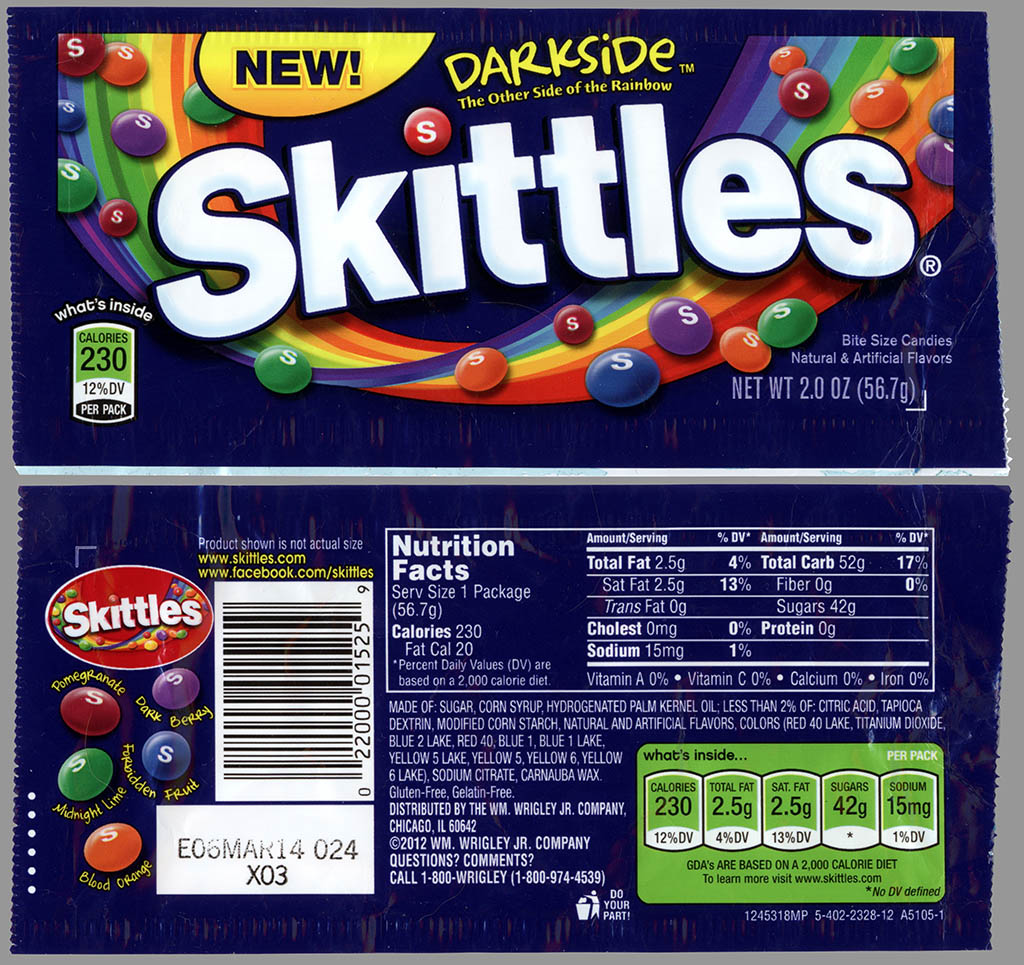 Skittles Darkside is a pretty awesome bit of packaging all around.  The palette used is striking and stands out against the normally bright colors of a Skittles pack.  And then there’s the name – they got me with the name:  “Skittles Darkside:  The Other Side of the Rainbow”.

“The Other Side of the Rainbow”?  Whoa – how cool is that?  Whoever came up with that extra tagline at the end deserves special praise.

Next up is one that I’d been hoping to see since I’d first become aware of it via the official Necco Twitter account back in November.  It’s Necco Wafers Tropical: 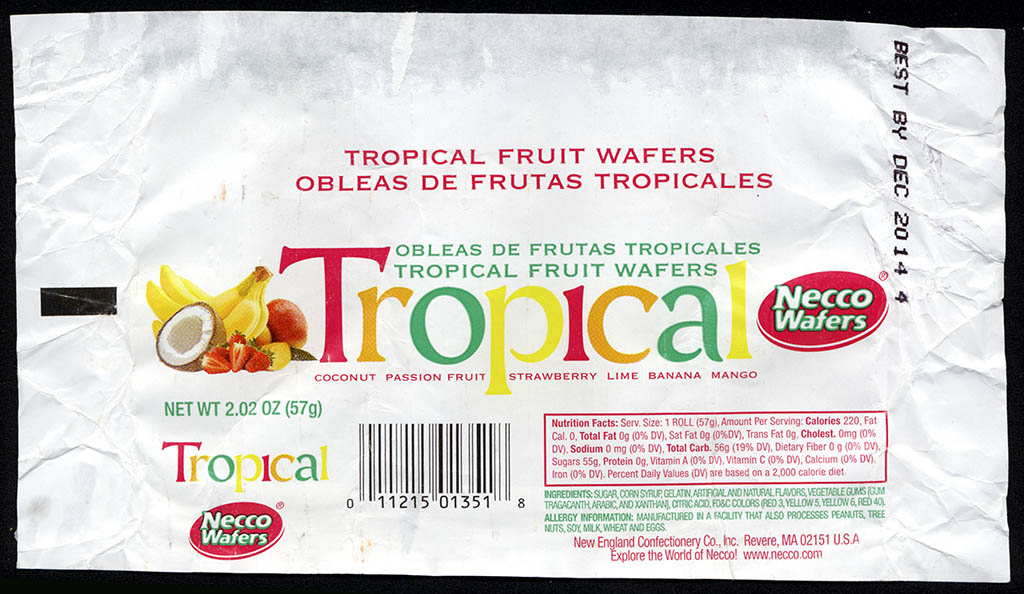 This is a bit of a departure for Necco Wafers packaging, and I think it really works.  If you’re a fan of Necco Wafers standard assortment I think you’ll really dig the more exotic range offered here.

Coming up next is a new flavor of Starburst, Very Berry: 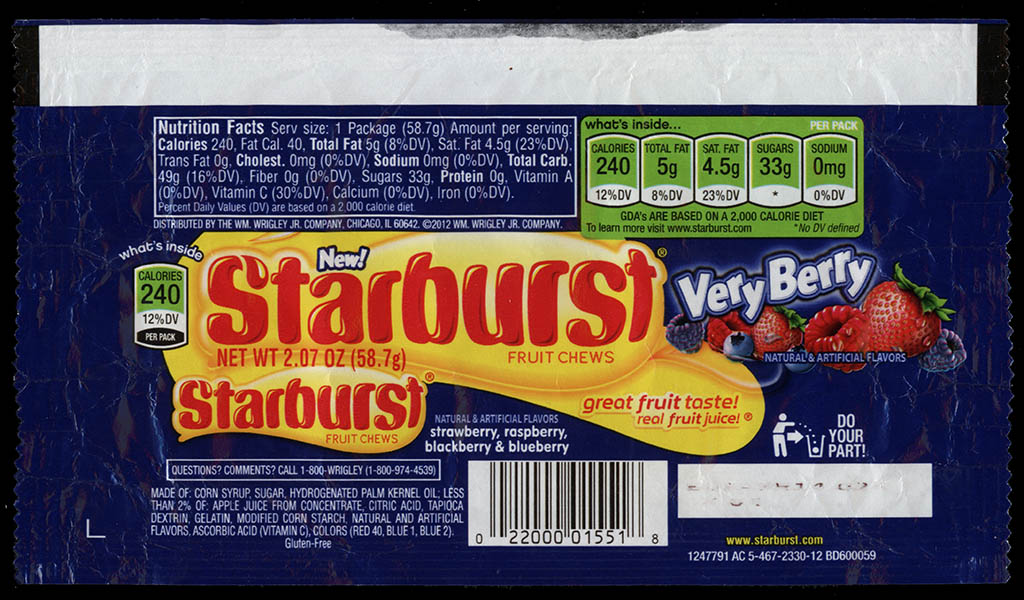 I almost overlooked that this one was new and didn’t pick it up.  You see, I love Starburst, but for some reason the packaging for all the flavors sort of looks the same to me.   Maybe it’s the fact that when it’s wrapped up, the pack is largely yellow and red – I’m not sure.   I would have hated to miss this.  So this is another neat wrapper, and it seems to use a similar palette to Wrigley’s other new offering this week; Skittles Darkside.

My final piece to share today is a bit of a follow-up from a post I shared last month on the return of soda flavored bubblegum, specifically the return of Dr. Pepper Gum. Hubba Bubba is bringing back two actual soda-flavored bubble gum flavors – I first found the Dr Pepper last month, and finally the Orange Crush just last night.  Check it out:

As I mentioned last month in my Dr Pepper post, I hope that Hubba Bubba continues to experiment with different flavors and maybe even more soda-inspired flavors (I’m looking at you Hubba Bubba Mountain Dew!).

And that’s everything for today’s post on the great things I found that are new on shelves this week.  In the coming months I hope to tackle each of these four awesome brands (Hubba Bubba, Skittles, Necco Wafers, and Starburst) in depth and look forward to sharing the many historical pieces of packaging I have for each.

Until then – I’ll see you next time!

Special acknowledgement to digital artist RooKStock, whose free wood texture I utilized for today’s title image background.  Normally I generate that kind of stuff myself, but I was in a pinch today and was able to put his ready-made creation to work.  Thanks to RooKStock for creating it and making it available as a free-to-use resource!

A New York City based writer, editor and sometimes actor. After spending much of the 1990′s in the comic book business helping tell the stories of Marvel Comics’ X-Men as series editor, he has since split his time between developing his own entertainment properties while still consulting and working on others. Having been described as “the Indiana Jones of lost and forgotten candy”, Jason is one of the country’s premier candy collectors and historians with his discoveries appearing in countless blogs, magazines, newspaper articles, and books. Always happy to share his knowledge and unique perspectives on this colorful part of our popular culture, Jason has consulted with New York’s Museum of Food and Drink and has also been a featured guest on Food Network’s Heavyweights, France’s M6 Capital, and New York’s TheActionRoom.com. My Google Profile+
View all posts by Jason Liebig →
This entry was posted in Bubble Gum, Mars, Sour Candy and tagged 2012, 2013, candy collecting, candy collection, candy collector, candy wrapper collection, candy wrapper collector, collectible, collecting candy, confectionery, confections, Hubba Bubba, Necco, Necco Wafers, new, packaging, Skittles, Starburst, sweets, vintage candy wrapper, wrapper, Wrigley. Bookmark the permalink.