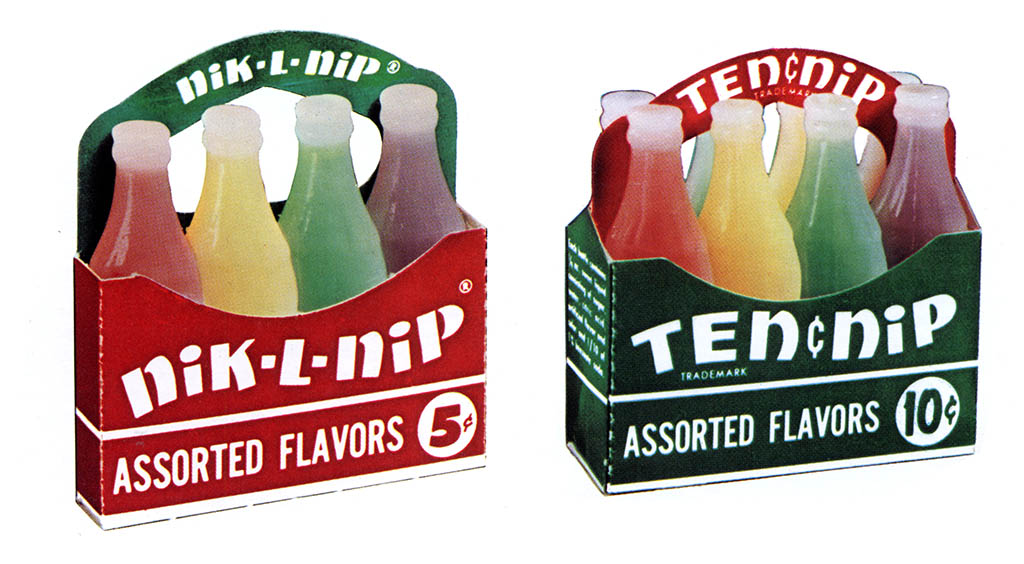 Ah… wax candy.  As a kid, I never really understood the appeal, and frankly I was a bit afraid of the syrupy contents of some of these.  But my friends and classmates seemed to enjoy them, and as I’ve found over the years, they were not alone.   Things like wax lips and Nik-L-Nips are still around today, and still evoke powerful memories for those that had them in their youths.

For today’s piece, I’m going to share a series of trade ads and clippings from the early 70’s era.  I don’t have much in the way of packaging for any of these wax treats.  It seems that, for the most part, the packaging was an afterthought where this category of confection was concerned, and it rarely stood out by itself.  It was the syrup-filled contents that were the stars of the show.  That was certainly the case in the early 1970’s.

By my estimate, this era was a time of intense competition between two of the biggest wax novelty candy manufacturers; Glenn Confections and W&F Manufacturing.  Their ads in the candy trades during this time were full-color and plentiful. Which is good for us today, as I get to use those ads to show you a nice cross-section of what was available.

Before I get to those, I’d like to mention Nik-L-Nips, certainly one of the stars of the wax novelty world.  Originally produced by W&F, they’re still around and are now a product of the Tootsie company.  Tootsie has acquired several of these nostalgic brands over the years, and has used their confectionery power to allow them to live on, where in some cases they might have disappeared.  That’s pretty cool, in my book.

Now let’s take a look at what the world of wax candy looked like circa 1970:

I’m going to start with something you just wouldn’t find today – a wax six-shooter.

Oh, wax guns and bunnies – they really do go together.   I don’t think I need to point out the issue some folks would have with the wax six-shooter seen here.  Simpler times. 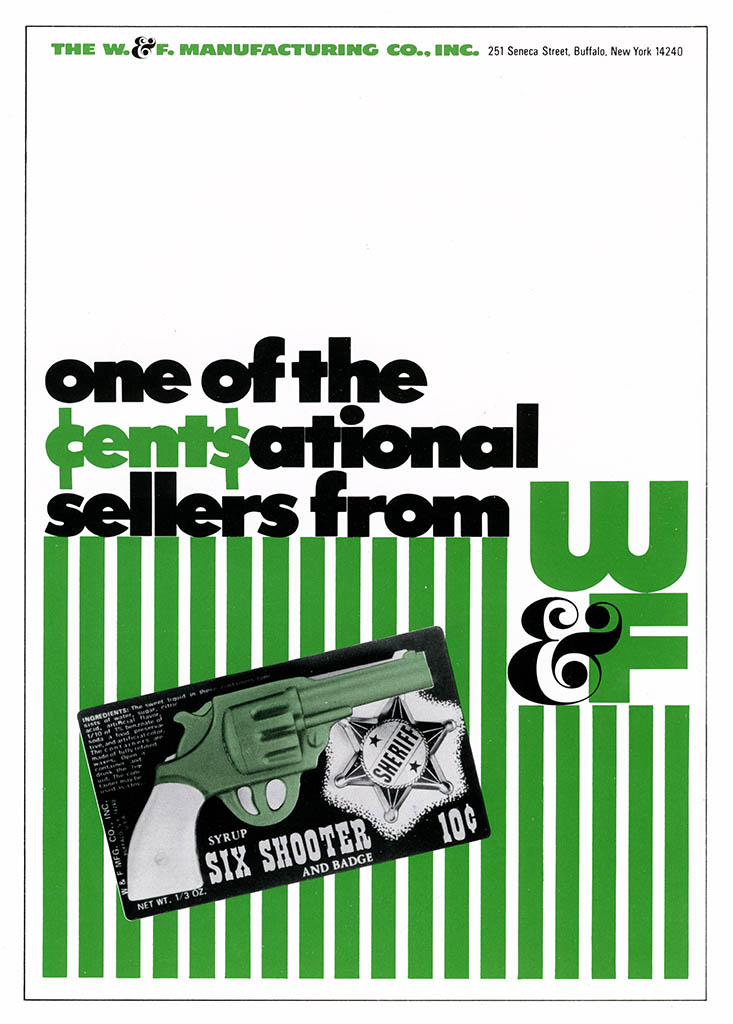 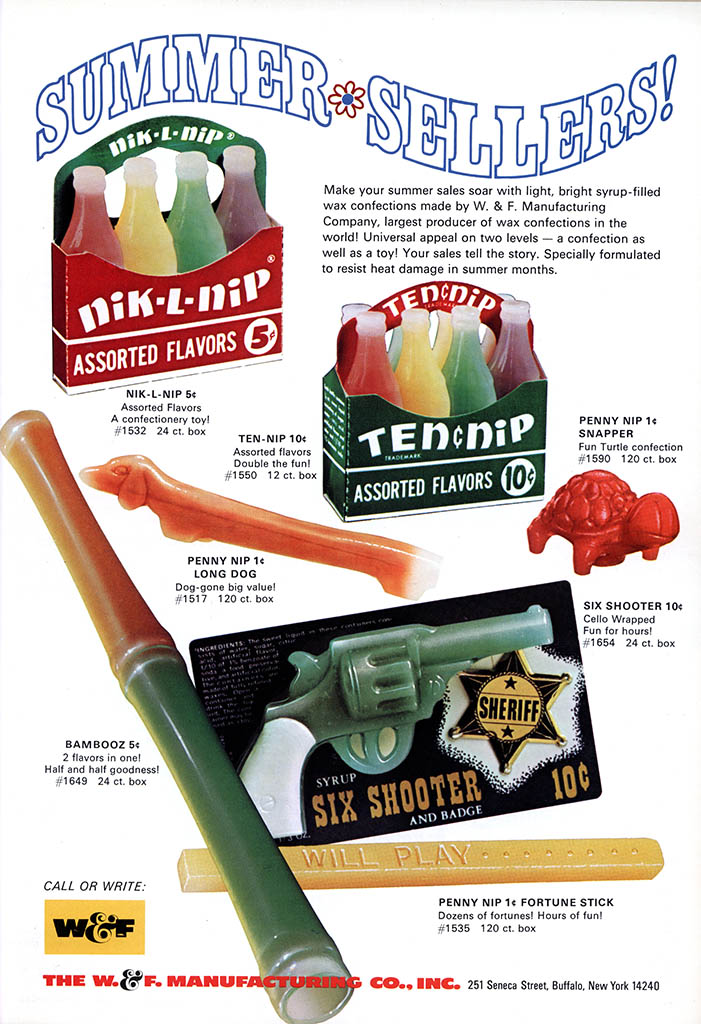 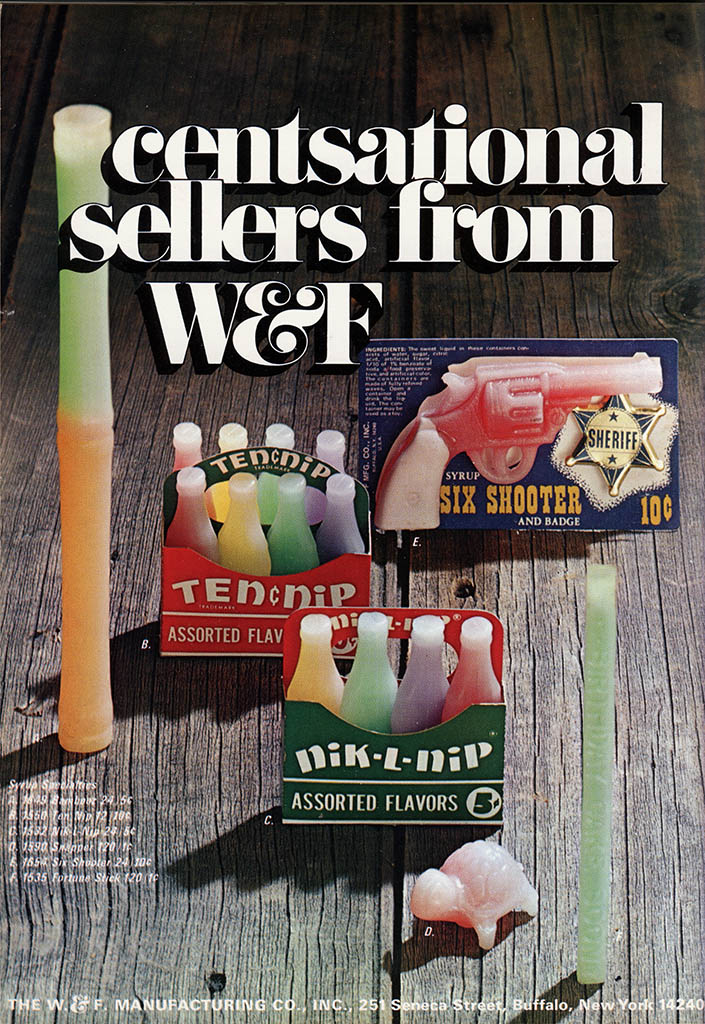 Next up is another W&F trade ad – this time focusing on their Halloween offerings.  In my opinion, Halloween is when these wax treats really shined.  This particular trade ad has some pretty awesome items pictured.  Anyone remember this wax-filled monster?: 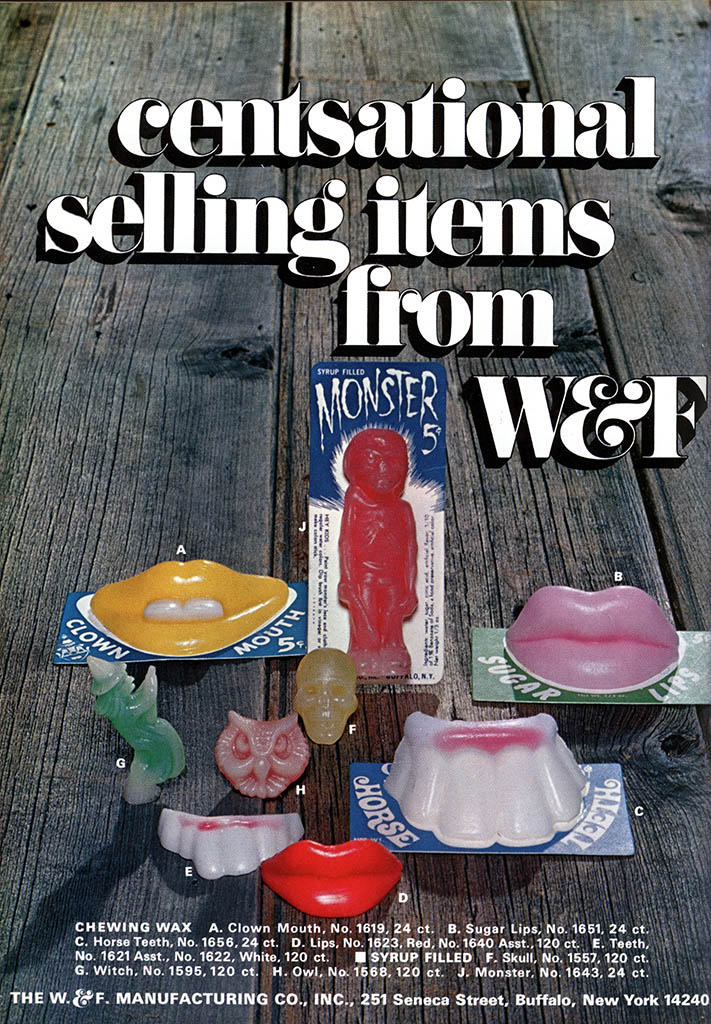 Next up are the trade ads I’ve collected from the other big name in wax confections – Glenn.  I first became aware of Glenn Confections due to their wax whistle, as one was in a scrapbook of gum wrappers that my pal Dan Goodsell had found years ago: 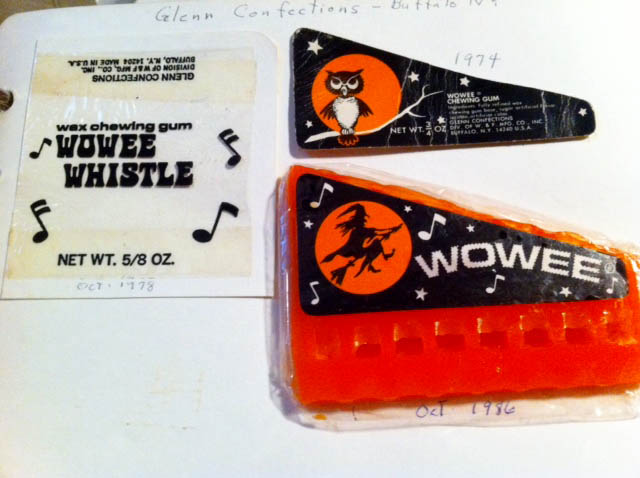 I’ll get back to Wowee, but for now, here’s more of the whole Glenn lineup from the period: 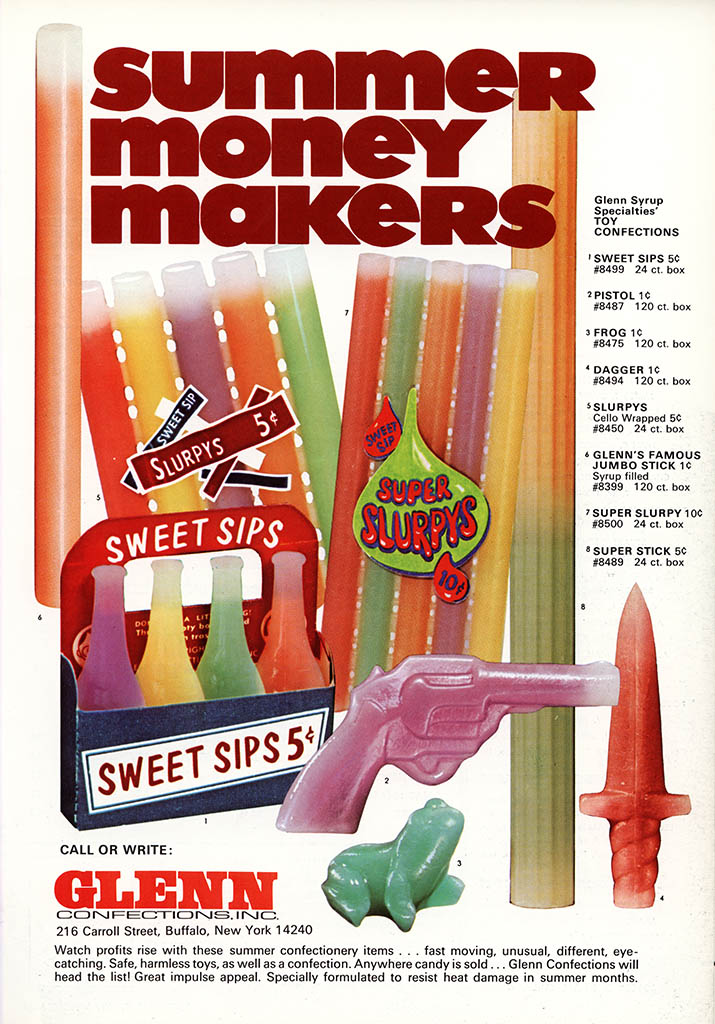 As you can see, Glenn was producing similar items to what W&F was.  I suppose you can’t trademark filling a wax gun with flavored syrup.  And once again, a wondrous mix of waxy forms; daggers and frogs.

This next ad has some really cool pieces that aren’t included in the other ads:  A syrup-filled space gun, a syrup-filled caterpillar (pretty gross for 1971), syrup-filled tools, and Chew-A-Toon, the same wax gum whistle that would be called Wowee for Halloween. 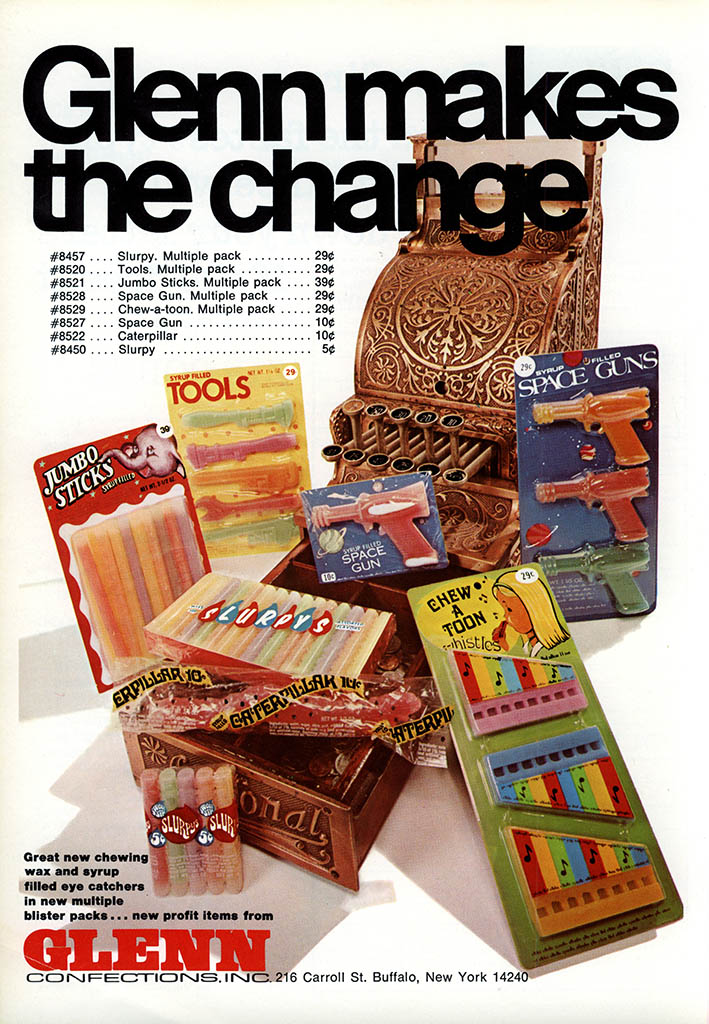 Next up is a great ad featuring Glenn’s Halloween offerings for 1970.  I’ll bet a lot of you will remember these, or ones similar to these: 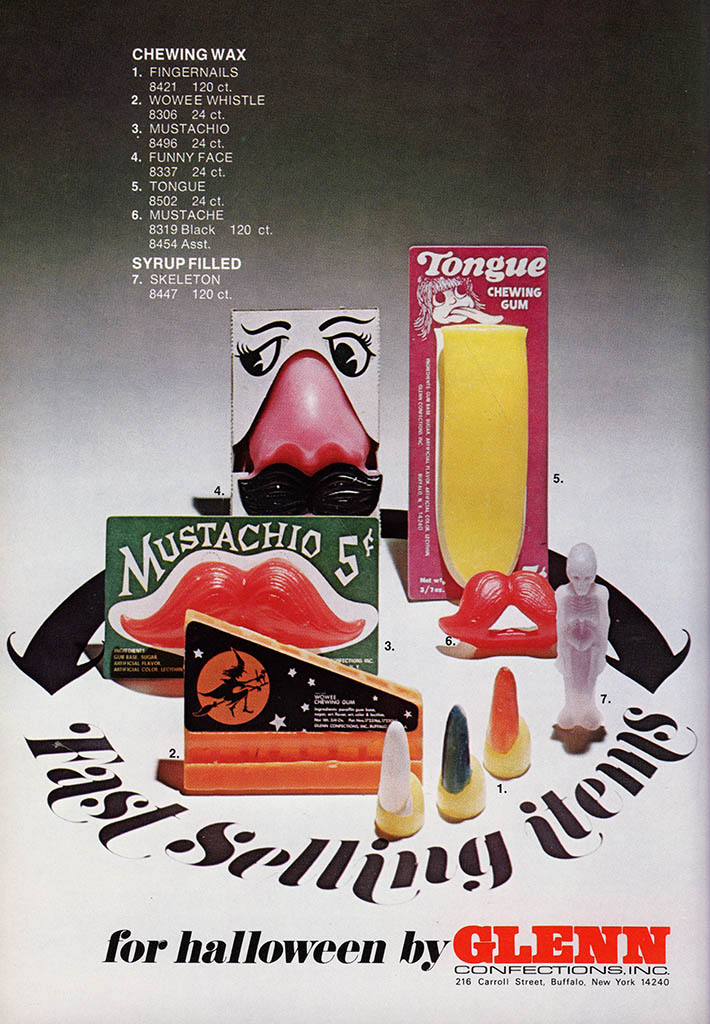 You can see that same Halloween witch whistle in this 1970 trade ad.   According to the annotated date in that gum scrapbook, the one included there is from 1986 – so that design lasted quite a while.  It was clear that they put a lot of promotion into it, as it received a dedicated ad the same year: 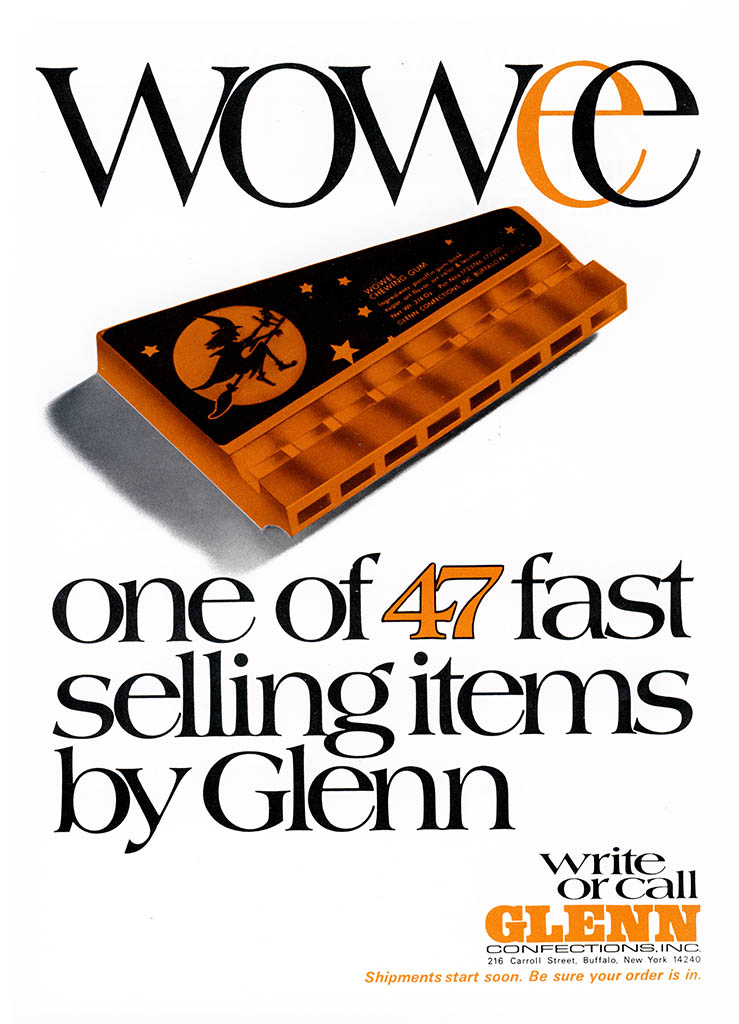 And that’s everything I’ve got to share today on the phenomena that is syrup-filled-wax confections.  I’ll admit that I still don’t quite understand them, but I can’t argue with their appeal – people do love the things.

Honestly, I’m still a bit afraid of that syrup.

14 Responses to Nik-L-Nip and other Wondrous & Weird Waxy Candy!