It’s Our 300th Post – Hooray! And a Behind-the-Scenes Video! 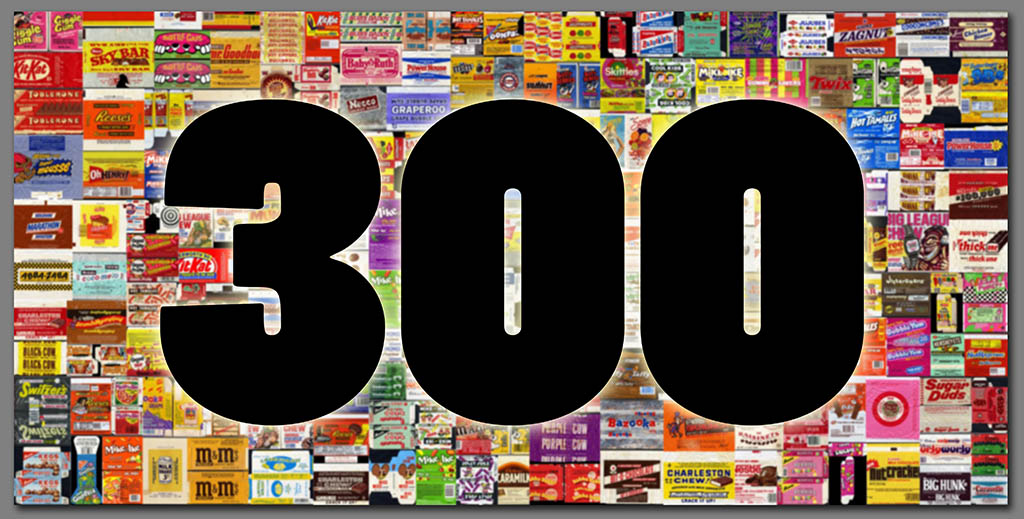 Today is a special one for me as it marks the 300th post for CollectingCandy.com.   When I launched this site just over a year ago, I wasn’t really thinking of getting to 300 – I was just hoping to get through that first month.   But I did, and with the support of visitors and friends I’ve made it all the way to today.  It’s a great pleasure to be able to share so much of my perspective and all of this fun candy-related content with you.

To mark the occasion, I’ve created a behind-the-scenes video showing you some of the things that go into creating a typical CollectingCandy.com blog post.

Before I get to the video, I do want to apologize for being out of commission and not posting anything new for these past two weeks.  My most recent post was on Valentine’s Day, and after that I took a planned few days off, then started working on today’s video.   I wanted this post to be #300 and it just took a lot longer than I had planned.

During these last two weeks, I celebrated a birthday (hooray again!) and spent a lot of time teaching myself FinalCut ProX, and Motion5.  Those two pieces of software helped me make today’s video what I wanted it to be.  My results might still be a little rough around the edges at times, but I hope you’ll bare with me as I plan to make short videos a somewhat regular feature here on the site.   I learned a lot these past two weeks and I hope to apply that education to make future videos even better.

So without further explanation, here is my video segment for CollectingCandy.com’s 300th post [running time is just over 8 minutes]:

I utilized two sort-of-candy-related 20-second music clips in that video from songs and bands that I really dig.   They’re Almond Joy by Har Mar Superstar and Candy by The Presidents of the United States of America respectively and I think they’re pretty fantastic.   You might dig them too , so I’ve provided a quick link if you want to check them out below.

A New York City based writer, editor and sometimes actor. After spending much of the 1990′s in the comic book business helping tell the stories of Marvel Comics’ X-Men as series editor, he has since split his time between developing his own entertainment properties while still consulting and working on others. Having been described as “the Indiana Jones of lost and forgotten candy”, Jason is one of the country’s premier candy collectors and historians with his discoveries appearing in countless blogs, magazines, newspaper articles, and books. Always happy to share his knowledge and unique perspectives on this colorful part of our popular culture, Jason has consulted with New York’s Museum of Food and Drink and has also been a featured guest on Food Network’s Heavyweights, France’s M6 Capital, and New York’s TheActionRoom.com. My Google Profile+
View all posts by Jason Liebig →
This entry was posted in 1970's, Boxed, Bubble Gum, Gummies and tagged Angry Birds, bubblegum, candy, candy collecting, candy collection, candy collector, candy wrapper collection, candy wrapper collector, collectible, collecting, collecting candy, confectionery, confections, Leaf, packaging, sweets, vintage candy wrapper, wrapper. Bookmark the permalink.