Catching Up With CurlyWurly! 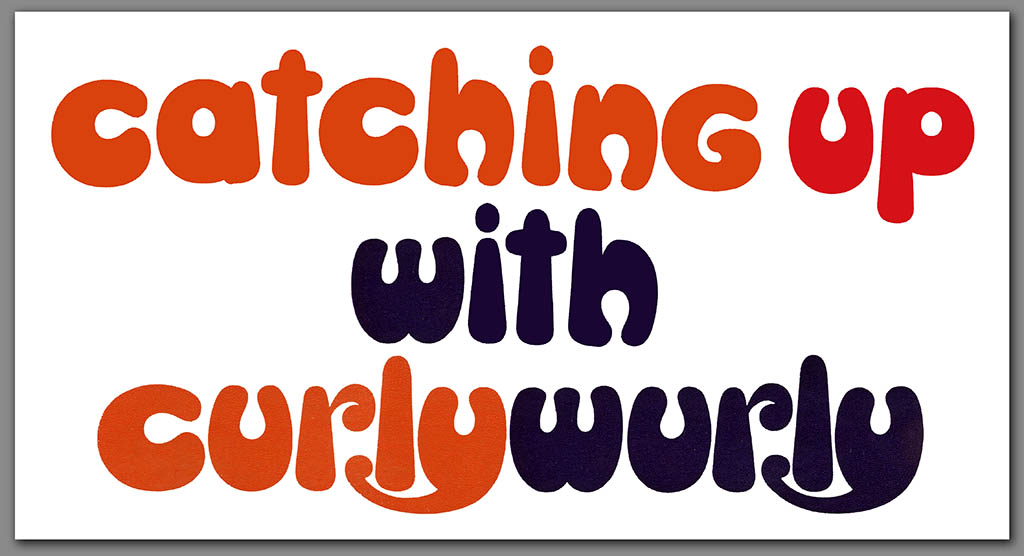 Over the last two posts I’ve focused entirely on Curly Wurly – first with the CurlyWurly Club Kit and then on the saga of the American CurlyWurly.  Today I’ll be wrapping up my CurlyWurly coverage by catching up with the new CurlyWurly wrappers I’ve picked up since my posts on the topic from earlier this year.

I first posted about CurlyWurly back in my Collecting CurlyWurly entry, and soon followed that up with A Few New Bits.  Today I’ll be sharing a number of important new additions to my CurlyWurly timeline, including one major CollectingCandy.com world exclusive premiere!    Let’s get to the wrappers!

I’m going to start with a pair that originated from Germany.  The first is from the 1990’s.  It should be noted that in Germany, CurlyWurly wrappers retained the classic CurlyWurly logo originally used on wrappers in the 1970’s and early 1980’s.

Next up is a German wrapper from 2005.  I’ve previously shared a similar wrapper from a few years after this one – but wanted to include this anyway, as there are differences:

Next up are a series of pieces from the late 1990’s/early 2000’s period, when the mascot “Curly Wurly” adorned the wrappers:

There’s a fun design element on that 2000 wrapper, and one I thought worth zooming in on: 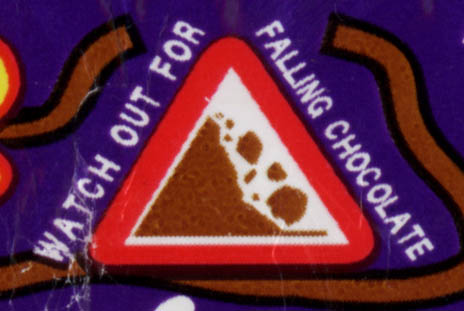 Here’s a 4-pack outer wrapper from this period as well: 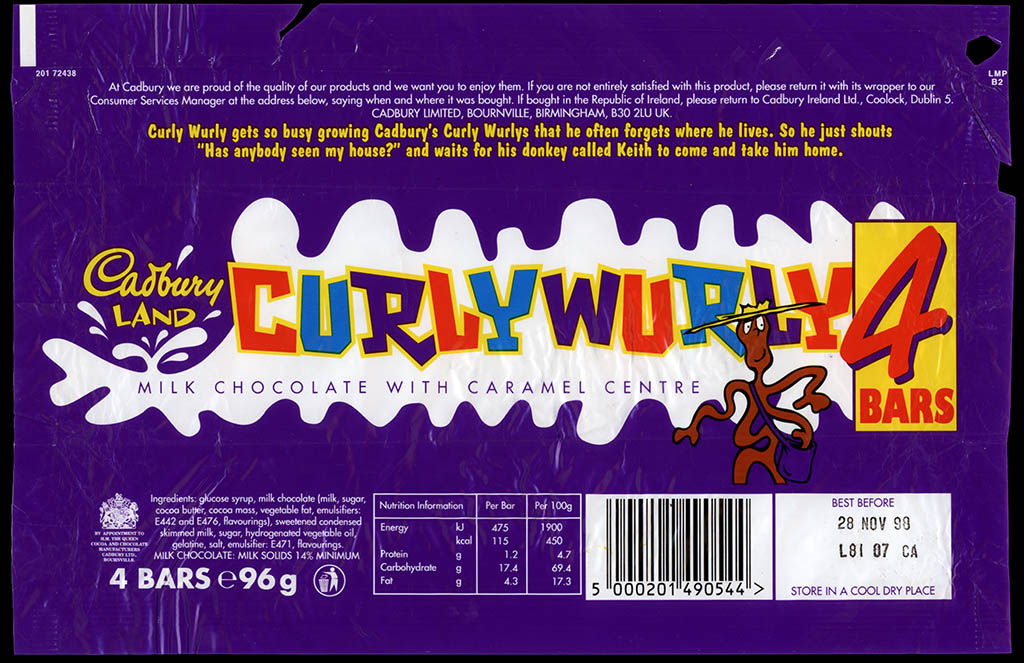 The last piece to share from this period is one I’ve been on the hunt for, for quite some time.  I had bone-headedly missed an eBay auction for one of these packs last year, but finally this year I can claim one for my collection.  It’s for a spin-off product called CurlyWurly Squirlies.   Described as “squirly shoots of CurlyWurly”.  Sounds good to me:

Next up, I’m going to shift geography a bit and move down under to Australia/New Zealand.  I’ve pointed out before that it seems like Cadbury’s division in this region takes to stretching the creative boundaries a little more at times.  And that’s even true with regard to CurlyWurly, as I’m about to show.

First up is a shorter, smaller CurlyWurly bar wrapper, featuring a mascot and logo I’d first come across earlier this year: 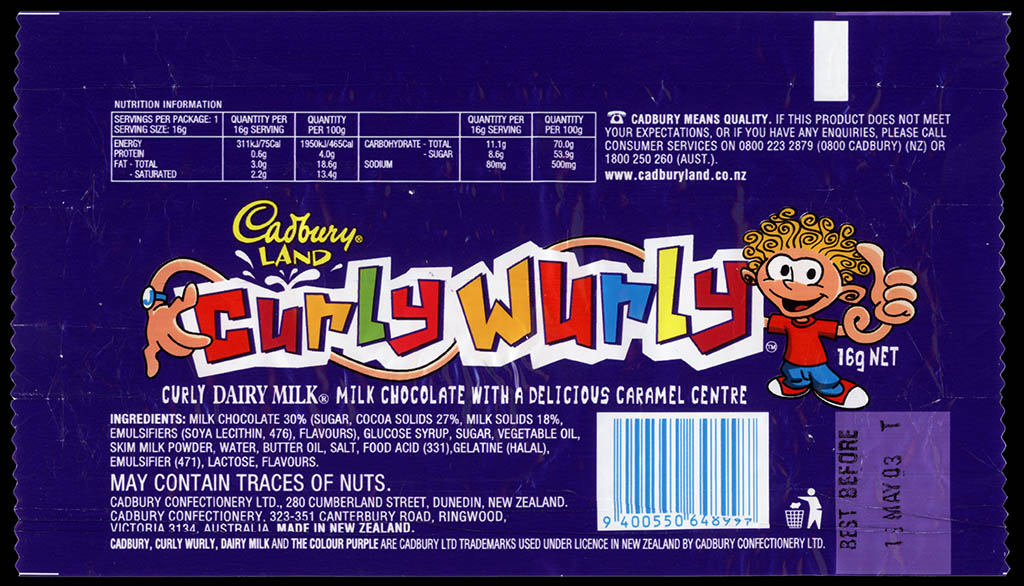 And finally, to wrap up today’s coverage – another pair of wrappers produced out of New Zealand’s Cadbury Confectionery company.

This first one is simply an earlier version of a wrapper that I’d posted in my original CurlyWurly coverage.  I’d previously posted late 2000’s versions which still retained this mascot and logo design, but this one from a decade earlier has a few subtle design differences :

Last, but certainly not least, is my CollectingCandy.com World Premier Exclusive for today.  It’s a wrapper you won’t find any images of (or mentions of) anywhere else online.  For the first time, here’s a wrapper for the Banana-flavoured CurlyWurly, released in 1997 for the Australia/New Zealand markets:

So there it is, something you cannot see anywhere else: a Banana CurlyWurly wrapper!  Pretty wild stuff, don’t you agree?  I’m not sure what I think of the flavor, but I wish I could have tried one when they were around.

One last treat to share.  I went back and pulled together all of the new wrappers and worked them into my original CurlyWurly visual timeline.  It’s not as clean as I’d like it to look, but for now it’ll have to do.  It’s represents 34 different wrappers:

And that’s everything for today’s post and my Catching Up with CurlyWurly.

A New York City based writer, editor and sometimes actor. After spending much of the 1990′s in the comic book business helping tell the stories of Marvel Comics’ X-Men as series editor, he has since split his time between developing his own entertainment properties while still consulting and working on others. Having been described as “the Indiana Jones of lost and forgotten candy”, Jason is one of the country’s premier candy collectors and historians with his discoveries appearing in countless blogs, magazines, newspaper articles, and books. Always happy to share his knowledge and unique perspectives on this colorful part of our popular culture, Jason has consulted with New York’s Museum of Food and Drink and has also been a featured guest on Food Network’s Heavyweights, France’s M6 Capital, and New York’s TheActionRoom.com. My Google Profile+
View all posts by Jason Liebig →
This entry was posted in 1970's, 1980's, 1990's, British, Cadbury, Chocolate and tagged Australia, Australian, British, Cadbury's, candy collecting, candy collection, candy collector, candy wrapper collection, candy wrapper collector, collectible, collecting candy, confectionery, confections, Curly Wulry, CurlyWurly, New Zealand, packaging, sweets, UK, United Kingdom, vintage candy wrapper, wrapper. Bookmark the permalink.