Today I’d like to update my coverage of Cadbury’s CurlyWurly, based on a pair of new acquisitions and a deep search into my own files that turned up a wrapper I hadn’t found when I did my previous CurlyWurly article. 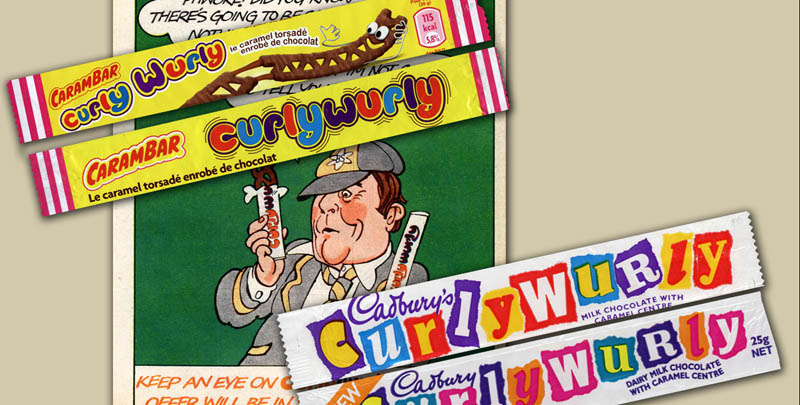 To start, I’ll present this ad that came from the March 10th, 1973 edition of Fleetway’s Lion and Thunder weekly.  I had never seen this one before, but it popped up on eBay and I snagged it: 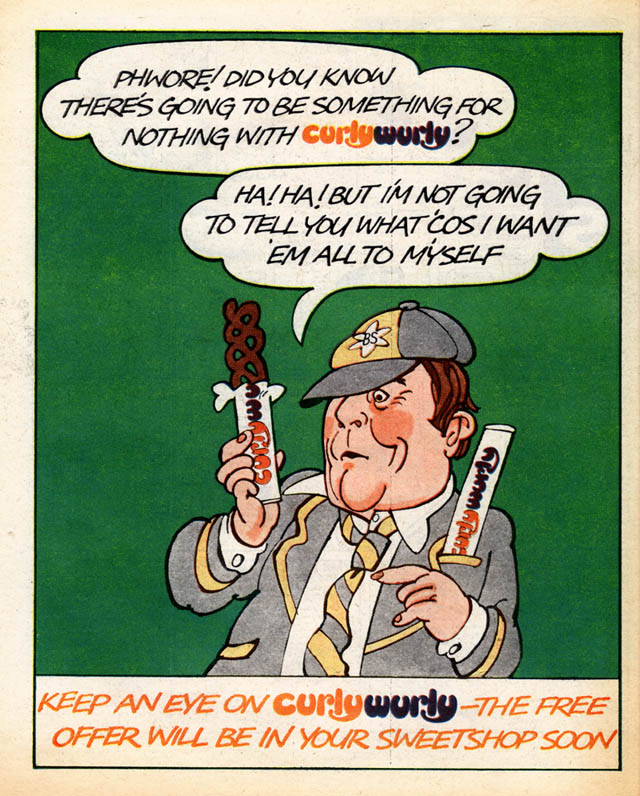 Next up is a French CurlyWurly wrapper that I received from my friend Cybele over at CandyBlog.   I picked up a French Curly Wurly wrapper of my own during a trip to France in November of 2011, and it featured a mascot and design that the 2010 version did not.

Interestingly, the 2010 French version utilized what was, at the time, the brand new logo design adopted by the UK CurlyWurly:

Here are both of the French versions, showcasing the evolution of the wrapper design.  It’s interesting how rapidly the French wrapper switched it up:

Finally, my most exciting new CurlyWurly addition: a late-80’s/early-90’s UK wrapper. It’s a major design evolution that my collection has lacked and one I’ve been hunting for, for some time.    I had been able to track down an early 1990’s New Zealand wrapper, thinking it was identical, but it turns out the design is not quite the same at all.

If you look at the two logos, they do appear the same at first glance – while a closer look shows many odd differences.  It’s as if the New Zealand branch didn’t have access to the original designs, and based their version on a photo.  Oddly, the letter “l” on the 1989 UK version becomes a number “1” on the New Zealand.  Besides that, the colors and typefaces used are inconsistent.

While I thought I knew all about the relationship between the New Zealand wrapper and the UK – acquiring one has shown me I didn’t know quite as much as I thought.  A fun discovery to be sure.

Eventually, I will go back to revise my original CurlyWurly post and graphic timeline, incorporating these new additions.  That’s all for today’s update.  Hope to see you back here tomorrow.

A New York City based writer, editor and sometimes actor. After spending much of the 1990′s in the comic book business helping tell the stories of Marvel Comics’ X-Men as series editor, he has since split his time between developing his own entertainment properties while still consulting and working on others. Having been described as “the Indiana Jones of lost and forgotten candy”, Jason is one of the country’s premier candy collectors and historians with his discoveries appearing in countless blogs, magazines, newspaper articles, and books. Always happy to share his knowledge and unique perspectives on this colorful part of our popular culture, Jason has consulted with New York’s Museum of Food and Drink and has also been a featured guest on Food Network’s Heavyweights, France’s M6 Capital, and New York’s TheActionRoom.com. My Google Profile+
View all posts by Jason Liebig →
This entry was posted in 1970's, 1980's, British, Chocolate, Uncategorized and tagged British, Cadbury, candy, chocolat, collectible, collecting, confection, packaging, retro, sweets, UK, United Kingdom, vintage, wrapper, wrappers. Bookmark the permalink.