The Day After Halloween – and My CountdownToHalloween 2012 Review! 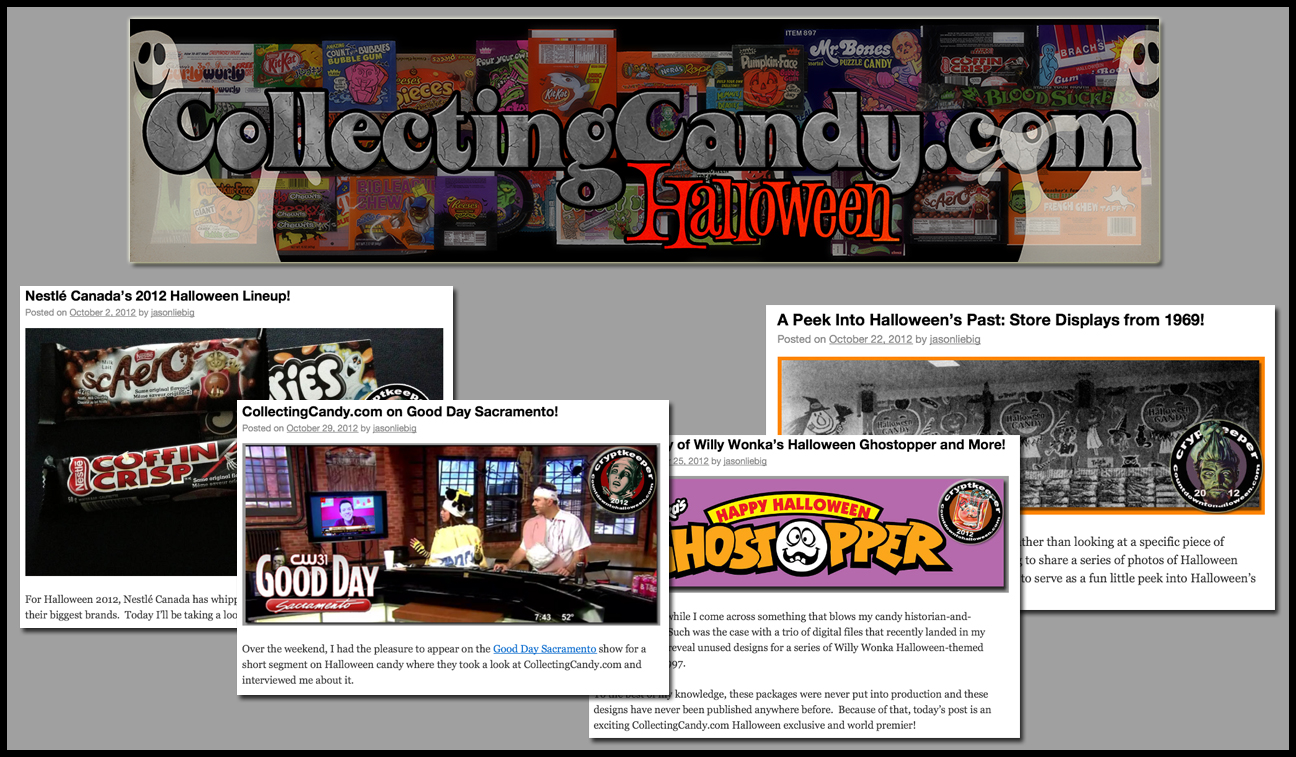 It’s November 1st and the time for talk of Halloween must be put away until next year.  Well, almost!

It was such a big month for the site, I really wanted to take today to reflect on how it went, my favorite posts from the month, and some of the unexpected turns along the way.

I started the month committed to trying to getting a new Halloween-related post up on the site every single day.  I’m proud to say that I managed to pull it off.  In spite of a busy New York Comic Con four-day weekend early in the month, and the wild weather of Hurricane Sandy coming in right at the end, I posted 31 pieces in 31 days.

I fully expected that posting every day was going to be a big job, and it was, but the enthusiastic response I received gave me motivation to buckle down and hit the candy beat every single day.  I couldn’t be happier with how it all turned out.

Thanks to my entering the community of CountdownToHalloween bloggers, I saw lots of new readers come to the site, I’d guess a 20-30% increase over my pre-Countdown traffic.  I’m so glad I was able to join in the Countdown fun that I’ve been following along in past years on other blogs.

The month had a few personal highlights, and a few surprises as well.

Coming into the month, there was one particular piece I was really excited to share.  I’d had it for months, but was holding back on revealing it until Halloween.  That piece was my Fleer Monster Mix packet – one of the neatest vintage pieces I’ve ever come across: 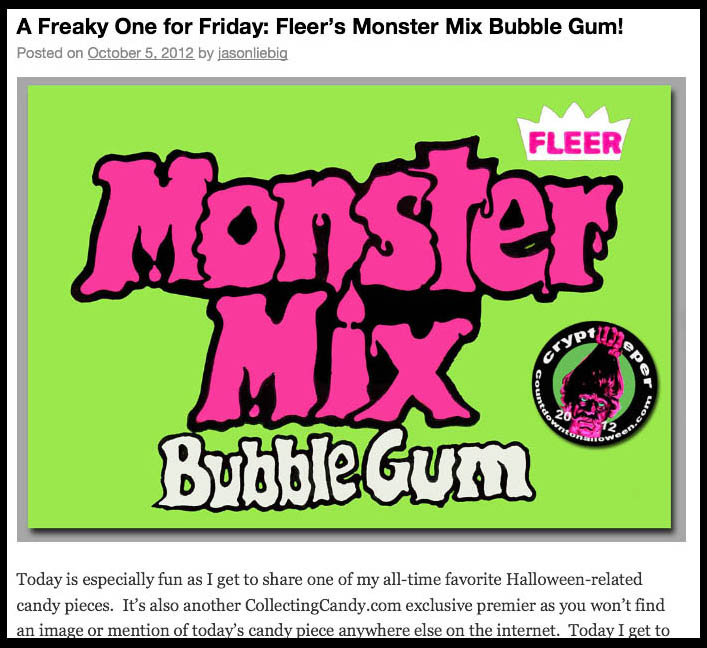 Just before I started the Countdown, a very cool group of packaging popped up in Canada, so I quickly recruited a friend to track the pieces down and send them to me in time to cover them during the month.  Those pieces were the Canadian Halloween Nestle Lineup: 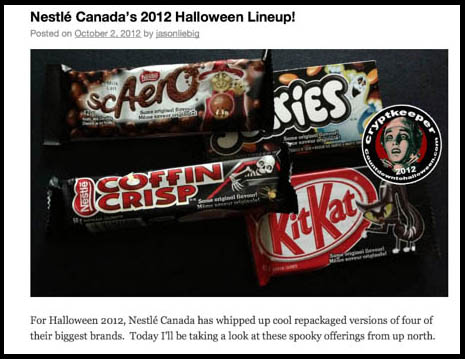 Another piece I was awfully excited to share was about previously unseen and unreleased Willy Wonka Halloween packaging designs from the 1990’s.  In my hobby, few things are as exciting as uncovering things like this: 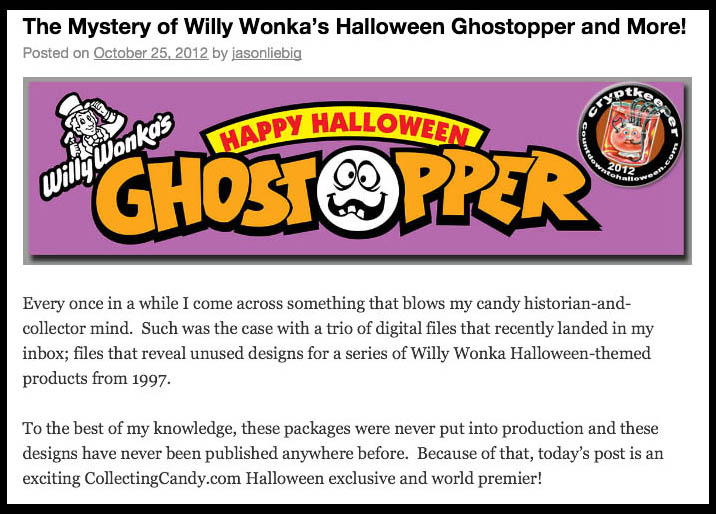 There were certain posts that I expected would garner a good deal of attention, but the one that probably got the most was one I didn’t see coming.   It just goes to show that you never know what is going to pique people’s interests and imaginations.  That post featured old photos of Halloween store displays from 1969 – it was easily my most talked-about post of the month: 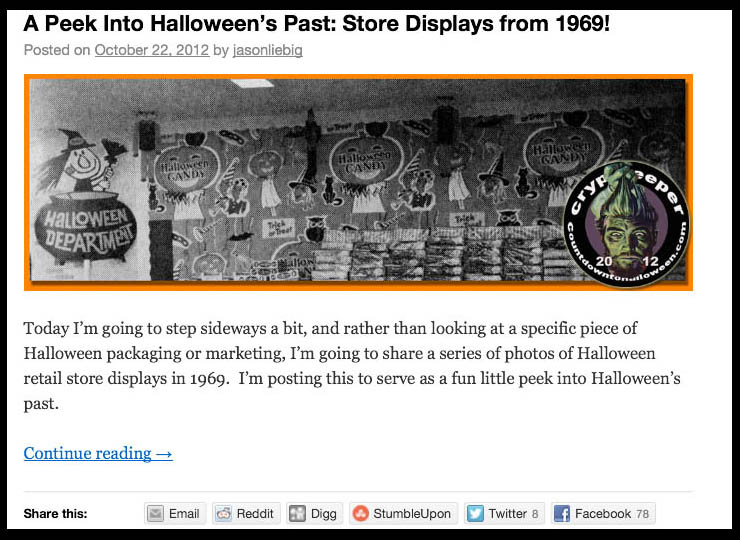 That post brought a lot of new visitors to CollectingCandy.com, and produced one of the most unexpected and delightful turns for our CountdownToHalloween.   That was being invited to appear on the Halloween episode of Good Day Sacramento. 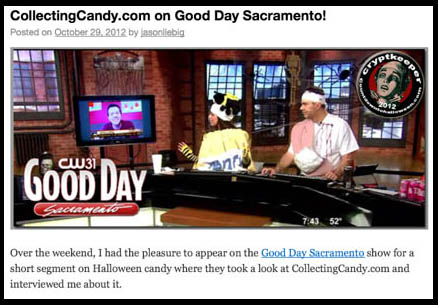 I was a little nervous going onto a morning show to talk about my hobby and the site, but it couldn’t have turned out better.   It was just a lot of fun.

And that’s how I can best sum up my month-long CountdownToHalloween – it was just a lot of fun.  I was a little nervous to undertake it all, and there were days when I wished I could take a day off, but in the end I wouldn’t change a thing about how it all went.

So now, the challenge is to move forward from Halloween and keep finding new things to share and new ways to bring the coolest parts of my hobby to you.   I think it’s going to be a lot of fun.

A New York City based writer, editor and sometimes actor. After spending much of the 1990′s in the comic book business helping tell the stories of Marvel Comics’ X-Men as series editor, he has since split his time between developing his own entertainment properties while still consulting and working on others. Having been described as “the Indiana Jones of lost and forgotten candy”, Jason is one of the country’s premier candy collectors and historians with his discoveries appearing in countless blogs, magazines, newspaper articles, and books. Always happy to share his knowledge and unique perspectives on this colorful part of our popular culture, Jason has consulted with New York’s Museum of Food and Drink and has also been a featured guest on Food Network’s Heavyweights, France’s M6 Capital, and New York’s TheActionRoom.com. My Google Profile+
View all posts by Jason Liebig →
This entry was posted in CountdownToHalloween, Halloween, Holiday and tagged candy collecting, candy collection, candy collector, candy wrapper collection, candy wrapper collector, collectible, collecting candy, confectionery, confections, packaging, sweets, vintage candy wrapper, wrapper. Bookmark the permalink.

1 Response to The Day After Halloween – and My CountdownToHalloween 2012 Review!