You may not know the name Astor Chocolate but you’ve almost certainly seen their products.  They’ll often produce private label chocolate bars for cities and tourist locations – I featured a pair of their lovely Times Square Toys R Us bars back in 2012.  Lately they’ve been partnering up with the FYE retail chain to create some pretty fun offerings but what they’ve come up with now has knocked my socks off; a group of milk chocolate bars featuring crazy flavor combos called Food Fight! 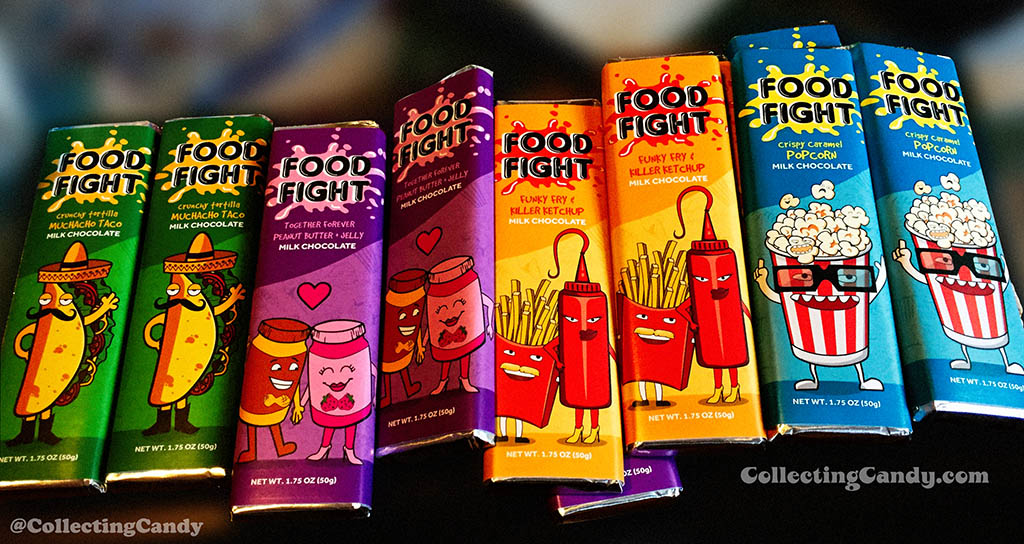 As a candy fan and enthusiast, I’ve tried and lot of different kinds of chocolate bars.  These days, manufacturers add all sorts of bold ingredients into their chocolate, creating some pretty stellar and oftentimes unexpected pairings.  But I’ve never known any company to try to capture the flavor of french fries and ketchup within a chocolate bar.  And somehow, against all reason and expectation, Astor and FYE have succeeded in doing so.

All of these bars are pretty tasty, with the spicy Muchacho Taco and crispy Caramel Popcorn edging out PB&Jelly as two of my standout favorites.  But the experience of the Funky Fry & Killer Ketchup Food Fight bar is one that cannot quite be conveyed with words alone – you have to experience it for yourself.  All I can offer is this; imagine infusing  McDonald’s french fries into a standard chocolate bar with the tangy kick of ketchup occasionally popping in.

It’s weird, it’s unusual, and it’s all kinds of awesome!  Flavor-wise, the Food Fight lineup is something that is a bit bold and unexpectedly unprecedented, which is pretty hard to pull off in today’s chocolate bar landscape.  Not only that, but they sport a quartet of colorful wrappers and appealing mascots,  all of which combines to make these bars a totally fun experience.  And that’s my overall assessment of the latest collaboration between Astor Chocolate and FYE stores; they’re fun!  Here they are: 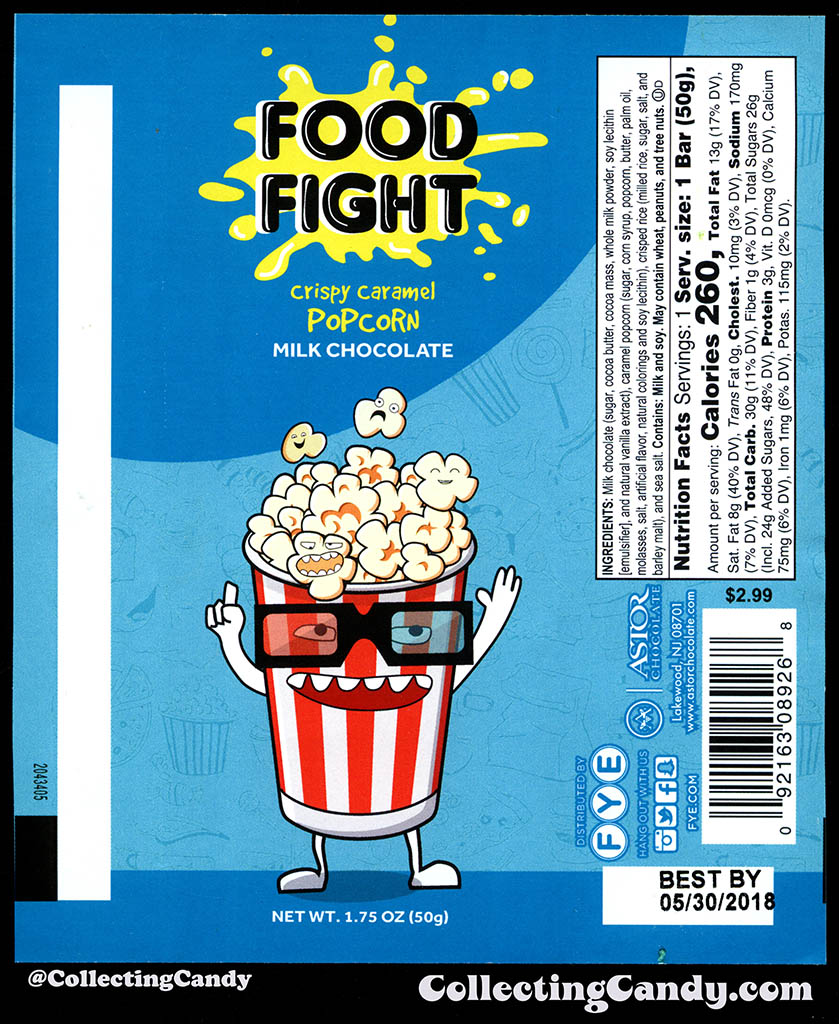 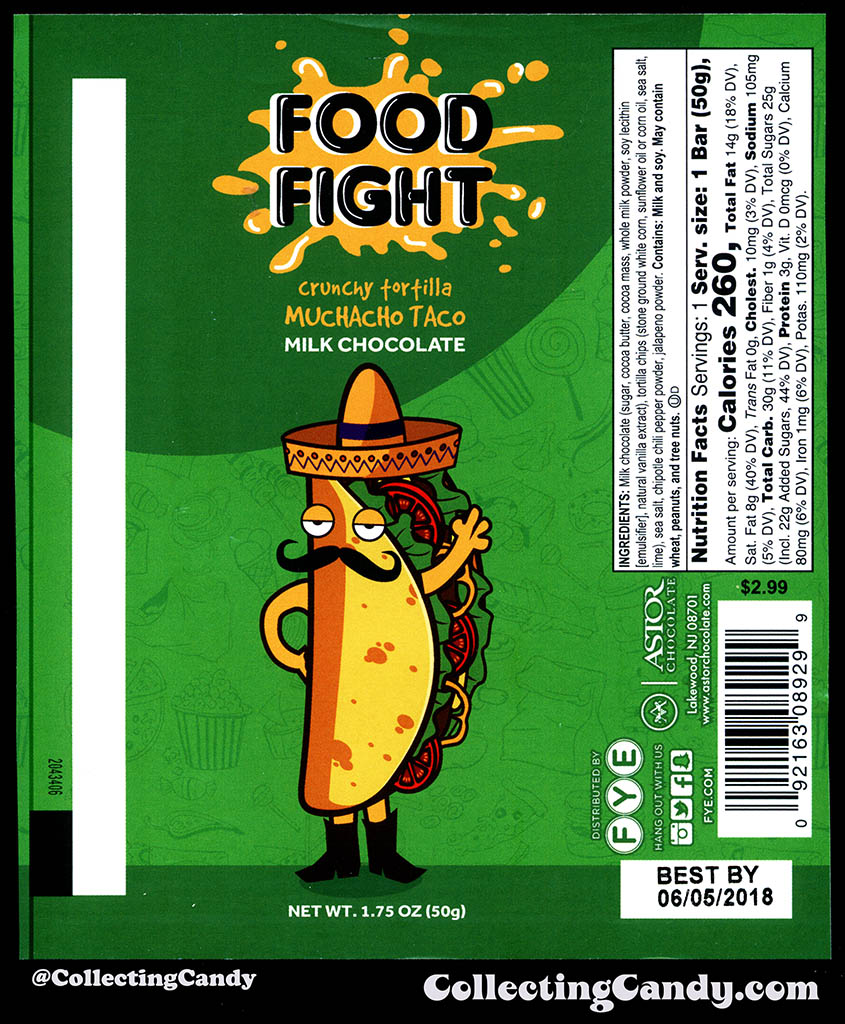 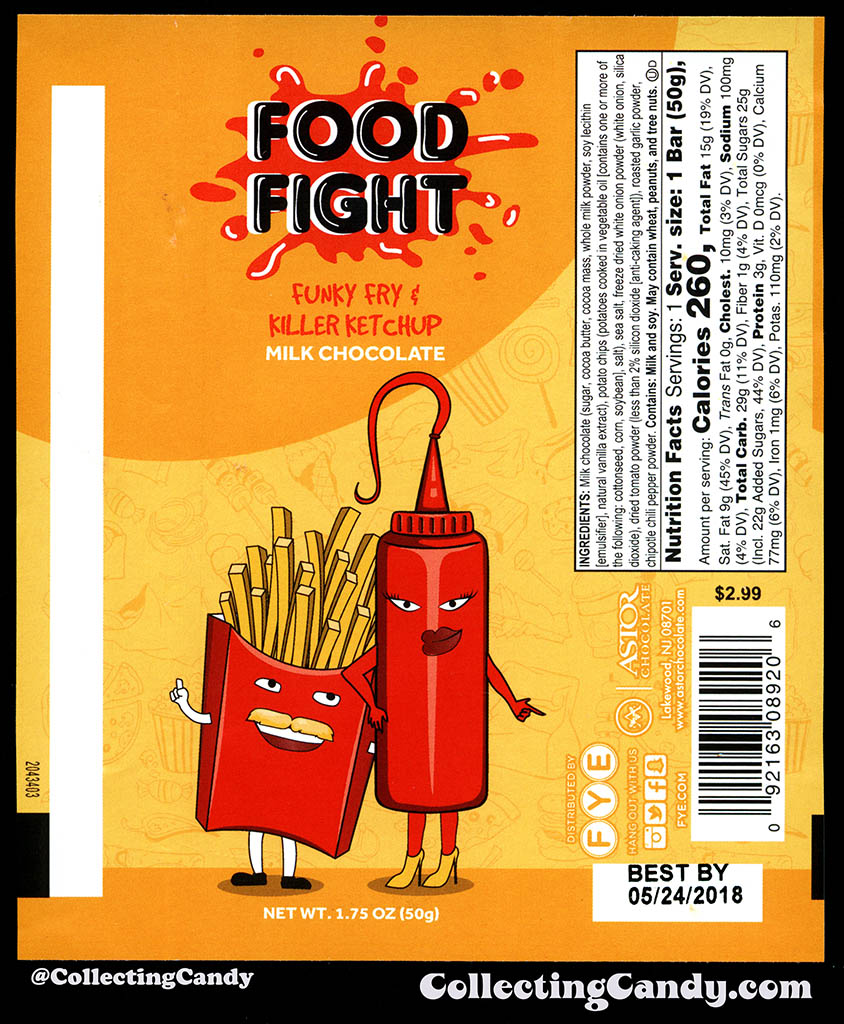 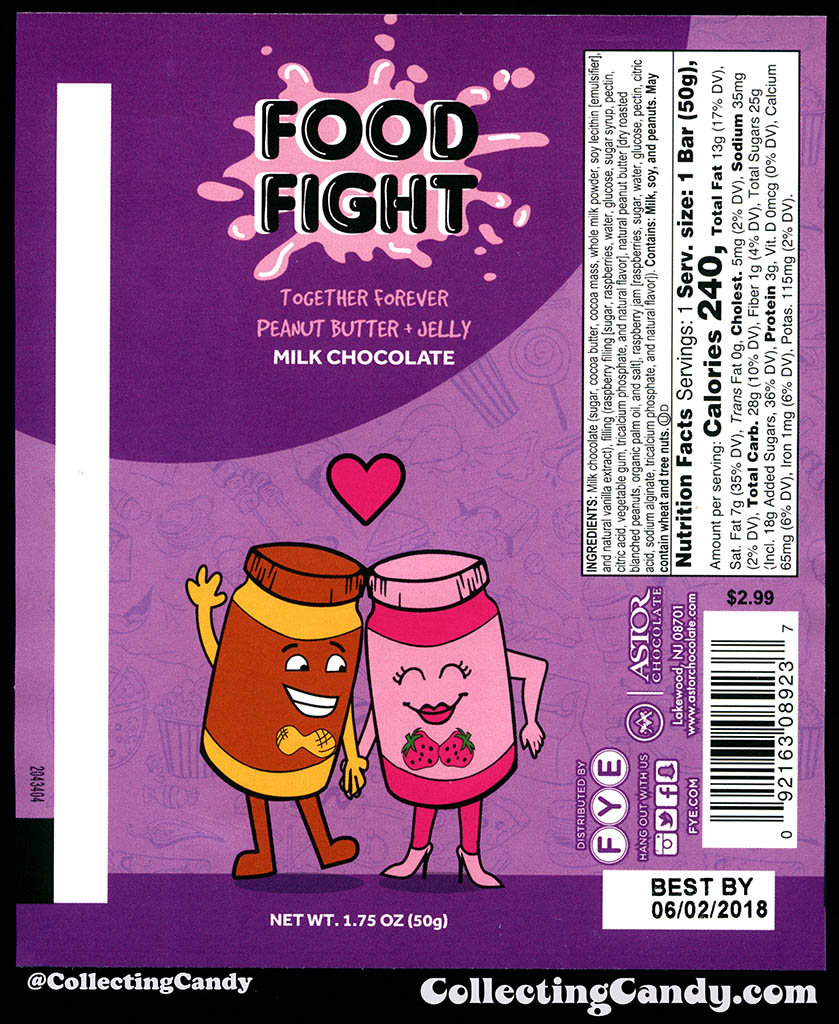 An outstanding assortment at launch.

My hope is that these are successful enough for the creative folks behind them to have the opportunity to add more flavors to the Food Fight mix, expanding the lineup and pushing the boundaries even further.  It’s the kind of fun crazy offerings (with terrific packaging) I love to see companies bringing to stores.  I hope you get a chance to try them.

And that’s everything I’ve got on the FYE’s exclusive new Food Fight lineup and the very first chocolate bar I’ve ever encountered that tasted anything like a McDonald’s french fry!  See you next time! 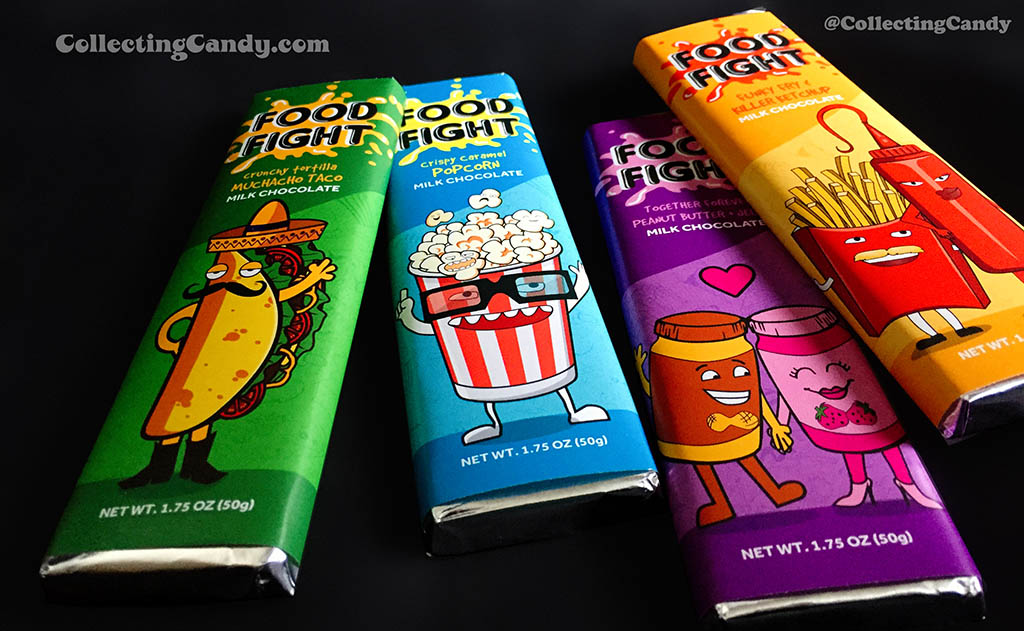 A New York City based writer, editor and sometimes actor. After spending much of the 1990′s in the comic book business helping tell the stories of Marvel Comics’ X-Men as series editor, he has since split his time between developing his own entertainment properties while still consulting and working on others. Having been described as “the Indiana Jones of lost and forgotten candy”, Jason is one of the country’s premier candy collectors and historians with his discoveries appearing in countless blogs, magazines, newspaper articles, and books. Always happy to share his knowledge and unique perspectives on this colorful part of our popular culture, Jason has consulted with New York’s Museum of Food and Drink and has also been a featured guest on Food Network’s Heavyweights, France’s M6 Capital, and New York’s TheActionRoom.com. My Google Profile+
View all posts by Jason Liebig →
This entry was posted in Chocolate, Private Label and tagged candy collecting, candy collection, candy collector, candy wrapper collection, candy wrapper collector, collectible, collecting candy, confectionery, confections, mascot, packaging, packaging design, sweets, vintage candy wrappers, wrapper. Bookmark the permalink.

3 Responses to FYE and Astor Chocolate’s Food Fight! – Featuring the first chocolate bar that tastes like a McDonald’s french fry!!!