Earlier this year, the FYE chain of stores released an exclusive line of deluxe chocolate bars featuring a line-up of current WWE Wrestling favorites.  Make the jump to check them out!

For those that don’t recall, back in 2013 I touched upon another instance of professional wrestling licensed to sell chocolate bars 25 years ago. 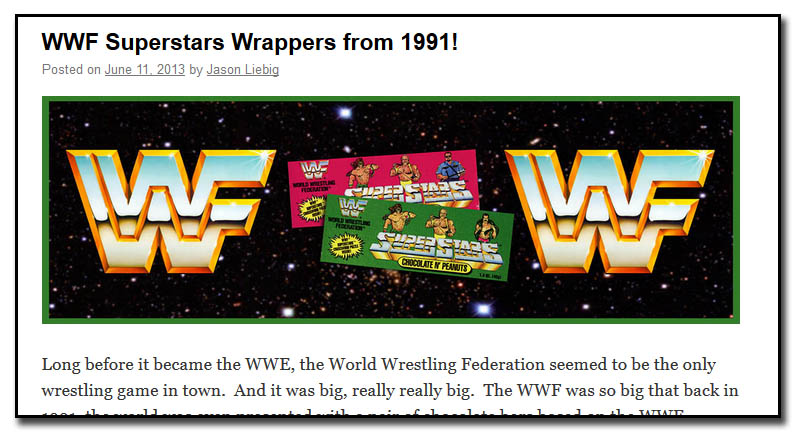 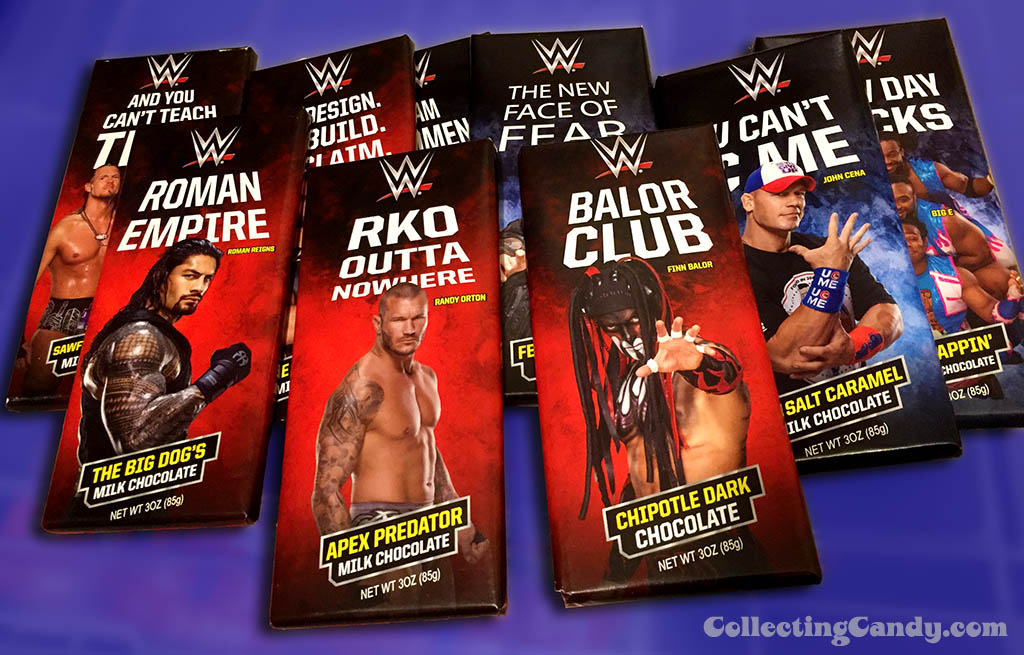 Unlike those bars from a quarter century ago whose variety was limited to “chocolate, peanuts or crispy”, these new bars run the gamut of contemporary tastes, with everything from chipotle dark chocolate to marshmallow to popping candy infused milk chocolate.

Kicking it off with one of the biggest stars in the sport, here is a sea salt caramel bar featuring John Cena:

I’ll confess that I am not a professional wrestling aficionado, so I’m guessing that the characters on these wrappers are heroes and villains (“faces” and “heels” in pro wrestling terms) and that designation is delineated by the color of background they’re standing in front of.  With the prominent character photography being the center of each, this gives the look of the wrappers something akin to a classic trading card.  I dig it. 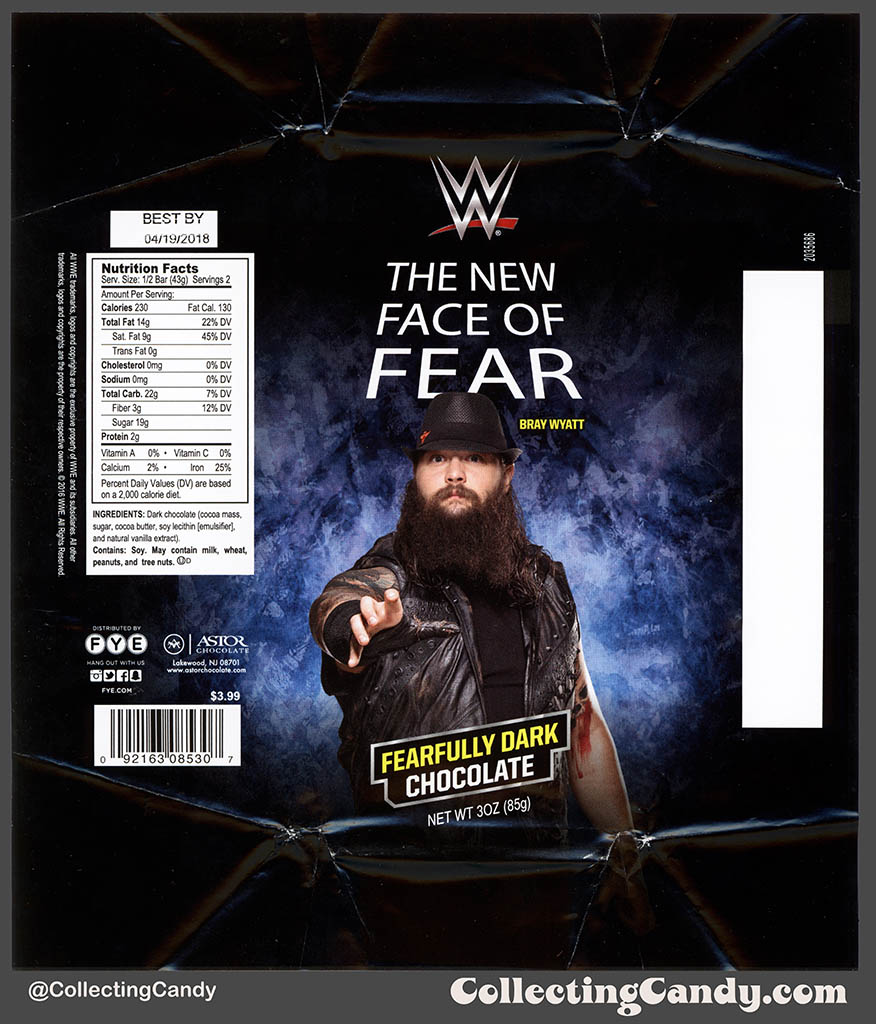 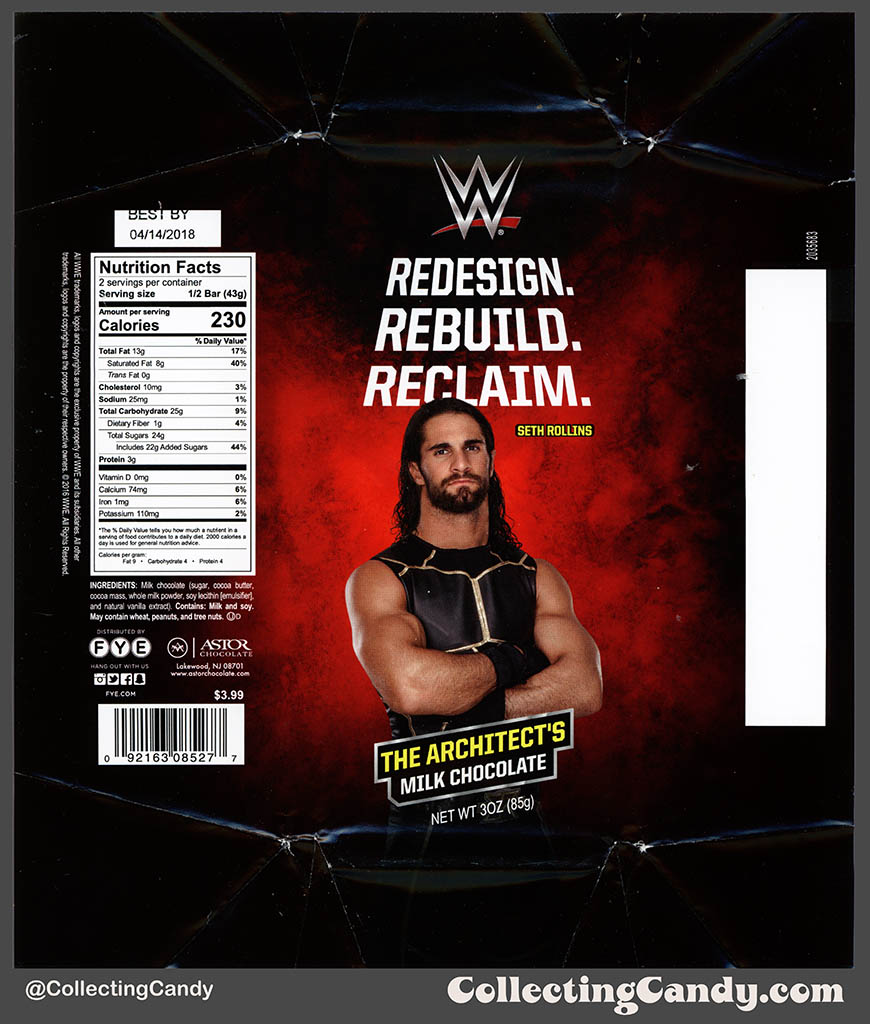 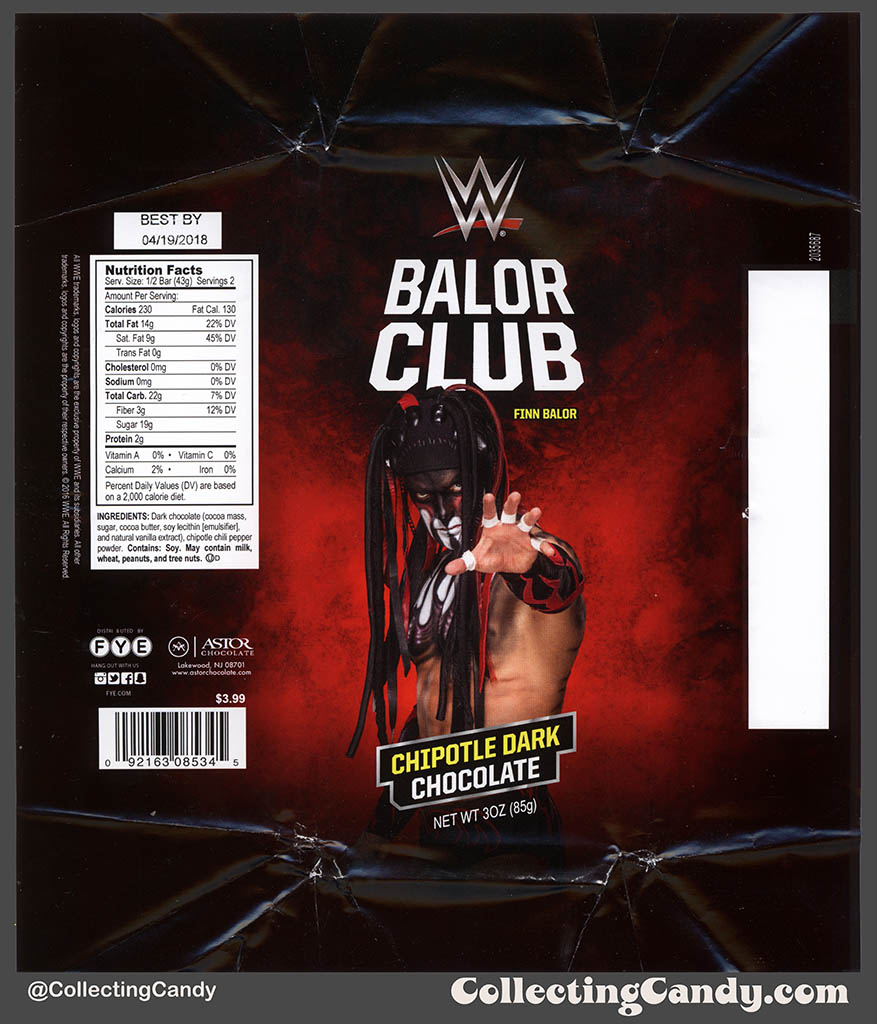 Those bars represent a nice variety of flavors and while they are all well done, my personal favorite is the marshmallow and milk chocolate bar.  At $3.99 these are certainly a premium bar but you get what you pay for as each one is 3 ounces of high quality chocolate from the Astor Chocolate company.

These WWE wrestling stars chocolate bars are FYE store exclusives and I could not currently find them available for order on the FYE website, so if you’re looking to pick up a single bar or a whole set, you’ve got to find an FYE store in-person.  But while you can’t currently order the WWE chocolate bars at FYE online, what I did find on their website was their other fun consumable wrestling tie-in product;  A delightfully-packaged breakfast cereal called BootyO’s. 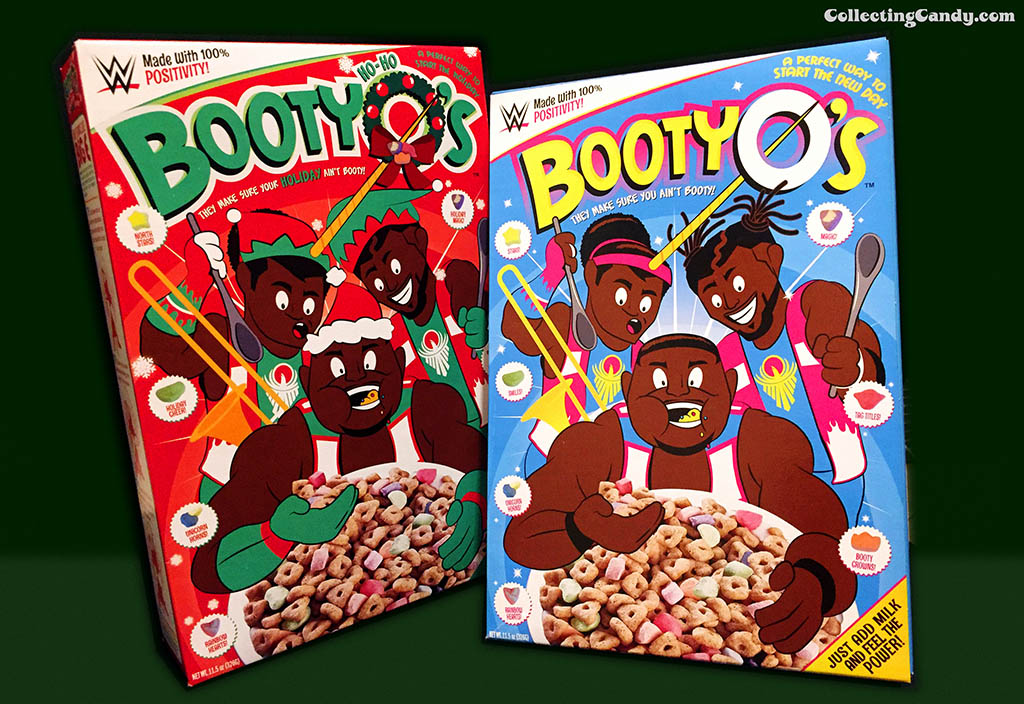 With a holiday Christmas version of the cereal to boot, it’s clear that the folks at FYE are having fun with their license.  BootyO’s are a throwback in the best of ways (certainly hearkening back to WWF Superstars cereal) and I’ve no doubt that every wrestling enthusiast out there can appreciate this one.  Even I love these, and I’m not a big wrestling fan.

So there you have it, a great set of nine store exclusive WWE-themed chocolate bar wrappers (and two cereal boxes, too).   It’s a great assortment of professional wrestling goodness and it is everything I’ve got to share on FYE’s exclusive line of WWE wrestling chocolate bars.   See you next time!

A New York City based writer, editor and sometimes actor. After spending much of the 1990′s in the comic book business helping tell the stories of Marvel Comics’ X-Men as series editor, he has since split his time between developing his own entertainment properties while still consulting and working on others. Having been described as “the Indiana Jones of lost and forgotten candy”, Jason is one of the country’s premier candy collectors and historians with his discoveries appearing in countless blogs, magazines, newspaper articles, and books. Always happy to share his knowledge and unique perspectives on this colorful part of our popular culture, Jason has consulted with New York’s Museum of Food and Drink and has also been a featured guest on Food Network’s Heavyweights, France’s M6 Capital, and New York’s TheActionRoom.com. My Google Profile+
View all posts by Jason Liebig →
This entry was posted in 1990's, Chocolate and tagged candy collecting, candy collection, candy collector, candy wrapper collection, candy wrapper collector, celebrity, collectible, collecting candy, confectionery, confections, licensed, packaging, packaging design, sweets, vintage candy wrappers, Word Wrestling Entertainment, wrapper, WWE. Bookmark the permalink.