The Fun & Sophisticated Flavors (and cool packaging) of Chuao Chocolatier!

Though the focus of CollectingCandy.com tends to be mainstream brands and candy history, I still put an effort to keep up with the new stuff from smaller manufacturers.  Every so often one of those products really catches my eye and requires deeper investigation.  Such was the case when I came across the impressive chocolate bar offerings of Chuao Chocolatier.

On their about page, Chuao Chocolatier takes credit for pioneering the category of “fusion chocolate” and it’s hard to argue with that assessment when they’re invoking and blending flavors like pop corn, breadcrumbs, bacon and chile.

Founded in 2002, Chuao has grown from their humble beginnings selling out of a single boutique in Encinitas, CA to now being distributed nationwide and with a full range of unusual and exotic chocolate offerings.

That’s all pretty neat stuff, but here at CollectingCandy.com I put a lot of focus on packaging and packaging design, and that’s certainly what first drew me to Chuao (pronounced Chew-Wow).  Chuao Chocolatier gave their packaging a significant makeover in late 2012 and that striking new packaging is what got my attention.   As I recall, it was their Pop Corn Pop bar package that grabbed me: 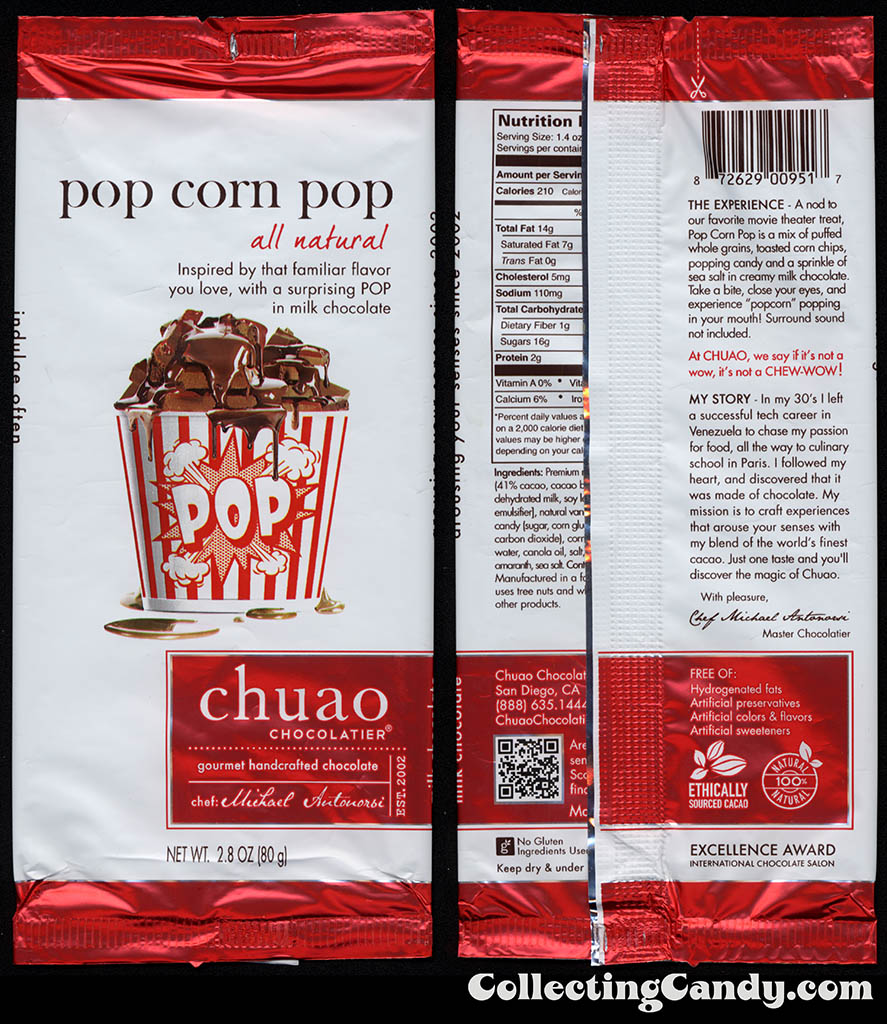 I love the pop art style of the popcorn box on that wrapper, paired with the deliciously photographed chocolate.  It just sets the mood for a fun confectionery experience.  And since one is never enough, I had to get the rest of the line.  That led to me getting Chuao’s Ultimate Chocolate Bar Set, or what I’ve been calling their ten-bar gift box.  Check it out: 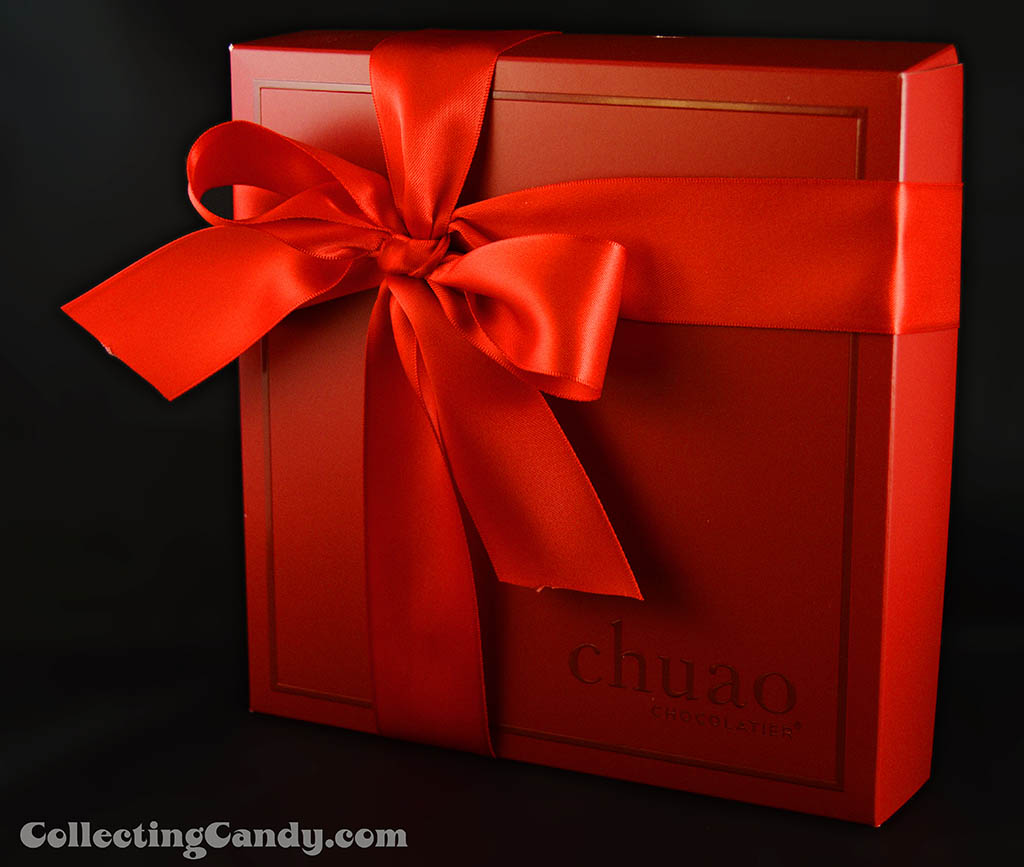 The gift box is classy and beautiful and I think it really sets the stage for the presentation of this colorful set of unusual chocolate bars. 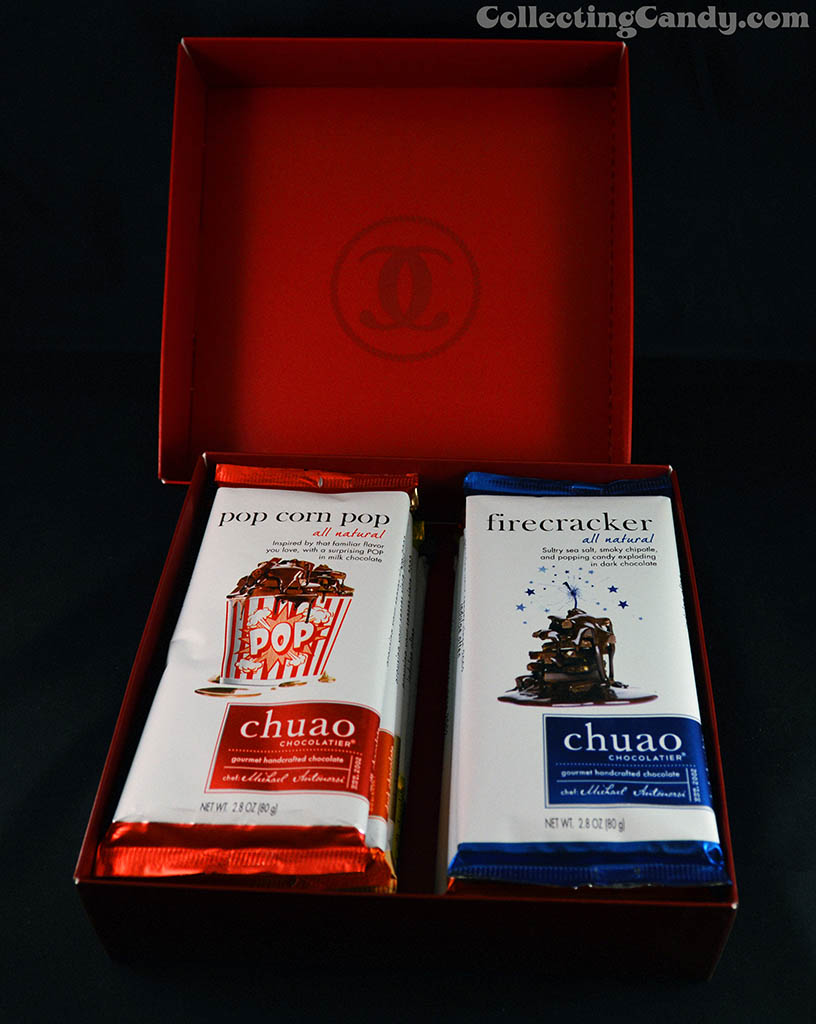 Each package features its own color scheme and is anchored with a good deal of negative space, allowing the central images to stand out.  These were so beautiful that I had to arrange a few different photos of them: 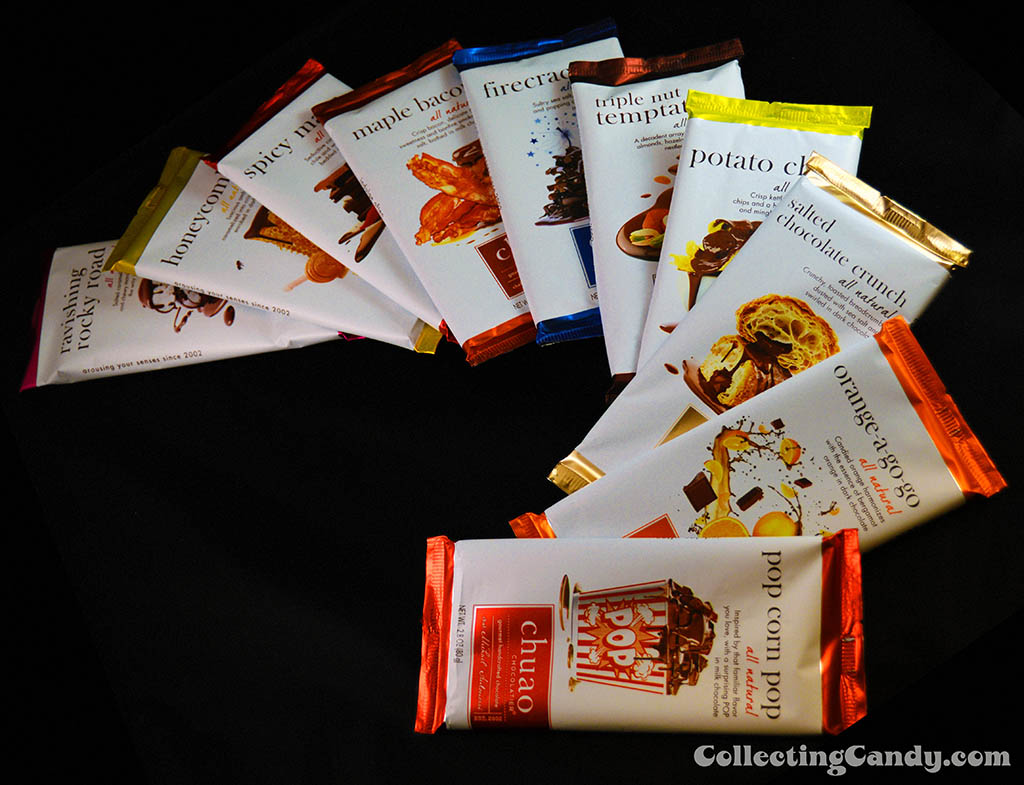 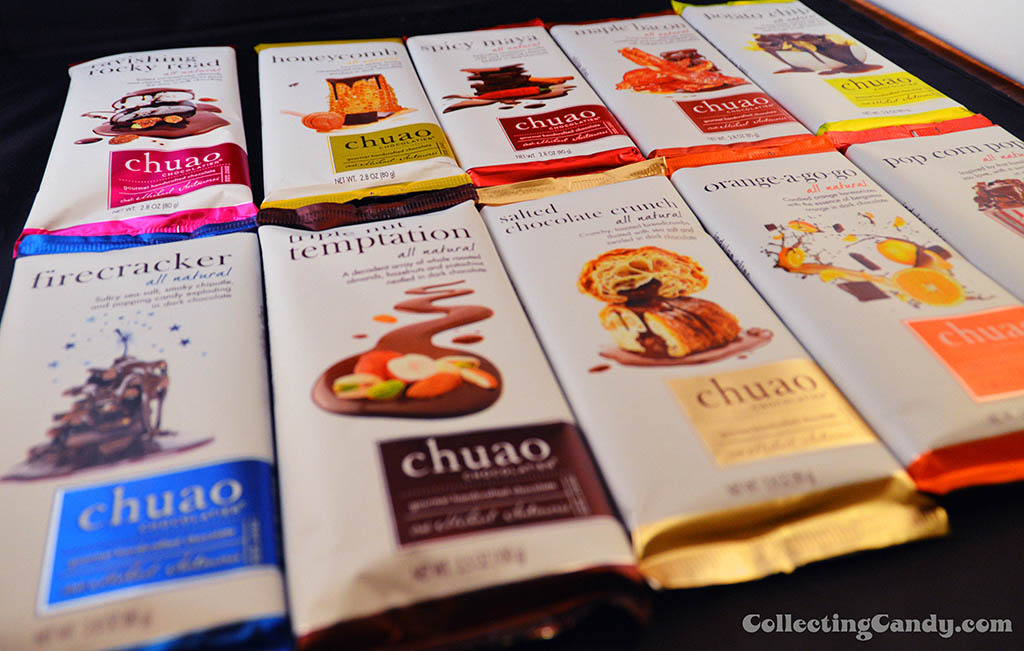 I think there’s something truly appealing about those bars and seeing them all together.  I’ve already shown you my close-up scans of the Pop Corn Pop package, and now I’d like to share similar scans of the other nine.  Here they are: 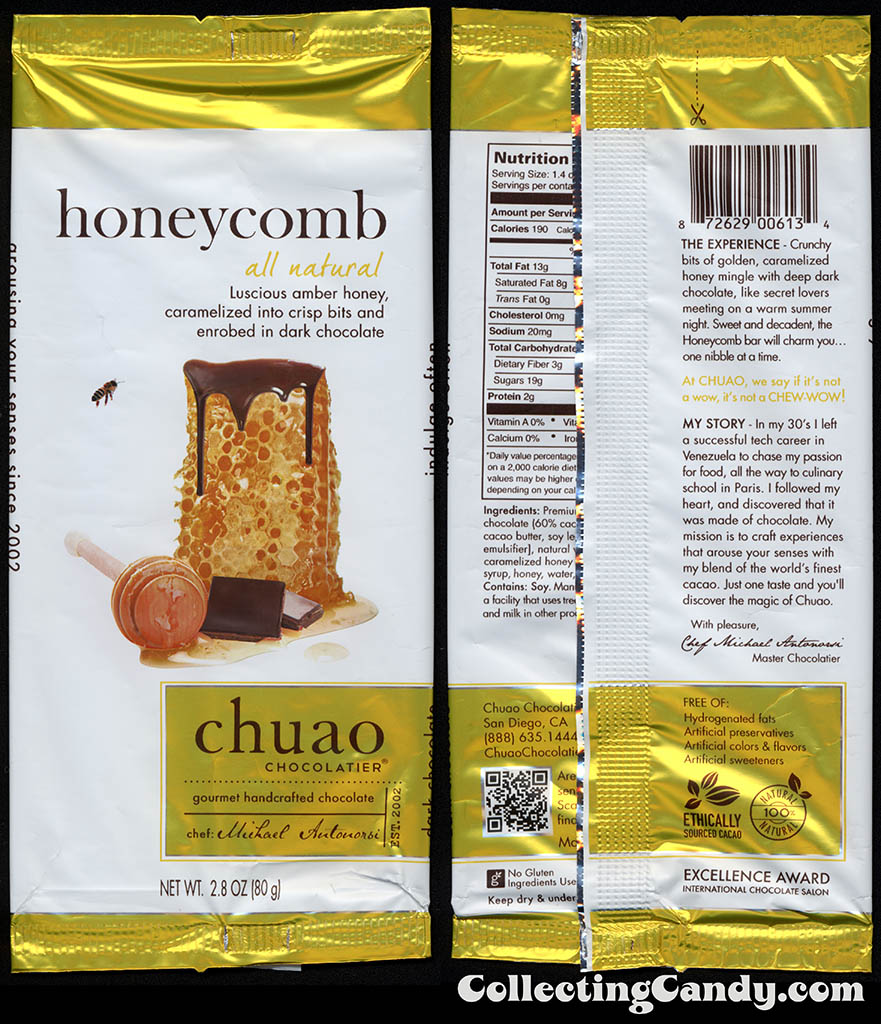 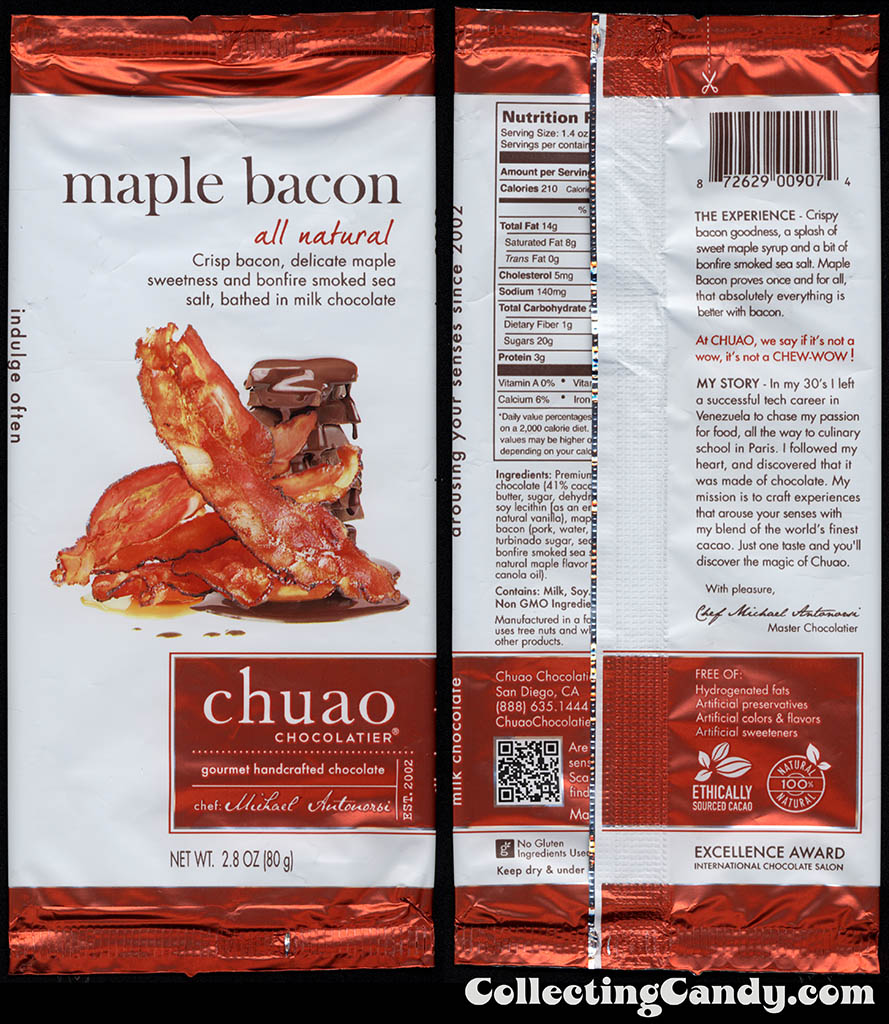 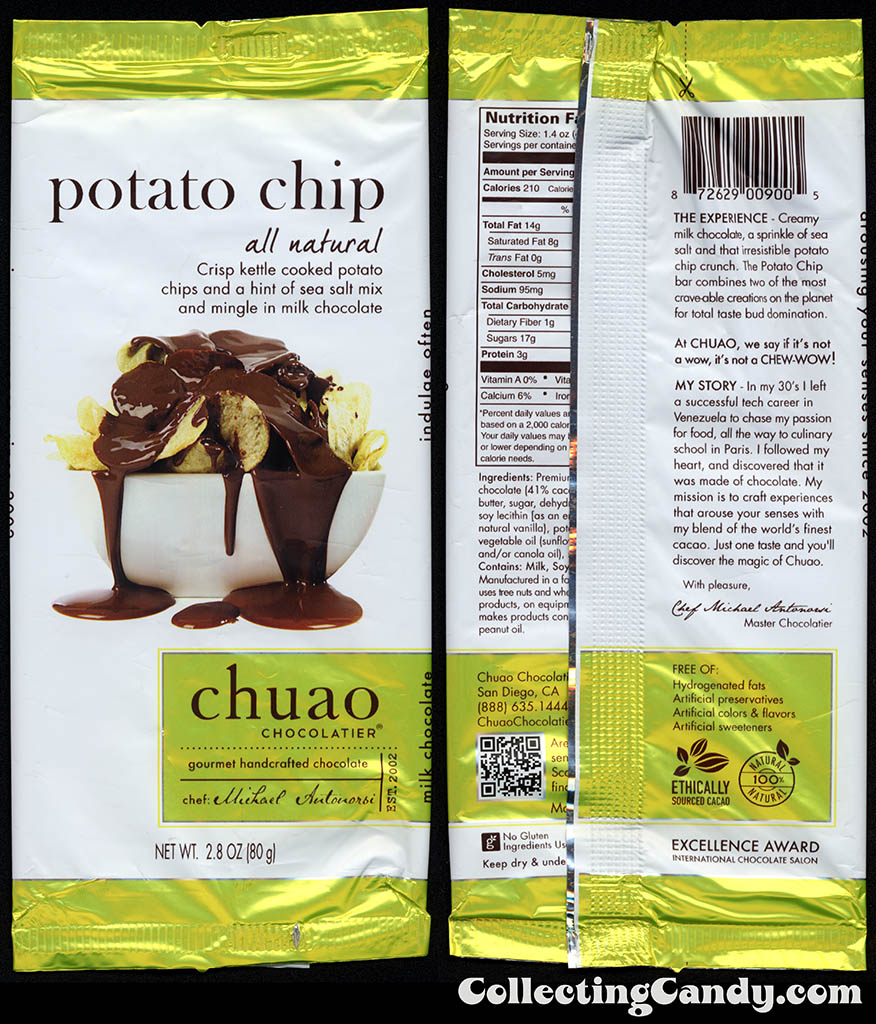 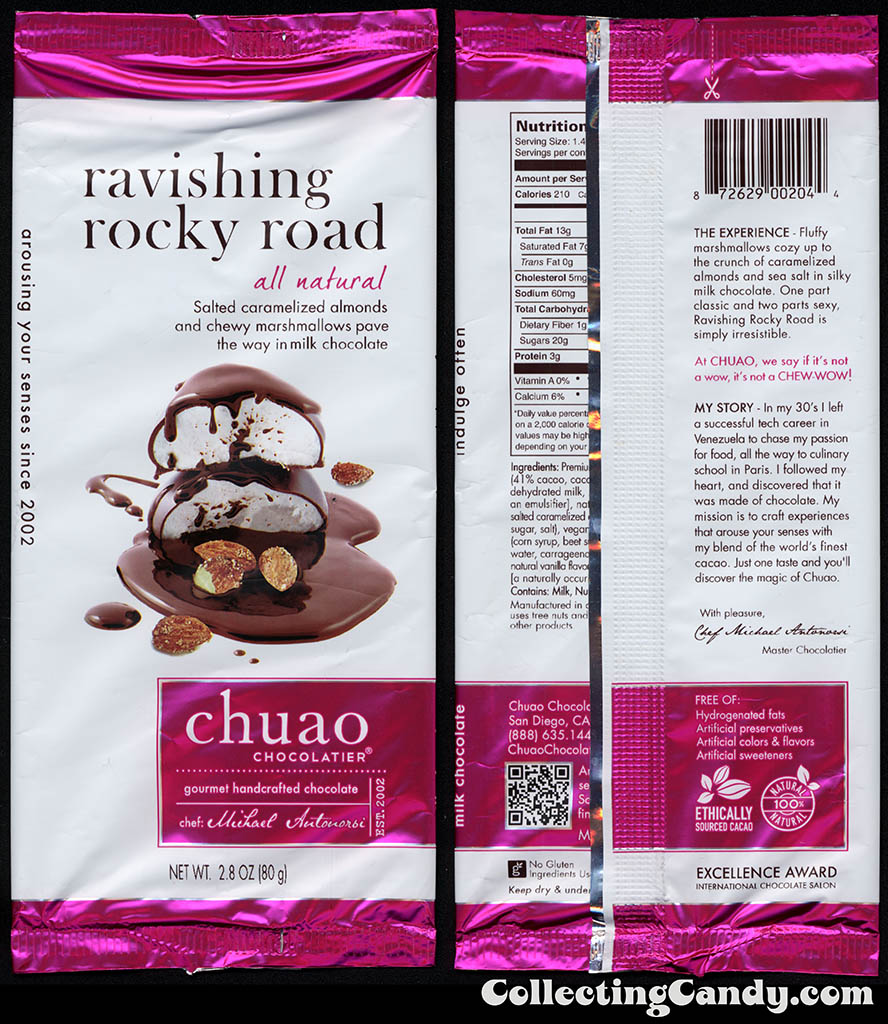 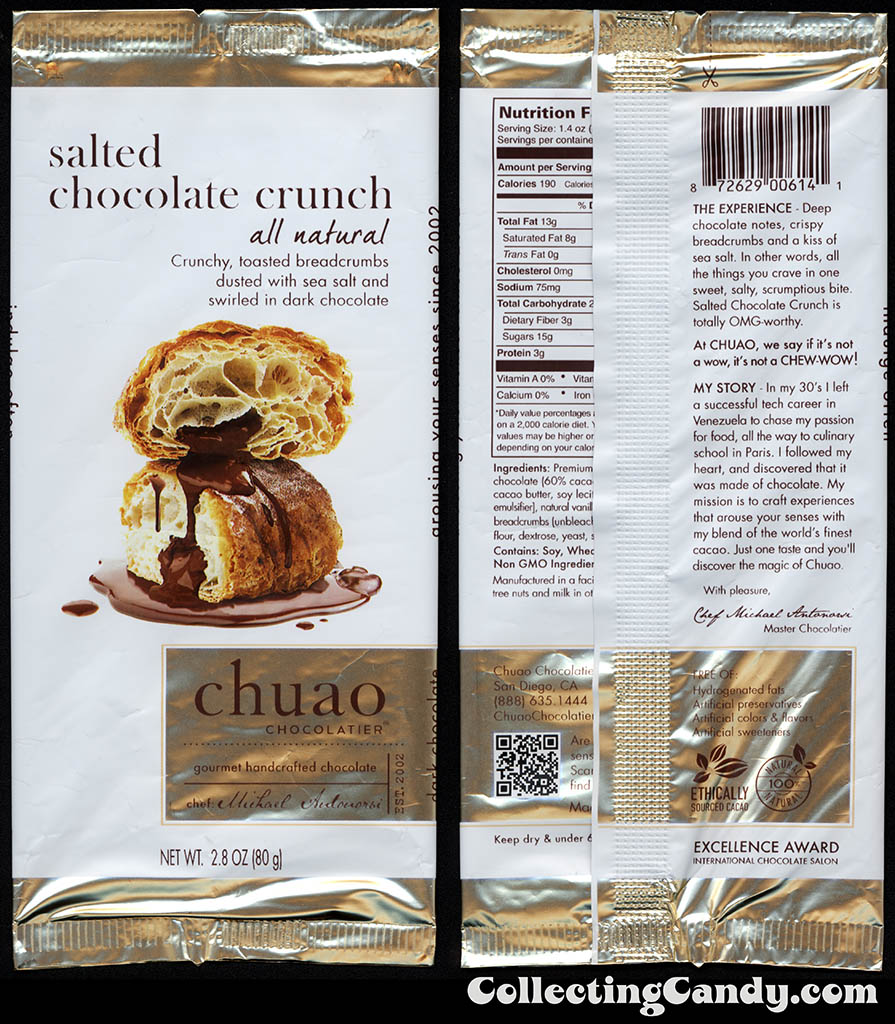 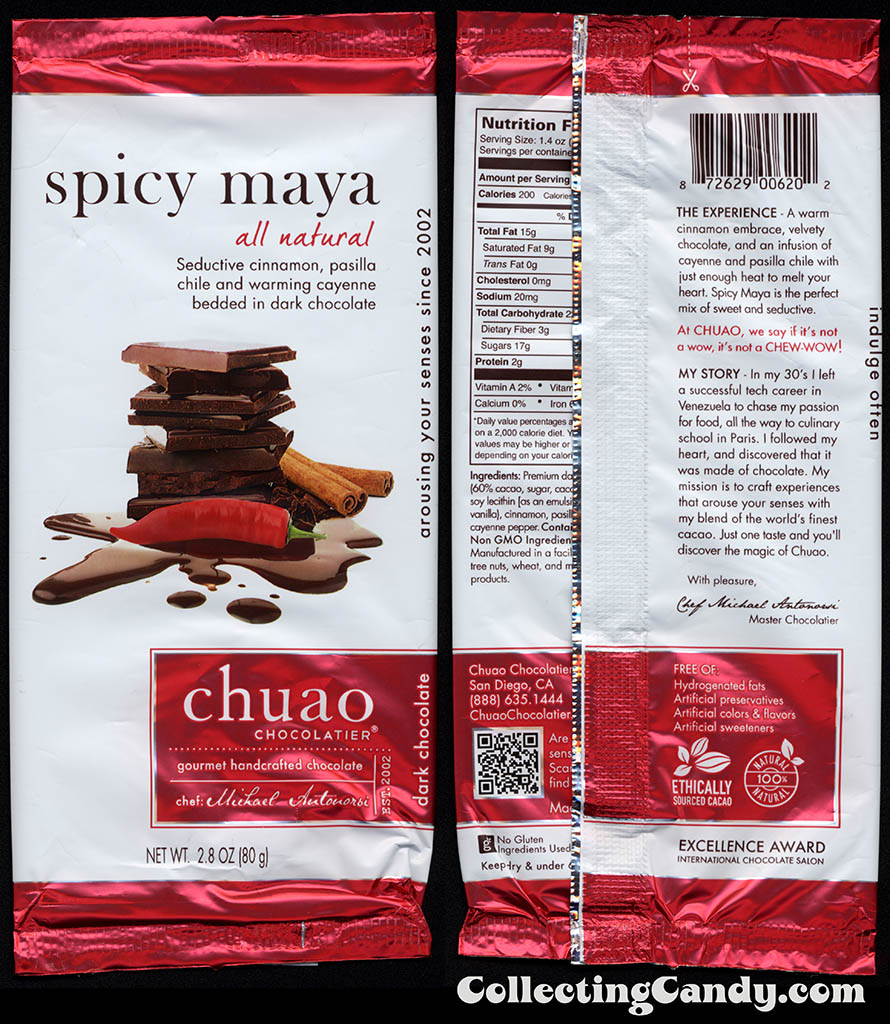 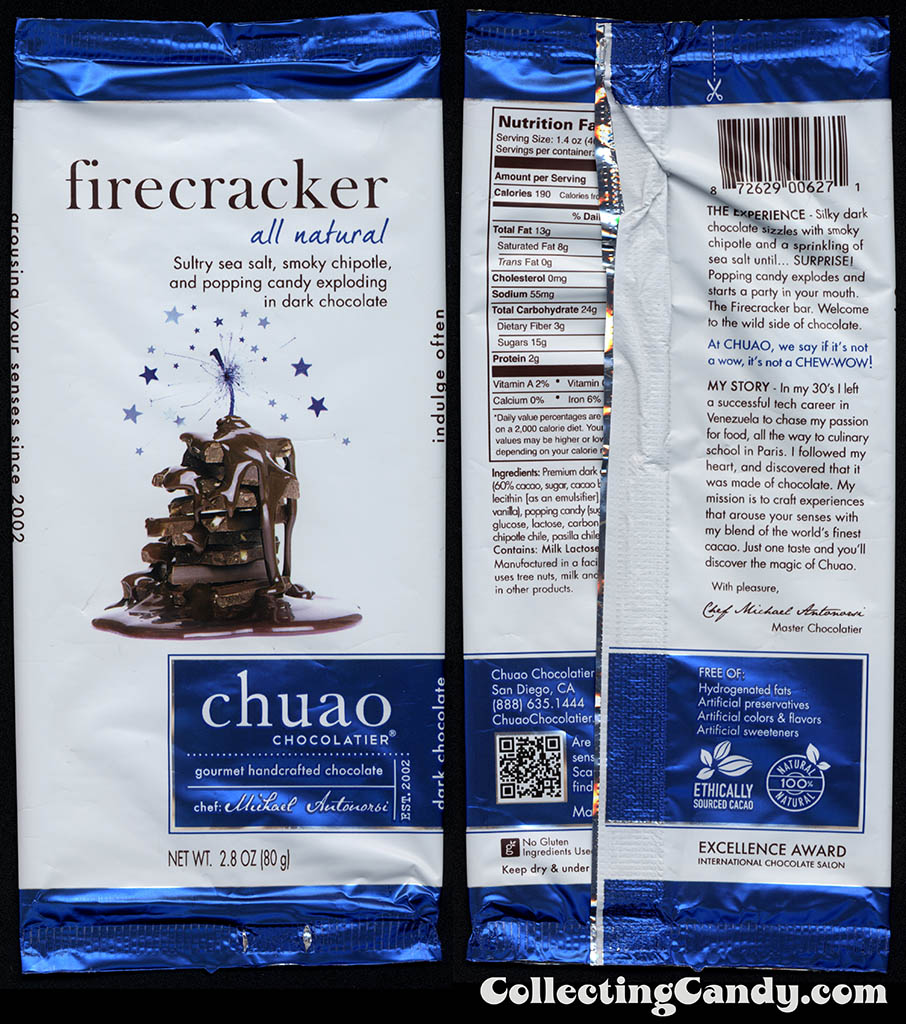 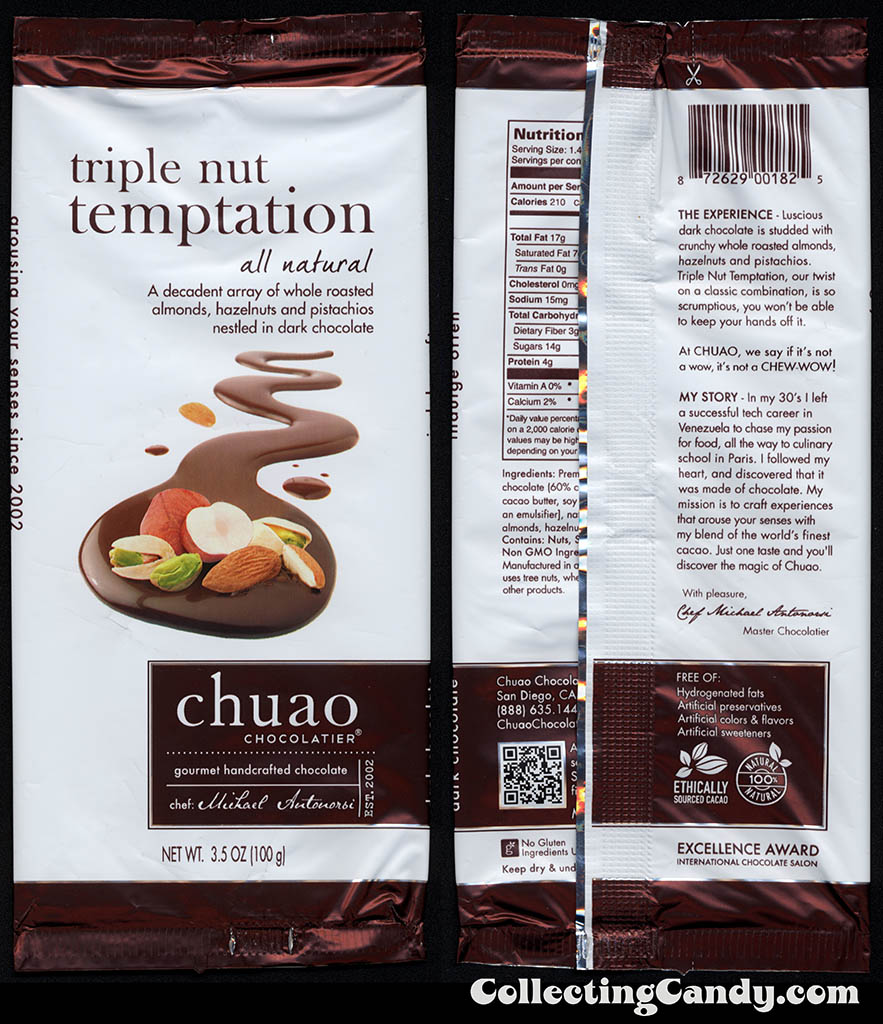 Aren’t those beautiful?  The packaging is awesome and having sampled each of the ten bars, the contents match up well.  My favorites of the bunch were Ravishing Rocky Road, Salted Chocolate Crunch and Triple Nut Temptation.  Delicious!

Unfortunately, I don’t have any of Chuao’s pre-makeover wrappers to share and contrast but if I ever come up with any, I’ll revisit the topic to show the designs these replaced.

One last bit to share – Chuao has gotten quite a nice amount of media attention – here’s their appearance on Good Morning America (where you can catch a glimpse of their pre-makeover packaging designs):

For now, that’s everything I’ve got to share on the fun and sophisticated flavors (and cool packaging) of Chuao Chocolatier.  See you next time!

A New York City based writer, editor and sometimes actor. After spending much of the 1990′s in the comic book business helping tell the stories of Marvel Comics’ X-Men as series editor, he has since split his time between developing his own entertainment properties while still consulting and working on others. Having been described as “the Indiana Jones of lost and forgotten candy”, Jason is one of the country’s premier candy collectors and historians with his discoveries appearing in countless blogs, magazines, newspaper articles, and books. Always happy to share his knowledge and unique perspectives on this colorful part of our popular culture, Jason has consulted with New York’s Museum of Food and Drink and has also been a featured guest on Food Network’s Heavyweights, France’s M6 Capital, and New York’s TheActionRoom.com. My Google Profile+
View all posts by Jason Liebig →
This entry was posted in Chocolate and tagged artisan, artisinal, California, candy collecting, candy collection, candy collector, candy wrapper collection, candy wrapper collector, collectible, collecting candy, confectionery, confections, gourmet, packaging, sweets, vintage candy wrapper, wrapper. Bookmark the permalink.

1 Response to The Fun & Sophisticated Flavors (and cool packaging) of Chuao Chocolatier!