Hershey bars are probably the most consistent confectionery offering to come out of the United States, especially with regard to their wrapper design.  For nearly a century, a Hershey bar meant a brown paper wrapper with a silver block letter logo.  And that’s still how a Hershey bar appears today.  Because of that, it’s not easy to get too excited about Hershey bar wrappers from years’ past – as much as we might love them, they all kind of look the same.  In spite of that, today I’m looking back at some unusually festive wrappers that Hershey paired with their classic milk chocolate and milk chocolate with almonds bars back in the early 1990’s.  Make the jump to check them out.

Before I get to the featured wrappers for today, I would like to point out that Hershey has begun to do something similar over the last year or so.  That is, they’ve taken their classic Hershey bar design and paired it with something a bit more colorful and in the recent cases, exotic.  It started last year with their Hershey’s Candy Cane bars, and was followed-up during this most recent Halloween with their Hershey’s Candy Corn bars.  I think those contemporary releases go to show that when you take something iconic and beloved like the classic Hershey bar design and give it a colorful twist, it immediately becomes eye-catching.

Now let’s get to the holiday Hershey bars of the 1990’s.  Since these were seasonal packaging variations, there isn’t too much to say about them, as the wrappers largely speak for themselves.  I will say that when I recently came across these, I immediately recalled seeing them when they were originally on store shelves, some twenty years ago.  The holiday wrapper design was distinctive and made an impression on me those many years ago.  Looking at them now brings a Christmas smile to my face. 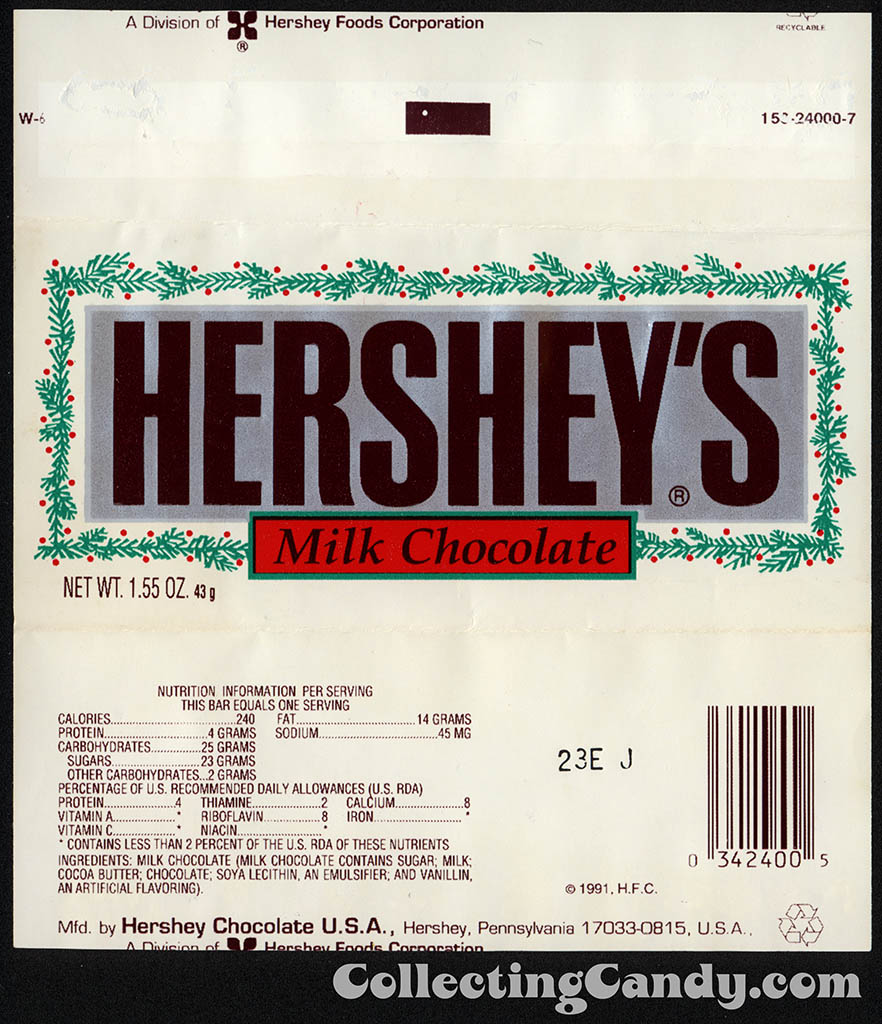 I really dig those two wrappers and as I was bringing today’s post together, I thought that was all I had on them.   But then I realized I had another example with a subtle wrapper design variation.  Instead of a red box describing the bar under the main logo, this one had a green box. This “green box” example also retains the original green foil inner wrapper.  That colorful foil inner wrapper must have made these wonderfully-festive on shelves!

[Note:  I’m assuming that these were not available concurrently and rather one variation predated the other.  Just not sure which came first as they both have 1991 copyrights.] 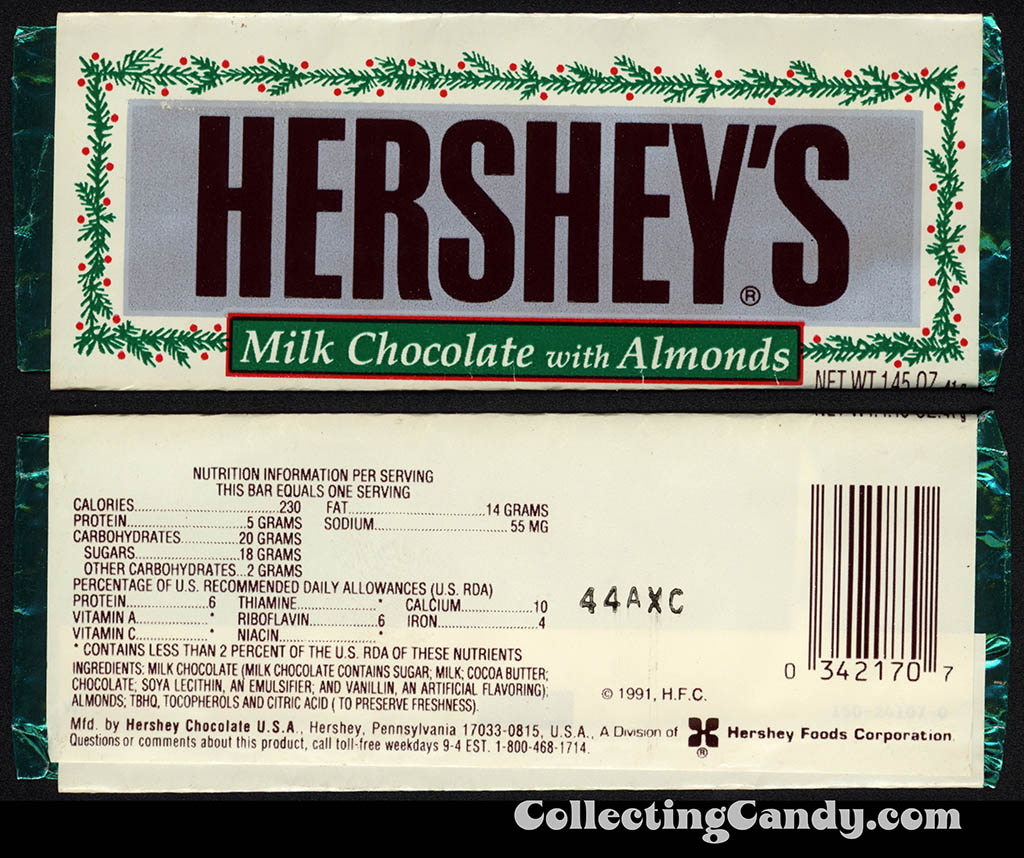 And that’s what I’ve got on Hershey’s early 90’s holiday-themed bar wrappers.  I hope you’ve enjoyed checking them out.

A New York City based writer, editor and sometimes actor. After spending much of the 1990′s in the comic book business helping tell the stories of Marvel Comics’ X-Men as series editor, he has since split his time between developing his own entertainment properties while still consulting and working on others. Having been described as “the Indiana Jones of lost and forgotten candy”, Jason is one of the country’s premier candy collectors and historians with his discoveries appearing in countless blogs, magazines, newspaper articles, and books. Always happy to share his knowledge and unique perspectives on this colorful part of our popular culture, Jason has consulted with New York’s Museum of Food and Drink and has also been a featured guest on Food Network’s Heavyweights, France’s M6 Capital, and New York’s TheActionRoom.com. My Google Profile+
View all posts by Jason Liebig →
This entry was posted in 1990's, Chocolate, Christmas, Halloween, Hershey, Holiday, Uncategorized and tagged 1990's, 90's, candy collecting, candy collection, candy collector, candy wrapper collection, candy wrapper collector, chocolate, Christmas, collectible, collecting candy, confectionery, confections, Hershey, Hershey bar wrappers, Hershey's, holiday, packaging, packaging design, sweets, vintage candy wrappers, wrapper. Bookmark the permalink.