Back in December I covered Hershey’s fun new holiday seasonal offering; the candy cane-flavored Hershey bar.  I thought that bar featured an elegant and appealing wrapper design as well as being a pretty tasty offering to boot.  For Halloween this year, they’re offering another bar with another unusual holiday-themed flavor featuring the same packaging style.  This time it’s Hershey’s Candy Corn!

While the candy cane Hershey’s offerings from last Christmas came in full-size bars, thus far I’ve only encountered the candy corn variety as part of a snack-size multi-pack.  Here’s what the package looks like:

As I mentioned back in December with the candy cane release, for me what makes these so appealing is how they take the tried-and-true Hershey bar look but give it a bit of color and fun.  Here’s one of the individual snack size bar wrappers: 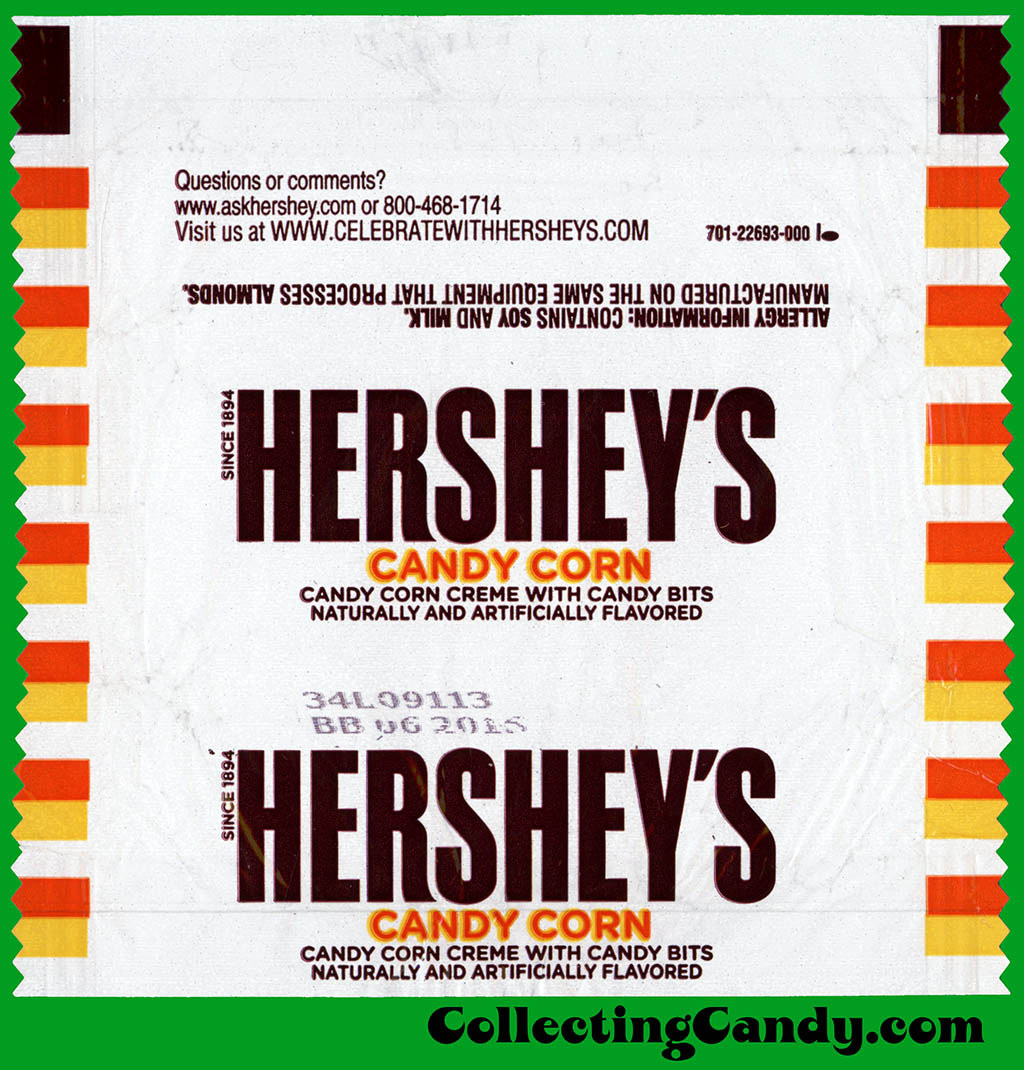 For those that don’t recall exactly what the Hershey’s Candy Cane bars look like, I put together this side-by-side comparison shot: 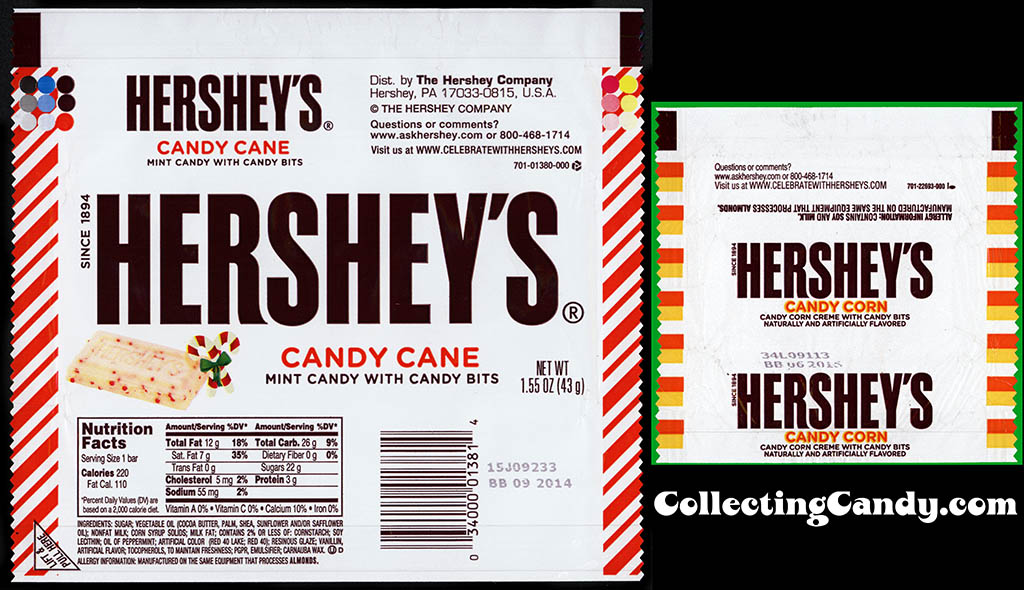 Unfortunately, the actual candy corn graphic is found only on the large multi-bag and not on the individual snack size wrappers.   That makes me hope we’ll eventually get a full-size bar release for Hershey’s Candy Corn – if not this year, perhaps in 2015.   Heck, I’d love to see them use this format for a continuing series of unusually-flavored Hershey bar releases.  It’d be great to be able to have a whole assortment of oddball-flavor Hershey seasonal wrappers to collect (and fun flavors to try).  Just imagine what else they could do?

And that’s everything I’ve got to share on Hershey’s new candy corn-flavored bar for Halloween. 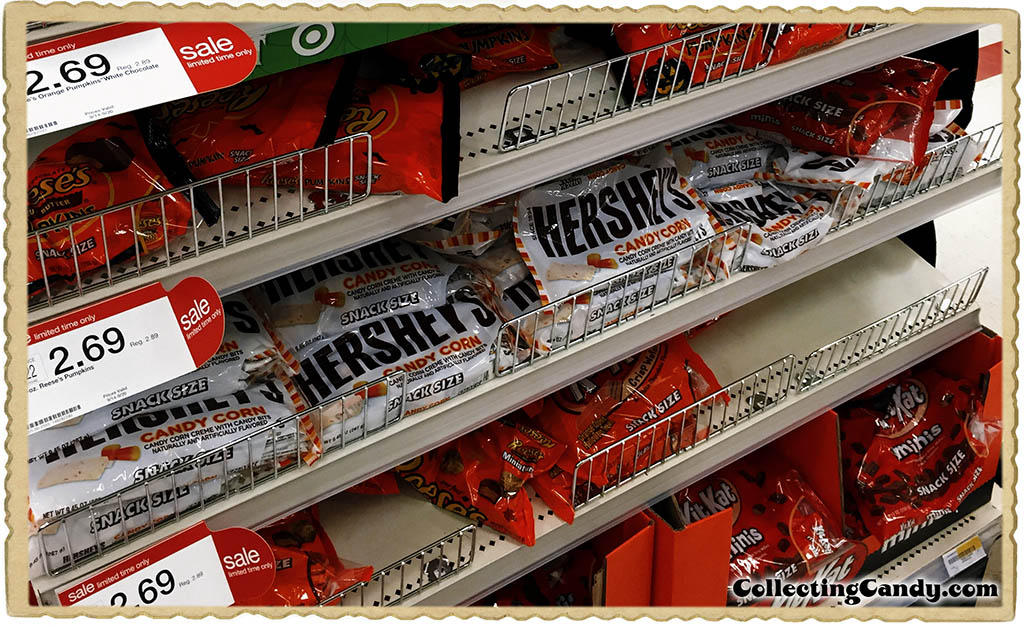 A New York City based writer, editor and sometimes actor. After spending much of the 1990′s in the comic book business helping tell the stories of Marvel Comics’ X-Men as series editor, he has since split his time between developing his own entertainment properties while still consulting and working on others. Having been described as “the Indiana Jones of lost and forgotten candy”, Jason is one of the country’s premier candy collectors and historians with his discoveries appearing in countless blogs, magazines, newspaper articles, and books. Always happy to share his knowledge and unique perspectives on this colorful part of our popular culture, Jason has consulted with New York’s Museum of Food and Drink and has also been a featured guest on Food Network’s Heavyweights, France’s M6 Capital, and New York’s TheActionRoom.com. My Google Profile+
View all posts by Jason Liebig →
This entry was posted in Chocolate, CountdownToHalloween, Halloween, Hershey, Holiday, Uncategorized and tagged candy collecting, candy collection, candy collector, candy corn, candy wrapper collection, candy wrapper collector, collectible, collecting candy, confectionery, confections, Halloween, Hershey, Hershey's, packaging, seasonal, sweets, vintage candy wrapper, wrapper. Bookmark the permalink.