I grew up with Brach’s candy and as long as I can remember, it’s always been around.  The brand and its products have found ways to thrive through countless changes in the confectionery world, which is a testament to how timeless their candy is.

While Brach’s Pick-A-Mix offerings have always been a part of my candy enjoyment year-round, I also remember them for their great holiday offerings and seasonal store displays.   Today I’m excited to share a wonderful piece of historical candy ephemera – the contents of a 1972 Easter promotional sales kit, sent out to Brach’s salesmen.  Featuring a full-color catalog as well as black-and-white supplements, it’s a fabulous window into Easter candy’s past and one I’m excited to share today!

The pages and images from the catalog speak volumes themselves, so I don’t have much additional to say about them.   I will note that the cover features a photo of a beautifully-decorated and well-stocked Brach’s candy display.  Historically, Brach’s put a lot of effort into creating these types of point-of-purchase display areas, even going so far as to sponsor contests for the best displays in stores.  Some of these store displays were impressively large and with all manner of signage.  As such, if you were around in the 1960’s or 1970’s, the catalog’s cover image may be a bit of a flashback. 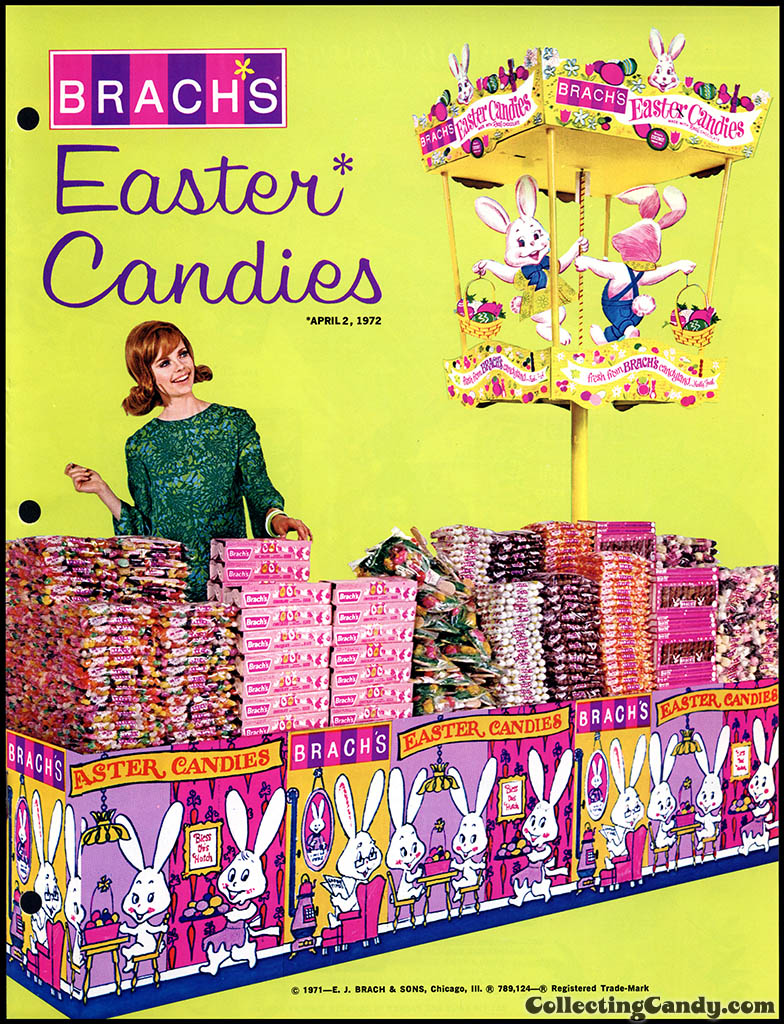 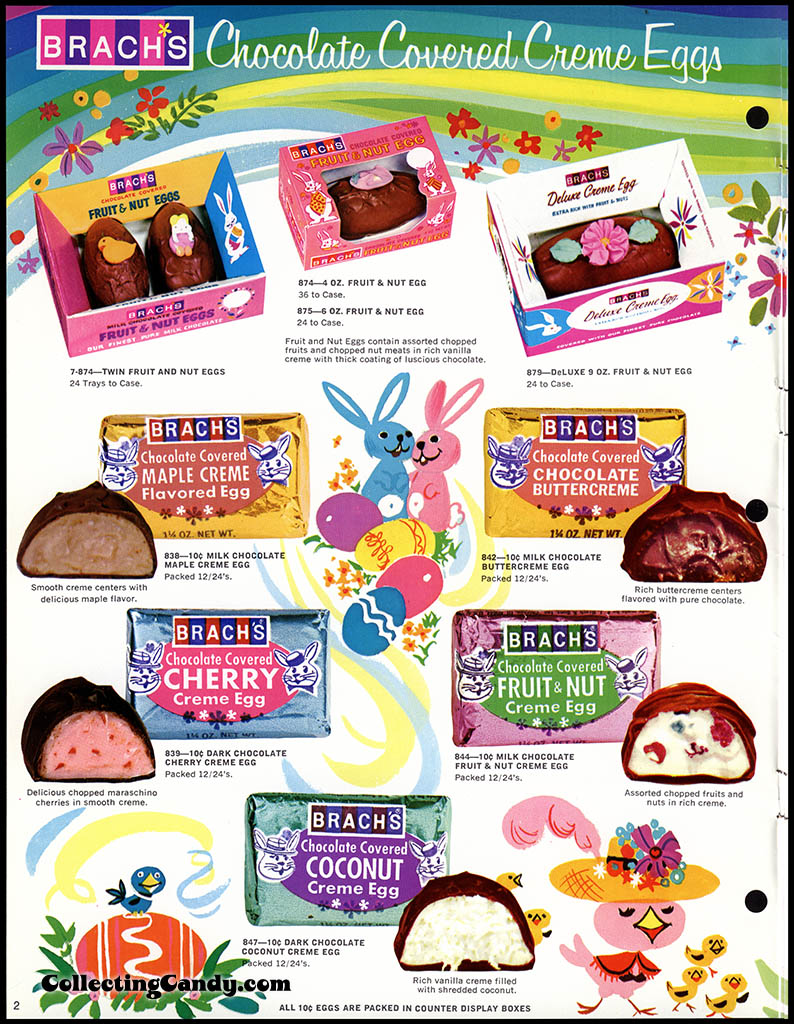 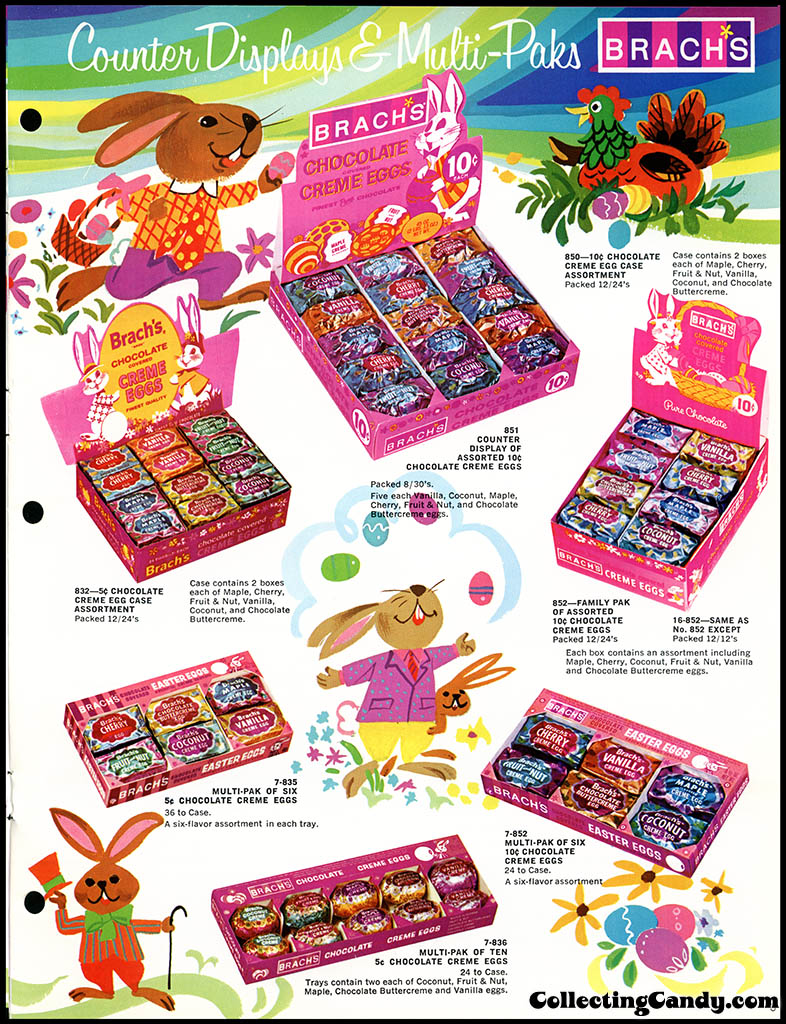 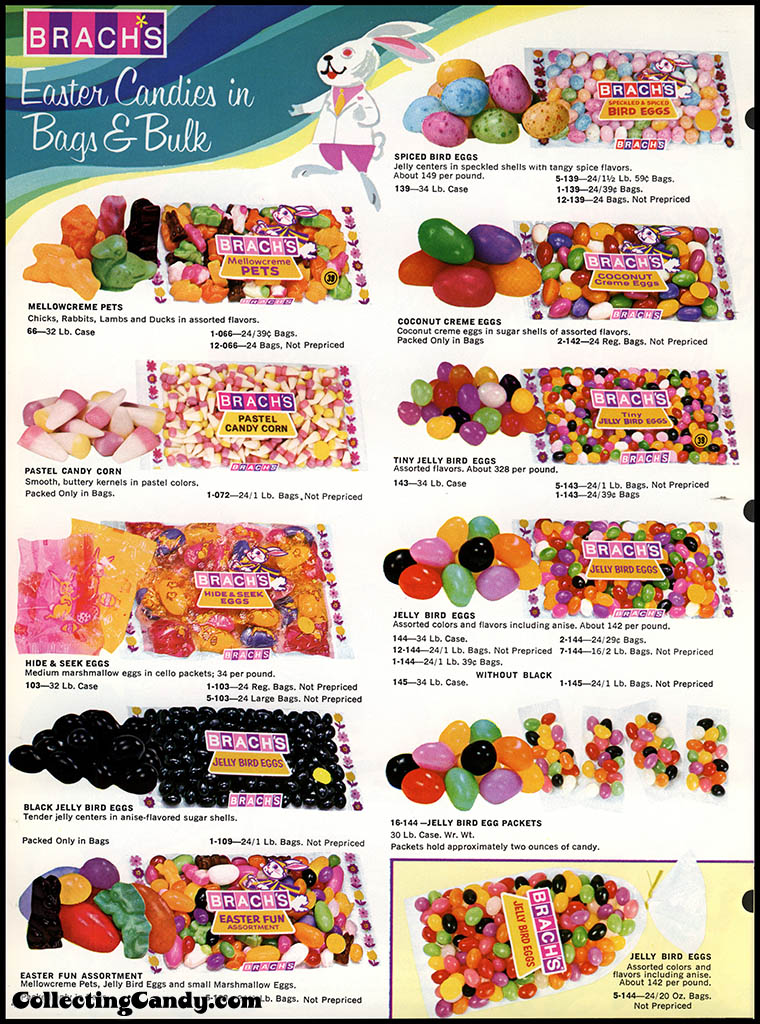 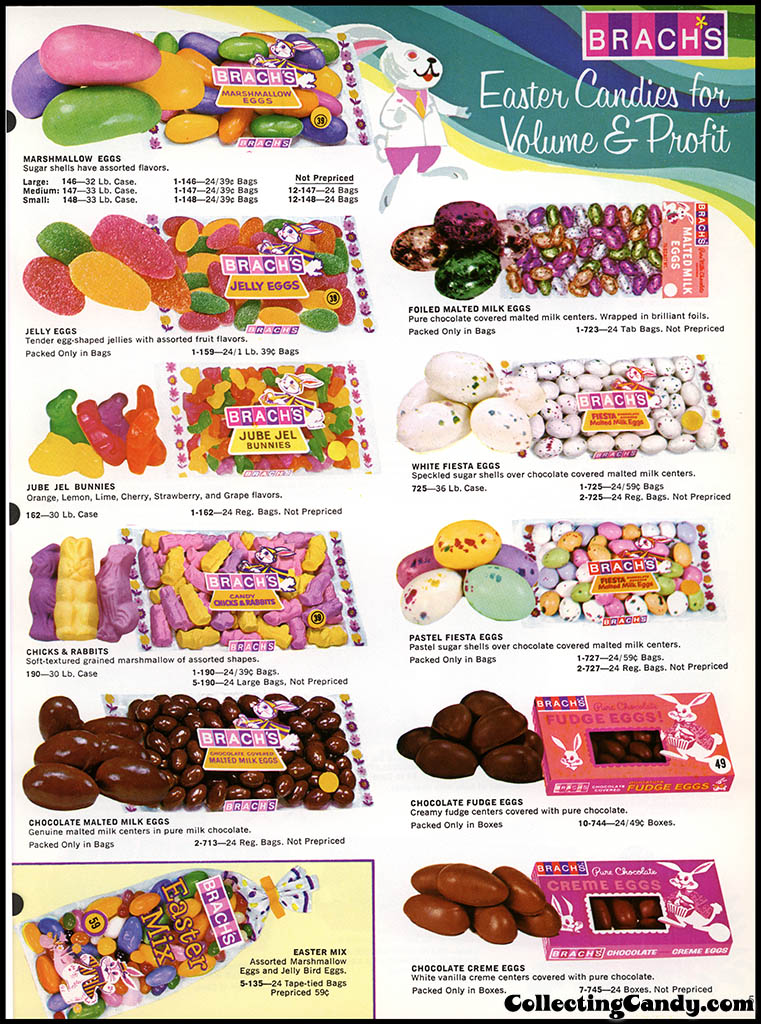 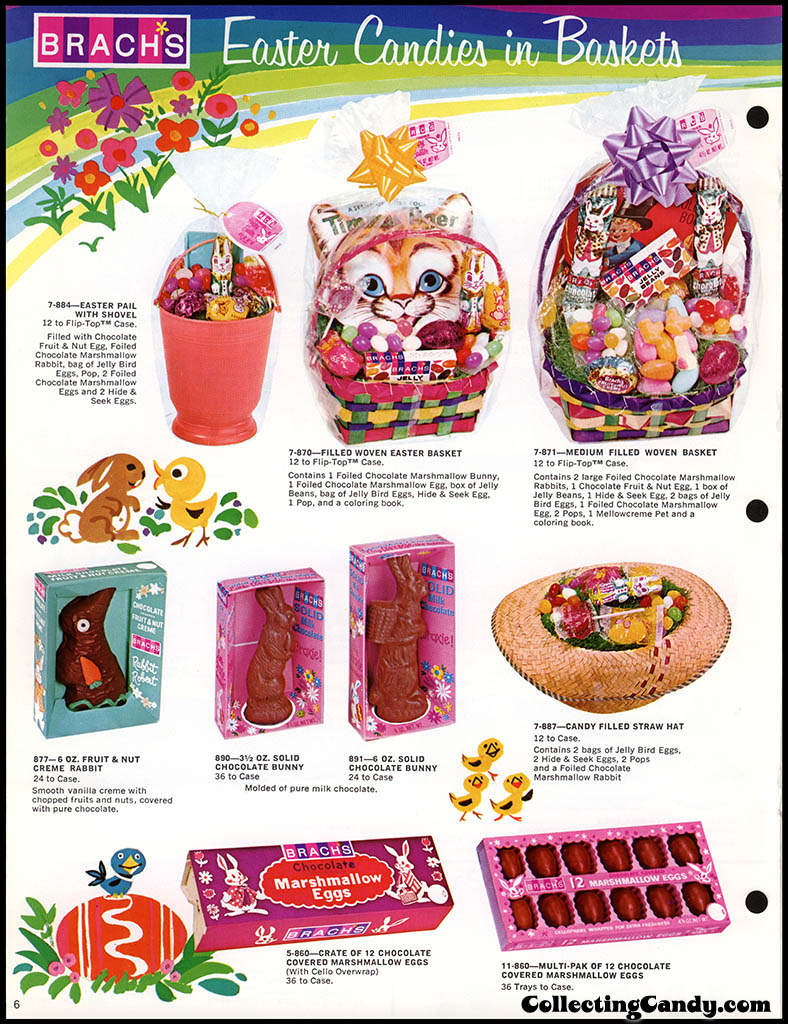 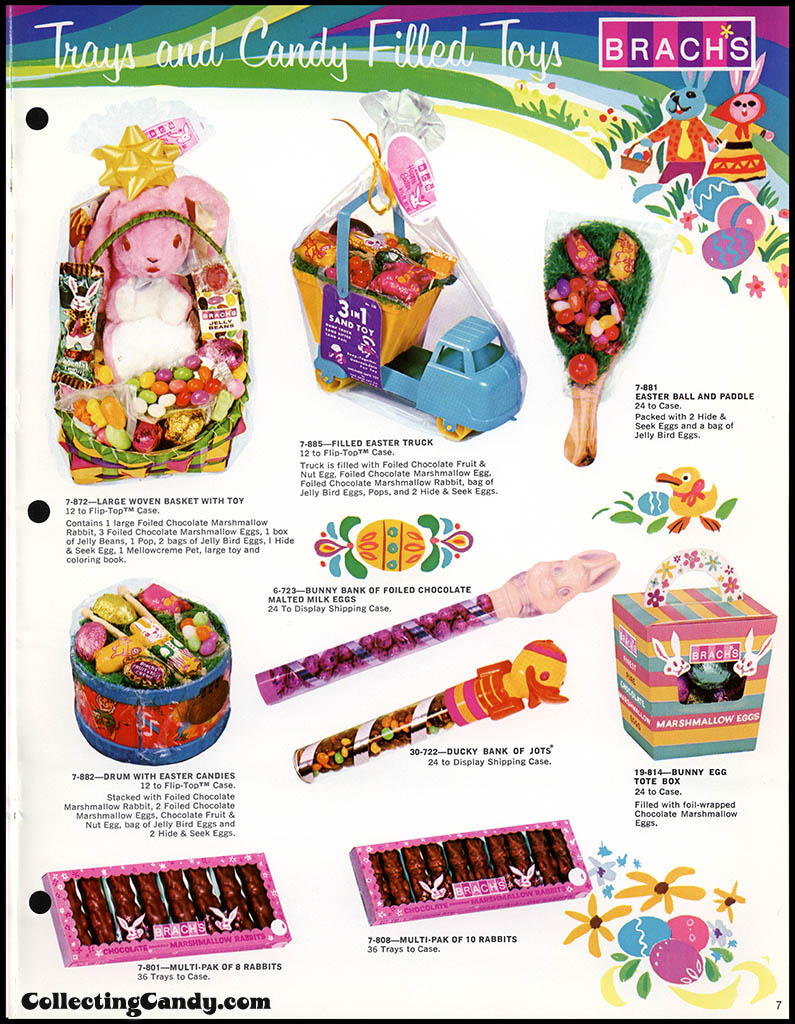 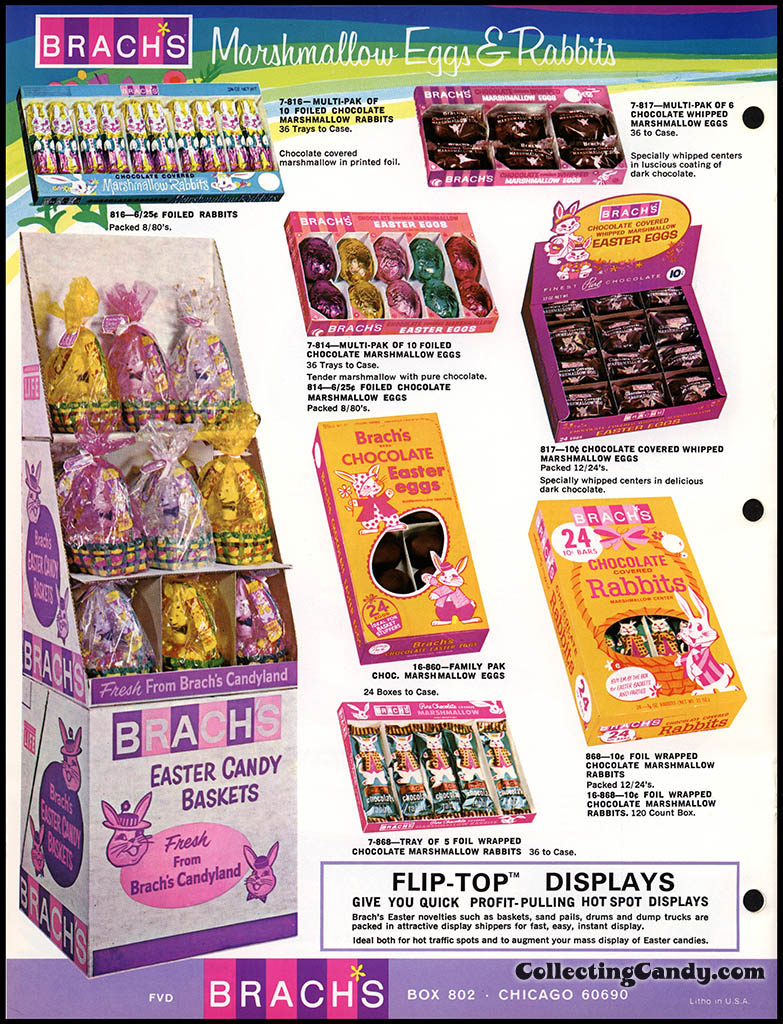 Isn’t that catalog a thing of confectionery beauty?

Beyond the catalog, the salesman promotion kit had three supplemental pieces.  The first must have been a late addition to the Easter promotion for the year as it is printed in only two colors: 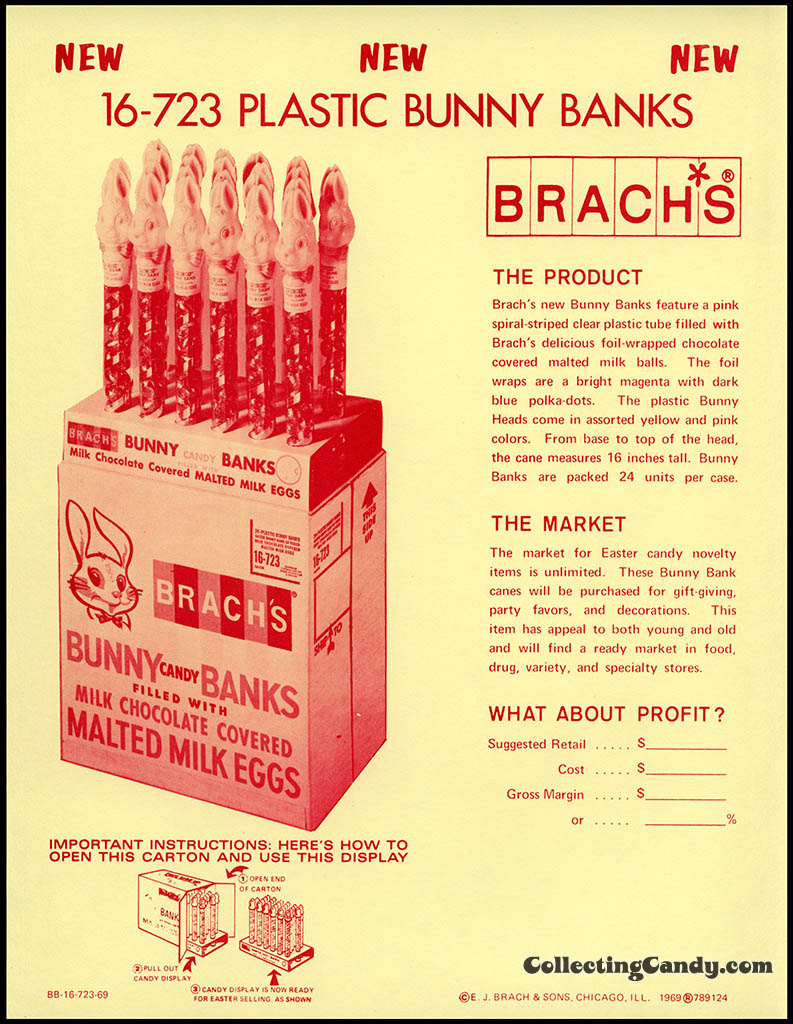 The next piece is a schedule and list of markets where Brach’s would be running Easter TV commercial spots.  Back in the 1972, this would have been key information for a salesman to have when dealing with his store accounts: 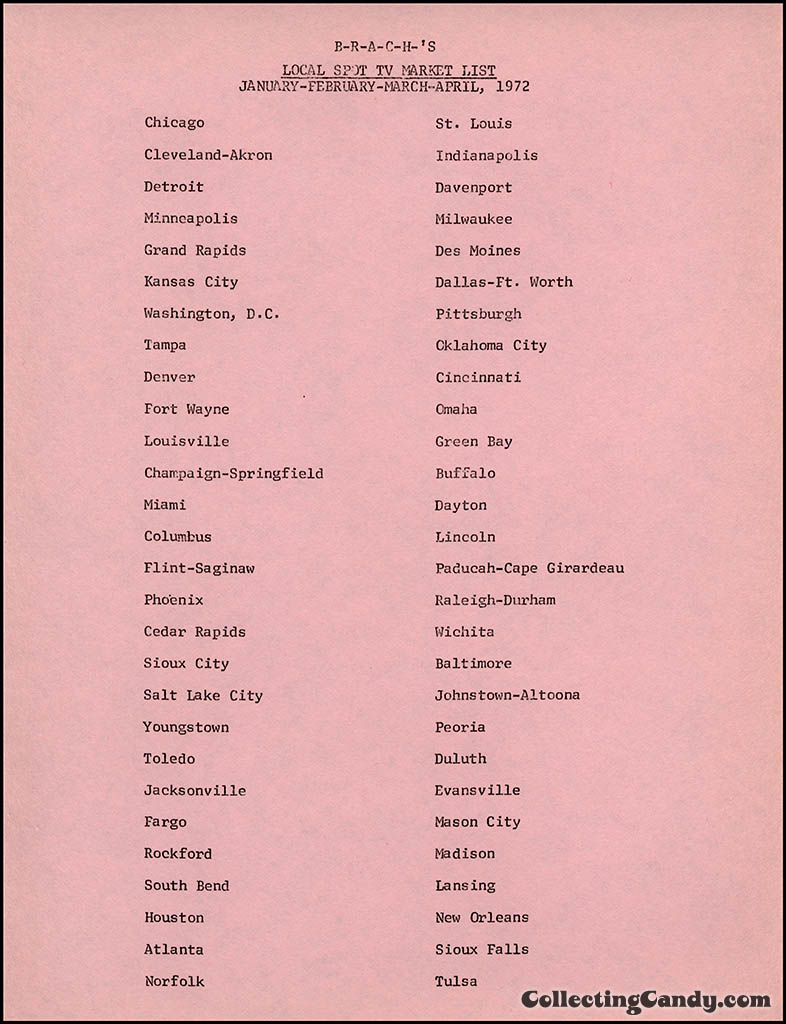 Finally, the last element of this kit I have to share is definitely a relic of the past – it’s a profit calculation wheel.  This would have allowed a salesman to quickly calculate profits on volume sold: 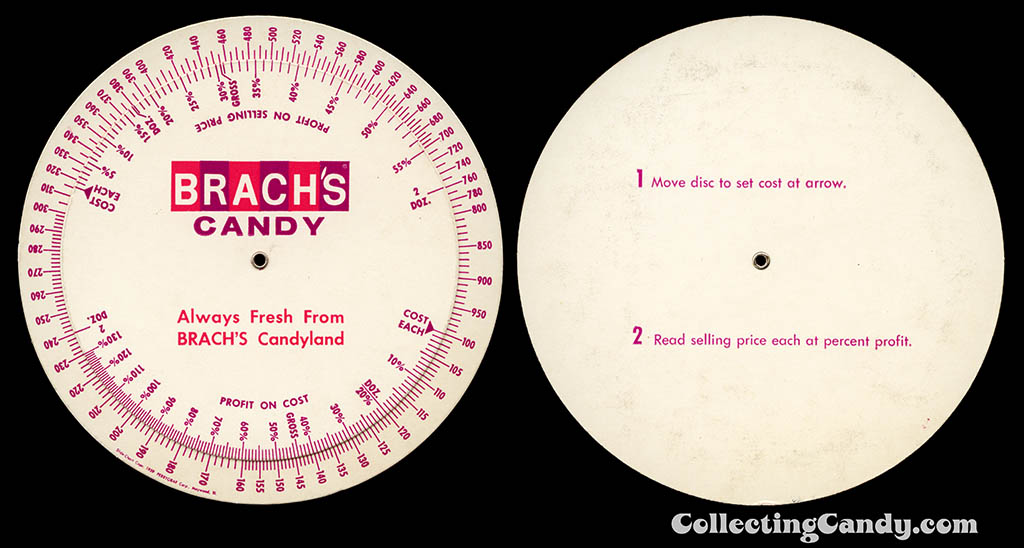 And that’s everything that came with the Brach’s 1972 Easter Promotion Kit – I hope you enjoyed this glimpse into candy sales and marketing history.  Tomorrow is Easter and we will be back with one last look at fun Easter goodies both past and present. 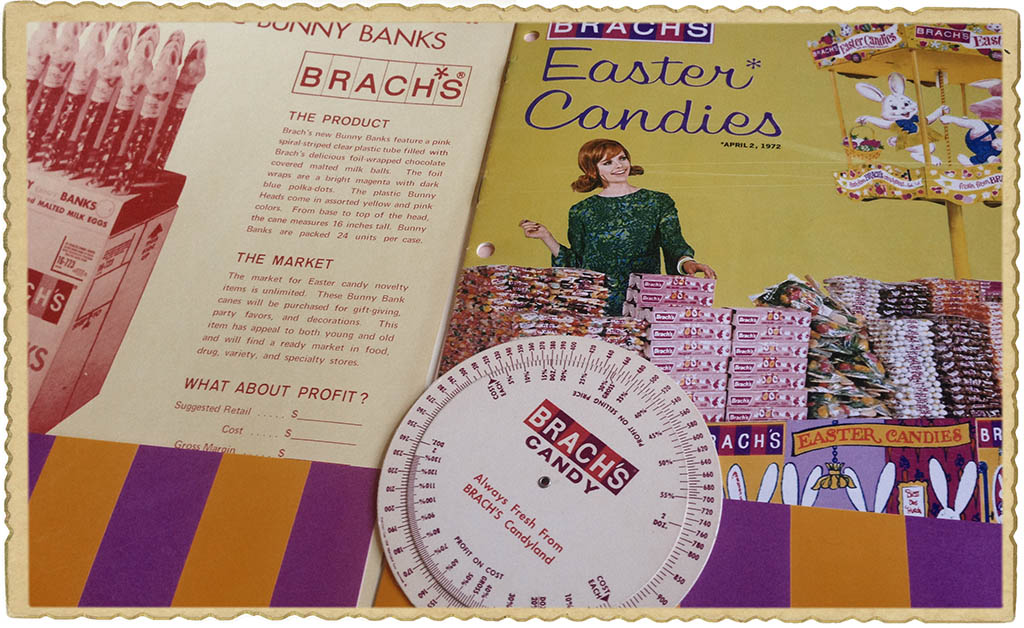 A New York City based writer, editor and sometimes actor. After spending much of the 1990′s in the comic book business helping tell the stories of Marvel Comics’ X-Men as series editor, he has since split his time between developing his own entertainment properties while still consulting and working on others. Having been described as “the Indiana Jones of lost and forgotten candy”, Jason is one of the country’s premier candy collectors and historians with his discoveries appearing in countless blogs, magazines, newspaper articles, and books. Always happy to share his knowledge and unique perspectives on this colorful part of our popular culture, Jason has consulted with New York’s Museum of Food and Drink and has also been a featured guest on Food Network’s Heavyweights, France’s M6 Capital, and New York’s TheActionRoom.com. My Google Profile+
View all posts by Jason Liebig →
This entry was posted in 1970's, Chocolate, Easter, Holiday and tagged 1970's, 1970's candy, 70's, 70's candy, Brach's, candy collecting, candy collection, candy collector, candy wrapper collection, candy wrapper collector, collectible, collecting candy, confectionery, confections, Easter, Easter candy, marketing, packaging, salesman, sweets, vintage candy wrapper, wrapper. Bookmark the permalink.