Growing up, one of my favorite spots at the grocery store was the Brach’s bulk candy or Pick-A-Mix area.  Decades before the modern bulk candy sections of super-stores, Brach’s kept the old-fashioned general store feeling alive with their candy sales areas.

Encouraging you to grab a bag and fill it up, the Brach’s kiosks offered a great way to get a nice variety of treats.  These diminutive delights were varied to my young palette, with some becoming lifelong favorites, while others remaining exotic strangers I would never get to know.

Some of you out there might remember the Brach’s areas in grocery stores as easy prey for “sampling hands”.  And I suppose they were good for that, too.  Though I never sampled off-the-books.  I was not a confectionery crook.  Though I recall friends of mine that were.

As a candy collector, the Brach’s bulk offerings don’t present an obvious appeal.  Typically lacking any kind of colorful wrapper, logo, or mascot (there are exceptions), the visual appeal of these cello wrapped treats was a combination of the color and shape of the goodies they contained.

So, as a collector, I was fortunate when I came upon a salesman display of Brach’s bulk offerings, from the era of my childhood, the 1970’s.  All presented as they were from my candy-isle memories. 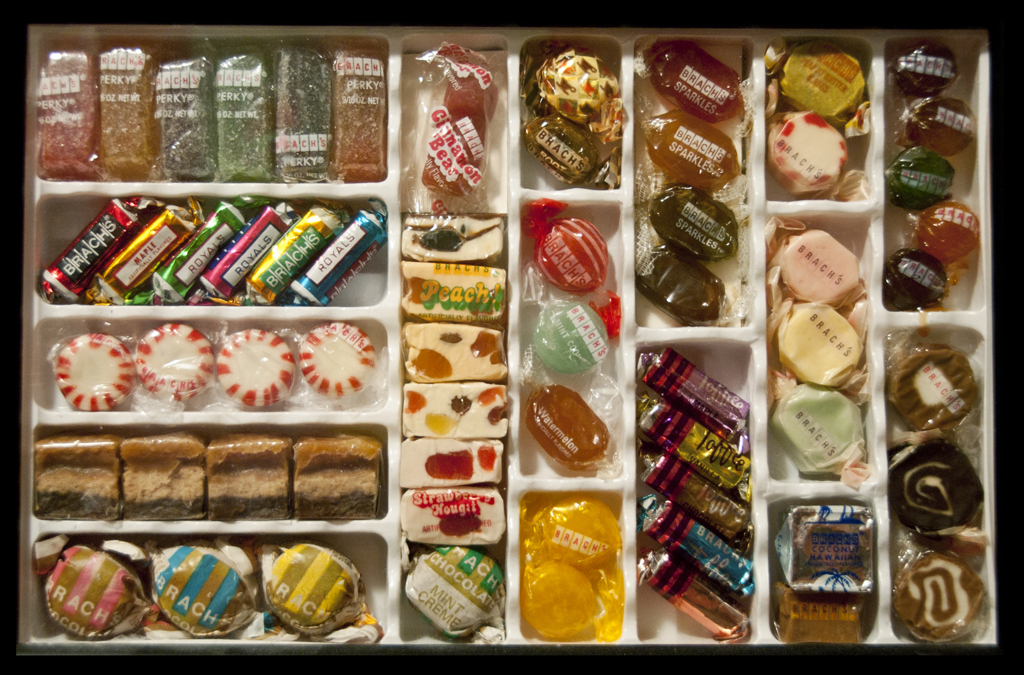 When I first found this display, I will admit to a bit of surprise and wonderment, at the condition of the candy it contained.  As I will later showcase here on CollectingCandy.com, after a certain number of years, most candy goes bad.  Let me rephrase that; it doesn’t go bad… it goes downright evil.   So, when I look at this, even now (it hangs in my living room), I am mystified as to why the candy appears as if it was plucked out of 1976.

I have theorized that the lack of confectionery-decomposition might be due to some kind of lacquering applied by the company for the sales kits – or perhaps it is simply a case of the pieces aging well.  I honestly don’t know, and I’m not able to do any more investigation without risk of damage to the pieces as they are.

Several childhood favorites are represented within the display, and I’d like to highlight a few – while also providing you a glimpse of these goodies you aren’t likely to see anywhere else. 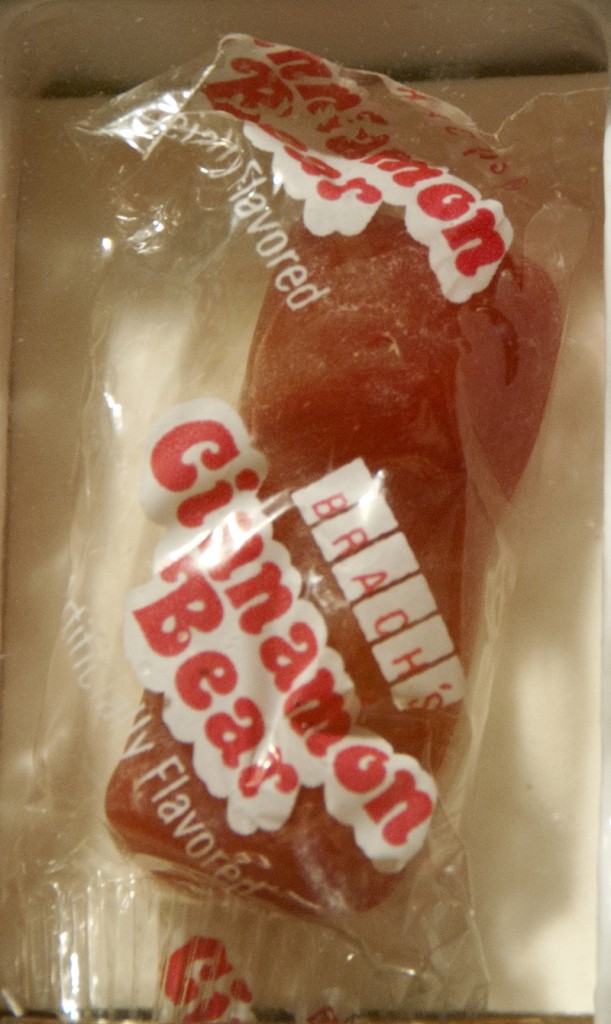 Brach’s Cinnamon Bears, or “giant” cinnamon bears as I called them, were a great bit of candy.  Being cinnamon, they were an automatic favorite of mine.

I’m especially fond of the Cinnamon Bear piece from the display.  When I look at the typeface and logo on that tiny cellophane wrapper, it takes me right back to that childhood grocery store, and countless candy bowls.  These bears were also large enough that, biting the head off of them provided a satisfying amount of chewy cinnamon, all by itself. 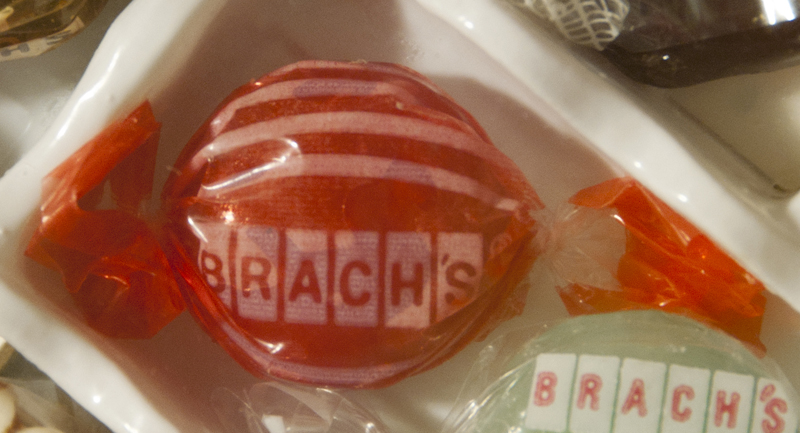 It is at this point you may have realized that I love cinnamon candies – I won’t apologize for it.  I hope I’m not boring you with them.  A-hem.

At first blush, there’s not much going on design-wise with these little wrappers, but they still have the power to evoke a memory.   When I see the same candies now, in their current modern wrapper, they do remain appealing and certainly delicious.  But there is something powerful about seeing them as you first had them, so long ago.  There is for me, at least. 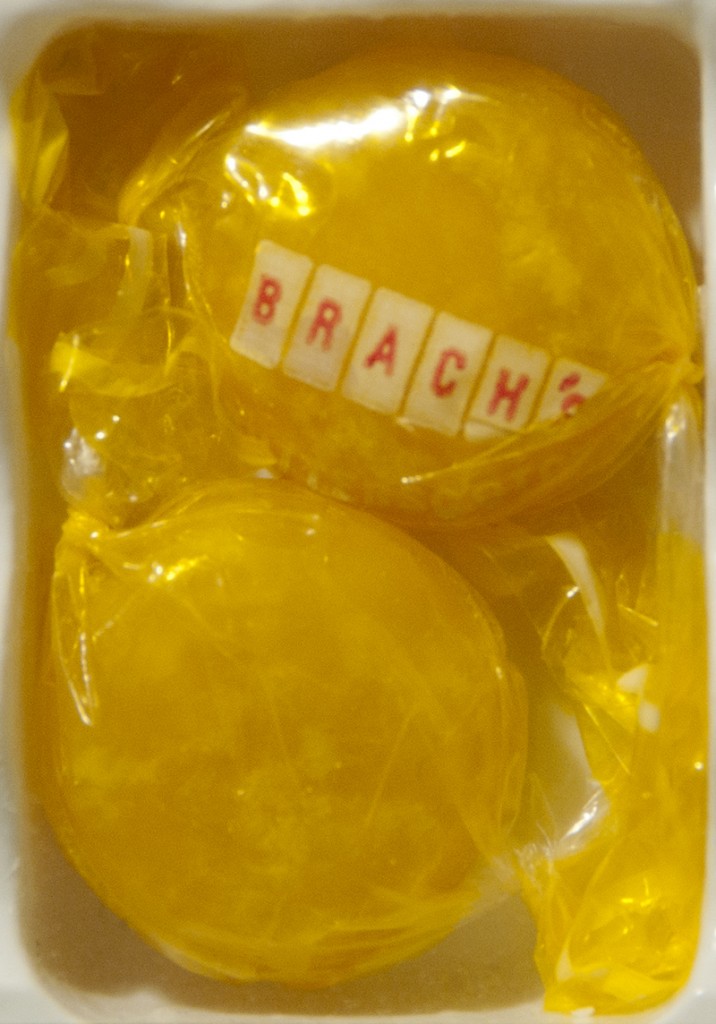 Once again, nothing too remarkable about the look or design for the similarly-packaged Butterscotch Disc, and yet it comes together for a powerful golden glow of goodness.  These were the safe-but-sweet alternative to those hot cinnamon discs. 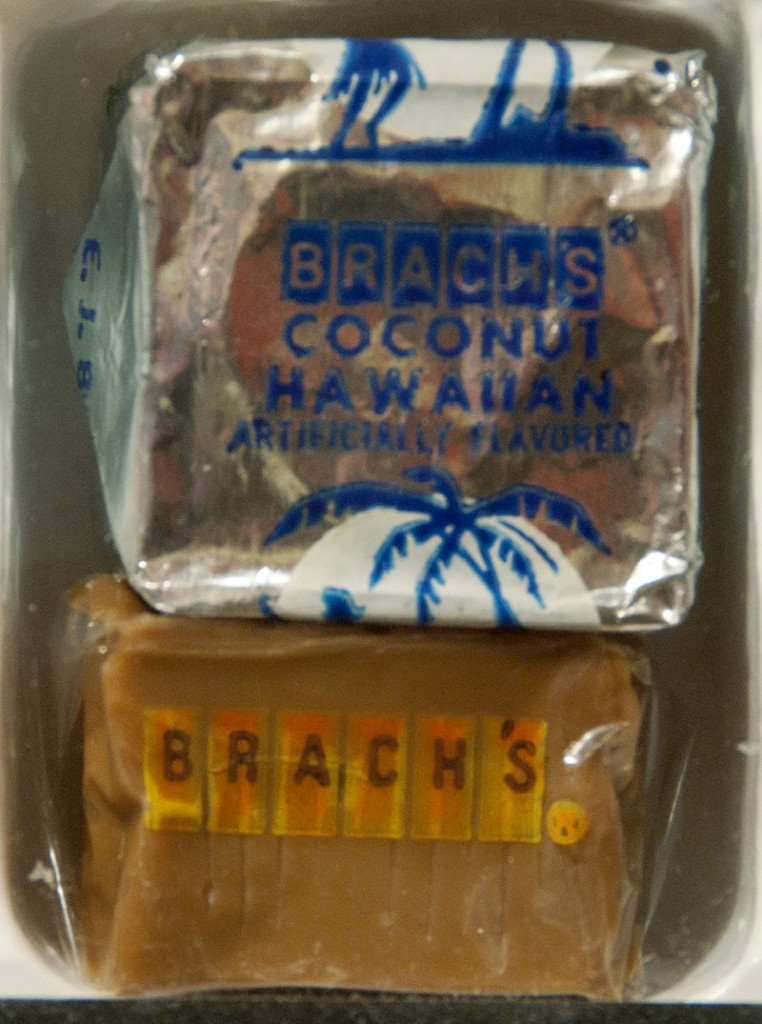 Moving past the Coconut Hawaiian – I was never a fan of coconut candies as a kid (admittedly that has changed as my tastes have broadened) – so I’ve included it here only because it shared a chamber with the caramel.

Brach’s Caramels were another favorite.  Easy to confuse with Kraft caramel squares, these were melt-in-your-mouth good, and likely responsible for at least a few of my early cavities.

Back in the day, I don’t think I quite understood Brach’s Royals.  I know I liked some of the flavors, but the others I wasn’t a fan of.  I would pick around the flavors I didn’t like, inspecting the foil wrapping, and when realizing it wasn’t “a good one”, I’d toss it back into the bowl, or wherever they were offered.

Over the holidays a few months ago, I saw the contemporary version of these (thanks to the return and relaunch of the Brach’s brand) and picked up a bag.  I found that these days, I love them all.  The colored foil on these vintage examples are striking in person, and they are probably some of the few Brach’s bulk-packaged pieces wrappers that could easily stand on their own, sans-candy.

Okay, Brach’s Perky’s were never my go-to Brach’s item.  I’m highlighting them here primarily because, at a point, they were sold in the regular candy isle, as well as the bulk.  I have an ad to prove it. 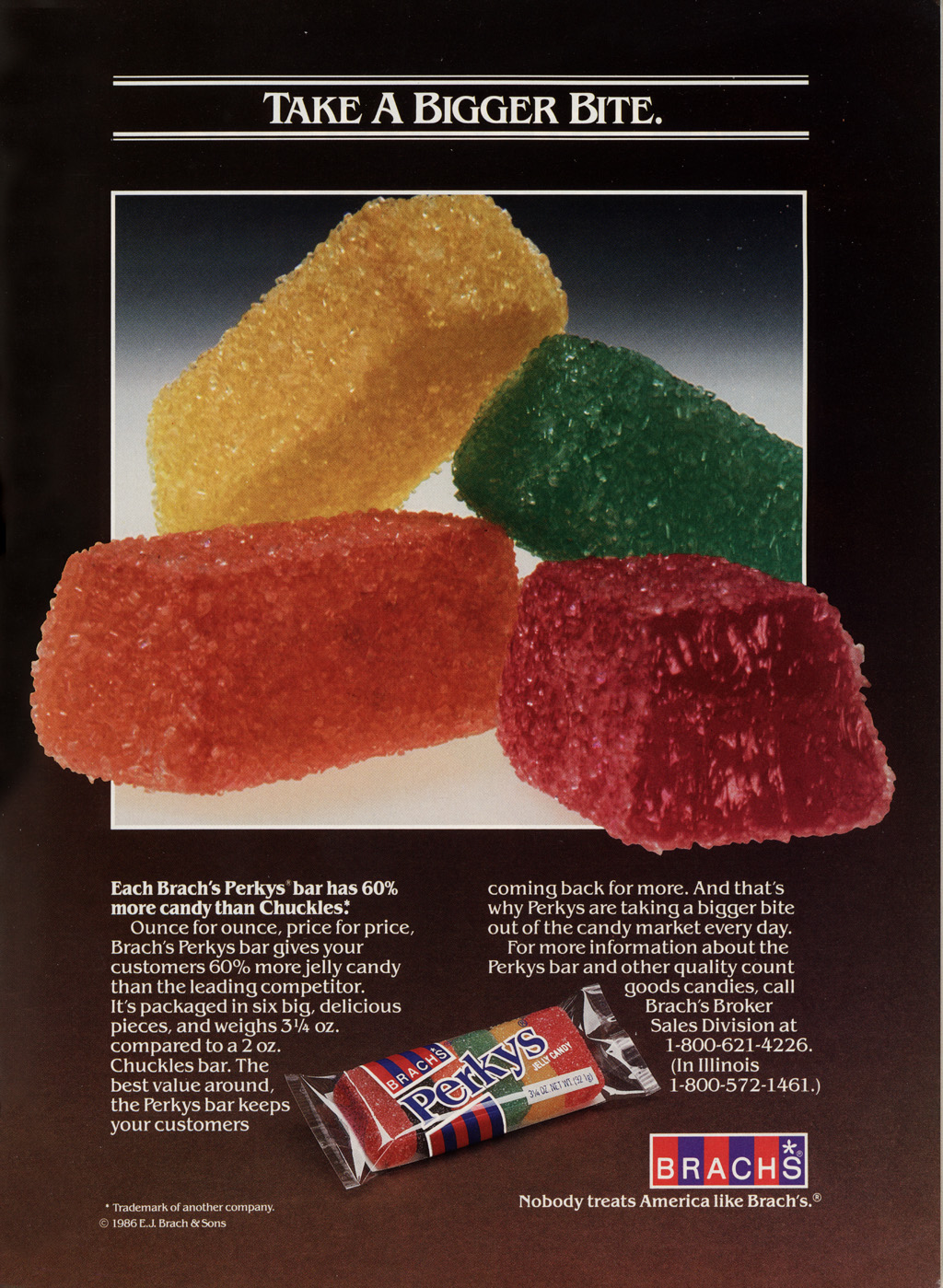 This ad directly and slavishly mocked a Chuckles ad from the era, but I’m saving that comparison for another time.

Wrapping up with some flavorful Brach’s goodness – here’s a lovely Brach’s magazine advertisement from 1960. 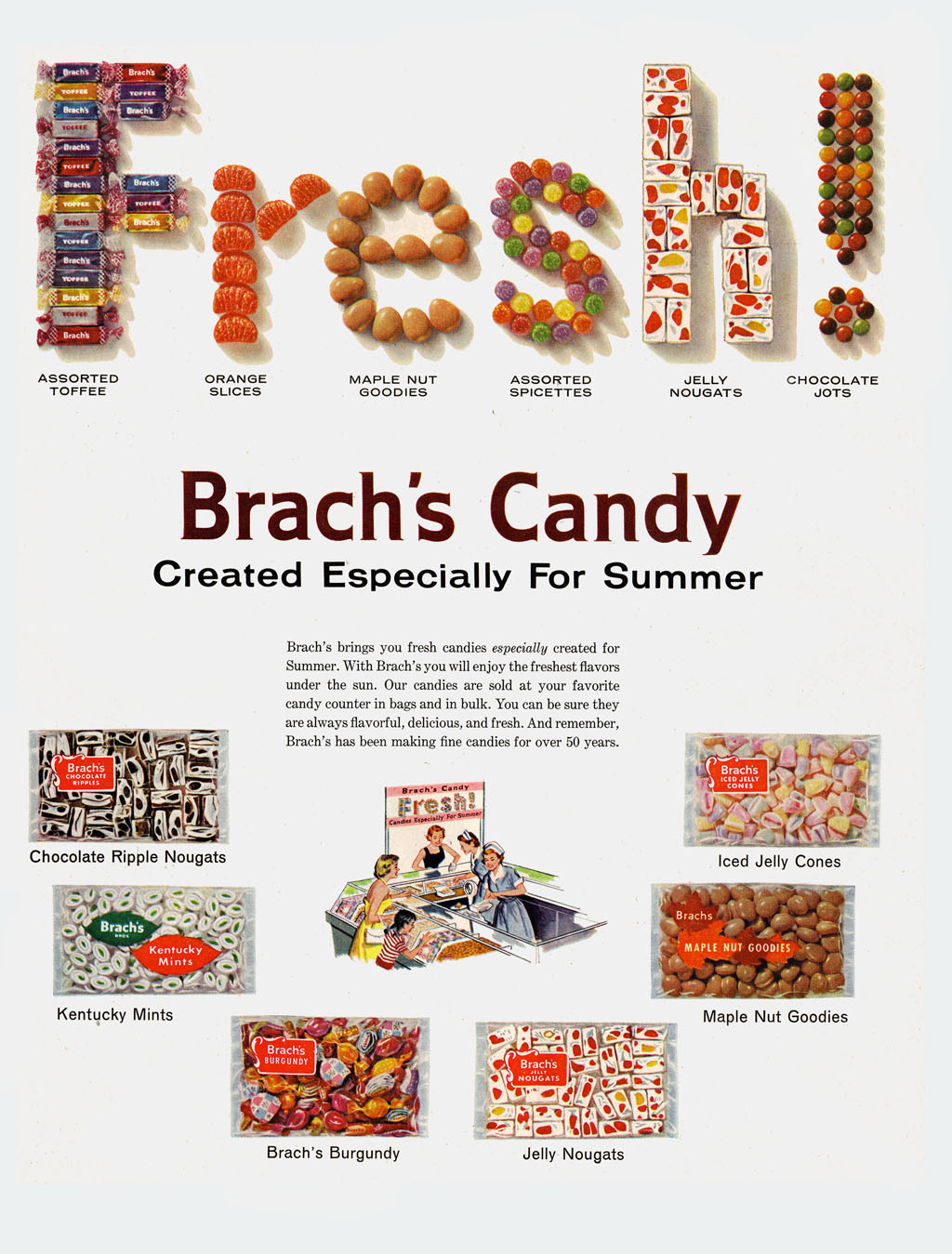 A New York City based writer, editor and sometimes actor. After spending much of the 1990′s in the comic book business helping tell the stories of Marvel Comics’ X-Men as series editor, he has since split his time between developing his own entertainment properties while still consulting and working on others. Having been described as “the Indiana Jones of lost and forgotten candy”, Jason is one of the country’s premier candy collectors and historians with his discoveries appearing in countless blogs, magazines, newspaper articles, and books. Always happy to share his knowledge and unique perspectives on this colorful part of our popular culture, Jason has consulted with New York’s Museum of Food and Drink and has also been a featured guest on Food Network’s Heavyweights, France’s M6 Capital, and New York’s TheActionRoom.com. My Google Profile+
View all posts by Jason Liebig →
This entry was posted in 1970's and tagged 1970's, 70's, Brach's, candy, collectible, collecting, confection, holiday, Jelly Nougat, packaging, PIck-A-Mix, retro, sugar, sweets, vintage, wrapper. Bookmark the permalink.