Always an enjoyable topic to address are the holiday releases for M&M’s.  Just a few days ago I mentioned the new holiday flavor release of M&M’s Gingerbread and today I’d like to showcase the new Christmas-themed theater-sized boxes for a pair of M&M’s classic offerings.

Though M&M’s have a long history of fantastic larger-sized holiday packages, it is only in the last couple of years that they’ve really been bringing the holiday goodness to their smaller packaging.  In past articles I’ve noted the holiday M&M’s pack releases for Valentine’s Day, Easter, Halloween and Christmas.  Last year was the first time I picked up  M&M’s theater sized boxes with holiday designs when I spotted their Halloween boxed releases.

Very much in the vein of those Halloween boxes come this year’s Christmas-themed M&M’s theater-sized boxes.  Here they are: 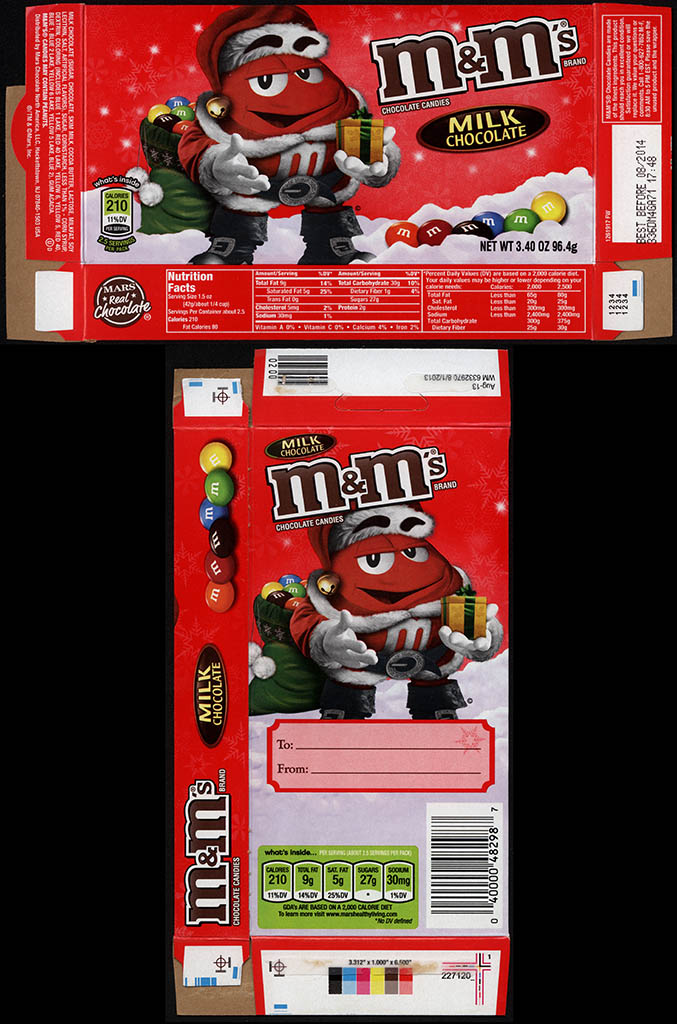 As we’ve come to expect, the M&M’s mascots are in full humor and attitude on these boxes.   Note the addition of a blank To/From section on the back of each box, making them perfect for gift-giving.  These would seem to be perfectly-sized for stocking stuffers, and they’re fun additions to my M&M’s packaging collection.

A New York City based writer, editor and sometimes actor. After spending much of the 1990′s in the comic book business helping tell the stories of Marvel Comics’ X-Men as series editor, he has since split his time between developing his own entertainment properties while still consulting and working on others. Having been described as “the Indiana Jones of lost and forgotten candy”, Jason is one of the country’s premier candy collectors and historians with his discoveries appearing in countless blogs, magazines, newspaper articles, and books. Always happy to share his knowledge and unique perspectives on this colorful part of our popular culture, Jason has consulted with New York’s Museum of Food and Drink and has also been a featured guest on Food Network’s Heavyweights, France’s M6 Capital, and New York’s TheActionRoom.com. My Google Profile+
View all posts by Jason Liebig →
This entry was posted in Boxed, Christmas, Holiday, M&M's, Mars and tagged candy collecting, candy collection, candy collector, candy wrapper collection, candy wrapper collector, Christmas, collectible, collecting candy, confectionery, confections, holiday, M&M's, mascot, packaging, sweets, vintage candy wrapper, wrapper. Bookmark the permalink.