My Quest to Find all of Hershey’s Current King Size Bars!

A few weeks ago, I set about to pick up examples of each of the current Hershey family “King Size” bars.  I figured it would be cool to have whatever few wrappers they produced with the unifying “King Size” wedge call-out graphic.   But what started out as a simple search would lead me to finding twenty-seven variety of King Size offerings across four different states!

As a candy collector, you quickly realize there are no established collector “conventions” or rules.  This isn’t stamp or coin collecting after all, and there are no guidelines other than ones you can just decide you want to have for yourself.   I love that aspect of collecting candy packaging.

So it was that I found myself recently looking over some vintage wrappers, paying particular attention to a series of Hershey branded bar wrappers from the early 80’s that all featured a “33% larger” graphic to them (I’ll be covering these in detail in a separate post soon). 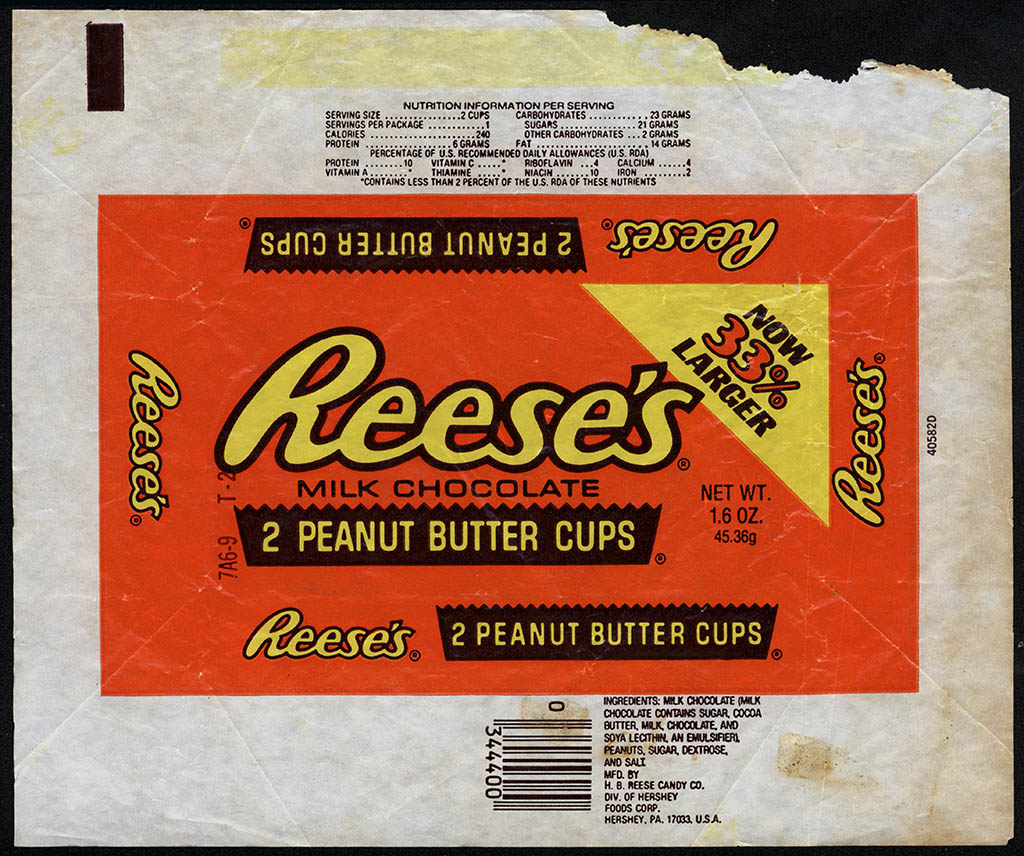 I liked how the 33% corner graphic unified the diverse wrappers and I realized I could find a modern equivalent to them.  That modern equivalent was the Hershey “King Size” offerings, so the next day I immediately set out to get them all.

Within the first day I had found a dozen variety, and I wondered what other brands would feature King Size versions.  I hadn’t found a Reese’s Pieces King Size in those first few hunts, but I was sure there had to be one of those out there.  Or perhaps I’d found them all?

A trip upstate the following weekend and a number of stops along the way would expand my King Size “set” to nearly twenty, including the Reese’s Pieces I was wondering about.  I would find the Zero bar King Size and Watchamacallit King Size offerings to be more unexpected than others.

Over this last week, where I found myself traveling across a number of states and back, I have ended up with twenty-seven different Hershey King Size “wedge” wrappers, as well as a few stragglers that don’t feature that same graphic flare, but are Hershey family King Sizes.  Even after searching over a dozen spots here in New York state, it wasn’t until Ohio that I’d find a King Size Heath and Hershey Special Dark.

The distribution of these was far from consistent, though the King Size versions seemed to be more popular in spots like 7-Eleven and other roadside gas station candy isles.

In just a few short weeks, I’ve amassed quite an array, and here they all are laid out together. 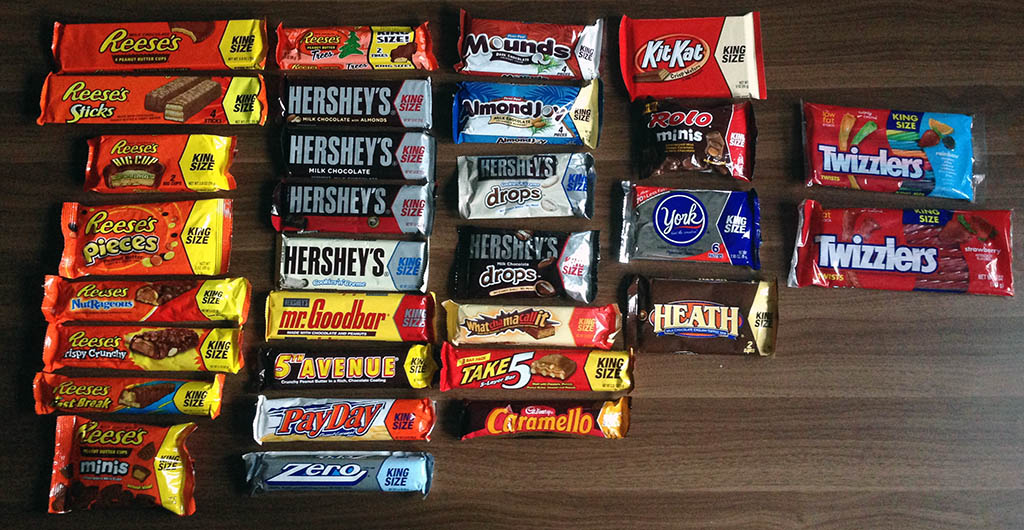 All The 2012 Hershey King-Sizes I could find.

I can’t be certain but I’ll speculate that I could still be missing a few offerings.  Perhaps there is a Reese’s White Chocolate and Reese’s Dark King Size as well as a Kit Kat Dark and Kit Kat White Chocolate King Size.  Beyond those possible outliers, I can’t guess what other offerings could be included in this assortment.  Anyone ever see any that I don’t have?

Regular visitors may remember my post detailing the variety of Mars’ extra-large offerings; Mars’ 2-to-Go and 4-to-Go — Mighty Big Wrappers!  I thought those were a big assortment of large bars, but I had yet to encounter the Hershey King Size family.

So, while I may have started out satisfied to collect simply an example of each version of a brand wrapper’s overall design, I now find myself determined to also include examples of these major size variations.  Where there are unifying graphical elements, I think they make awesome sets to look at.   They’re certainly fun to hunt for.

And that’s everything I have on Hershey’s King Sizes today.  When I get to removing and flattening all of these, I may revisit this topic with a detailed look at each individual wrapper.  For now, I’ll say goodbye and I’ll see you next time!

A New York City based writer, editor and sometimes actor. After spending much of the 1990′s in the comic book business helping tell the stories of Marvel Comics’ X-Men as series editor, he has since split his time between developing his own entertainment properties while still consulting and working on others. Having been described as “the Indiana Jones of lost and forgotten candy”, Jason is one of the country’s premier candy collectors and historians with his discoveries appearing in countless blogs, magazines, newspaper articles, and books. Always happy to share his knowledge and unique perspectives on this colorful part of our popular culture, Jason has consulted with New York’s Museum of Food and Drink and has also been a featured guest on Food Network’s Heavyweights, France’s M6 Capital, and New York’s TheActionRoom.com. My Google Profile+
View all posts by Jason Liebig →
This entry was posted in Hershey and tagged 2012 candy, 2012 candy wrappers, candy collecting, candy collection, candy collector, candy wrapper collection, candy wrapper collector, collectible, collecting candy, confectionery, confections, Hershey, King Size, packaging, Reese's, sweets, vintage candy wrapper, wrapper. Bookmark the permalink.

2 Responses to My Quest to Find all of Hershey’s Current King Size Bars!