To all of CollectingCandy.com’s readers that celebrate it; Happy Thanksgiving!  Today I’ll be sharing the only candy wrapper I could find created specifically for Thanksgiving – a holiday not known for store-bought candy.

Before I get to the candy, I wanted to mention that I just finished watching the parade on TV.  I’ve got a tradition for my Thanksgiving each year, and that’s to start my day with the Macy’s Thanksgiving Day Parade broadcast.  I’ve been watching it since I was a kid, and I always make sure I see at least part of it every year.  Living in New York City, I’ve even had the pleasure of watching the parade in-person (once from a super-cold rooftop and two other times from the comfort of friends’ offices on Broadway).  It’s one of the fun things I always look forward to every year – and I’m sure it’s a tradition for a lot of us.  It might be a bit corny, but I love it and it always puts me in the holiday mood.

So let’s get back to the Thanksgiving candy.  Here it is; a Whitman’s Chocolate-Covered Marshmallow Turkey wrapper from 1979: 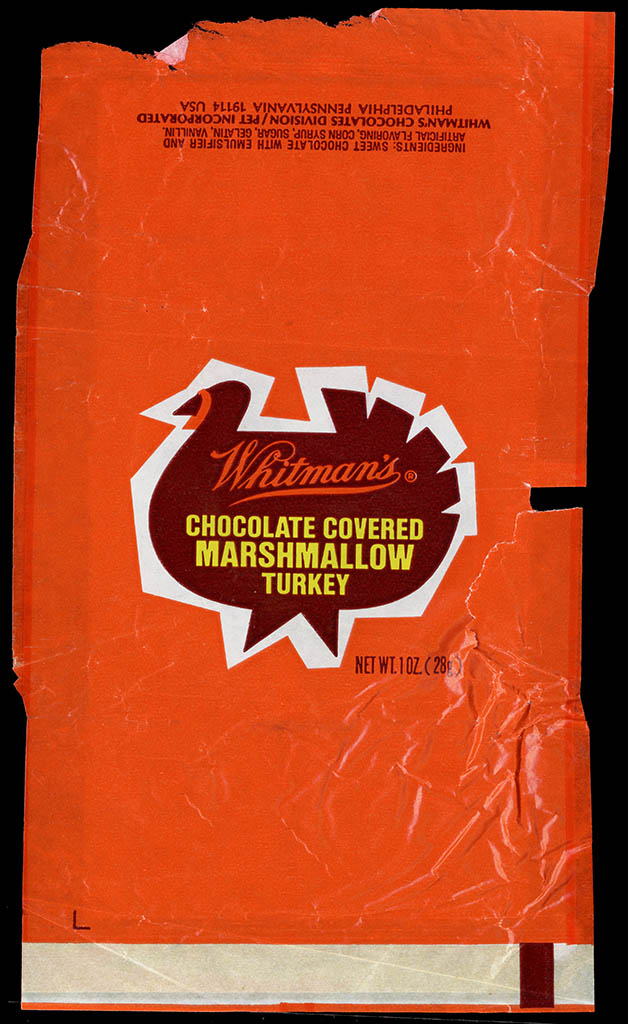 This reminds me that holiday candy goes straight from Halloween to Christmas, leaving Thanksgiving to be skipped over.   I have to admit that I do enjoy two months of Christmas candy.

While we do get a bit of Autumn-themed candy packaging these days, it’s not the same thing.  In light of that, I was happy that I was able to find at least one piece clearly produced for Thanksgiving.  I think it’s a pretty neat piece.

I hope everyone enjoys their day today with nothing but good food, family, and loved ones.

I’ve got some family to call and some cookin’ to do, so for now I’ll sign off.  Happy Thanksgiving!!  See you next time!

A New York City based writer, editor and sometimes actor. After spending much of the 1990′s in the comic book business helping tell the stories of Marvel Comics’ X-Men as series editor, he has since split his time between developing his own entertainment properties while still consulting and working on others. Having been described as “the Indiana Jones of lost and forgotten candy”, Jason is one of the country’s premier candy collectors and historians with his discoveries appearing in countless blogs, magazines, newspaper articles, and books. Always happy to share his knowledge and unique perspectives on this colorful part of our popular culture, Jason has consulted with New York’s Museum of Food and Drink and has also been a featured guest on Food Network’s Heavyweights, France’s M6 Capital, and New York’s TheActionRoom.com. My Google Profile+
View all posts by Jason Liebig →
This entry was posted in 1970's, Chocolate, Holiday and tagged candy collecting, candy collection, candy collector, candy wrapper collection, candy wrapper collector, collectible, collecting candy, confectionery, confections, packaging, sweets, Thanksgiving, Thanksgiving candy, vintage candy wrapper, wrapper. Bookmark the permalink.

1 Response to Happy Thanksgiving from CollectingCandy.com!