Today is Thanksgiving here in the United States and for so many of us that means a mix of family, food, football, and friends.  Where branded candy is concerned, Thanksgiving tends to be one of the overlooked holidays but over the years I’ve pulled together a number of applicable pieces and today I’ll be showcasing them.  Make the jump to check them out!

For reference, a couple of the items I’m sharing today were originally presented in my Thanksgiving posts from 2012 and 2014 respectively.  I bring those previously-shown items back today as a way to allow the Thanksgiving-branded candy packages to be enjoyed collectively.   While Autumn-themed candy packaging is quite common these days, you almost never see Thanksgiving focused stuff.

So let’s get to them.

First up is one of my favorites; a wrapper for Whitman’s Chocolate Covered Marshmallow Turkey from 1979. 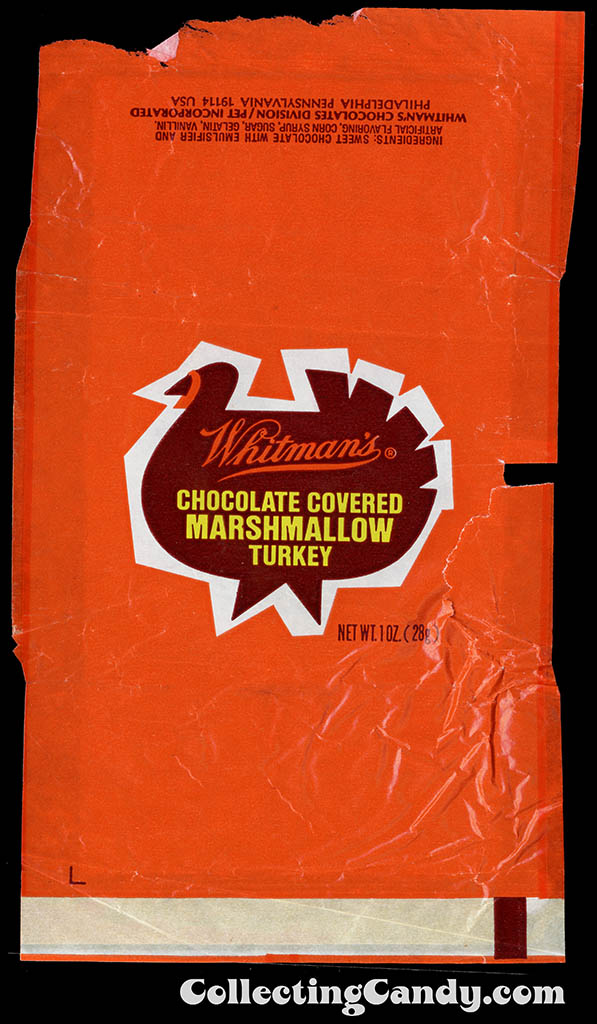 Another chocolate-covered marshmallow Turkey piece I shared before is this Russell Stover foil wrapper: 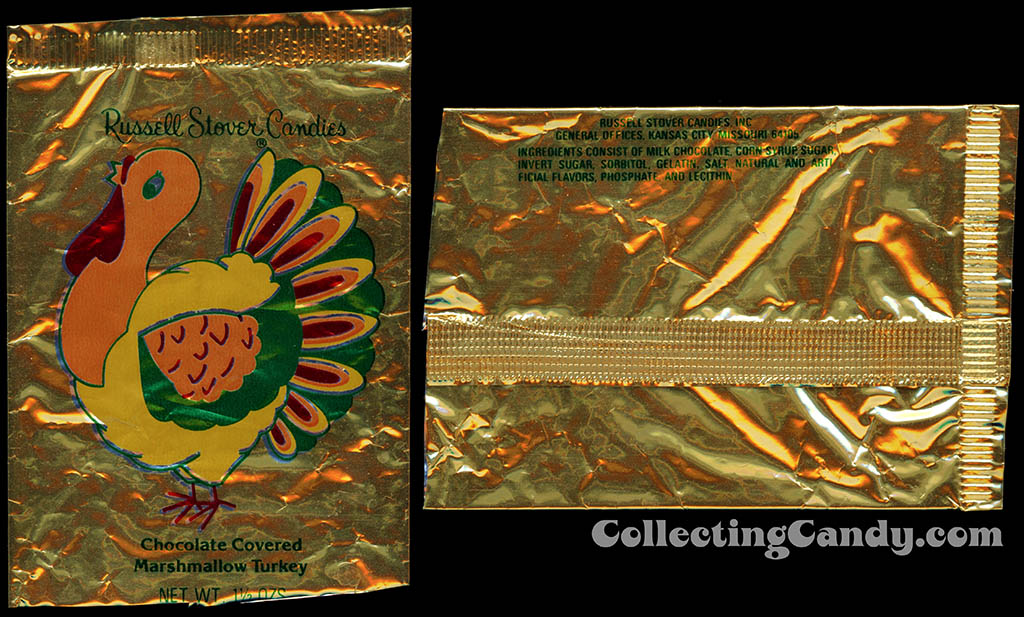 That covers the turkey tradition of the holiday pretty well, so now let’s take a look at two pieces of packaging that have never been presented anywhere online before today.  These are both going to be CollectingCandy.com exclusive world premiers.  For the next two, it is the traditional Thanksgiving imagery of the pilgrim that takes the stage: 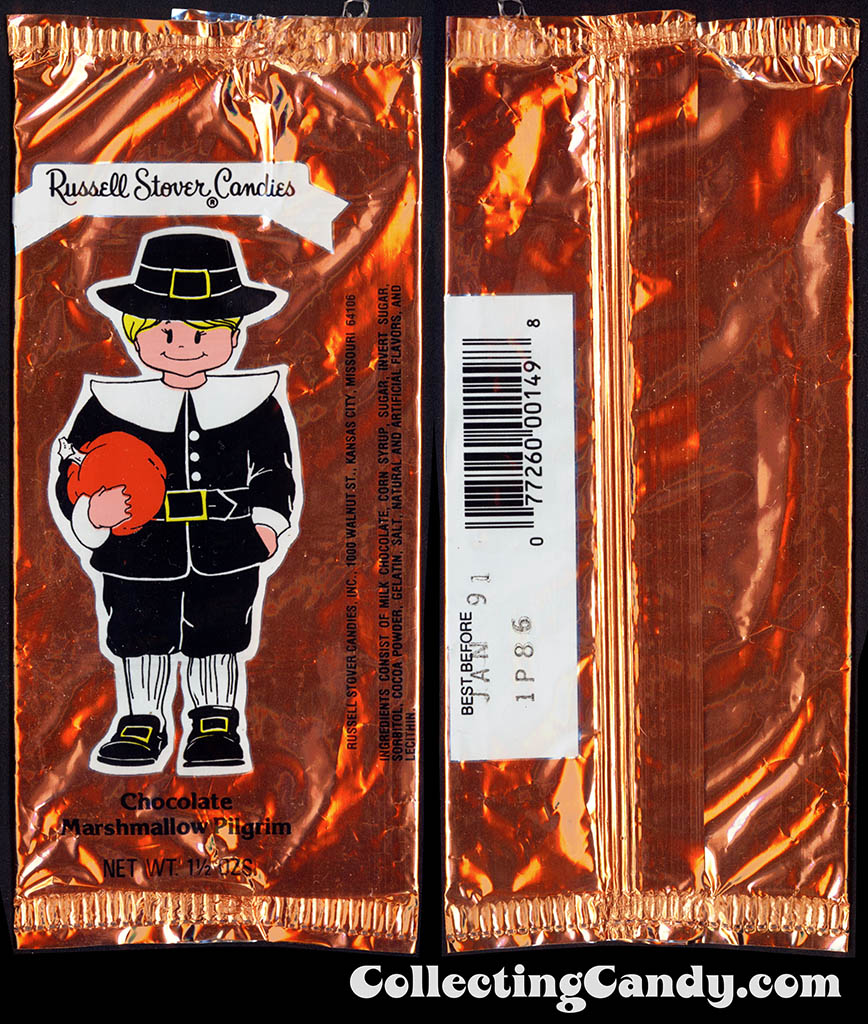 And finally, a foil wrapper from the Fanny Farmer company for what I’m guessing was some kind of chocolate covered (marshmallow?) treat.  I’ve dated this one as “circa-1980” due to a date of acquisition written on the back, but I’m thinking it could actually originate from a decade earlier, based on the lack of a UPC code [Though it is worth noting that the lack of UPC could could also be due to this being part of a pre-packaged boxed assortment.]  For now, 1980 is a reasonable guess:

So once again, that is the extent of the Thanksgiving confectionery wrappers I have to share today.  It’s only a few and while Thanksgiving candy wrappers are rare birds, at least we can all see that they do exist.

With that, I hope you are otherwise enjoying a day off with family, food, friends, football or any combination there of.  See you next time and HAPPY THANKSGIVING!! 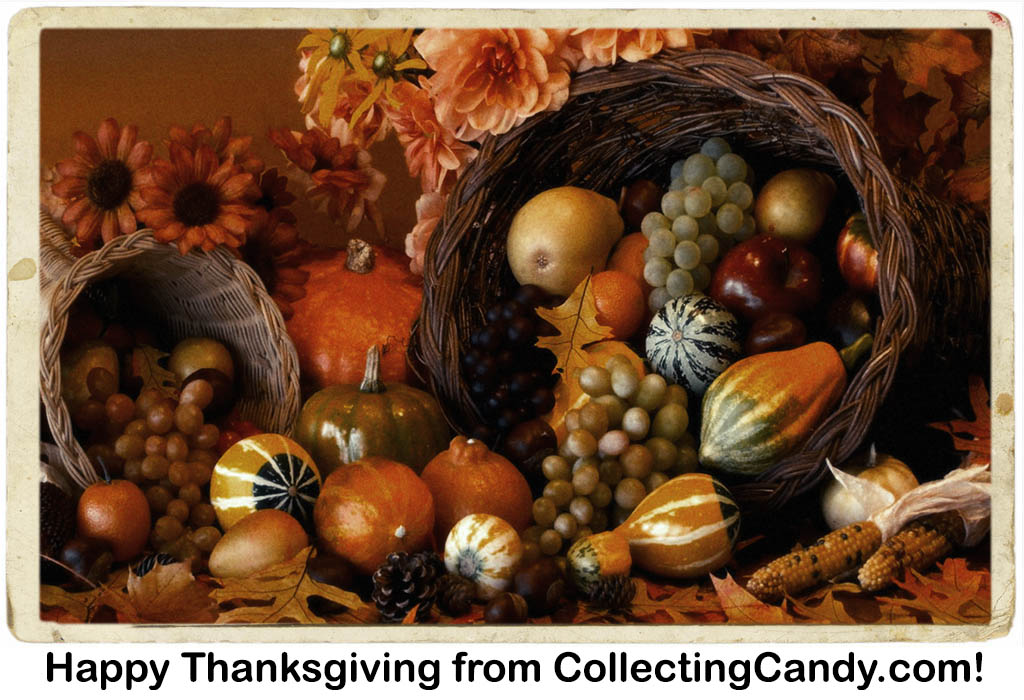 A New York City based writer, editor and sometimes actor. After spending much of the 1990′s in the comic book business helping tell the stories of Marvel Comics’ X-Men as series editor, he has since split his time between developing his own entertainment properties while still consulting and working on others. Having been described as “the Indiana Jones of lost and forgotten candy”, Jason is one of the country’s premier candy collectors and historians with his discoveries appearing in countless blogs, magazines, newspaper articles, and books. Always happy to share his knowledge and unique perspectives on this colorful part of our popular culture, Jason has consulted with New York’s Museum of Food and Drink and has also been a featured guest on Food Network’s Heavyweights, France’s M6 Capital, and New York’s TheActionRoom.com. My Google Profile+
View all posts by Jason Liebig →
This entry was posted in 1980's, 1990's, Chocolate, Holiday and tagged candy collecting, candy collection, candy collector, candy wrapper collection, candy wrapper collector, collectible, collecting candy, confectionery, confections, holiday, packaging, packaging design, pilgrim, seasonal, sweets, Thanksgiving, turkey, vintage candy wrappers, wrapper. Bookmark the permalink.