It’s always fun for me to discover some piece of candy history that I was never aware of before – and such was the case with Hershey’s M&M’s-like product, Hershey-ets.

Introduced sometime in the early 1950’s, it seems clear that they were intended to be a direct competitor to M&M’s.  A small, candy-coated round tablet of chocolate in multiple colors.   They’re still around today, at least during certain times of the year, but even so,  you may have never heard of them.  But I’ll get to that in a moment.

Here are the historical Hershey-ets pieces I’ve been able to bring together.

First up is a package that I believe represents the earliest style put on sale.  It features a “new” call-out right on the wrapper: 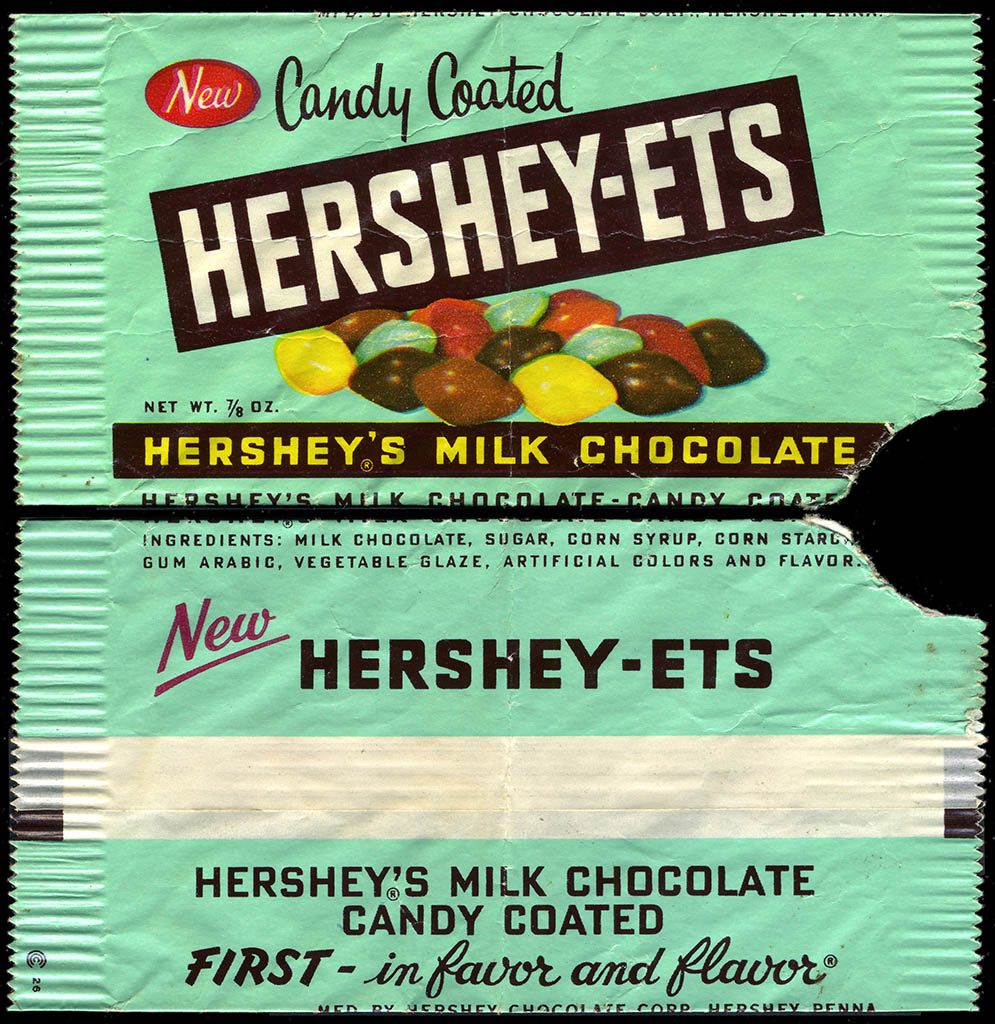 I think you’ll agree that the color and type work are quite evocative of the era they were created in.  I can also show you a later-run proof of this wrapper that lacks the “New” designation: 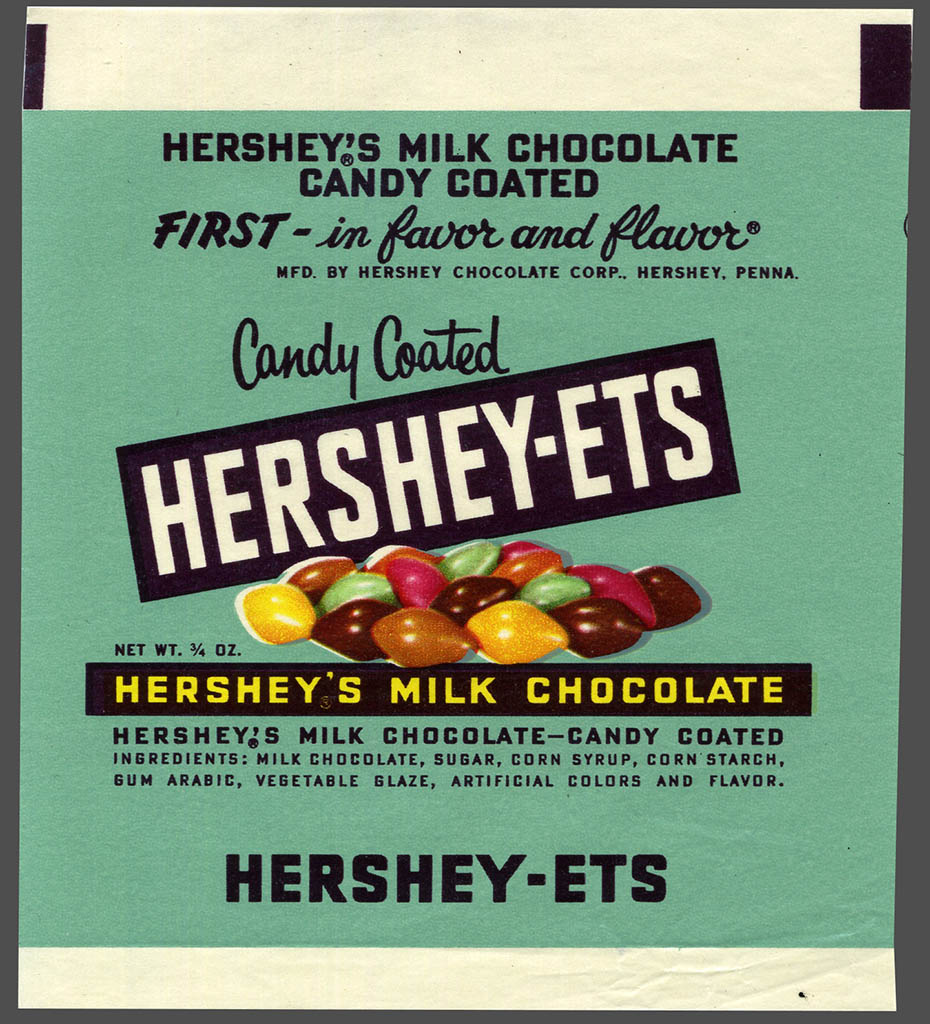 Here’s a mint-flavored version from this same era.  Though these don’t actually call themselves Hershey-ets on the wrapper, it’s pretty clear that’s what they are: 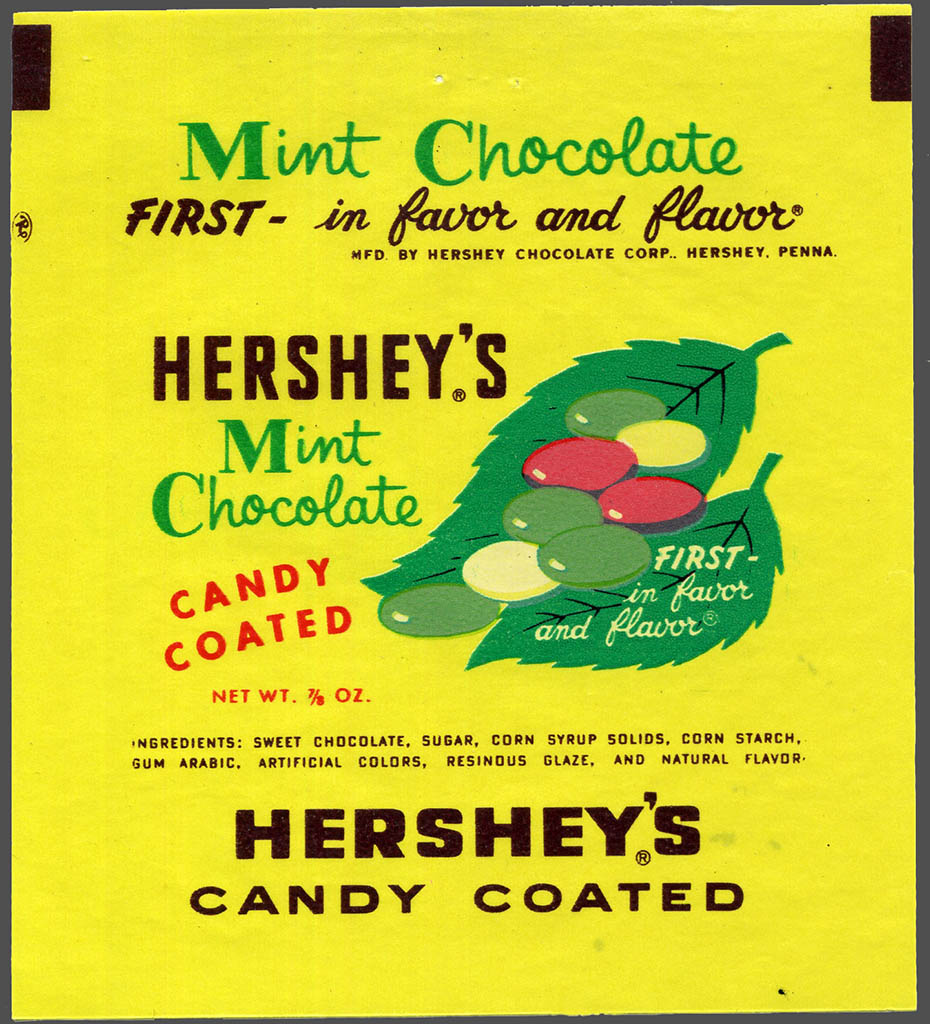 Hershey-ets were also sold boxed in the 1950’s as you can see here: 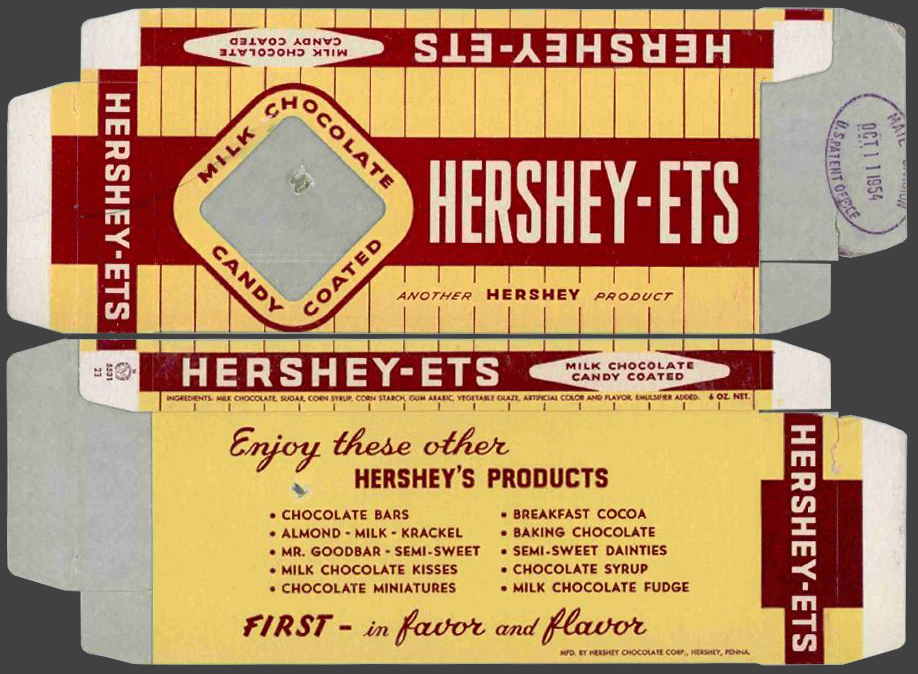 Like so many confections through the years, Hershey sold Hershey-ets through 5-cent vending machines.  I’m fortunate to have an example of a vending insert card for one: 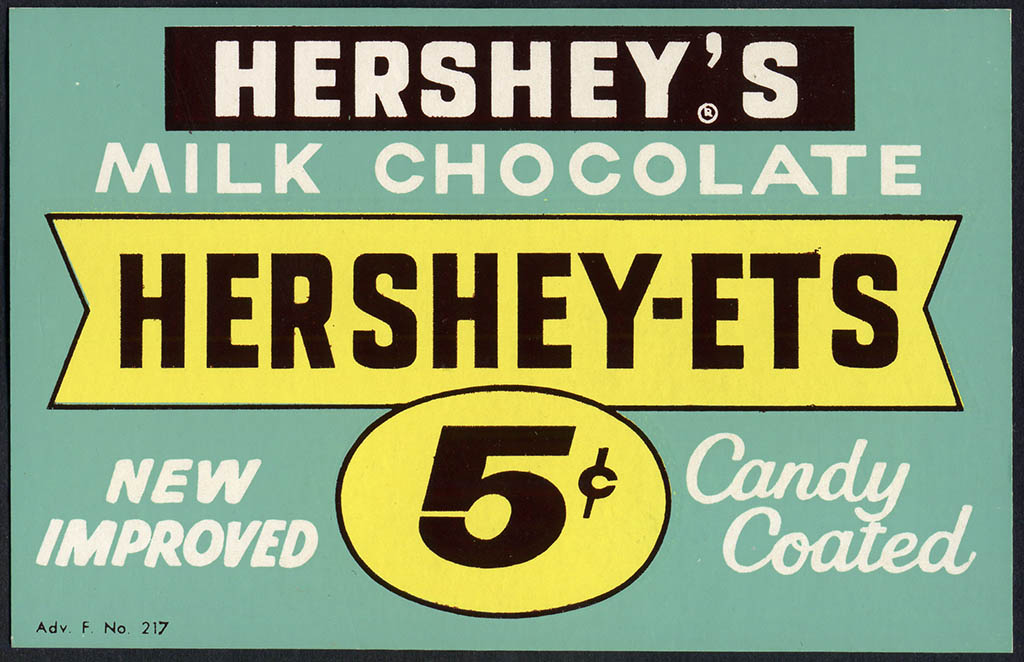 That classic 1950’s package design would eventually see a major refresh in 1963, as indicated in this candy trade news clipping: 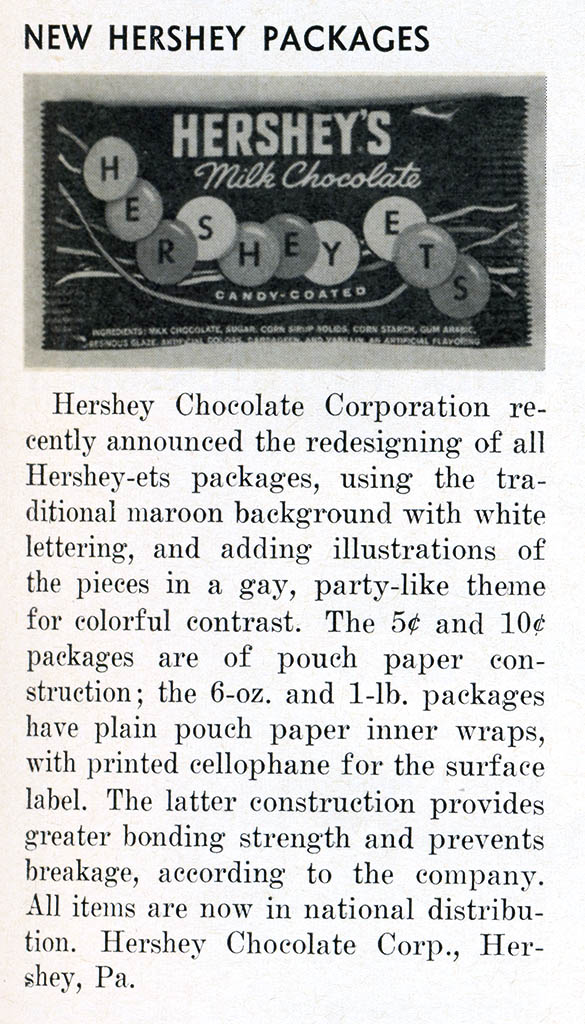 I’ve been hunting for one of those 1963 packs for a few years to no avail.  Eventually I’ll track one down but for now I’ll share an example from a friend’s collection: 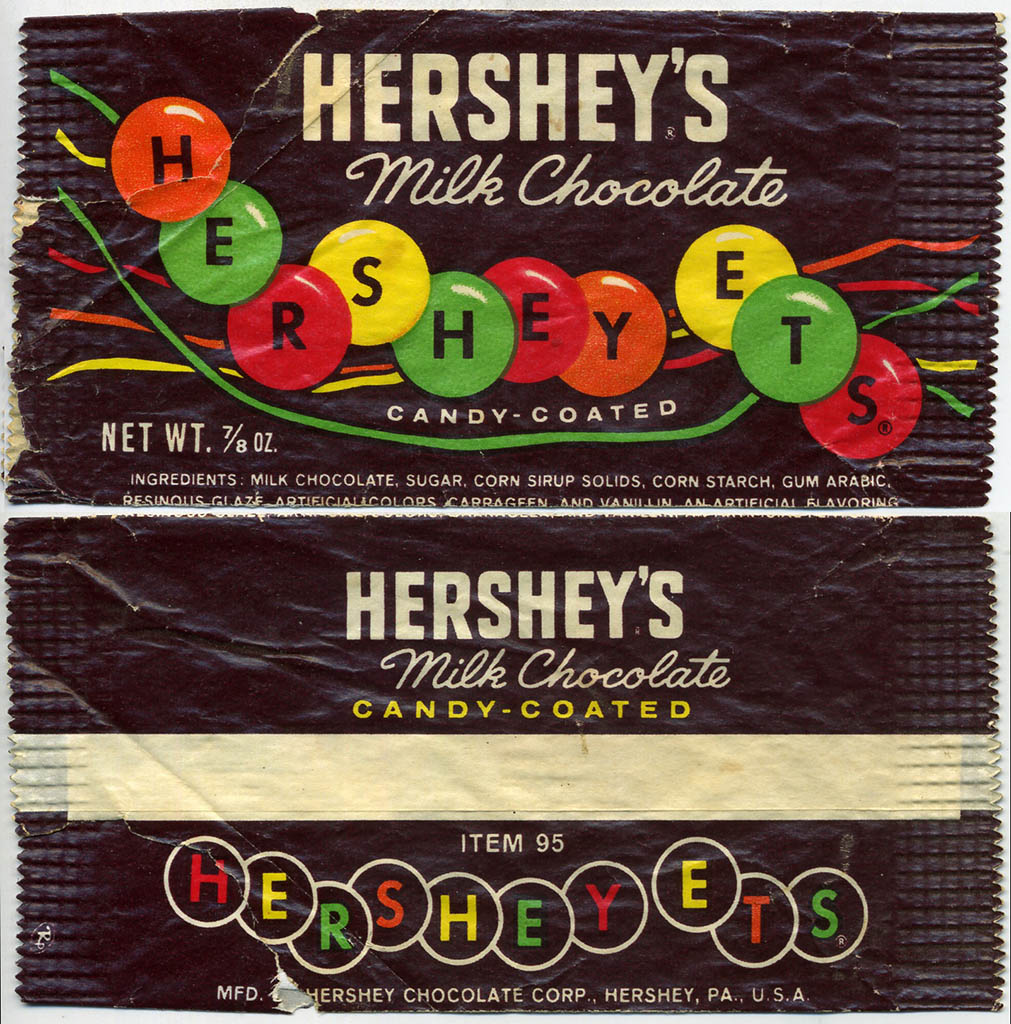 From what I’ve found, by the 1970’s Hershey-ets were no longer being sold in standard-size candy packs.  At least not here in the United States.  I have tracked down a standard-sized candy box that was still being sold in Canada in the 1970’s.  It’s quite a departure from what was seen in the USA, and I like it quite a lot. 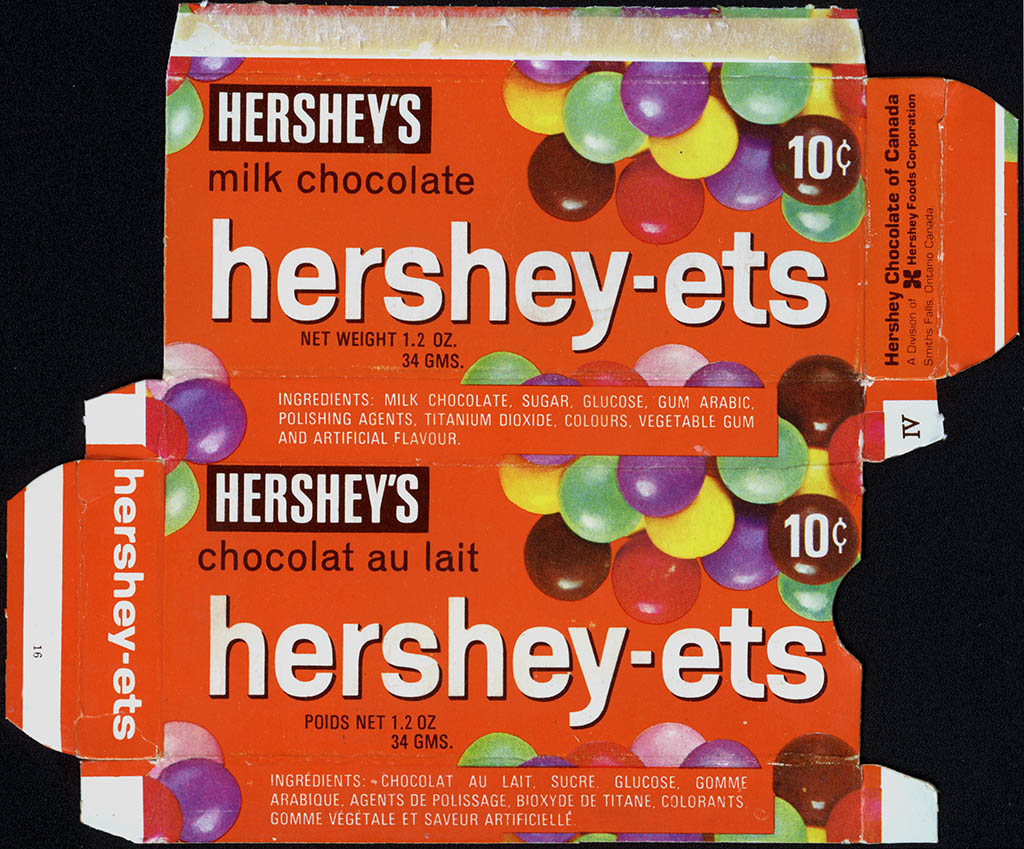 As I said at the top of today’s post, Hershey-ets are still being produced, but you might not notice them unless you do a bit of baking.  Here’s an example of a Hershey-ets package that you might have found in the 1970’s or 1980’s: 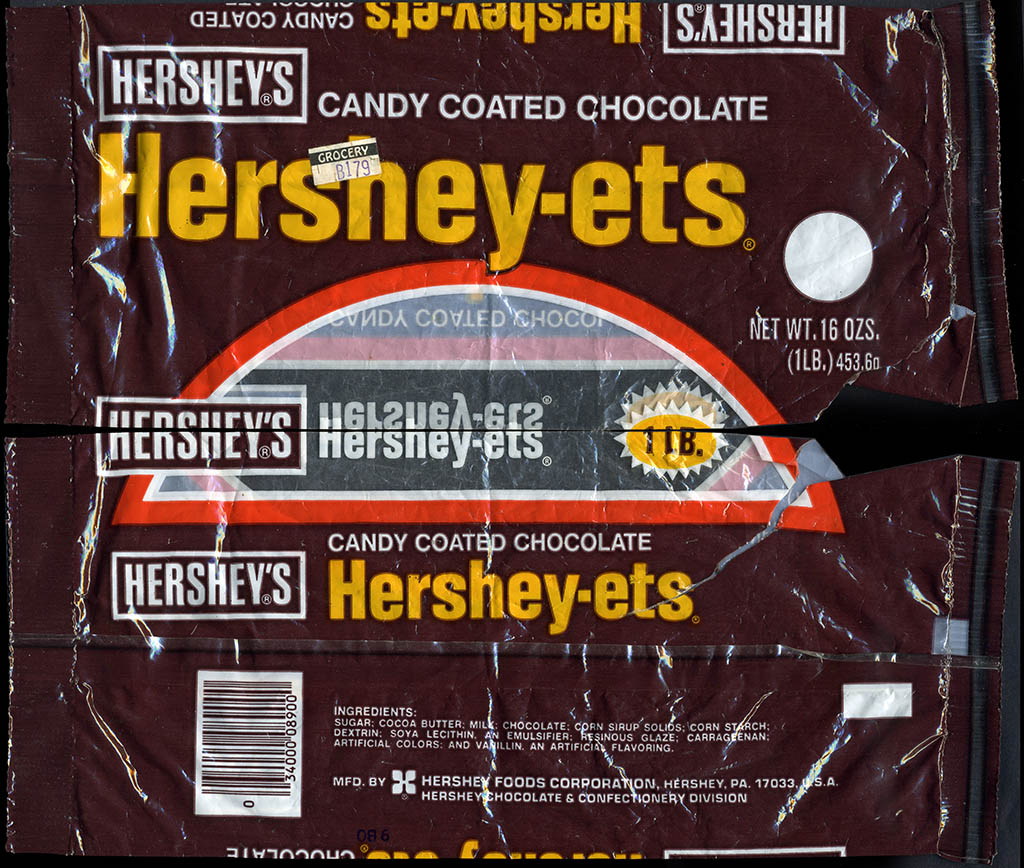 The other place you might recognize Hershey-ets from would be holiday tubes from Hershey.   I feel like I never see them, but my good friend Cybele over at CandyBlog.net did a fantastic write up of them back in 2009.  She features the current version of Hershey-ets and also does a direct comparison to current M&M’s – check it out here.

So, Hershey-ets started as a competitor to M&M’s and while they didn’t find long-term footing in that area, they would eventually find their own way in the world of candy.

Of course, Hershey’s haven’t thrown in the towel on the candy-coated chocolate category.  Not by a long-shot.  If you’ve visited a candy isle in the last few years, you’ve undoubtedly encountered Hershey’s latest answer to M&M’s; their lineup of candy-coated Pieces.   Building on the success of Reese’s Pieces, they’ve now got York Peppermint Pieces, Almond Joy Pieces, and Hershey’s with Almond Pieces.  But that’s an article for another day.

For now, that’s everything I have on Hershey’s original answer to M&M’s – Hershey-ets.

A New York City based writer, editor and sometimes actor. After spending much of the 1990′s in the comic book business helping tell the stories of Marvel Comics’ X-Men as series editor, he has since split his time between developing his own entertainment properties while still consulting and working on others. Having been described as “the Indiana Jones of lost and forgotten candy”, Jason is one of the country’s premier candy collectors and historians with his discoveries appearing in countless blogs, magazines, newspaper articles, and books. Always happy to share his knowledge and unique perspectives on this colorful part of our popular culture, Jason has consulted with New York’s Museum of Food and Drink and has also been a featured guest on Food Network’s Heavyweights, France’s M6 Capital, and New York’s TheActionRoom.com. My Google Profile+
View all posts by Jason Liebig →
This entry was posted in 1950's, 1960's, 1970's, 1980's, Canadian, Chocolate, Hershey, Holiday, M&M's and tagged candy collecting, candy collection, candy collector, candy wrapper collection, candy wrapper collector, collectible, collecting candy, confectionery, confections, packaging, sweets, vintage candy wrapper, wrapper. Bookmark the permalink.