As we rapidly approach Halloween (it’s here tomorrow!), I realize that it’s been a pretty packed month on the site but it’s gone really fast.  I thought I would have trouble filling 31 posts with nothing but Halloween candy content, but as it turns out I’ve got more than I had room to post about.  Guess I’ll have to save a few things for next year.

For today’s post, I’ve selected the Kit Kat items from my collection that were specifically produced for the Halloween holiday.  Kit Kat is one of the all-time classic confectionery brands, and I’ve got a fun selection of pieces to share.

If you’ve been reading along all month, you’ll remember this next wrapper as part of my post on Nestle Canada’s special series of redesigned wrappers for this Halloween: 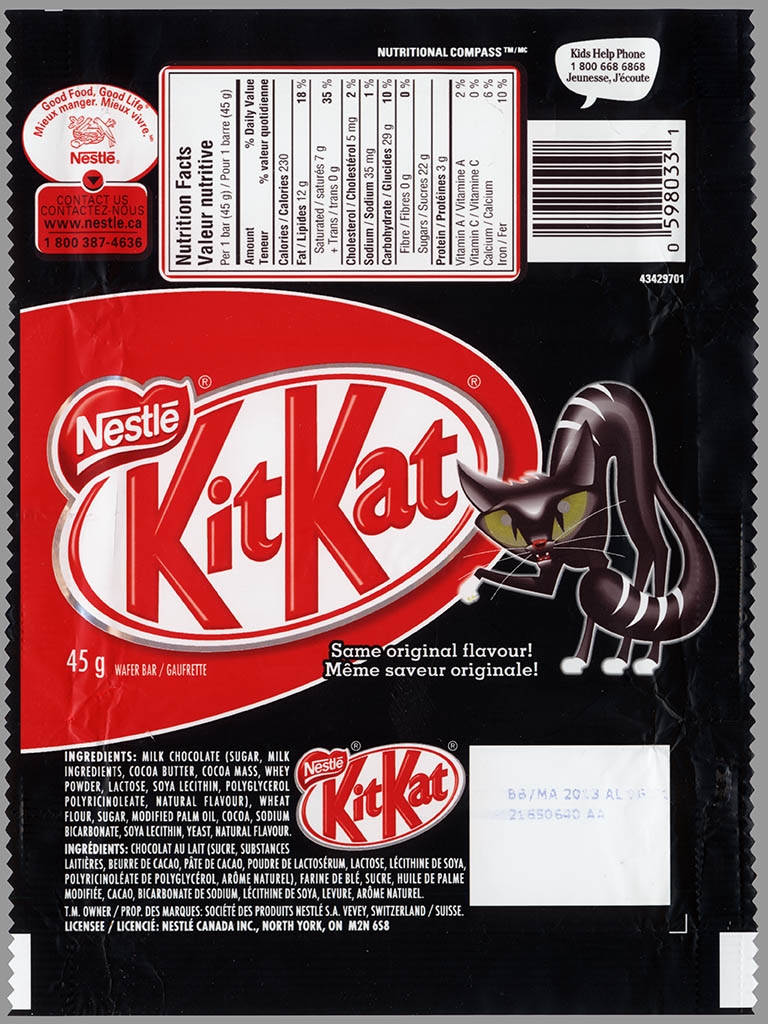 Back here in the United States, we saw a pretty fun release as well, with this wrapper and pack for orange-colored white chocolate Kit Kats in treat-sizes: 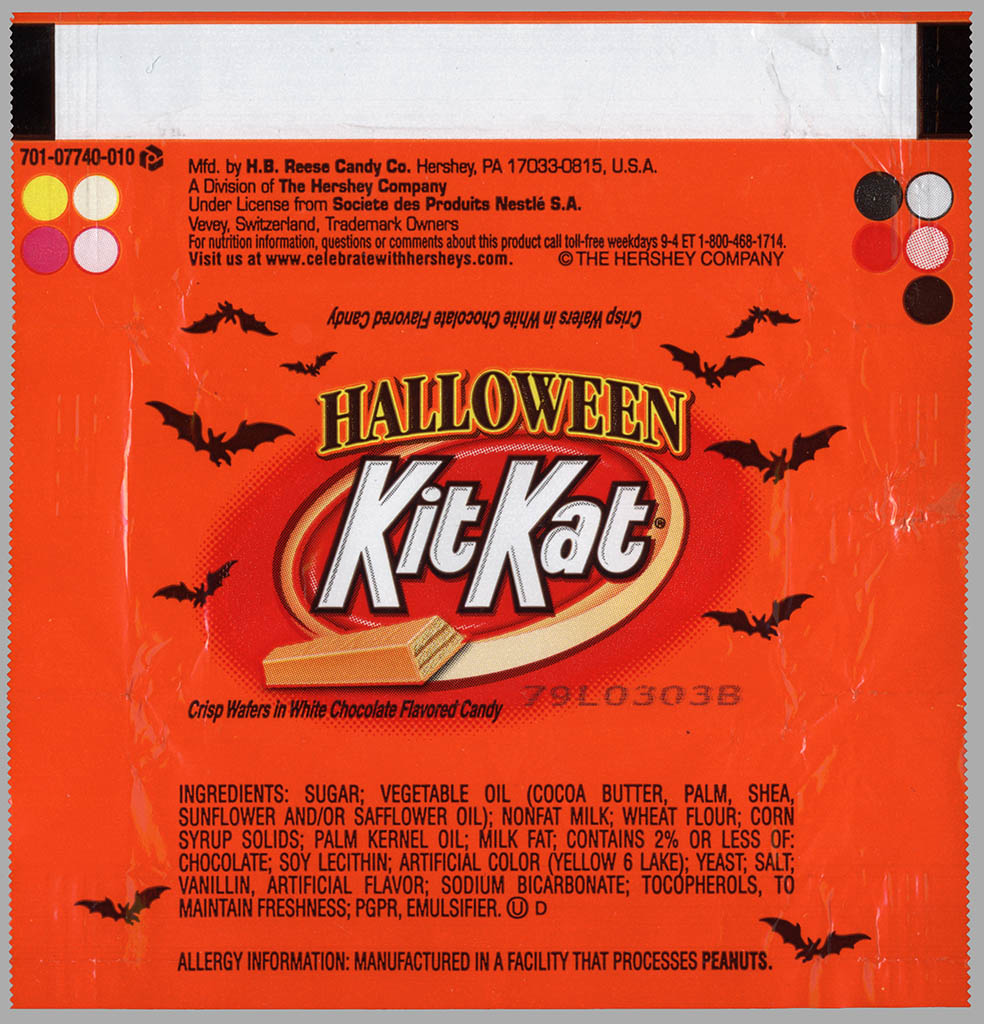 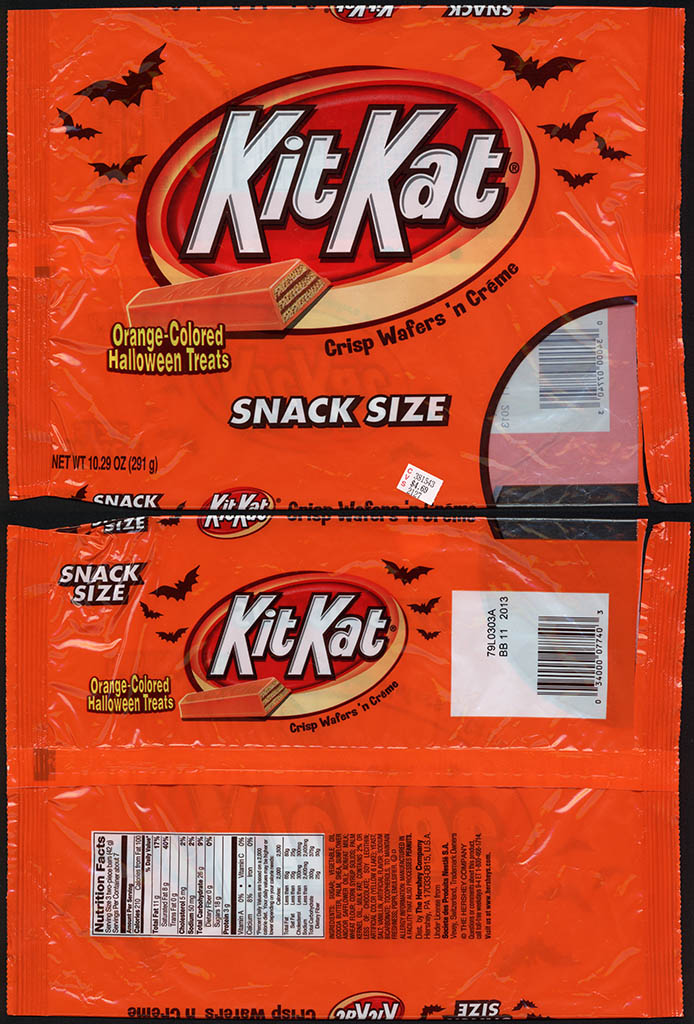 Last year, I picked up a different snack-size package with a cool set of bat wings on the Kit Kat logo: 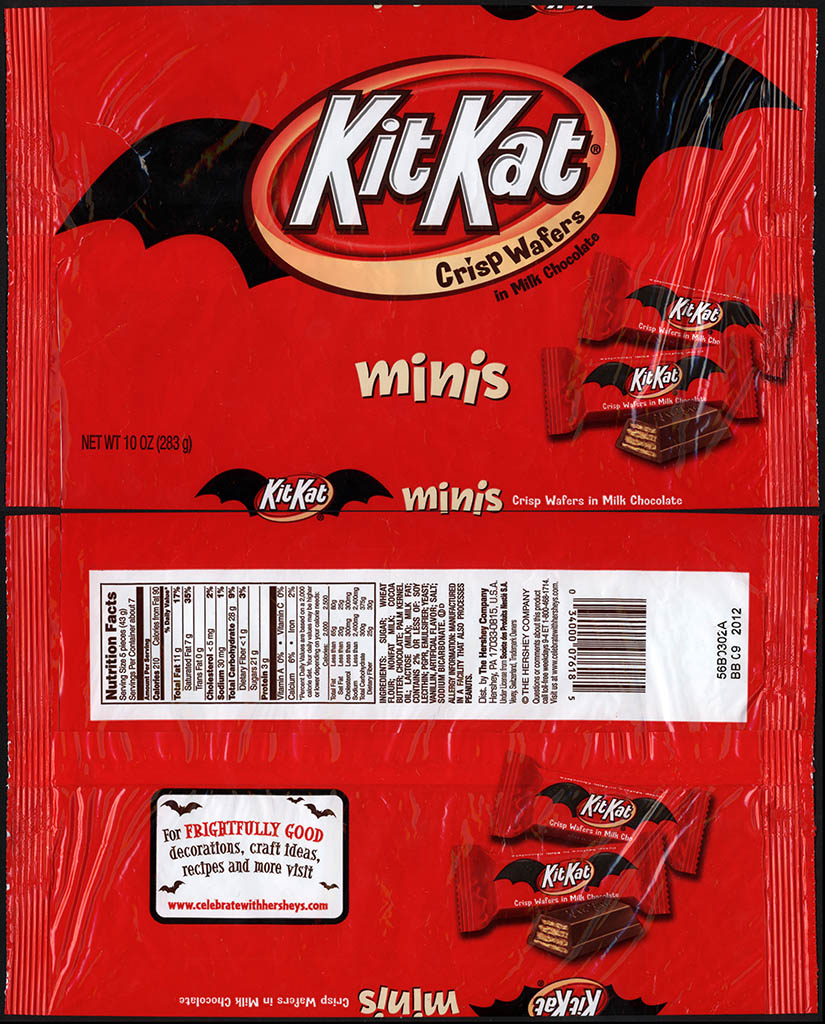 But it’s not just the mini size and snack-size that have received specialty packaging over the years.   Not too long ago, we had a great vampire wrapper on standard size and king-size Kit Kat packs: 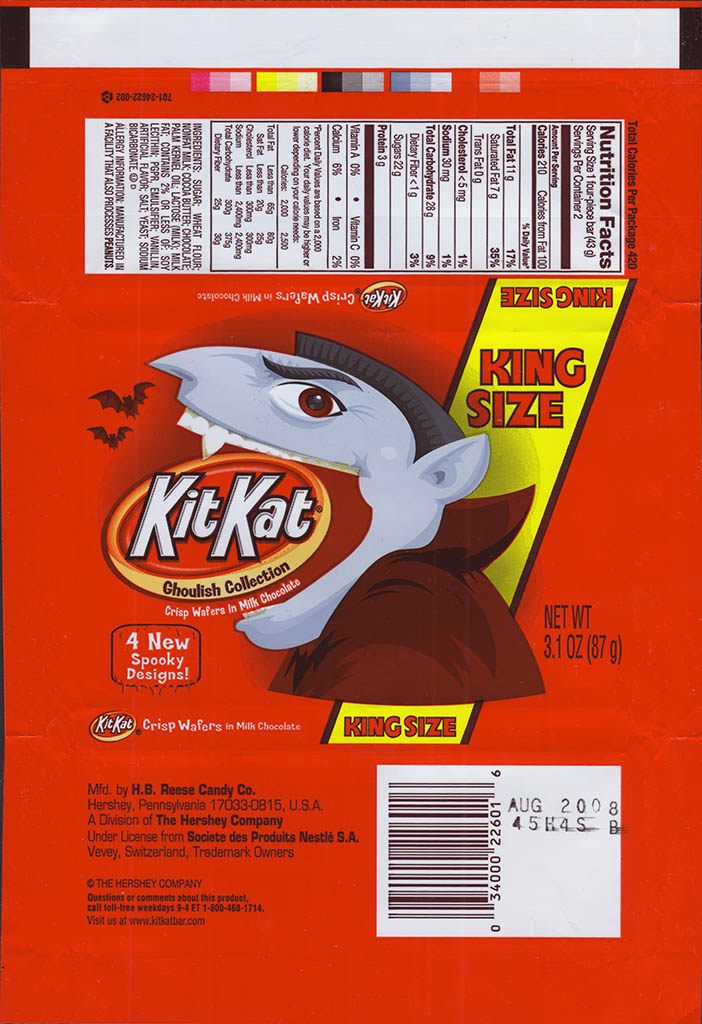 The Ghoulish collection became the Spooky collection back in 2010 or 2011 (can’t remember when I first saw these): 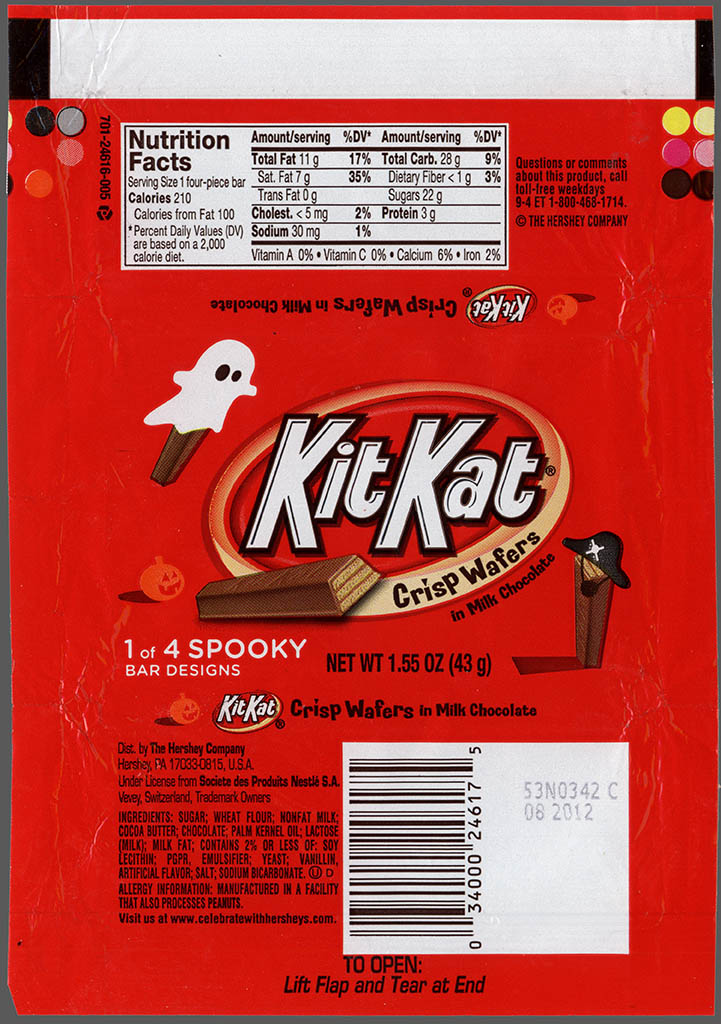 Those wrappers point out that you could get “1 of 4 spooky designs”.  At first I hunted for different wrappers, but it turned out that there was only one kind of wrapper – but there could be different designs on the chocolate bar itself.

So Kit Kat here in the USA has flexed its Halloween creativity a bit, but my favorites probably still come from outside the USA.  Over the years, Japanese Kit Kats have released some wonderfully-inventive flavors and Halloween designs.  Here are the packages for the ones I’ve managed to track down: 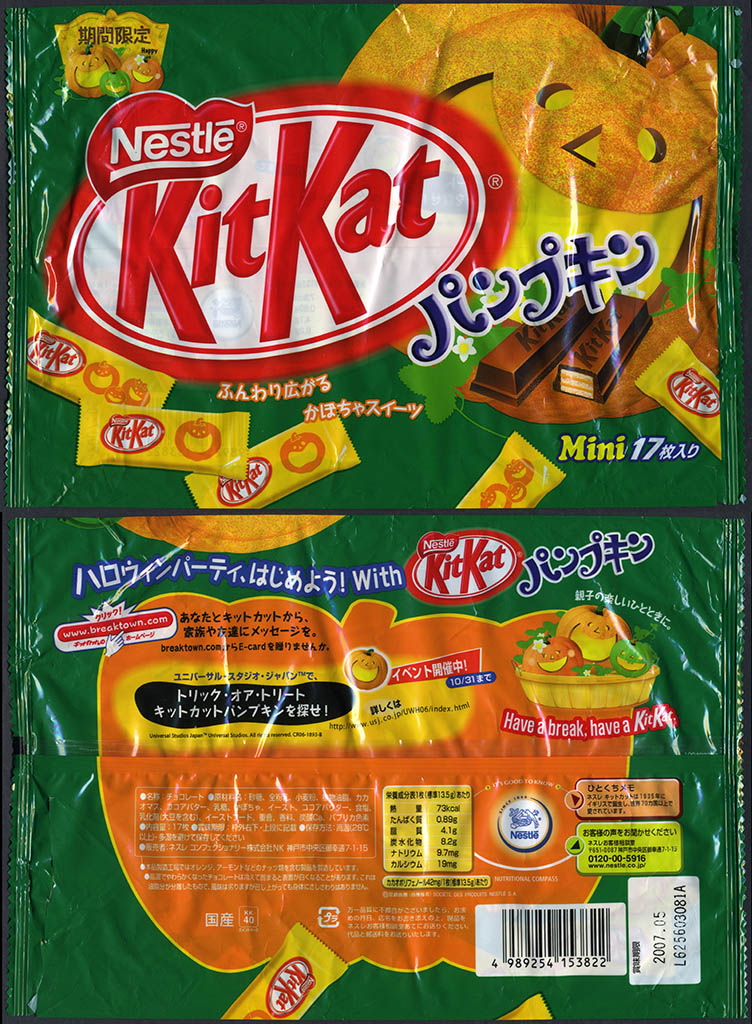 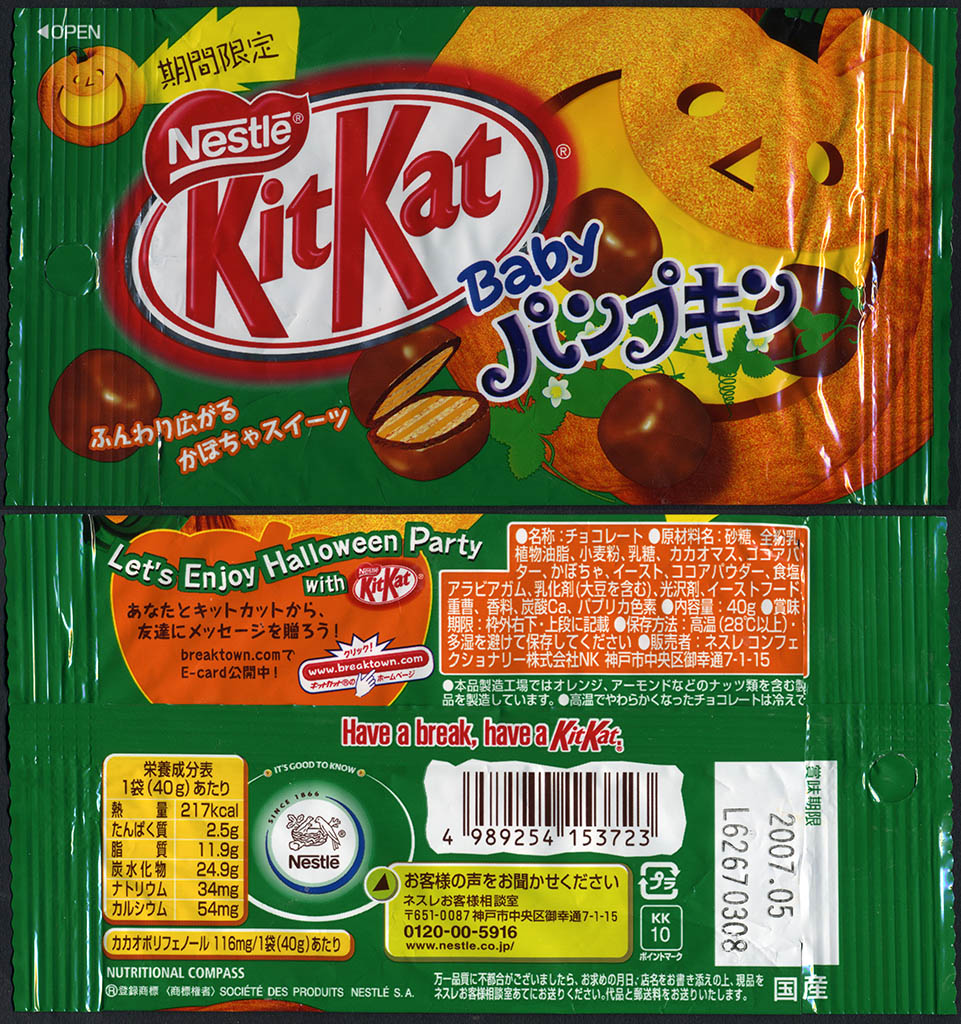 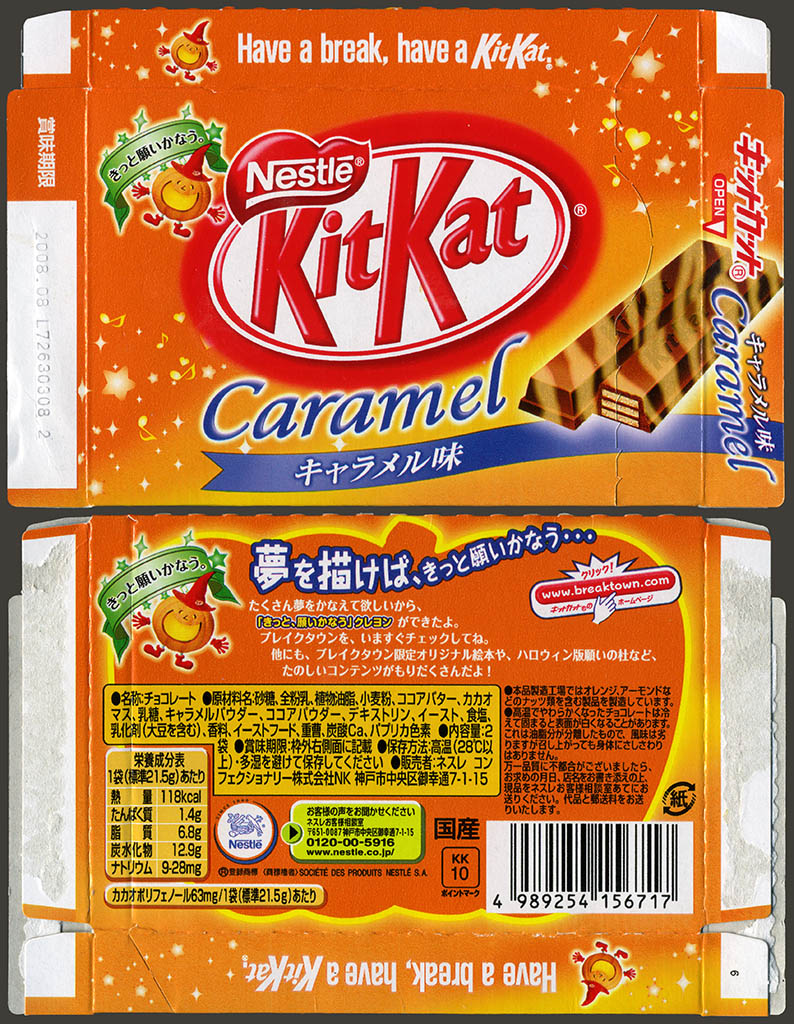 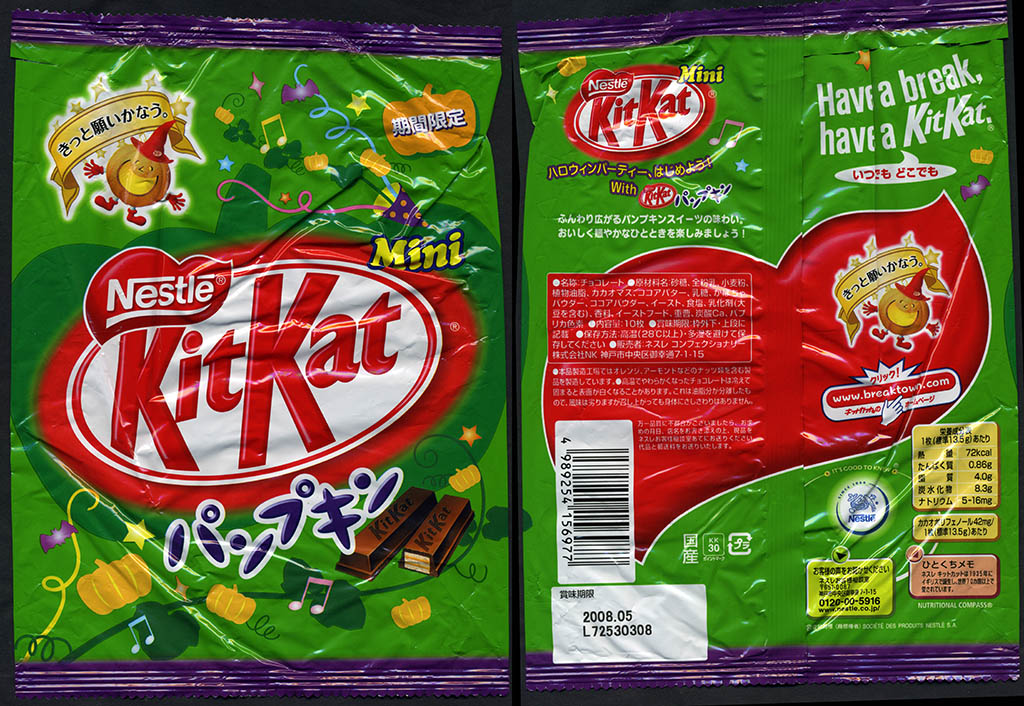 Finally, my last pieces to share are the 2012 Japanese Kit Kat Halloween release.  The flavor was a dark chocolate pumpkin pudding.  The packaging was pretty spectacular with a great-looking outer package and a fun series of at least six different individual mini-size wrappers (I think I’m missing a seventh – there’s an angel on the outer pack that I don’t have in the individual wrappers): 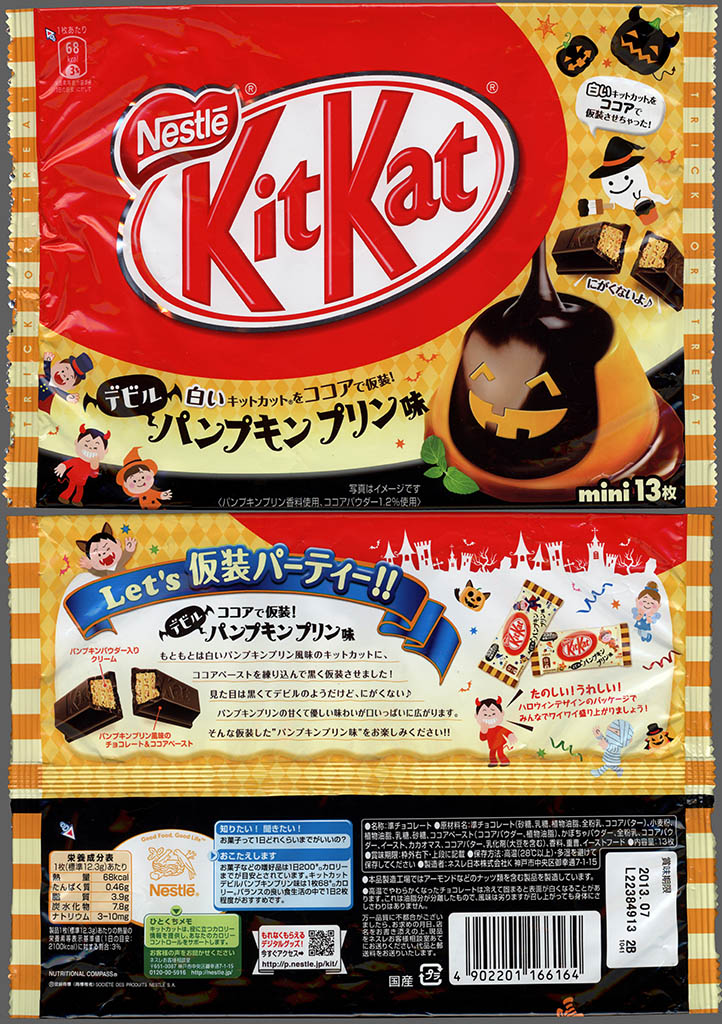 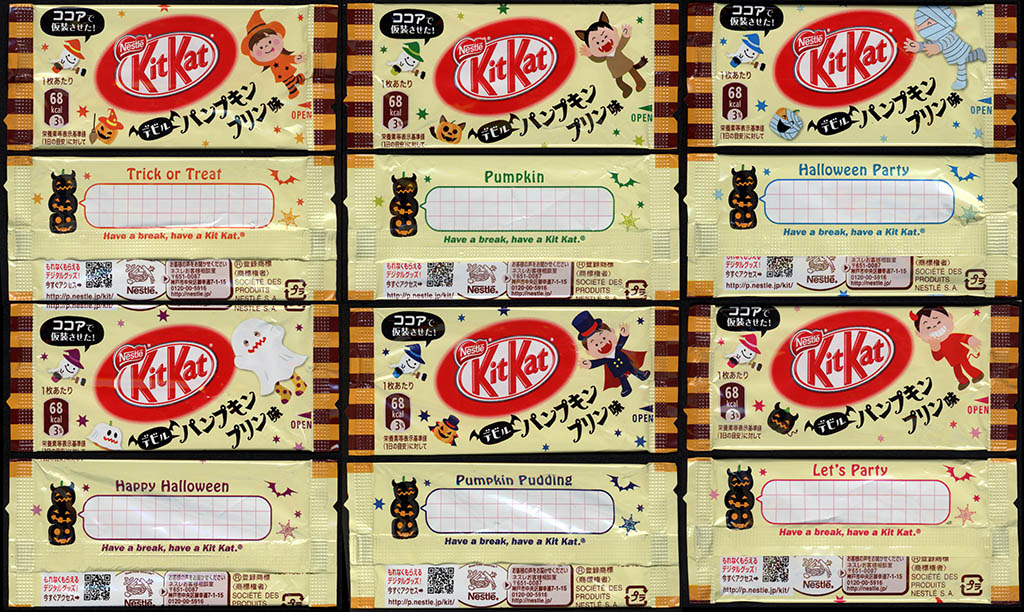 Aren’t those amazing?  I really dig the little costumed-kid illustrations on them.  Great stuff!

And that’s everything I’ve got for today’s post on Halloween Kit Kats.  I’ll be back tomorrow with my conclusion post to my CountdownToHalloween month, so make sure to drop back by.

A New York City based writer, editor and sometimes actor. After spending much of the 1990′s in the comic book business helping tell the stories of Marvel Comics’ X-Men as series editor, he has since split his time between developing his own entertainment properties while still consulting and working on others. Having been described as “the Indiana Jones of lost and forgotten candy”, Jason is one of the country’s premier candy collectors and historians with his discoveries appearing in countless blogs, magazines, newspaper articles, and books. Always happy to share his knowledge and unique perspectives on this colorful part of our popular culture, Jason has consulted with New York’s Museum of Food and Drink and has also been a featured guest on Food Network’s Heavyweights, France’s M6 Capital, and New York’s TheActionRoom.com. My Google Profile+
View all posts by Jason Liebig →
This entry was posted in Chocolate, CountdownToHalloween, Halloween, Hershey, Holiday, Nestle and tagged candy collecting, candy collection, candy collector, candy wrapper collection, candy wrapper collector, collectible, collecting candy, confectionery, confections, CountdownToHalloween, Halloween candy, Japan Kit Kat, Japanese Kit Kat, Japanese Kit Kats, Japanese KitKats, KitKat, packaging, sweets, vintage candy wrapper, wrapper. Bookmark the permalink.