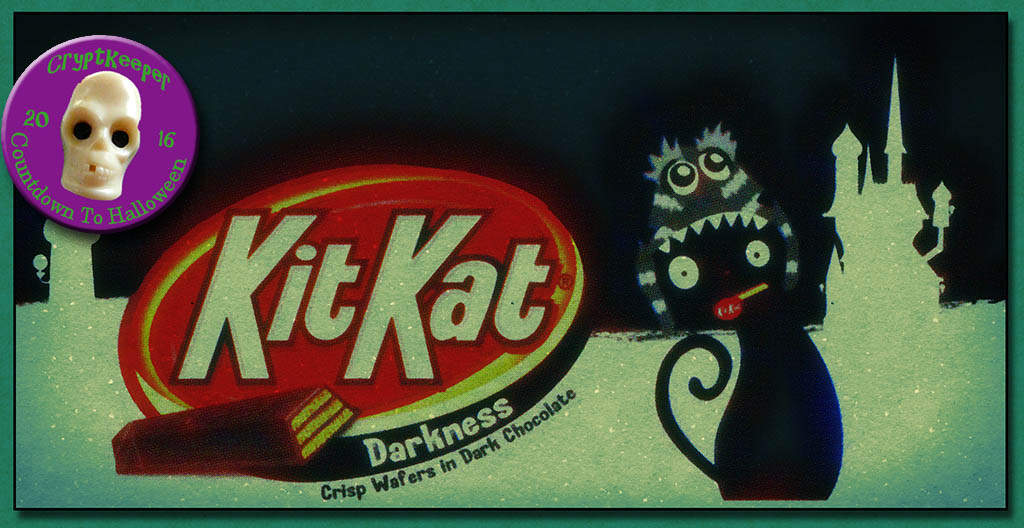 Around this time last year, Hershey started to upgrade their snack size packaging with a series of new seasonal mascots.  But it wasn’t until 2016 that the “Kit Kat Cat” arrived and for the Halloween season they’ve really outdone themselves with a number of packages featuring this fun new character.  Make the jump to check out Kit Kat’s awesome new Halloween Cat mascot packs!

Hershey’s has had a few standard Halloween snack-size offerings the last few years, one of them being their orange-colored white chocolate “Halloween Kit Kat”.  Orange Halloween Kit Kats return this year, but unlike previous seasons their outer packs feature the new Kit Kat Cat!  For this variety The Cat is dressed like a pirate, complete with peg leg and mouse-skull-and-bones eye patch.  Take a look – it’s outstanding: 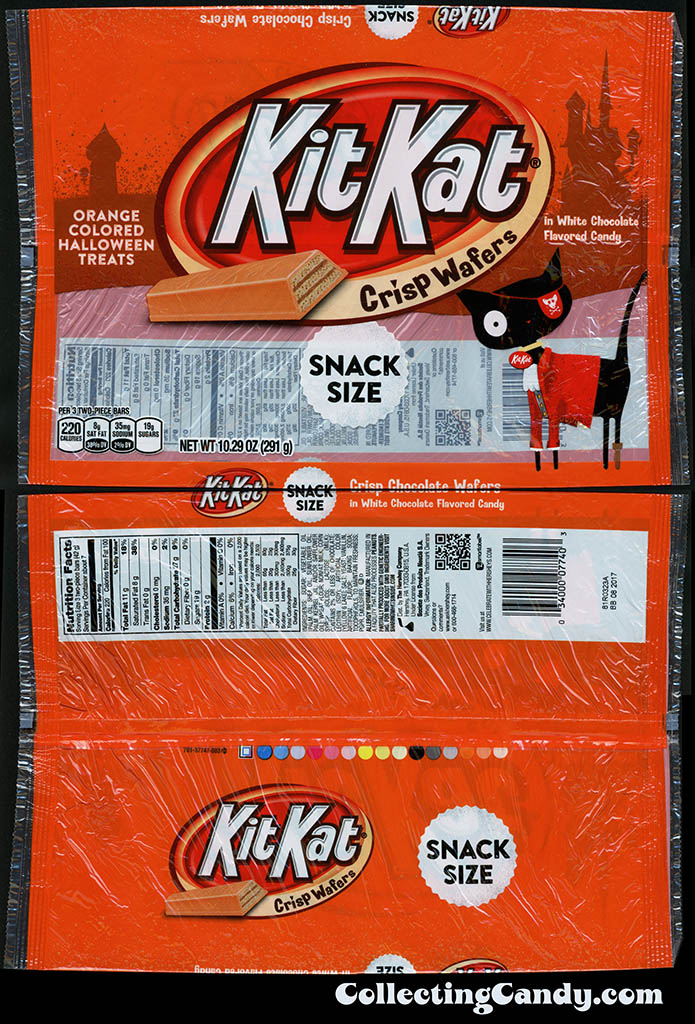 Here’s a comparison from the previous packaging to this year:

The interior wrappers remain the same as in previous years, which is too bad – I’d have liked to have seen that pirate Cat make it onto the individual wrappers.

Another returning favorite is Kit Kat Triple Chocolate, and it received its own variation on the Halloween Kit Kat Cat – this time The Cat sports a classic wizard costume and wand:

Here’s a look at the previous version on the new one:

Similar to the Orange Halloween, the interior snack size wrappers have not changed: 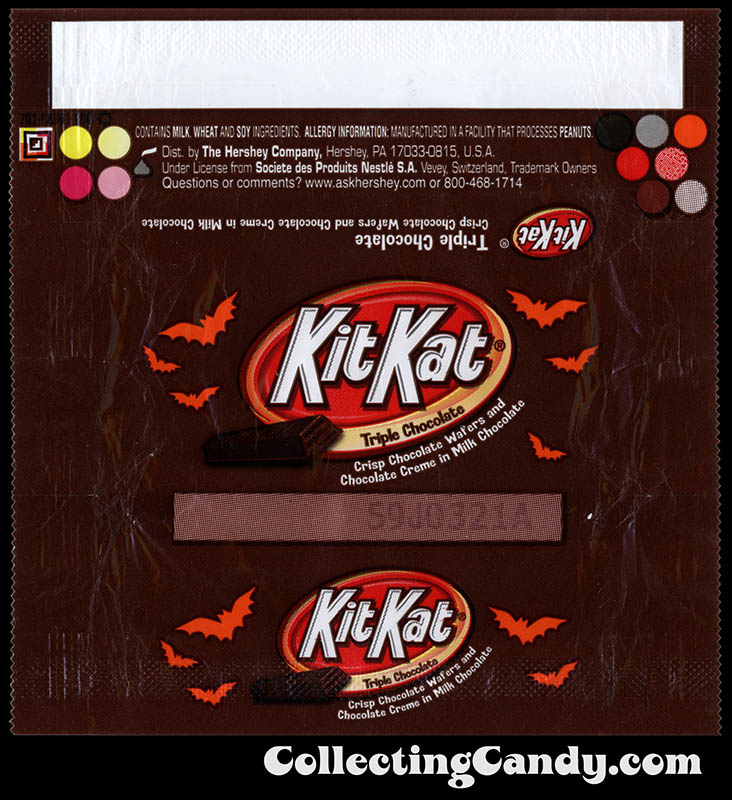 Halloween Kit Kat in white returned again this year but when I first saw them, they didn’t have The Cat mascot on the packages.  Instead, they were just like last years version:

I was disappointed with that until I realized that Kit Kat White did get a Cat pack after all – but only in the Jumbo or 20 ounce size.  Here, The Cat is dressed up as a mummy: 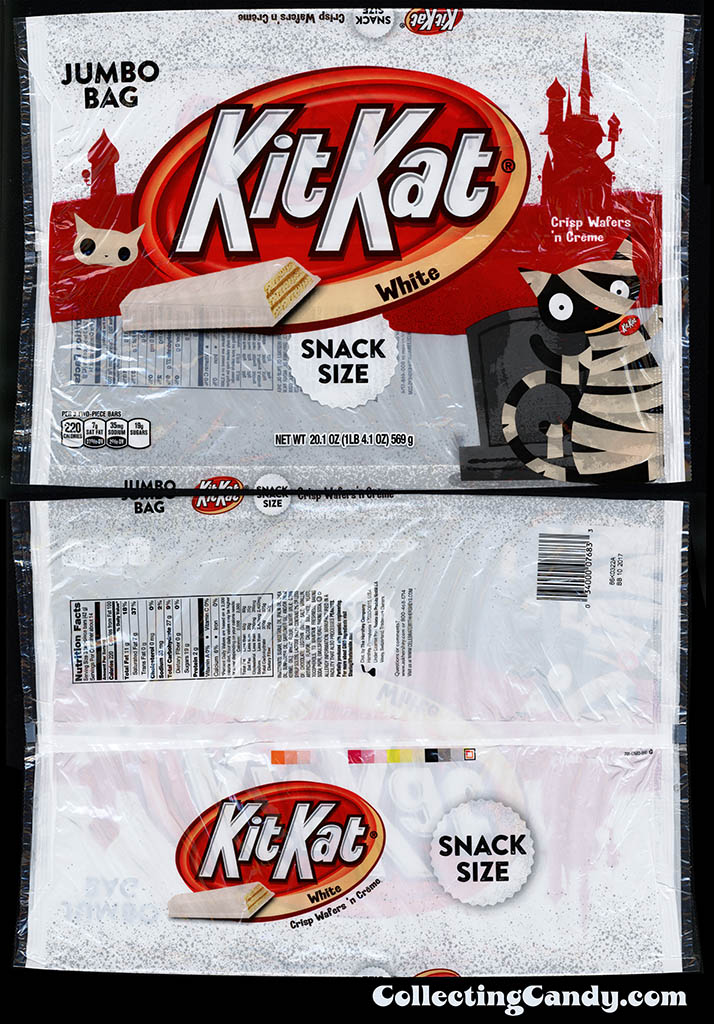 A Halloween multi-package for Kit Kat minis also arrived in stores for the 2016 season, and for that, we find The Cat hanging out behind a tombstone. 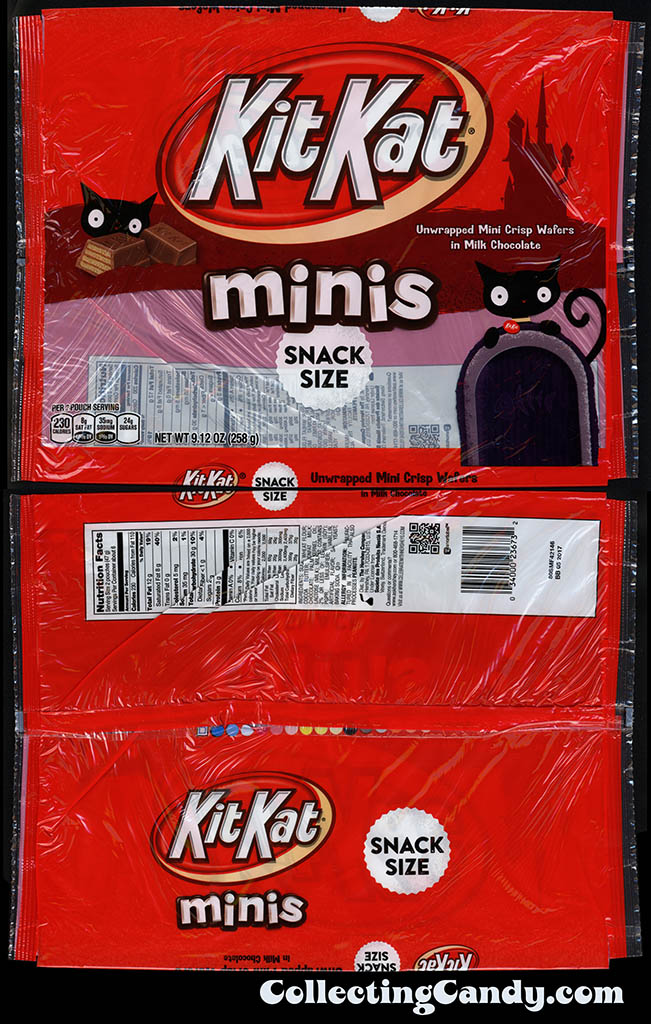 Finally, Target stores got an exclusive this year in the form of a dark chocolate Kit Kat snack size assortment.  And rather than just call them “Kit Kat Dark”, they gave them the far more spooky-sounding moniker of “Kit Kat Darkness”.  For this one, we find The Cat mascot in what I can only describe as a woolen monster hat of some sort.  Whatever it is, it’s awesome:

And in the only example found this year, the snack size Kit Kat Darkness individual wrappers themselves also get the new mascot treatment: 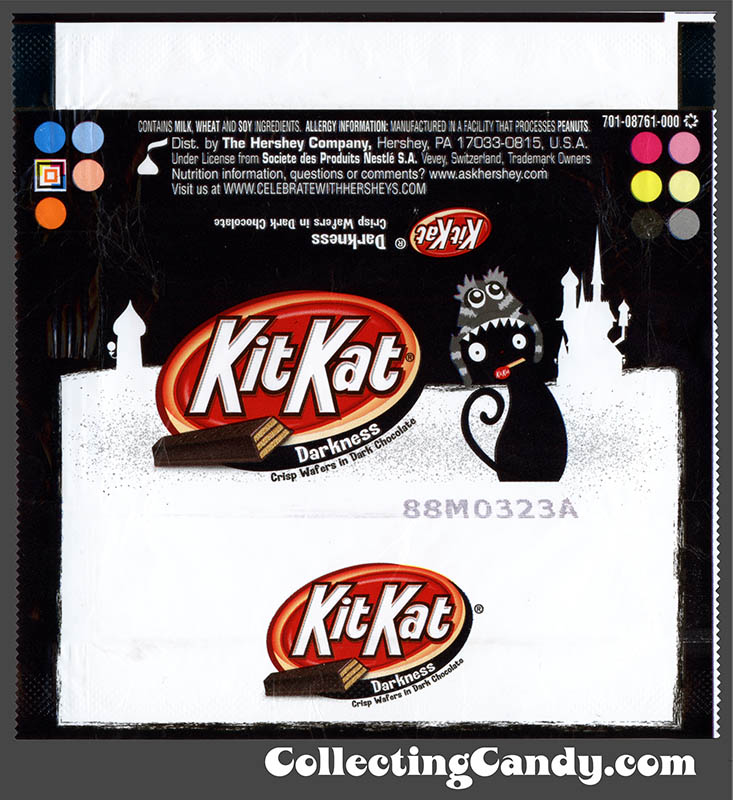 I’m kind of a big fan of that last one – I think it’s pretty awesome.

I should note that I also saw an awesome-and-enormous package of Hershey Halloween product that prominently featured The Cat mascot, and as much as I liked it, it was simply too big for me to buy.  Yes, even I have my limits. 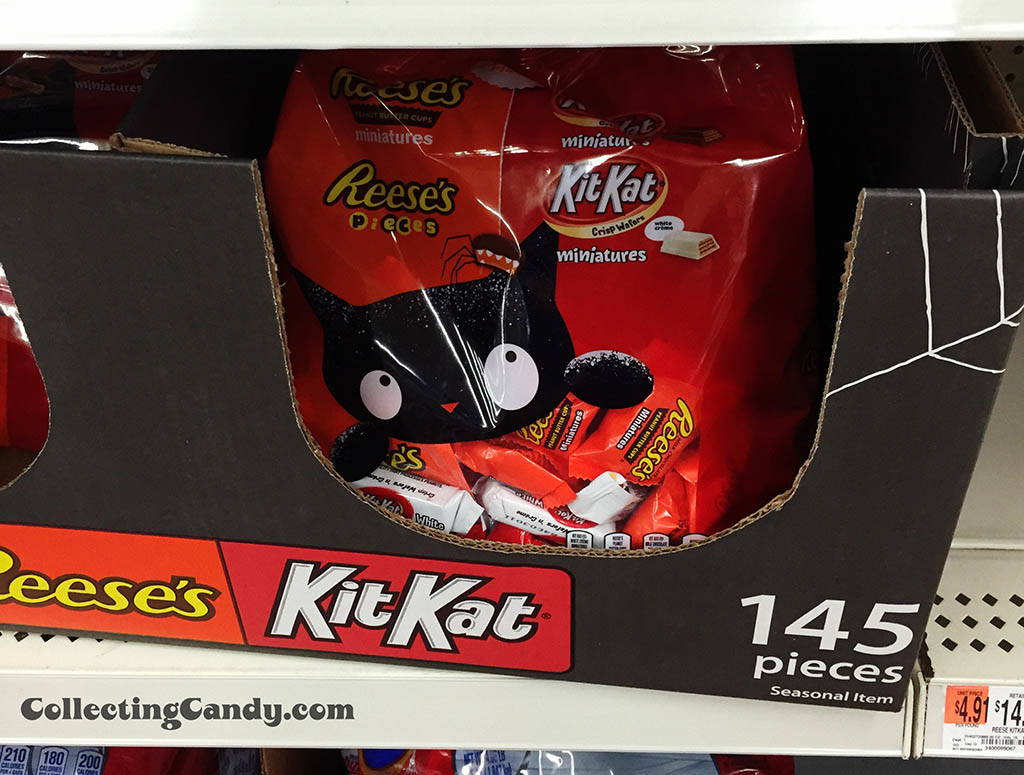 The Kit Kat Cat is also being found all over the non-Halloween, general Fall/Autumn branding as well: 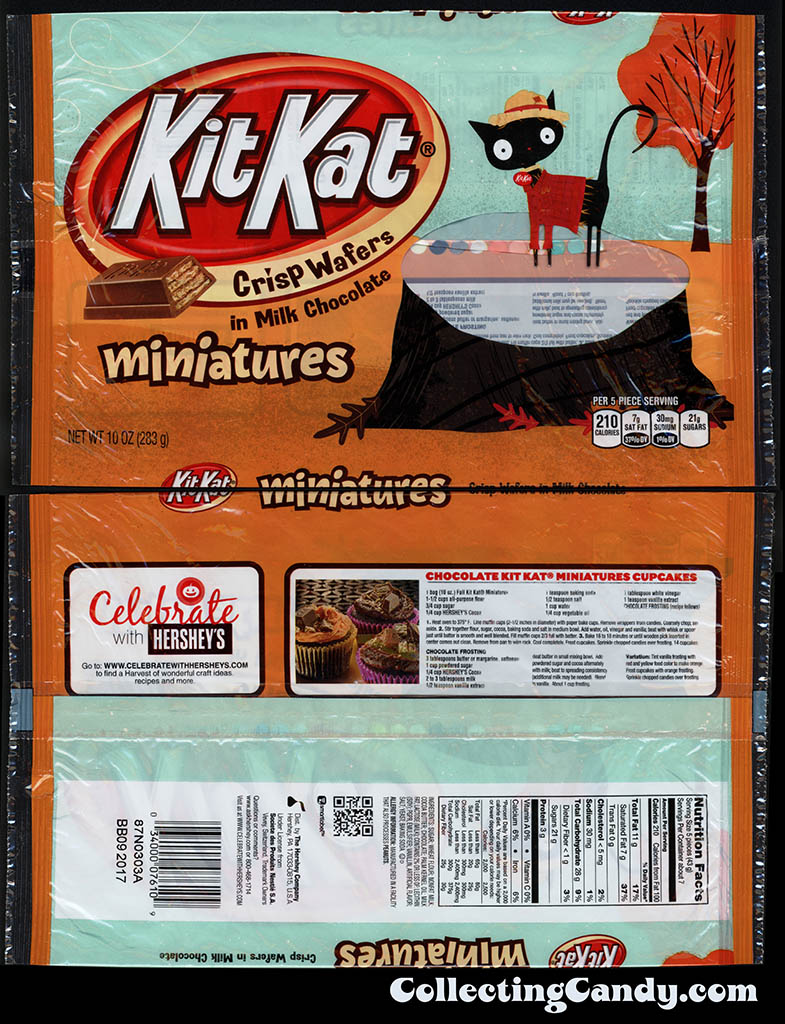 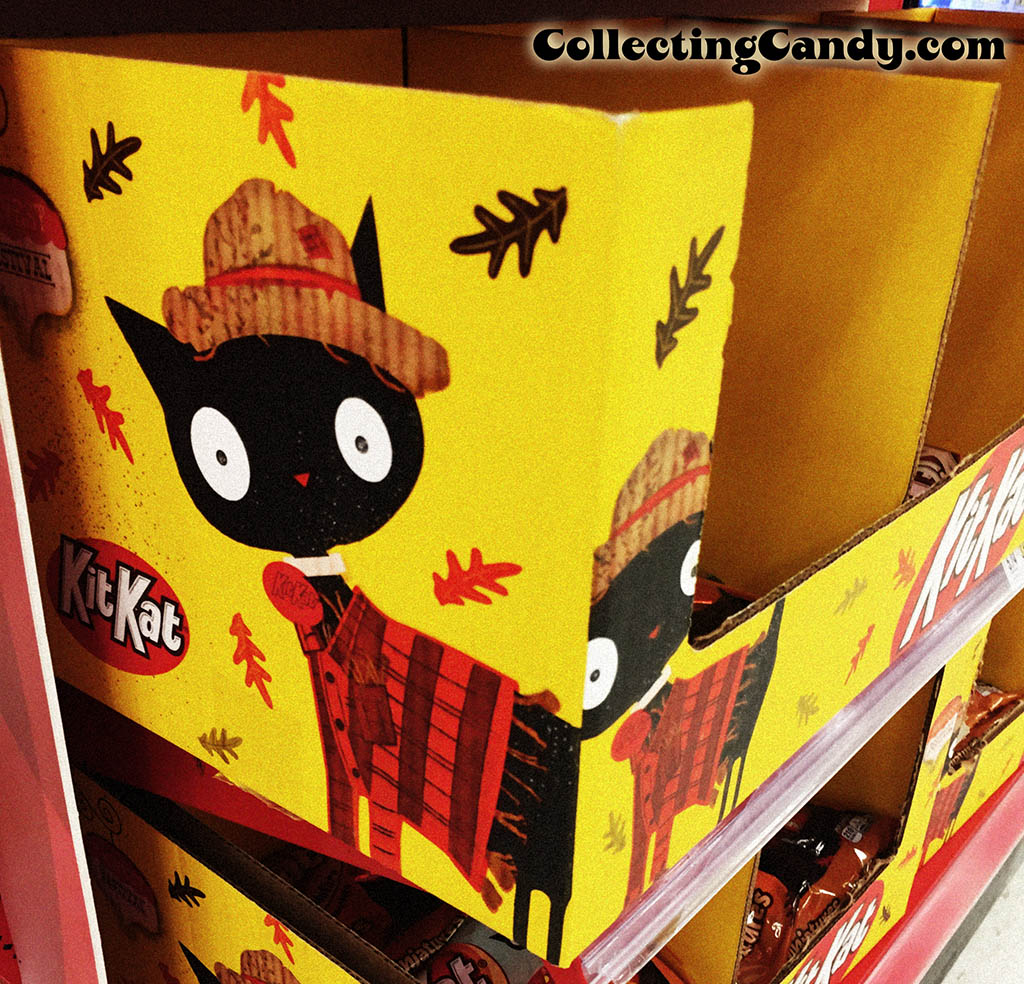 “The Cat” (I’m not sure of his real name, or if he/she has one yet) has been appearing on various marketing materials in 2016 for Hershey, Kit Kat and certainly Hershey’s Halloween — and they all come off pretty great.  I suspect this is a bit of character branding and marketing that will be around for at least a few years.  I think it’s an instant classic and I cannot wait to see what mischief the Kit Kat Cat gets into during the next holiday.

And that’s everything I’ve got on Kit Kat’s awesome Halloween mascot packaging.  See you next time!

A New York City based writer, editor and sometimes actor. After spending much of the 1990′s in the comic book business helping tell the stories of Marvel Comics’ X-Men as series editor, he has since split his time between developing his own entertainment properties while still consulting and working on others. Having been described as “the Indiana Jones of lost and forgotten candy”, Jason is one of the country’s premier candy collectors and historians with his discoveries appearing in countless blogs, magazines, newspaper articles, and books. Always happy to share his knowledge and unique perspectives on this colorful part of our popular culture, Jason has consulted with New York’s Museum of Food and Drink and has also been a featured guest on Food Network’s Heavyweights, France’s M6 Capital, and New York’s TheActionRoom.com. My Google Profile+
View all posts by Jason Liebig →
This entry was posted in Chocolate, CountdownToHalloween, Halloween, Hershey, Holiday and tagged candy collecting, candy collection, candy collector, candy wrapper collection, candy wrapper collector, cat, collectible, collecting candy, confectionery, confections, Halloween, Halloween candy, Hershey, Kit Kat, mascot, packaging, packaging design, sweets, vintage candy wrappers, wrapper. Bookmark the permalink.