Halloween DOTS – Back for Another Season! 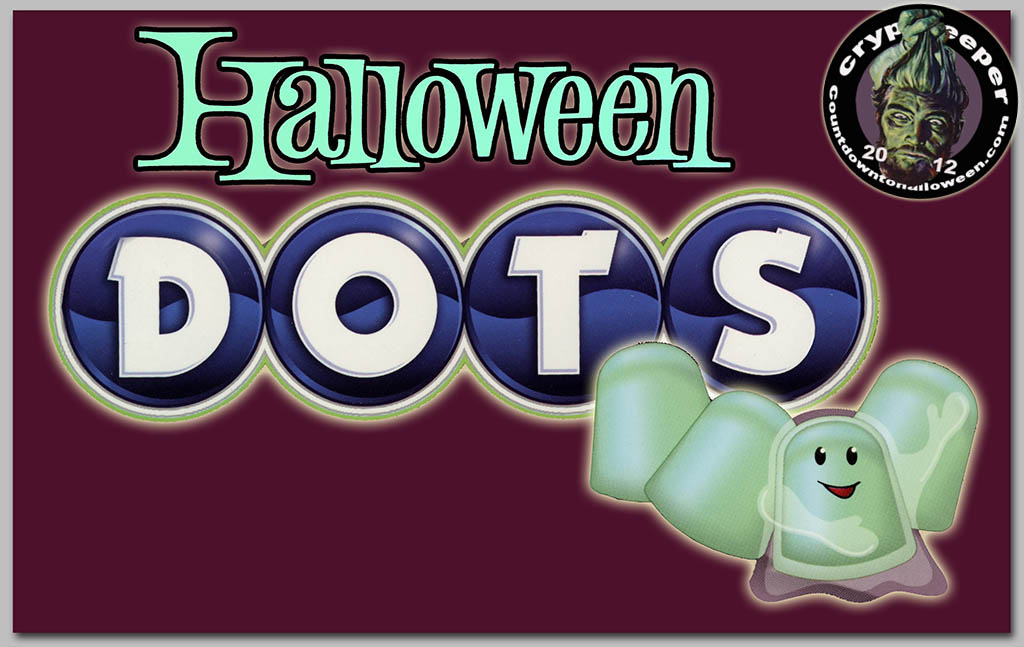 Just a few years ago, Tootsie started rolling out fun seasonal versions of their classic DOTS candies.  One of the coolest variety they’ve created are their Halloween DOTS, and they’re back again this season.   Today I’m going to take a look at them.

First up is the box for Ghost DOTS – these are the standard fruit-flavored DOTS but produced in a ghost-like semi-transparent color.  Here’s the box: 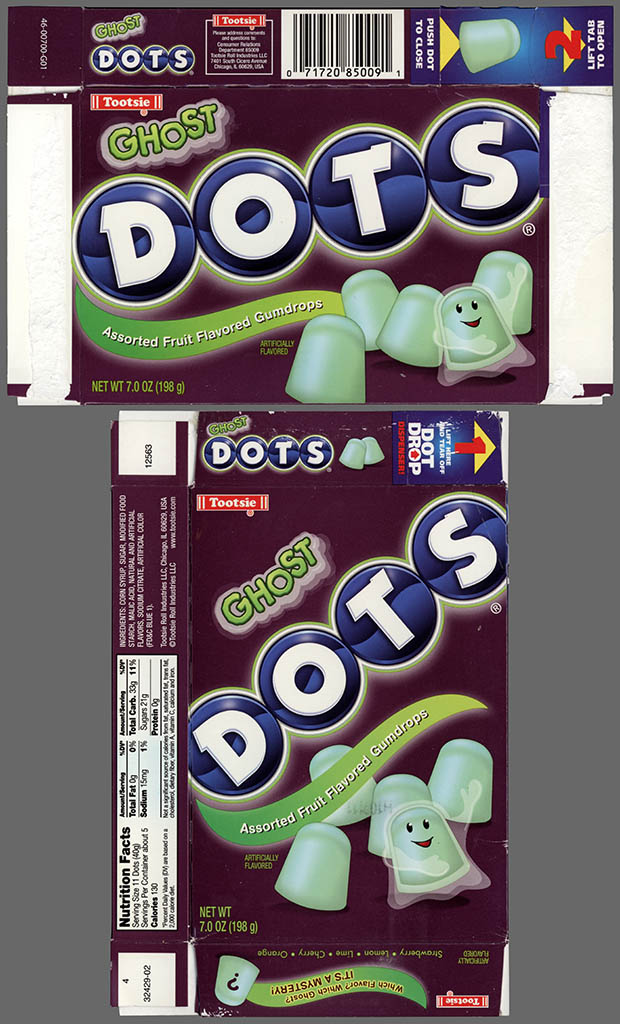 Next up, another spooky one – Bat DOTS in blood orange flavor: 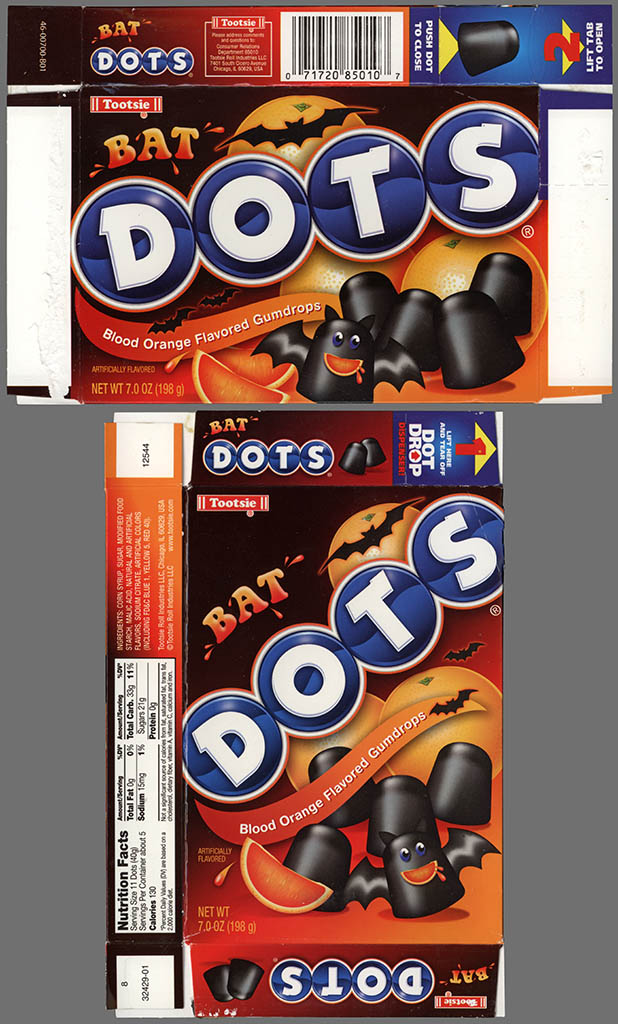 And finally, here’s the most light-hearted of the trio, Candy Corn DOTS: 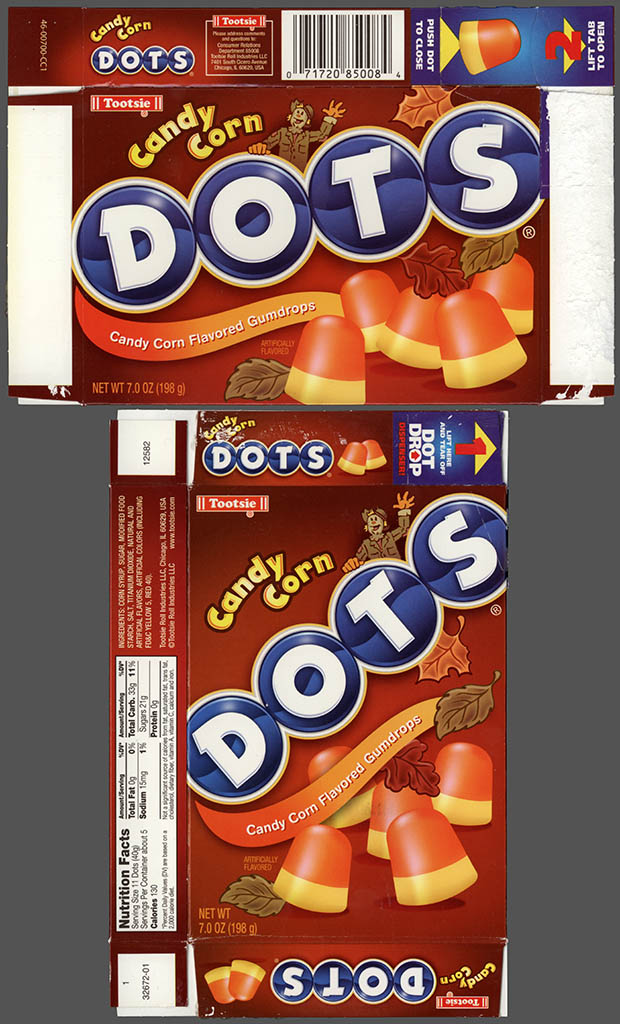 Holiday-themed offerings like these DOTS are fun for consumers and great for collectors, too.  These packages have been offered for three years now without changes, but eventually these styles of boxes will be retired.  For now, you can pick them up one more time, this Halloween season.   Next year, who knows?

And that’s everything for today’s coverage of Tootsie’s Halloween DOTS.  See you next time!

A New York City based writer, editor and sometimes actor. After spending much of the 1990′s in the comic book business helping tell the stories of Marvel Comics’ X-Men as series editor, he has since split his time between developing his own entertainment properties while still consulting and working on others. Having been described as “the Indiana Jones of lost and forgotten candy”, Jason is one of the country’s premier candy collectors and historians with his discoveries appearing in countless blogs, magazines, newspaper articles, and books. Always happy to share his knowledge and unique perspectives on this colorful part of our popular culture, Jason has consulted with New York’s Museum of Food and Drink and has also been a featured guest on Food Network’s Heavyweights, France’s M6 Capital, and New York’s TheActionRoom.com. My Google Profile+
View all posts by Jason Liebig →
This entry was posted in CountdownToHalloween, Halloween, Holiday, Uncategorized and tagged candy collecting, candy collection, candy collector, candy wrapper collection, candy wrapper collector, collectible, collecting candy, confectionery, confections, Halloween, Halloween candy, holiday candy, Mason Dots, packaging, seasonal candy, sweets, Tootsie, vintage candy wrapper, wrapper. Bookmark the permalink.

2 Responses to Halloween DOTS – Back for Another Season!