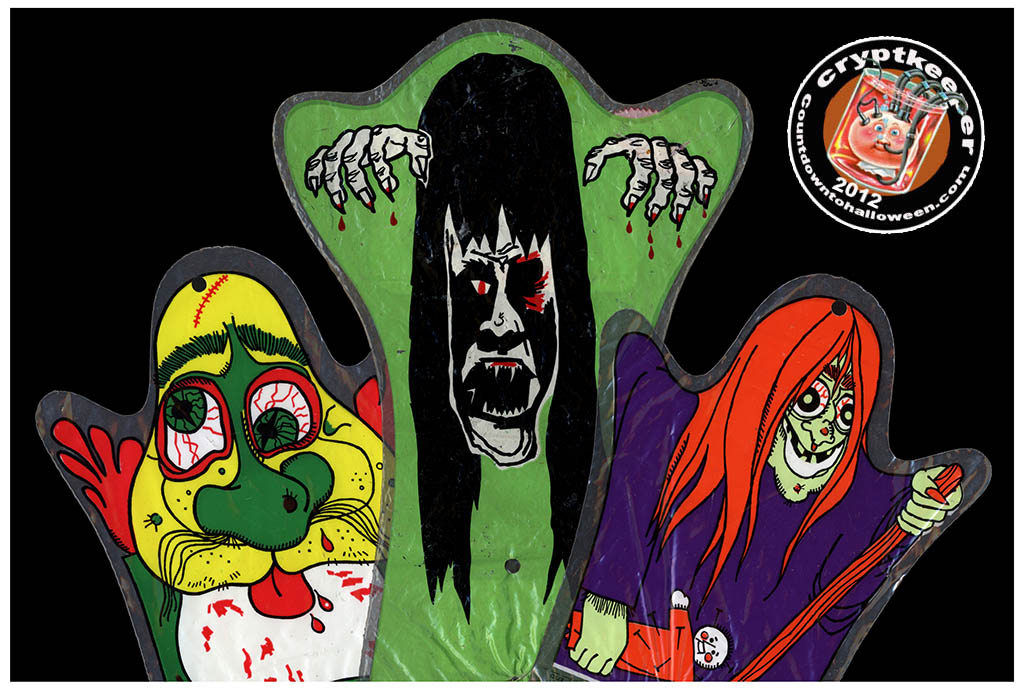 Just a few decades ago, a little plastic hand puppet was a popular marketing tool to capture the attention of kids.   Of course this tool made its way into confectionery marketing around Halloween, and I’ve got a trio of examples to share.

First up are a pair of puppet-packs for Clark stick gums.  These date back to the late 1960’s or early 1970’s, and came to me in remarkably good condition.  They look nearly brand new, and still have the original packs of gum included.  Here they are: 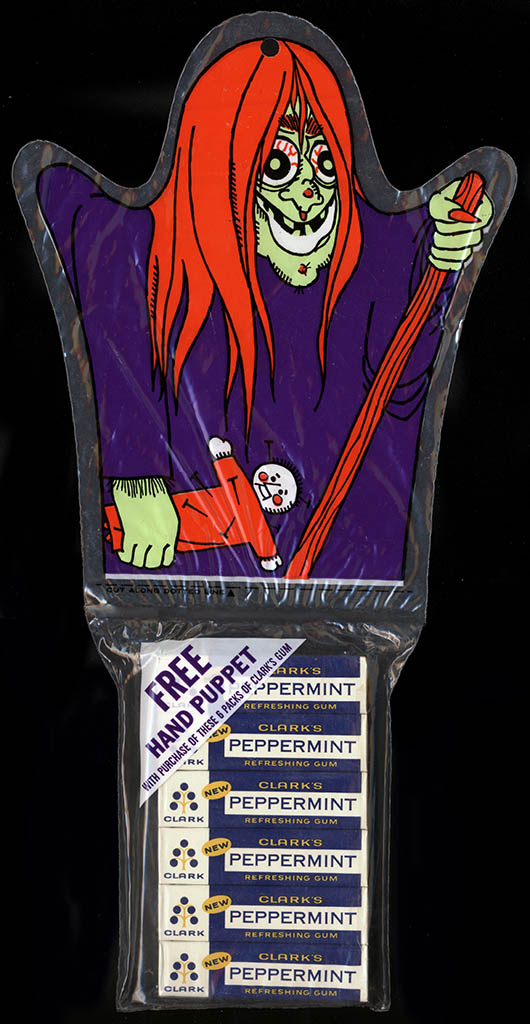 That first pack is clearly some kind of witch, but if you can figure out what this next frightful character is supposed to be, please let me know. 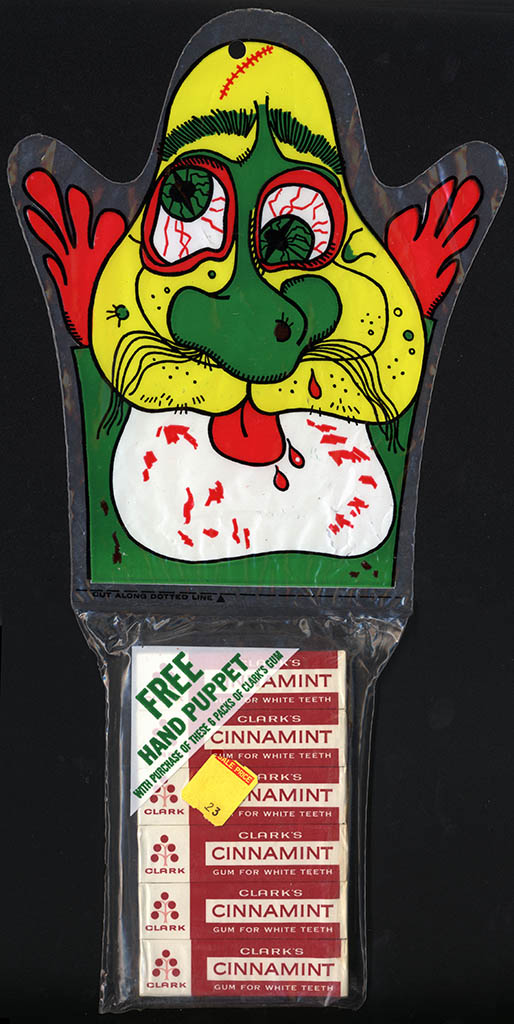 Next up is an awesome piece I’ve had in my collection for quite some time.  It’s for the Halloween version of Sugar Daddy nuggets, renamed “Monster Nuggets”.

To me, this one perfectly captures the style used on so many monster-related products from the 1960’s.  The illustration is creepy and rough, and just weird enough to elicit a real scare.  Unlike the Clark gum examples, which had the puppet attached to the package, this plastic package actually became the hand puppet when emptied: 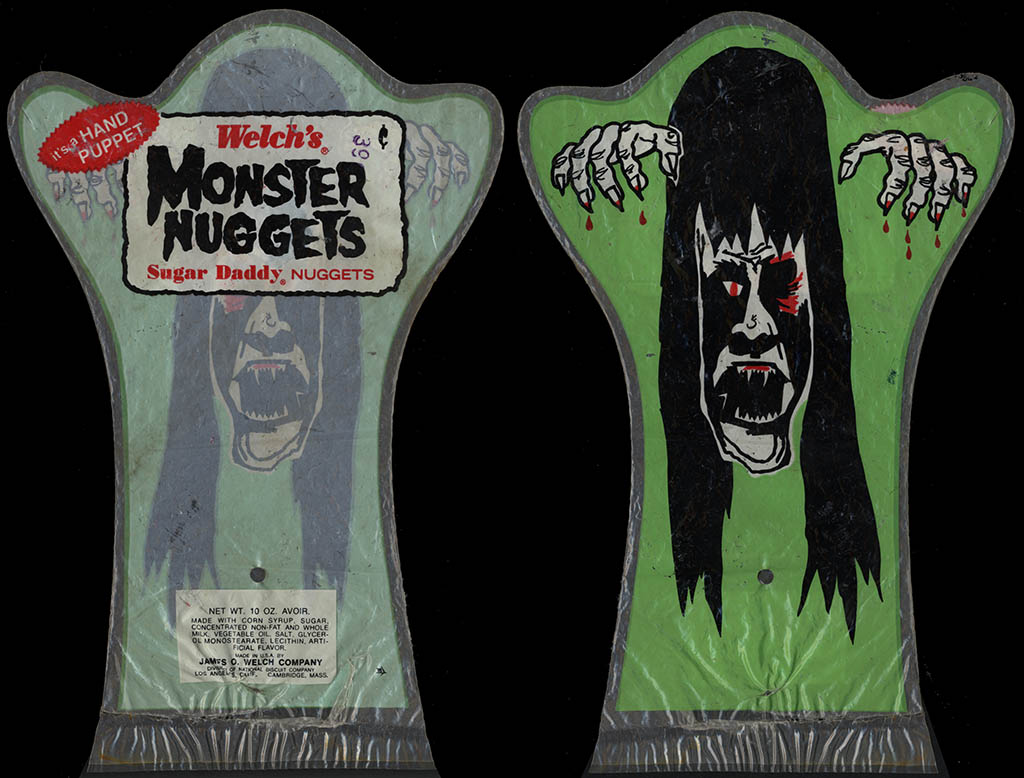 Ah… I smile every time I look at that Monster Nuggets package.

And that’s everything for today’s post on these crazy Halloween Hand-Puppet Packages.  See you next time!

A New York City based writer, editor and sometimes actor. After spending much of the 1990′s in the comic book business helping tell the stories of Marvel Comics’ X-Men as series editor, he has since split his time between developing his own entertainment properties while still consulting and working on others. Having been described as “the Indiana Jones of lost and forgotten candy”, Jason is one of the country’s premier candy collectors and historians with his discoveries appearing in countless blogs, magazines, newspaper articles, and books. Always happy to share his knowledge and unique perspectives on this colorful part of our popular culture, Jason has consulted with New York’s Museum of Food and Drink and has also been a featured guest on Food Network’s Heavyweights, France’s M6 Capital, and New York’s TheActionRoom.com. My Google Profile+
View all posts by Jason Liebig →
This entry was posted in 1960's, 1970's, CountdownToHalloween, Gum, Halloween and tagged 1960's candy, 1970's candy, candy collecting, candy collection, candy collector, candy wrapper collection, candy wrapper collector, collectible, collecting candy, confectionery, confections, Halloween candy, Halloween gum, packaging, sweets, vintage candy wrapper, wrapper. Bookmark the permalink.

2 Responses to Halloween Hand-Puppet Packs of the 60’s and 70’s!