Though the marketing for international brands like M&M’s has become more homogenous over the decades, there can still be fascinating differences, depending on the country.  Today, I’d like to showcase an aspect of an M&M’s campaign that was quite a bit of fun, and was done for the Australia-New Zealand markets:  The 2008 M&M’s Election posters!

While coming up for a title for today’s piece, I was considering going with, “And Green Gets Scandalous Again!”, due to the nature of her poster from this campaign.  I’ve discussed before how it seems the Australian market is more willing than their USA counterparts, to have a touch of risque fun with their mascots.  I first touched on this idea in my piece on Australia’s M&M’s Bare All promotion, and later on the topic of the recent Aussie version of the M&M’s Coconut Packaging.   It just seems that the Australians have more of a willingness to let the candy speak to an adult sense of humor.  They certainly aren’t afraid of a little double entendre.

Here’s the poster for Miss Green – what do you think?: 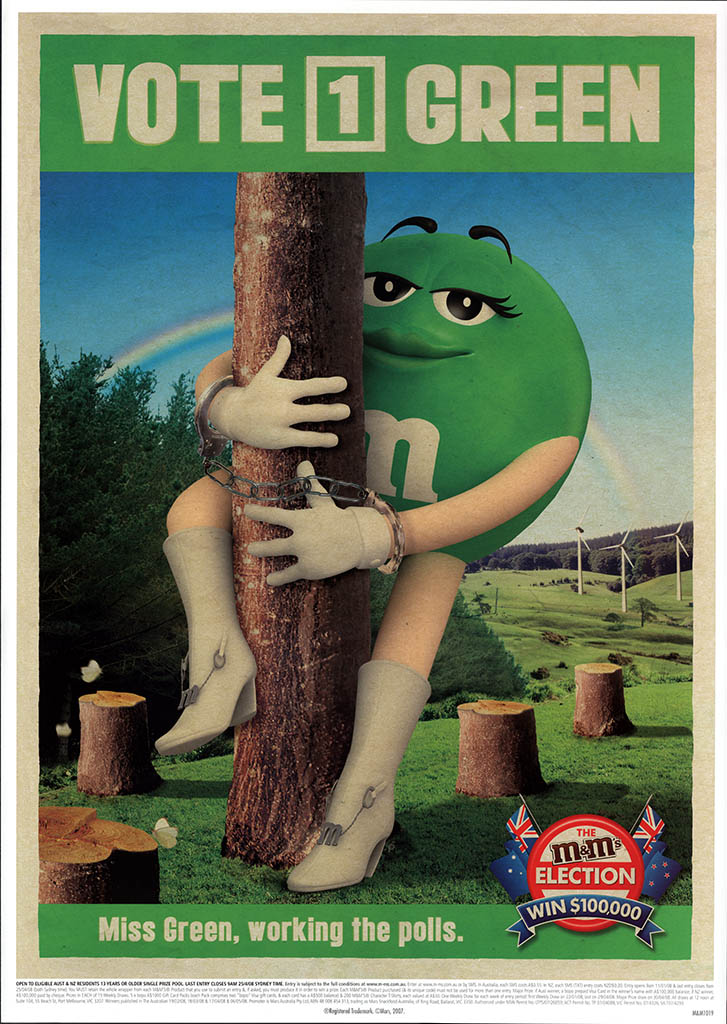 My favorite poster from the set of six that was released is the one for Red, which smartly invokes a cold-war era Soviet style propaganda look.  It’s an awfully cool poster for a candy promotion, complete with aged and worn paper effects: 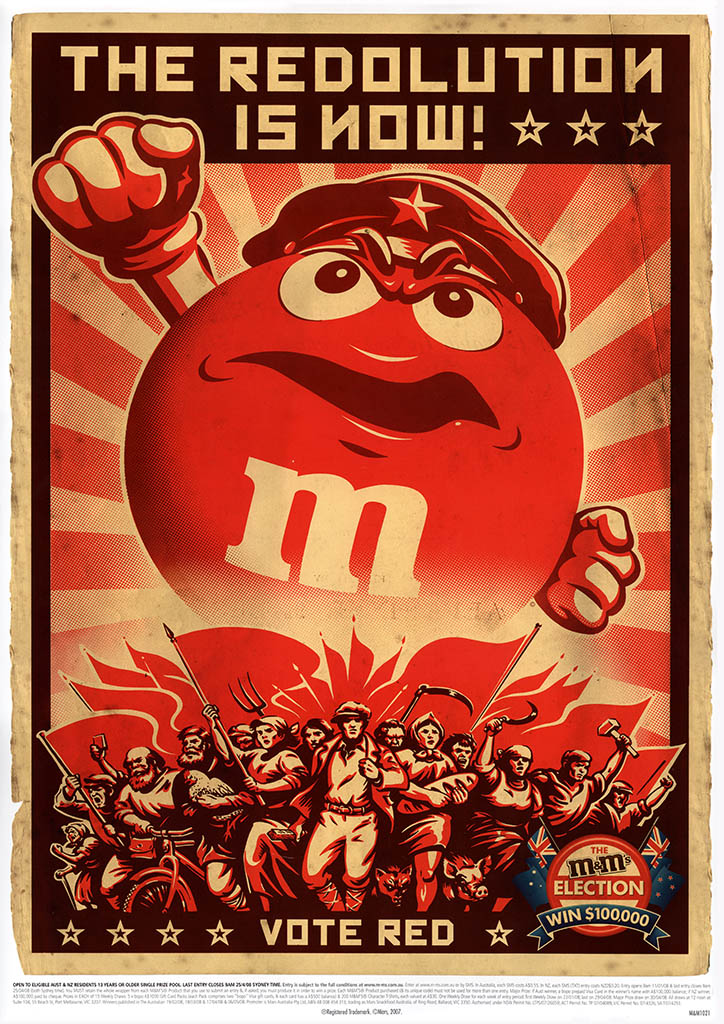 The other posters in the line-up are a bit more of what you’d expect, but they’re still pretty neat.  Here they are: 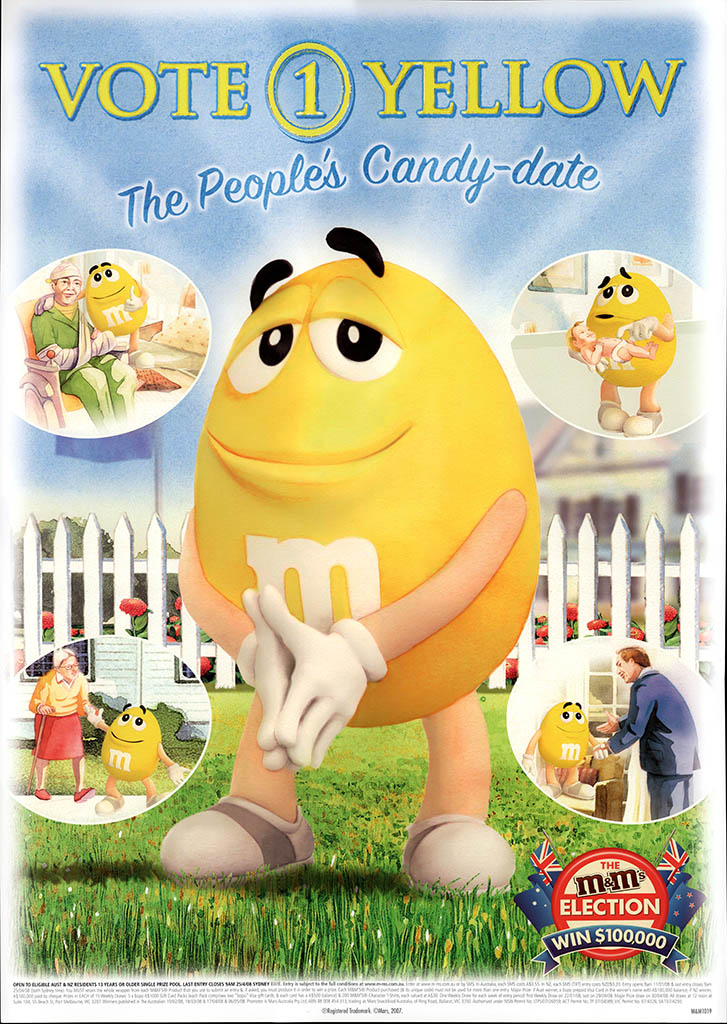 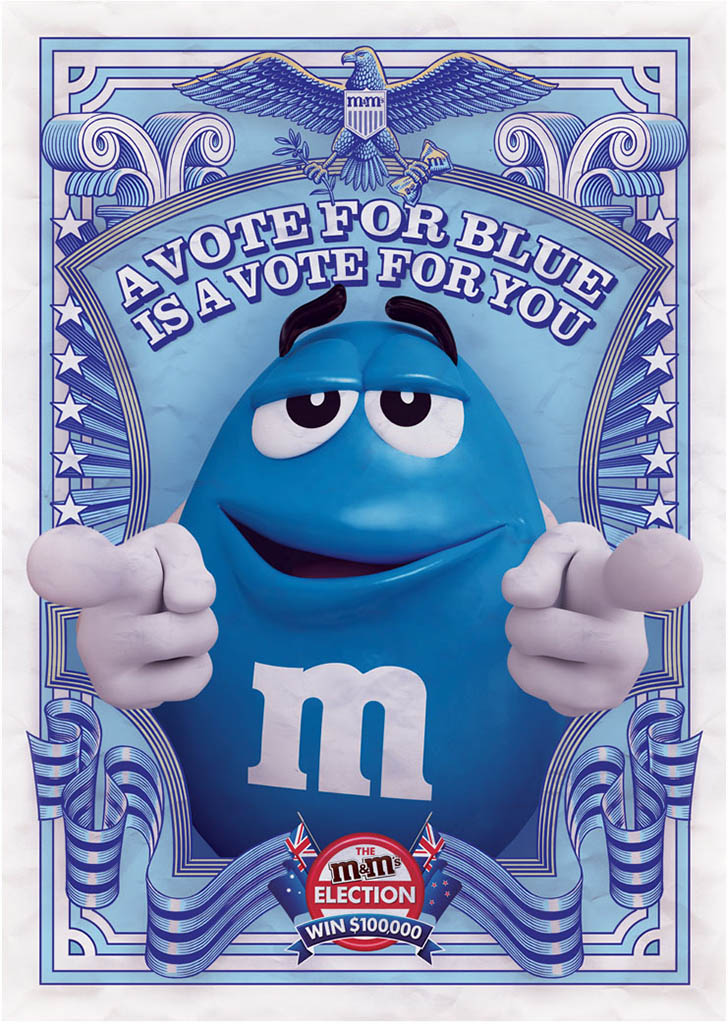 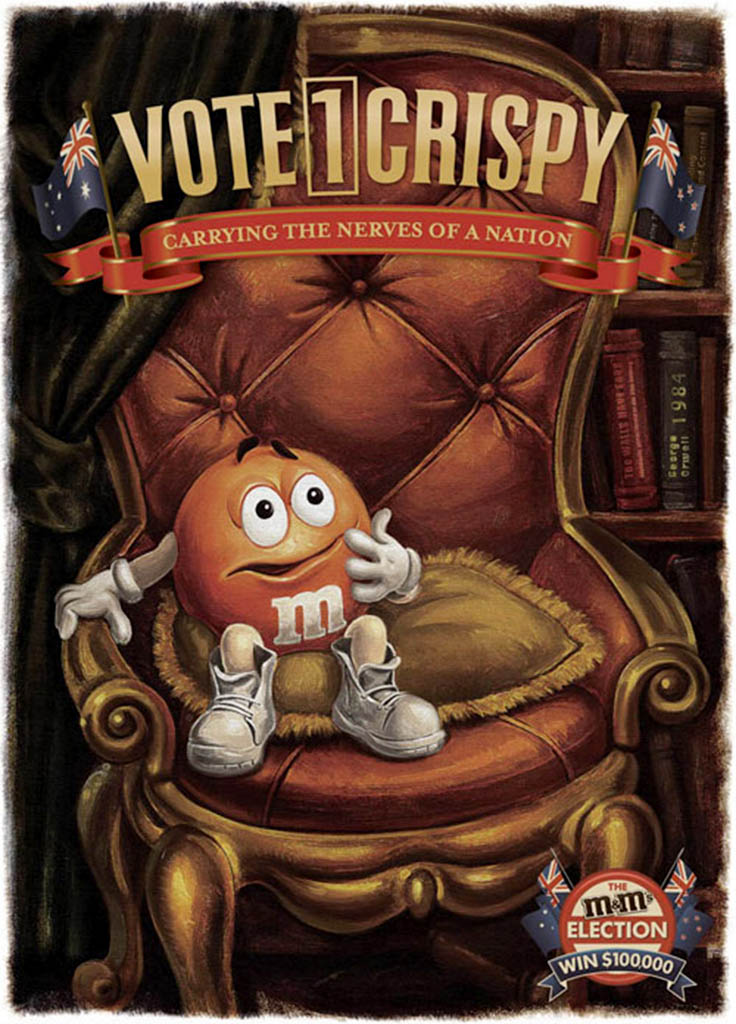 And finally, here’s the main promotional poster image, which describes the details of the promotion, and features all of the mascots involved: 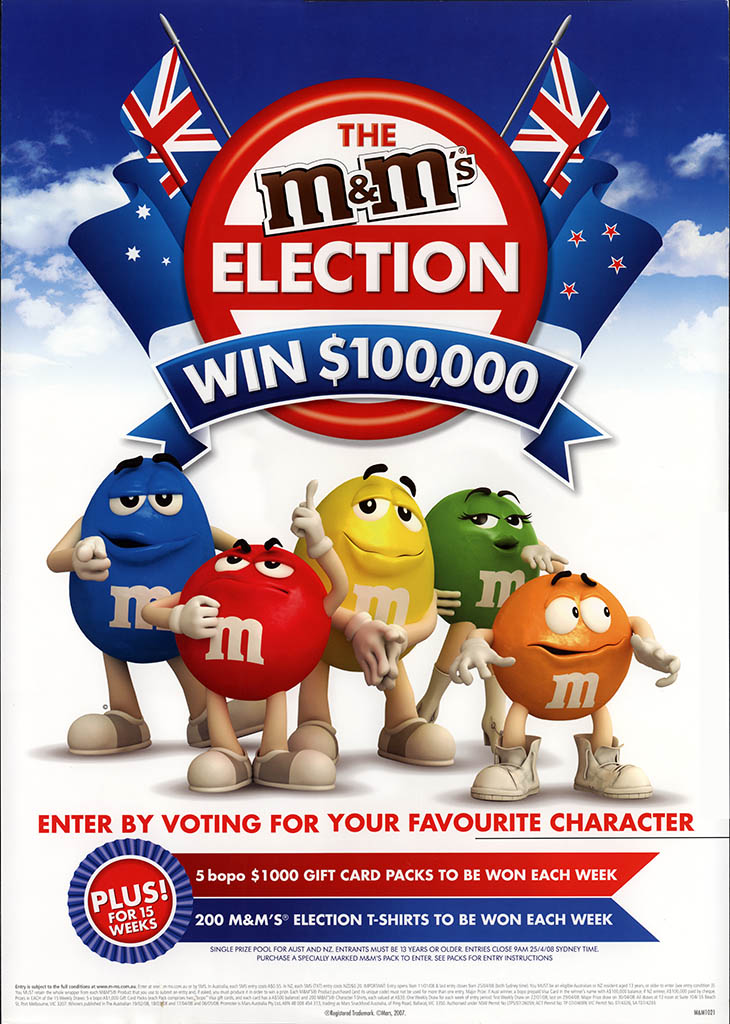 I believe these posters were only meant for in-store promotion, and were not mail-aways or giveaways.  Each poster is double-sided, with a different design on the front from the back – so there were actually only three posters in the set, each sporting a different pair of these designs on either side.  Though, you’d need two sets of three to be able to display them all at the same time.

I really dig the graphic look they went for with these posters – and it’s an approach I’m seeing more and more.  I look at the Redolution poster and I’m reminded of the stylized movie poster prints that have been coming out of the Alamo Draft House in recent years, the beautiful “Mondo” poster prints.

M&M’s would have a similar campaign here in the USA two years later, with the M&M’s VOTE promotion.  We didn’t get Miss Green “working the polls” but we did get to vote on our favorite M&M mascot.  Here’s a promotional sticker I picked up for that one: 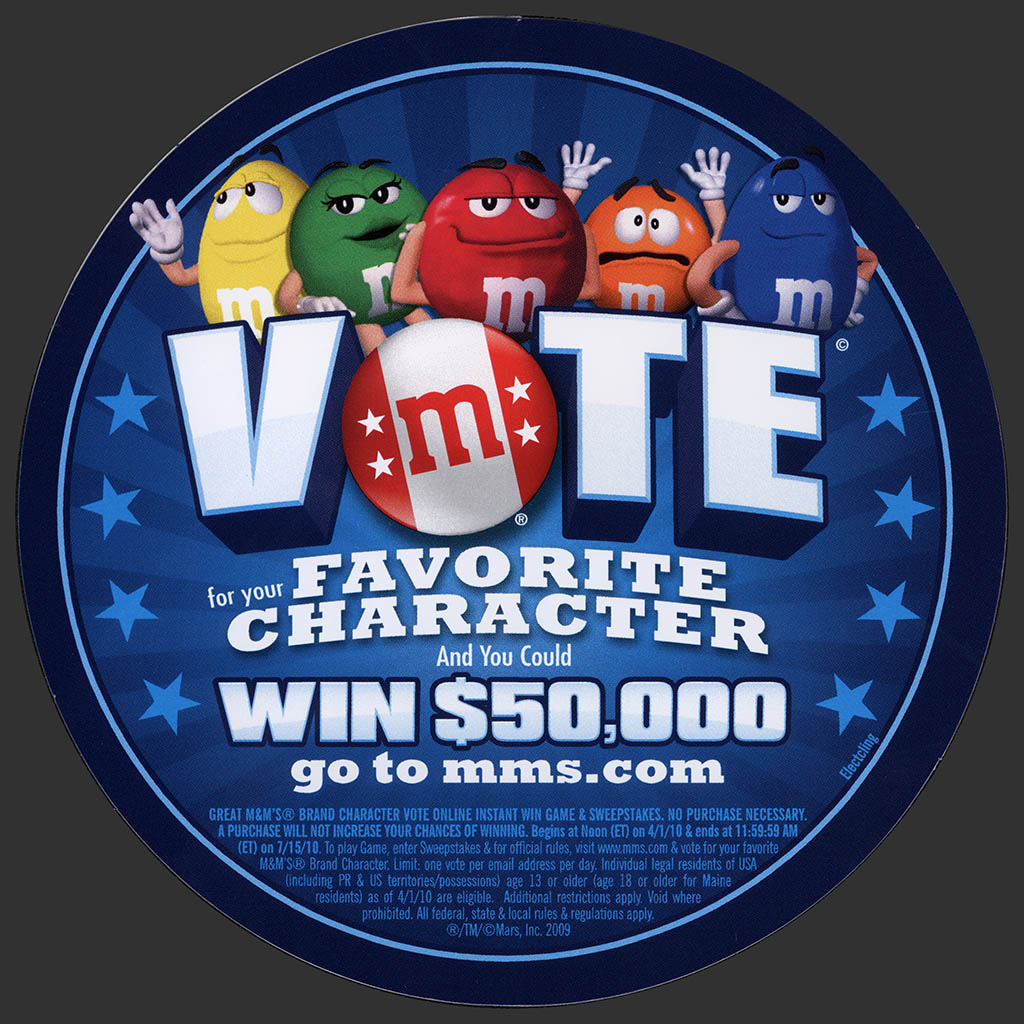 I should note that elections and M&M’s are nothing new.  There are the Presidential M&M’s of course, and looking through my archives I found evidence of an M&M’s vote campaign as early as 1988.   This is a portion of a hat-band that was released back then:

Voting for fun – that seems like a platform we can all get behind, don’t you agree?

And that’s everything I’ve got for today on the electoral world of M&M’s.

[Note:  I did some additional research and it would seem that the M&M’s Election posters were designed out of New Zealand by the talented team at The Craft Shop.]

A New York City based writer, editor and sometimes actor. After spending much of the 1990′s in the comic book business helping tell the stories of Marvel Comics’ X-Men as series editor, he has since split his time between developing his own entertainment properties while still consulting and working on others. Having been described as “the Indiana Jones of lost and forgotten candy”, Jason is one of the country’s premier candy collectors and historians with his discoveries appearing in countless blogs, magazines, newspaper articles, and books. Always happy to share his knowledge and unique perspectives on this colorful part of our popular culture, Jason has consulted with New York’s Museum of Food and Drink and has also been a featured guest on Food Network’s Heavyweights, France’s M6 Capital, and New York’s TheActionRoom.com. My Google Profile+
View all posts by Jason Liebig →
This entry was posted in 1980's, M&M's and tagged candy collecting, candy collection, candy collector, candy wrapper collection, candy wrapper collector, collectible, collecting candy, confectionery, confections, M&M's, M&M's campaign, M&M's election, M&M's mascot, M&M's vote, packaging, sweets, vintage candy wrapper, wrapper. Bookmark the permalink.