Seth Green’s Vintage Butterfinger Bar and a Gold One Too!

The promotion involved a number of online games and contests, as well as a series of online videos featuring Seth Green telling his tale.  The major prize to come out of the promotion was a Butterfinger bar cast in solid gold, valued at $10,000.   You can get an idea of the promotion on this screen grab of the website that ran at the time:

Screen grab of Dudewhereismybar.com site, circa 2009.

Though the prize, videos, and games were a swell bit of online marketing, what caught my attention was the release of a special vintage-style packaged Butterfinger release.  These Butterfingers, featuring special vintage style packaging, would be given out free at Circle K locations, and only be available for one day: October 22nd, 2009.

This all stands as quite an unusual promotion, but one especially appealing to a candy collector.  The details of it created an obstacle I had to overcome; there were no Circle K’s anywhere near me.  Learning of the giveaway only the day before it was to occur, I immediately went online to try to find the nearest Circle-K.  The closest was at least an hour away.

I sent the word out to my friends over the internet, and at first came up empty.  An old friend from Los Angeles visited two different Circle-K’s on the date and found no special Butterfingers, nor anyone who knew a thing about them.   I wondered if I wasn’t going to be able to find one of these elusive candy bars.  Time was running out.

Fortunately, a pal of mine in the Midwest managed to snag two of these special Butterfingers, and let me have his extra (thanks, Gregg!).    Here it is: 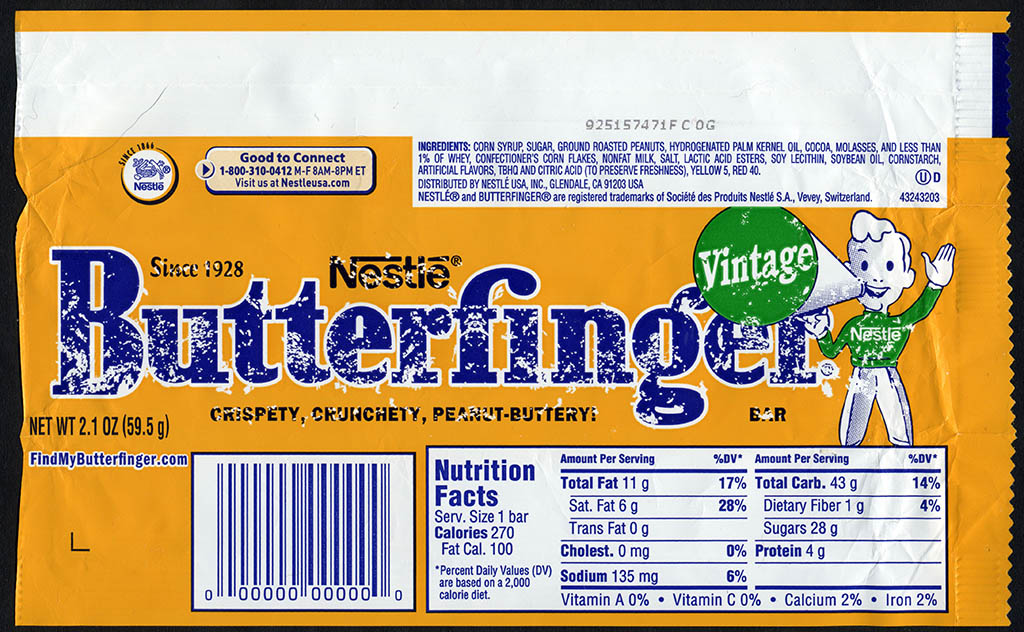 Note that these one-day giveaway bars feature all zeroes for the UPC – preventing unscrupulous retailers from attempting to sell them.

The mascot included on this wrapper was first introduced in the 1920’s when Butterfinger was a Curtiss brand, and the mascot was found on all of their wrappers.  His name was the NRG Kid (not sure what that stands for) and here he is on a cool Baby Ruth wrapper from 1937: 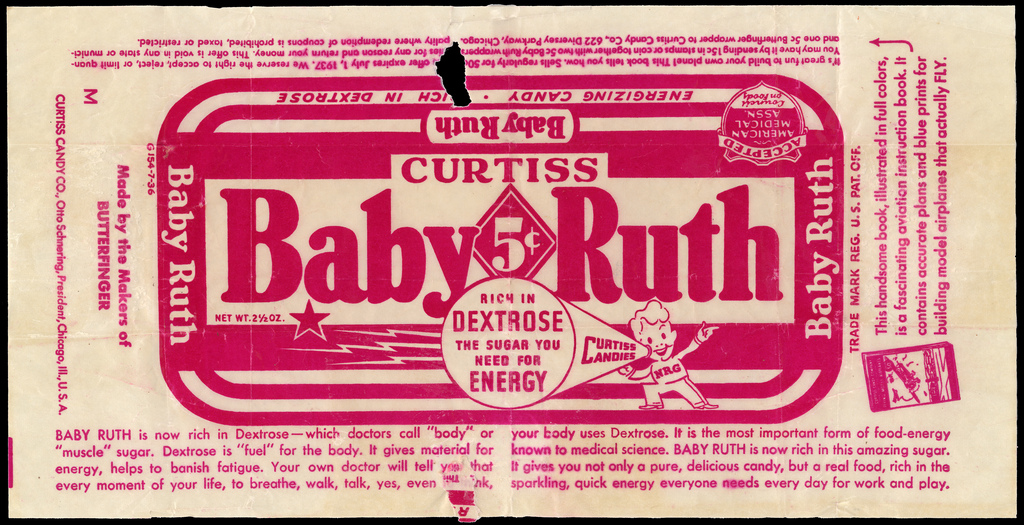 I managed to pick up one other interesting piece from this promotion – the insert card for the display boxes.  It would seem that these special edition bars shipped in standard Butterfinger display boxes, while these insert cards were included to highlight the promotion: 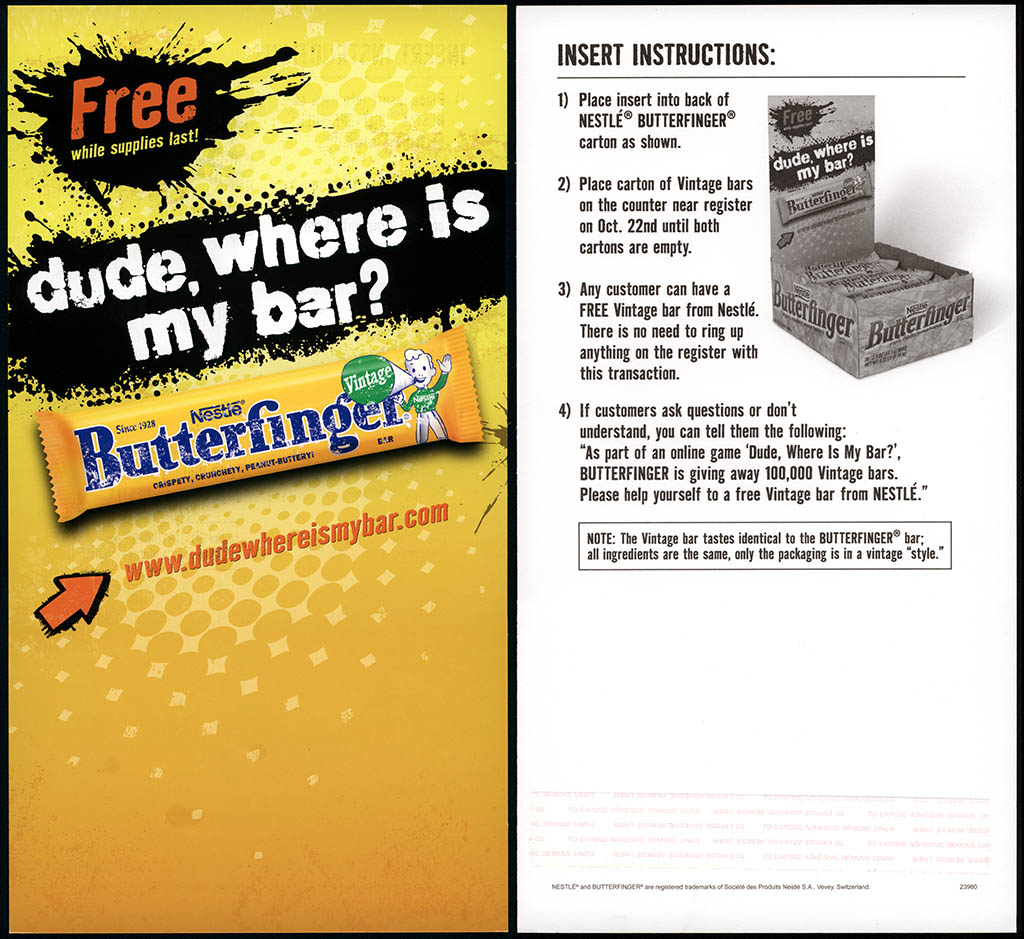 It was great to see one of the big candy makers embrace their heritage like this, with a fun online promotion.  As a collector, the one-day-only nature of the vintage packaged bars created a challenging scenario that I was relieved to overcome, when I finally added one of these to my collection.

That’s nearly everything I have to share on this interesting bit of candy marketing.  One last bit of fun, before I wrap-up.  This YouTube video appears to be the introductory video produced for the promotion.  It features Seth Green lamenting the loss of his precious vintage Butterfinger.   I’ll let the video speak for itself.

A New York City based writer, editor and sometimes actor. After spending much of the 1990′s in the comic book business helping tell the stories of Marvel Comics’ X-Men as series editor, he has since split his time between developing his own entertainment properties while still consulting and working on others. Having been described as “the Indiana Jones of lost and forgotten candy”, Jason is one of the country’s premier candy collectors and historians with his discoveries appearing in countless blogs, magazines, newspaper articles, and books. Always happy to share his knowledge and unique perspectives on this colorful part of our popular culture, Jason has consulted with New York’s Museum of Food and Drink and has also been a featured guest on Food Network’s Heavyweights, France’s M6 Capital, and New York’s TheActionRoom.com. My Google Profile+
View all posts by Jason Liebig →
This entry was posted in Chocolate, Nestle and tagged candy collecting, candy collection, candy collector, candy wrapper collection, candy wrapper collector, collectible, collecting candy, confectionery, confections, packaging, sweets, vintage candy wrapper, wrapper. Bookmark the permalink.

3 Responses to Seth Green’s Vintage Butterfinger Bar and a Gold One Too!