Today I’m going to cover a wonderful little product that was produced by the Beech-Nut company from the mid-1960’s likely until the early 80’s:  Sour Bites.

Sour Bites were a bit like Sweetarts, though they incorporated fun animal mascots onto their packaging and even the candy itself.  Offered in foil packages, just like the Sweetarts of the day, they were originally available in single-flavors as well as assorted variety.

Unfortunately, I’ve never been able to track down a vintage Sour Bites package, so today I must rely on the scattered bits of reference that have been turned up over the years.

A washed out film reel of an original 1960’s Sour Bites TV commercial has been online for a few years, and within it, you can see a couple of the different single-flavor packs.  Each one sported a different animal. 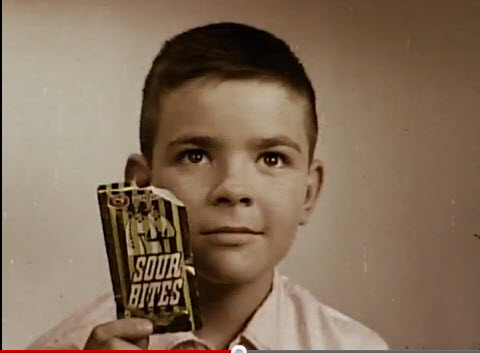 I have to wonder how many variety of foil packs they produced back then?  They show a candy piece with an elephant mascot on one, so I would guess that was another of the animals.

Here’s a small bit of Sour Bites signage from the 1960’s:

The “Yipes! Stripes!!” call-out slogan was used by Beech-Nut for another of their products, likely before the introduction of Sour Bites, but maybe concurrently.  You can see it used here on a cardboard shelf-talker for Fruit Stripe Gum: 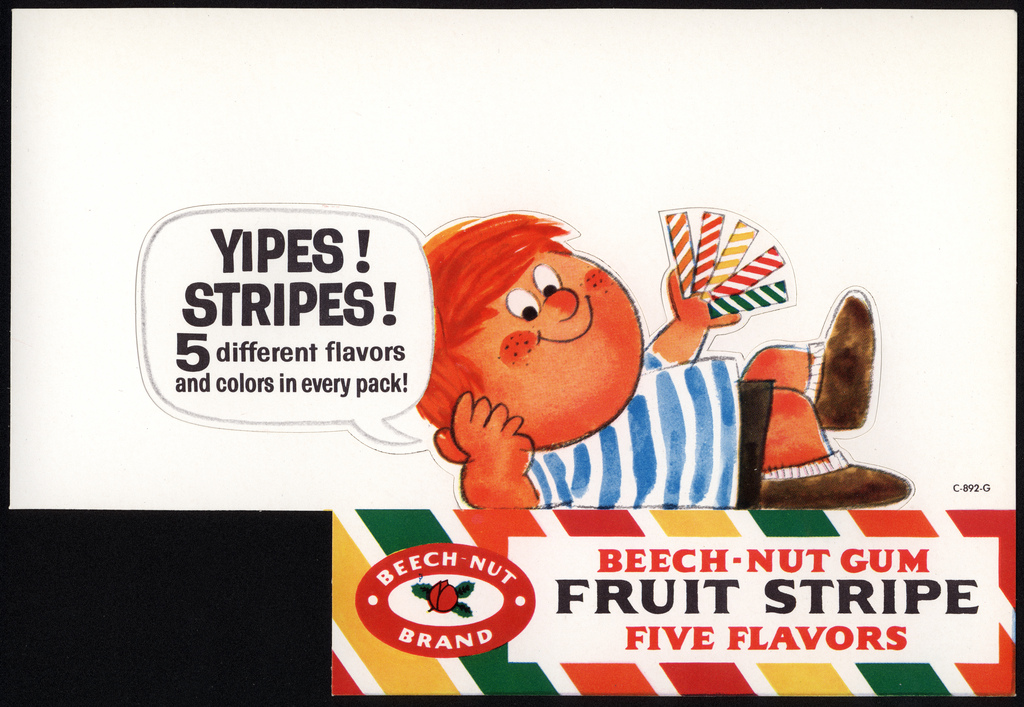 Later on, Sour Bites would make a guest appearance in multi-packs of Fruit Stripe gum, as you can see here:

So it would seem that Fruit Stripe Gum and Sour Bites were somewhat connected through much of Sour Bites lifespan.  Sour Bites animal mascots were always striped, so I wonder if that’s where the Fruit Stripe Zebra got his look?

By the 1970’s, it would seem that the single-flavor packs of Sour Bites were done away with, in favor of the assorted packs.  Here’s a trade ad from the 1970’s, highlighting a “new vend pack” for Sour Bites: 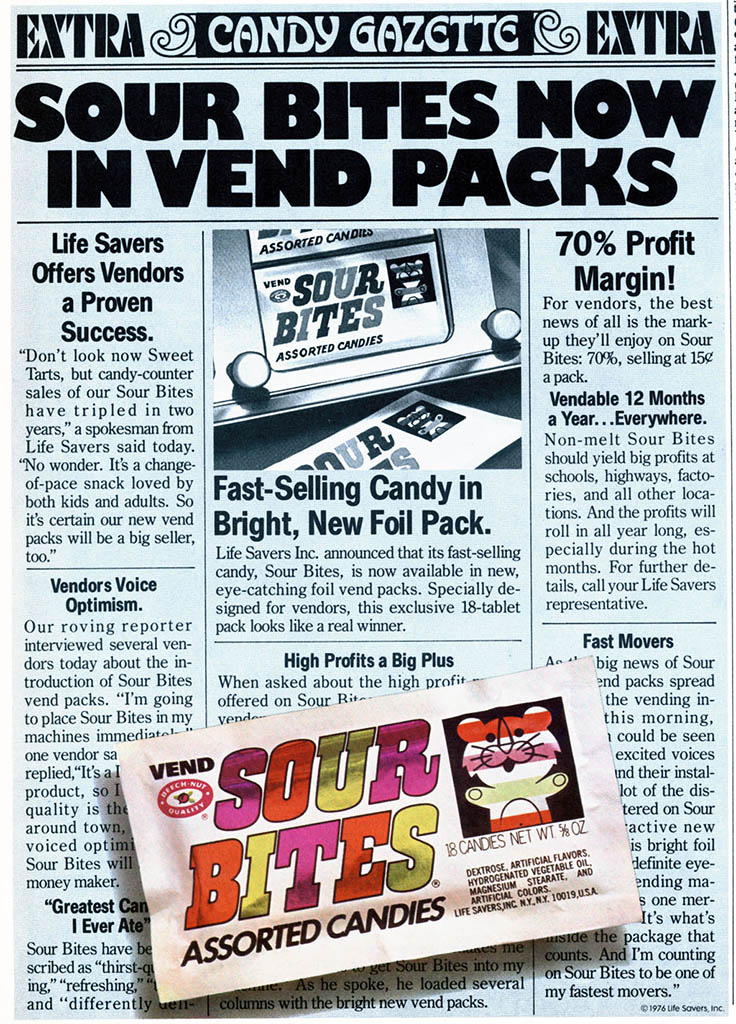 From the images I’ve been able to track down, I’ve determined that the non-vending packs in the late 70’s were a less-rectangular affair.  Here’s a trade ad from 1977 featuring a shelf full of vintage candy goodness.  I’ve highlighted the very tiny bit of the image that shows Sour Bites: 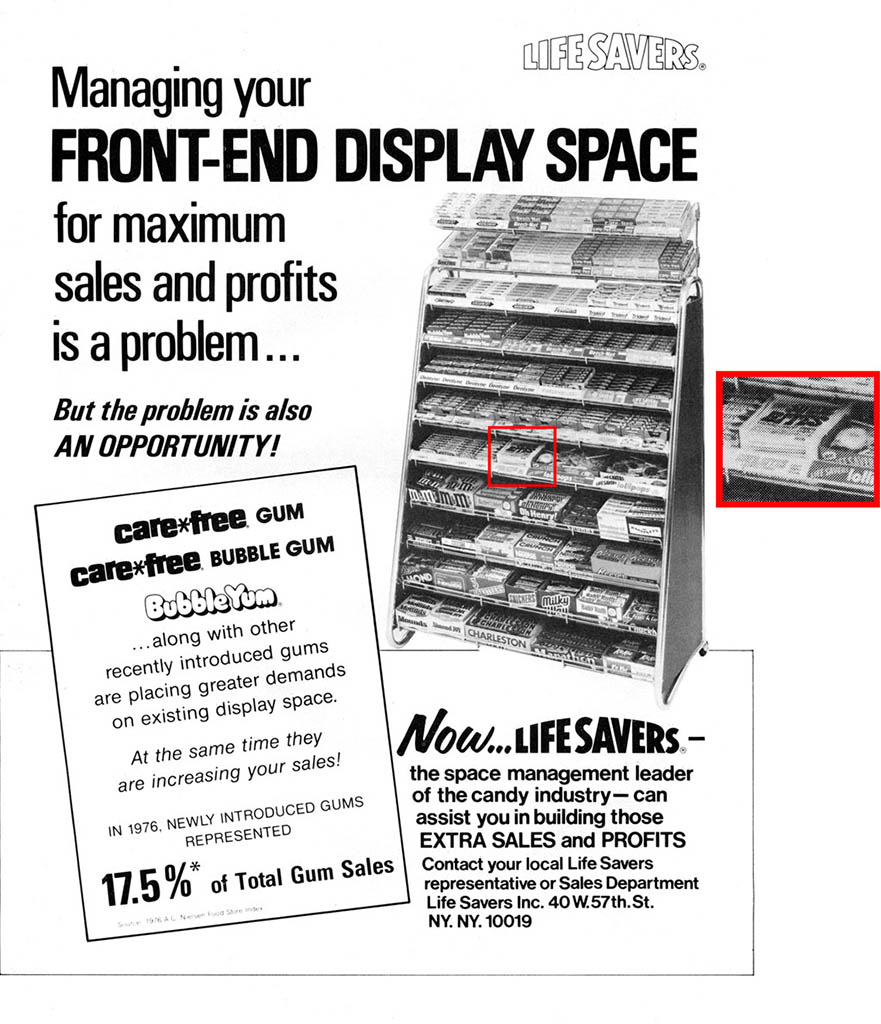 For a much better look at this late-run version of Sour Bites packaging, here’s a clipping from an early 80’s candy dealer catalog: 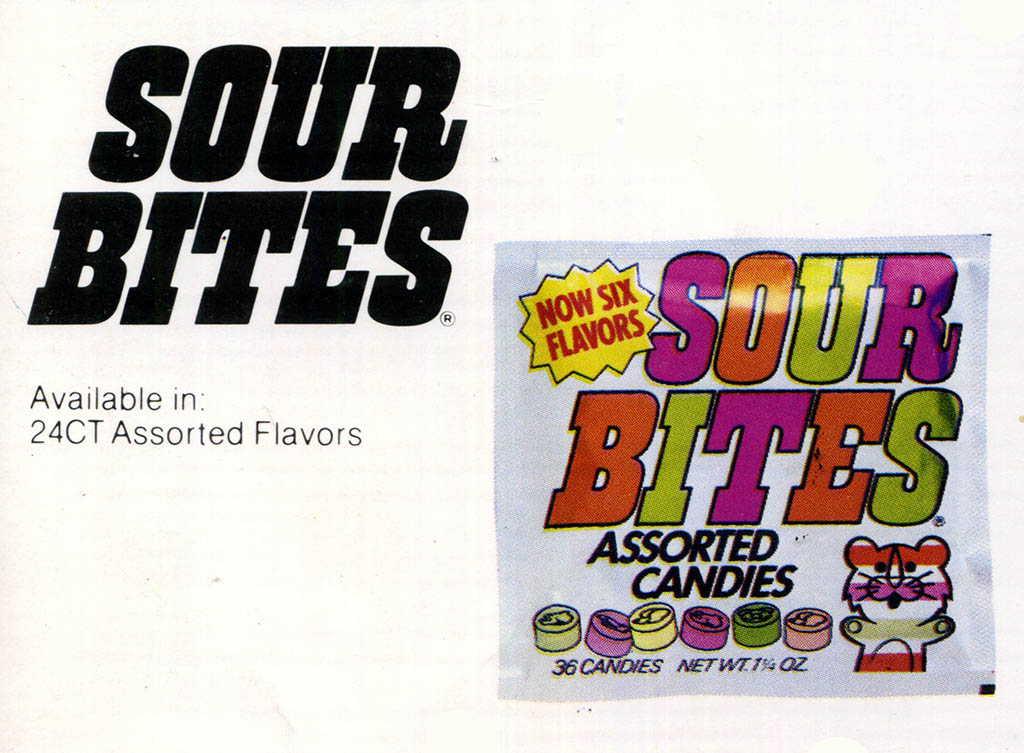 The lion mascot appears to have always represented the assorted Sour Bites variety, and I think he’s pretty appealing.  Here’s a shelf-tag sticker, likely from the 1970’s, featuring the colorful cat:

And that’s really everything I’ve got for Sour Bites.  If anyone out there finds something I don’t have or has an actual Sour Bites package, please get in touch, as I’d love to include more about this brand in a future post.

At the top of today’s piece, I teased a bit about a 1960’s TV commercial for Sour Bites.  Here it is:

And that’s everything for today’s post.  I hope you’ve enjoyed this look back at the wonderful forgotten treat that was Sour Bites.  See you next time!

A New York City based writer, editor and sometimes actor. After spending much of the 1990′s in the comic book business helping tell the stories of Marvel Comics’ X-Men as series editor, he has since split his time between developing his own entertainment properties while still consulting and working on others. Having been described as “the Indiana Jones of lost and forgotten candy”, Jason is one of the country’s premier candy collectors and historians with his discoveries appearing in countless blogs, magazines, newspaper articles, and books. Always happy to share his knowledge and unique perspectives on this colorful part of our popular culture, Jason has consulted with New York’s Museum of Food and Drink and has also been a featured guest on Food Network’s Heavyweights, France’s M6 Capital, and New York’s TheActionRoom.com. My Google Profile+
View all posts by Jason Liebig →
This entry was posted in 1960's, 1970's, 1980's, Sour Candy and tagged 1960's candy, 1970's candy, 60's candy, 70's candy, Beech-Nut, candy collecting, candy collection, candy collector, candy wrapper collection, candy wrapper collector, collectible, collecting candy, confectionery, confections, mascots, packaging, sour, Sour Bites, Sweetarts, sweets, vintage candy wrapper, wrapper. Bookmark the permalink.