Stop The Presses!! A Wonka-Weekend Rewind!

I’ve said many times that what I love about candy history is that there are always surprises in store, even when you think you’ve got something all figured out.  Well, last night was no different.

A few hours after getting the second-half of my big Wonka Weekend finished and posted last night, I received an e-mail that was a bit of a shocker and sort of derailed a lot of what I’d written over the preceding 72 hours – but not really in a bad way.

It all began when I e-mailed my pal, Brandon Coker, as I thought he’d enjoy reading what I’d brought together on these two Wonka classics.  Brandon is a fellow collector/historian, as well as a good friend.  Over the years, we’ve assisted one another during our investigations into the oftentimes obscure history of vintage packaging.

After seeing what I’d posted, Brandon e-mailed to tell me that he’d recently uncovered new information and images regarding the early years of Wonka.

As I looked over the images and information he sent, my first thought was, “Can I rewind the last few days so I can include all of this awesome new material into what I’ve already written?”  Anyone with a spare TARDIS I can borrow?

Of course you can’t turn back time, so I opted for this metaphorical “Stop the Presses” post, today.

Brandon explained the source of his findings: “I found these a while back, doing some research in the US Patent & Trademark Office archives.”  And with that bit of background out of the way, let’s get to the goodies! 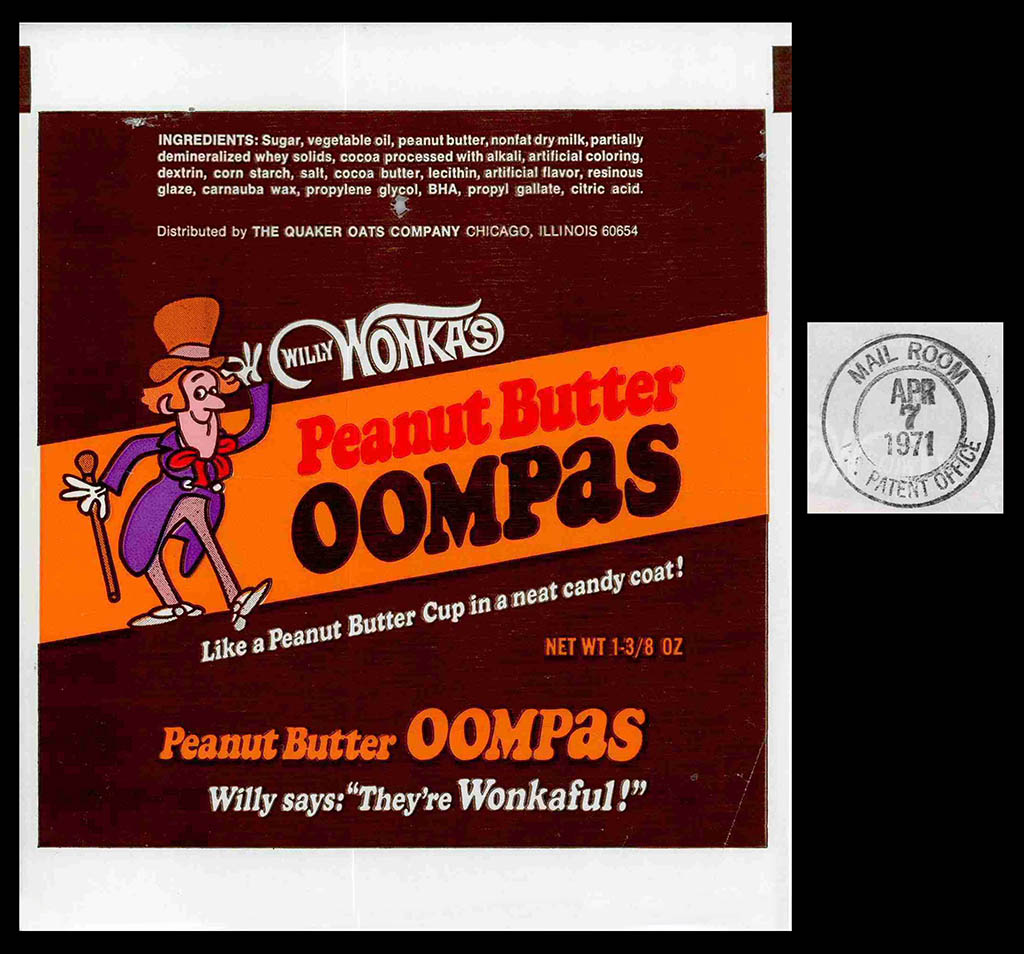 Next up is a mid-70’s style wrapper for Oompas.  This would seem to match the style shown for the 1975 Super Skrunch wrapper I revealed in my earlier article.  This is another piece I’ve never seen before: 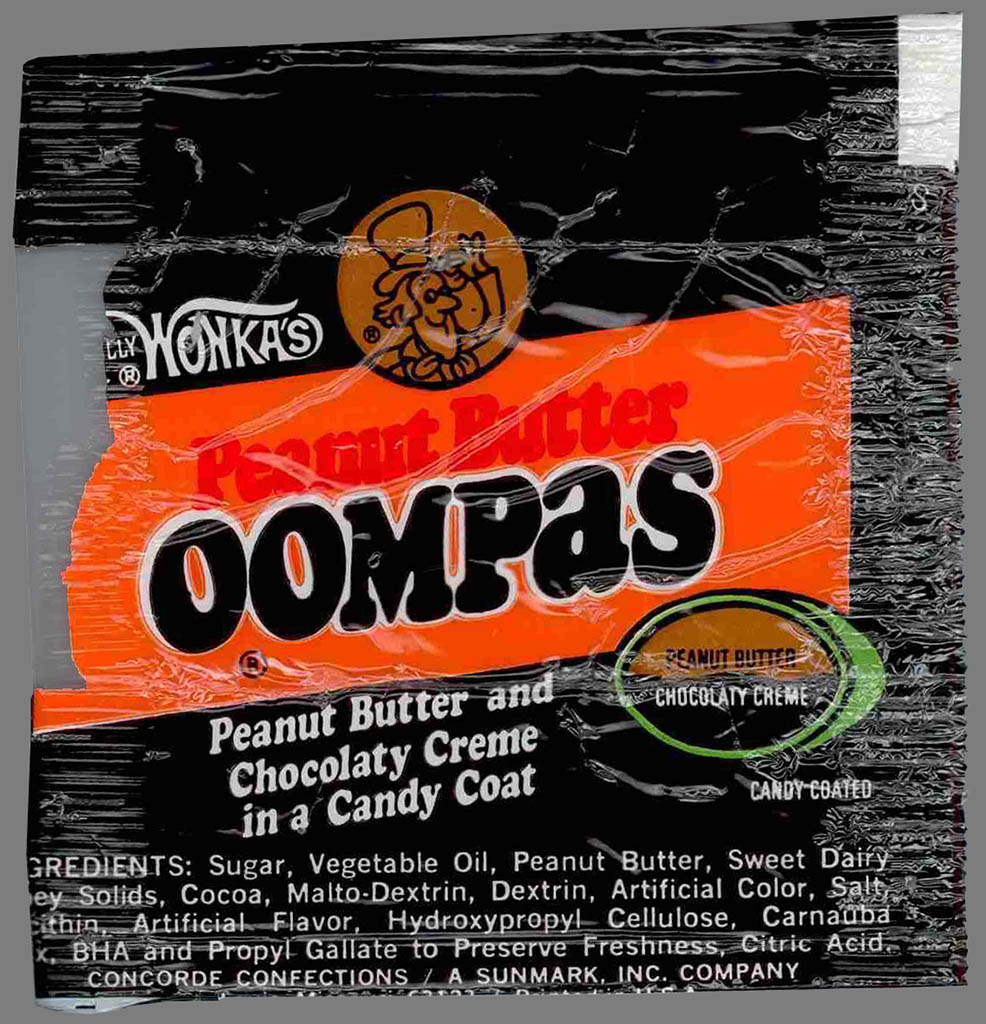 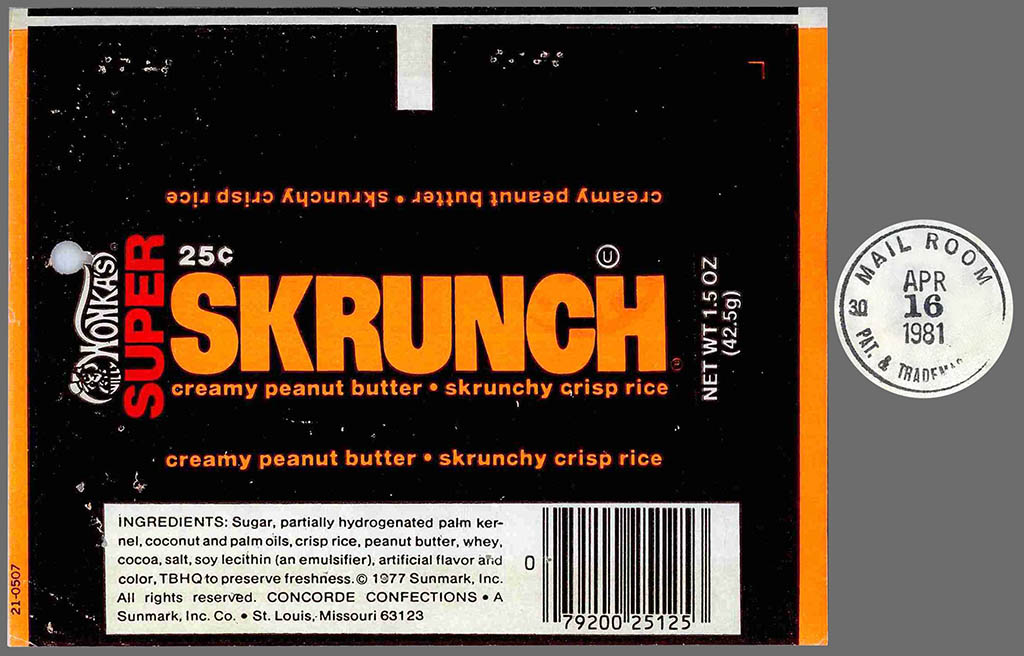 And finally, here’s a 2001 USA version of the Oompas fruit chews packaging: 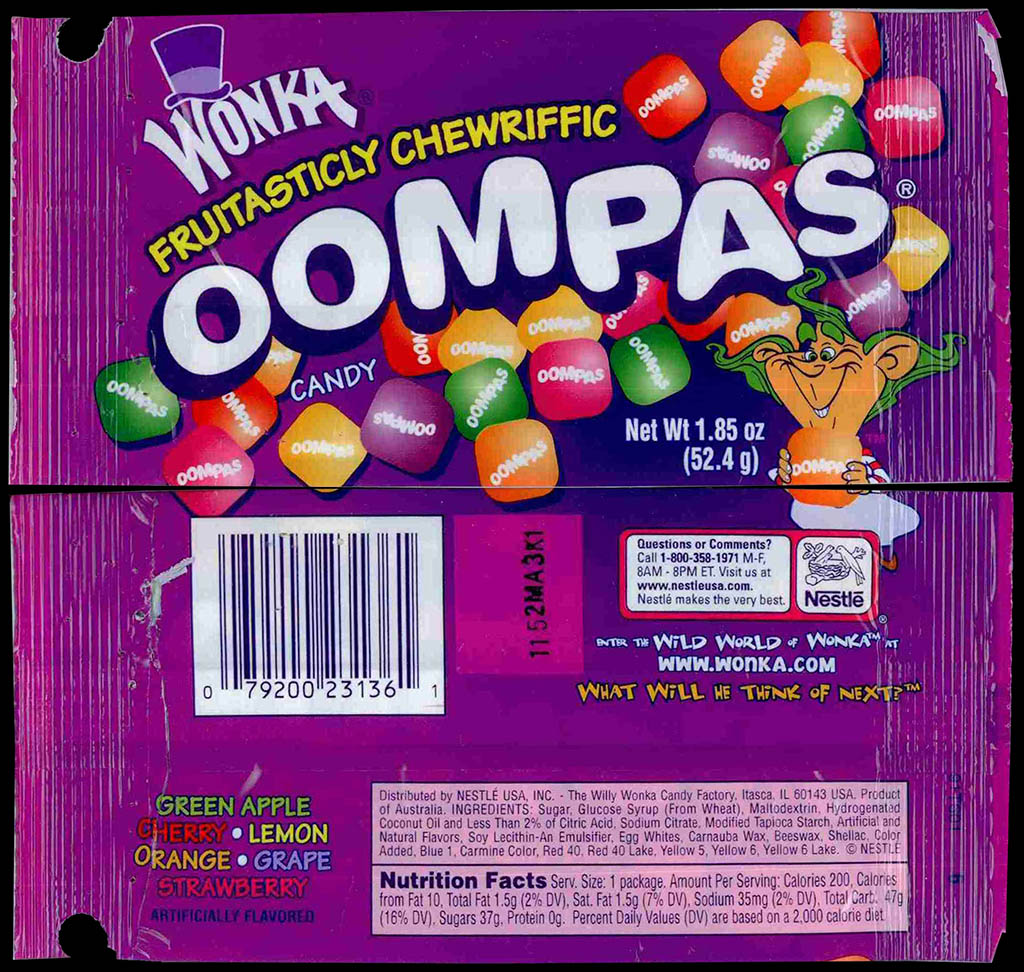 The following two wrappers deserve special introduction, and possibly a bit of a disclaimer.  It is my belief that these two wrappers were never put into mainstream production.  I theorize that these were produced in extremely limited amounts, only to meet the minimal requirements for trademark renewal.

First up… a Wonka Oompas wrapper dated from 1991! 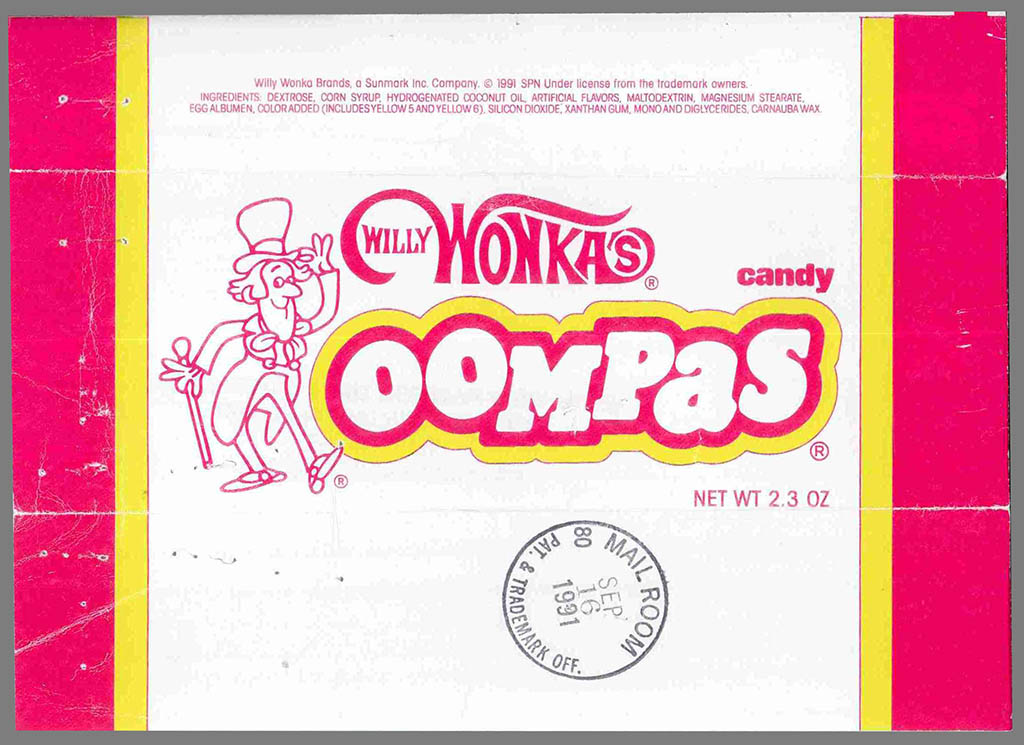 This Oompas wrapper proof above features only two-color graphics, but that’s not all that’s unusual about it.  The logo used is the same as that from the 1981 Oompas package, while also including the full-body mascot from the early 70’s packs.  It’s a very strange mix, and adds to my belief that this was a limited run produced purely for trademark renewal.

Once again, this wrapper seems to be an odd mix of modern (for 1995) and vintage.  There are many elements ripped right from the 70’s wrappers, while clearly incorporating all of the proper design elements needed for a 1995 production wrapper.  While it’s not impossible that this bar was given a brief production run, on this I am doubtful.  My guess is, it was printed up and sold to one store simply to warrant the renewal of the trademark.

The final image today doesn’t come from the U.S. Trademark Office archives, but instead comes from Brandon Coker’s personal collection.  This is an image of a kids-size t-shirt, produced as a premium in the 1970’s for Willy Wonka’s Super Skrunch.  I hope you’ll agree that it’s pretty awesome:

And that’s everything for this unexpected Wonka Weekend Rewind!  See you next time!

A New York City based writer, editor and sometimes actor. After spending much of the 1990′s in the comic book business helping tell the stories of Marvel Comics’ X-Men as series editor, he has since split his time between developing his own entertainment properties while still consulting and working on others. Having been described as “the Indiana Jones of lost and forgotten candy”, Jason is one of the country’s premier candy collectors and historians with his discoveries appearing in countless blogs, magazines, newspaper articles, and books. Always happy to share his knowledge and unique perspectives on this colorful part of our popular culture, Jason has consulted with New York’s Museum of Food and Drink and has also been a featured guest on Food Network’s Heavyweights, France’s M6 Capital, and New York’s TheActionRoom.com. My Google Profile+
View all posts by Jason Liebig →
This entry was posted in 1970's, 1980's, 1990's, Chocolate, Nestle, Peanut Butter, Uncategorized, Wonka and tagged 1970's candy, 70's candy, candy collecting, candy collection, candy collector, candy wrapper collection, candy wrapper collector, collectible, collecting candy, confectionery, confections, packaging, sweets, vintage candy wrapper, Willy Wonka candy, Wonka candy, wrapper. Bookmark the permalink.

3 Responses to Stop The Presses!! A Wonka-Weekend Rewind!