From the Candy Kitchens of… Howard Johnson’s?

Since I’m on the road this week, starting off on my first CollectingCandy.com field trip, I’ve been thinking about hotels and motels.  It used to be, hotel and motel chains were much more distinctive than they are today.  Howard Johnson’s was pretty diversified back in the day and one thing they did that distinguished themselves, was to produce a lineup of confections. They made chocolate bars, taffy, and even chewing gum.  Today, I’m going to share a couple pieces out of my collection, from the “Candy Kitchens of Howard Johnson’s”.

Both wrappers today happen to be of the same product, which I didn’t realize when I sat down to write this today – so I’m getting to show a bit of a mini-timeline.

First up is a Howard Johnson’s Fudge bar wrapper from the 1950’s: 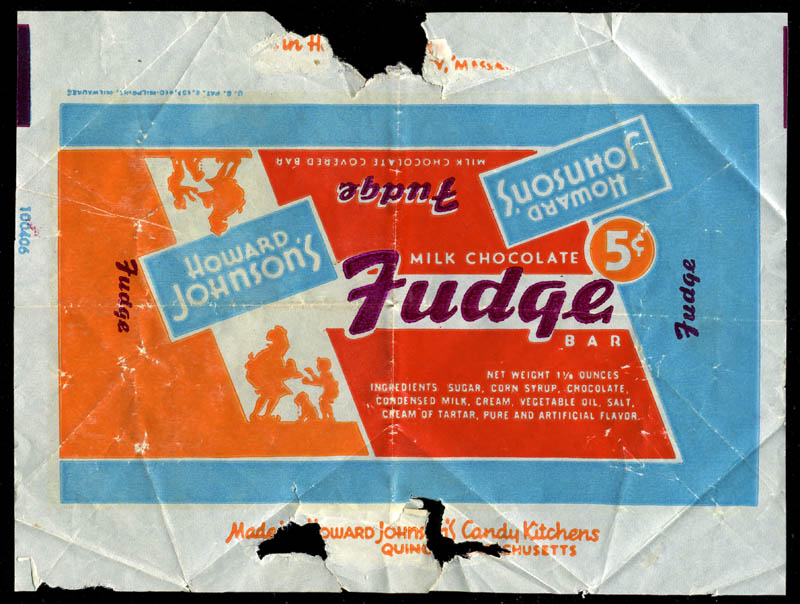 The colors and design for that 50’s wrapper are so great.  You can see the silhouette of the candy chef there – that was the logo for the Candy Kitchens.   Next up is the same treat but from two decades later: 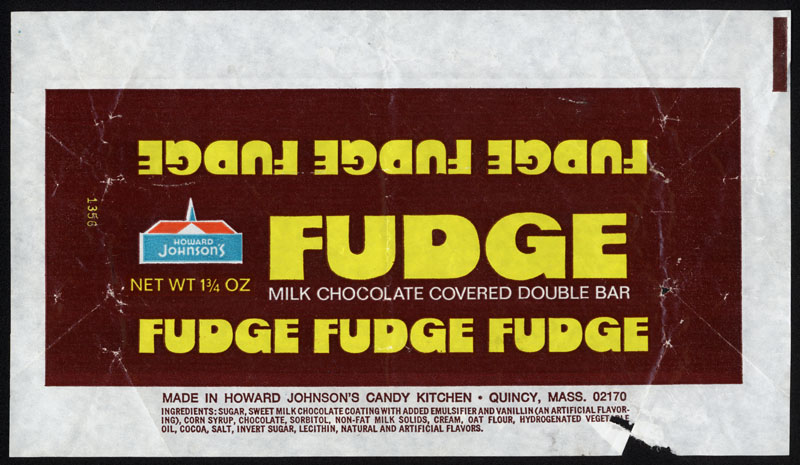 Though not quite as charming as the 1950’s wrapper, the 70’s version has its appeal.  I especially like how the side of the wrapper, or the side of the bar, would have read “FUDGE FUDGE FUDGE”.  It’s enough to make Ned Flanders blush.

That’s it for pieces from my own collection that came out of the unlikely confectioner of Howard Johnson’s.  I do have one other interesting image to share, and it comes via a Flickr pal of mine.  This one is a photo, of a black-and-white photo, of a trio of Howard Johnson’s Salt Water Taffy boxes.  The taffy boxes seen in the photo have detailed illustrations on them, and are boxes I’d love to track down – I’ll bet they’re stunning in color. 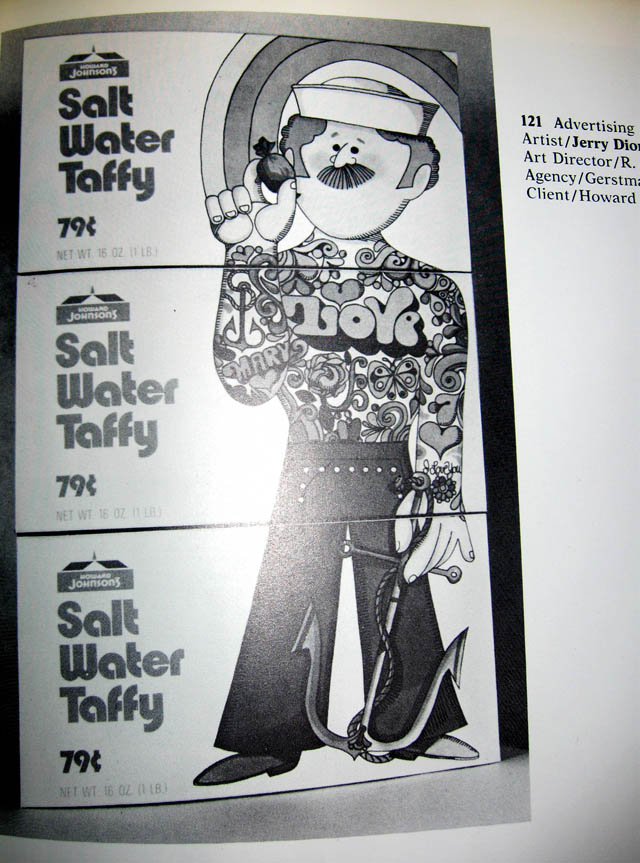 That’s everything for today.  I hope you enjoyed this peek into an unusual bit of candy history.  I know it was a surprise to me when I first encountered Ho-Jo candy.

Tomorrow, we’re going to change up the format a bit, as I’ll be posting from an automobile – on the road.   It’s not going to quite be live-blogging, but it’s as close as we’ll come here on CollectingCandy.com.   I’m hoping that it all works out.  After tomorrow, it’s a big Easter post, and then Monday-Wednesday will be the focus of the whole CollectingCandy.com Field Trip.  Details on Sunday night!

A New York City based writer, editor and sometimes actor. After spending much of the 1990′s in the comic book business helping tell the stories of Marvel Comics’ X-Men as series editor, he has since split his time between developing his own entertainment properties while still consulting and working on others. Having been described as “the Indiana Jones of lost and forgotten candy”, Jason is one of the country’s premier candy collectors and historians with his discoveries appearing in countless blogs, magazines, newspaper articles, and books. Always happy to share his knowledge and unique perspectives on this colorful part of our popular culture, Jason has consulted with New York’s Museum of Food and Drink and has also been a featured guest on Food Network’s Heavyweights, France’s M6 Capital, and New York’s TheActionRoom.com. My Google Profile+
View all posts by Jason Liebig →
This entry was posted in 1950's, 1970's, Chocolate and tagged 1950's, 1970's, 50's, 70's, candy, collectible, collecting, collection, collector, HoJo, hotel, Howard Johnsons, motel, packaging, retro, roadside, roadtrip, sweets, vacation, vintage, wrapper. Bookmark the permalink.

7 Responses to From the Candy Kitchens of… Howard Johnson’s?