The Surprising Candy of Howard Johnson’s!

I’ll often talk about how much I enjoy branded candy packaging that comes from unusual sources like private label or “store brands”.  These aren’t your typical Hershey or Mars offerings in that you can only find them at specific retail outlets, so even in the modern age they can remain quite regionalized and hard to find.

Howard Johnson’s is one such unusual source of branded confections, but it stands out due to its especially rich history.  You see, Howard Johnson’s is one of a select group of businesses that is inevitably intertwined with the history and romance of what is known as “Roadside America” as well as a period when coffee shops and diners ruled the land.  So make the jump to check out the surprising candy of Howard Johnson’s!

For those that only know of the modern HoJo’s and their Howard Johnson’s hotels, it should be noted that before the first hotels with that name were opened in the 1950’s, Howard Johnson’s was a chain of soda fountains/ice cream shops and restaurants.   Tracing their origins back to the 1920’s, Howard Johnson’s as a restaurant went on to experience great success.  Some stats point to it being the largest restaurant chain in the United States throughout the 1960’s and 1970’s.

The last Howard Johnson’s restaurant in Manhattan closed down in 2005 (I was able to visit that Times Square location shortly before they closed) and from what I’ve read, there are sadly only two remaining HoJo restaurant locations still operating in the country. 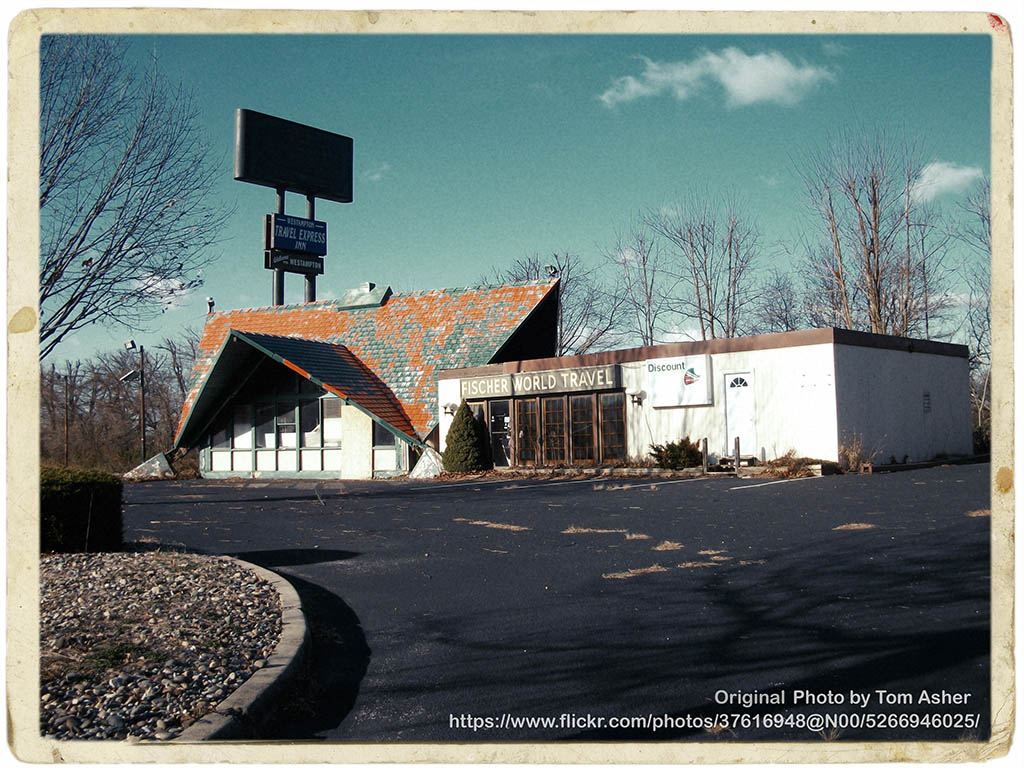 In their heyday, Howard Johnson’s locations were distinctive for their orange roof and peaked colonial-style towers. 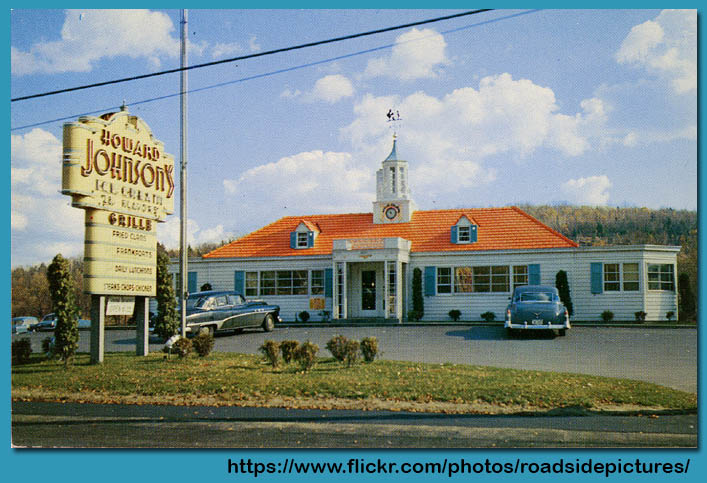 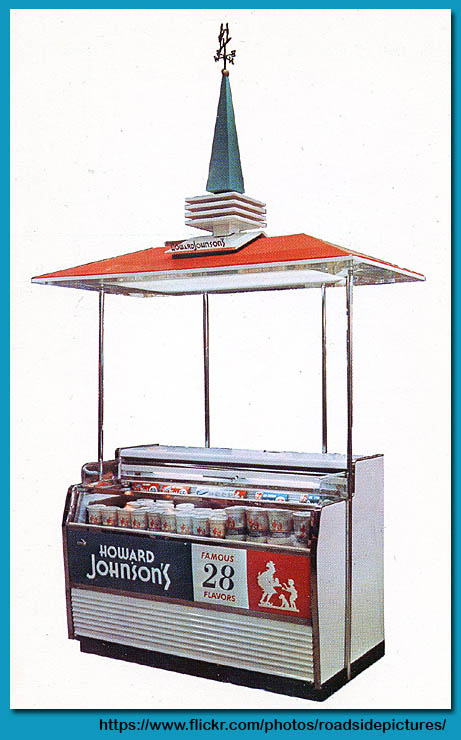 Their early brand mascots were “Simon and the Pieman” as you can see on this vintage place mat: 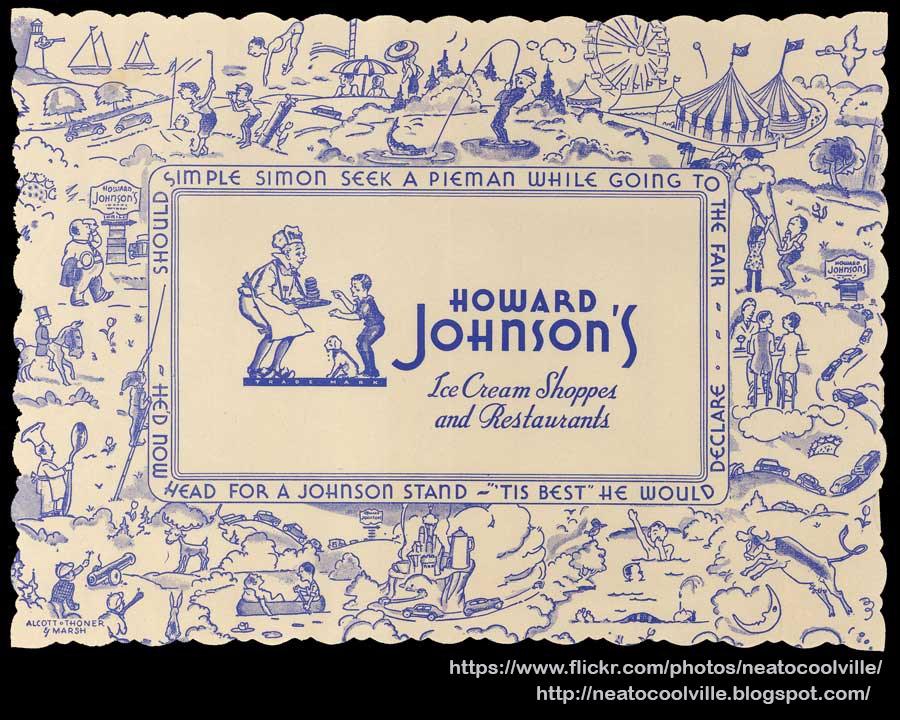 At some point, the Howard Johnson’s company decided to start producing and selling their own private label branded products featuring those mascots.   And from my experience they must have had quite a broad private label line-up at one time.  Here’s a Howard Johnson’s dessert cake box in my collection from 1962 (though I don’t have any, I’ve even seen examples of Howard Johnson’s branded TV-Dinner style boxed meal offerings): 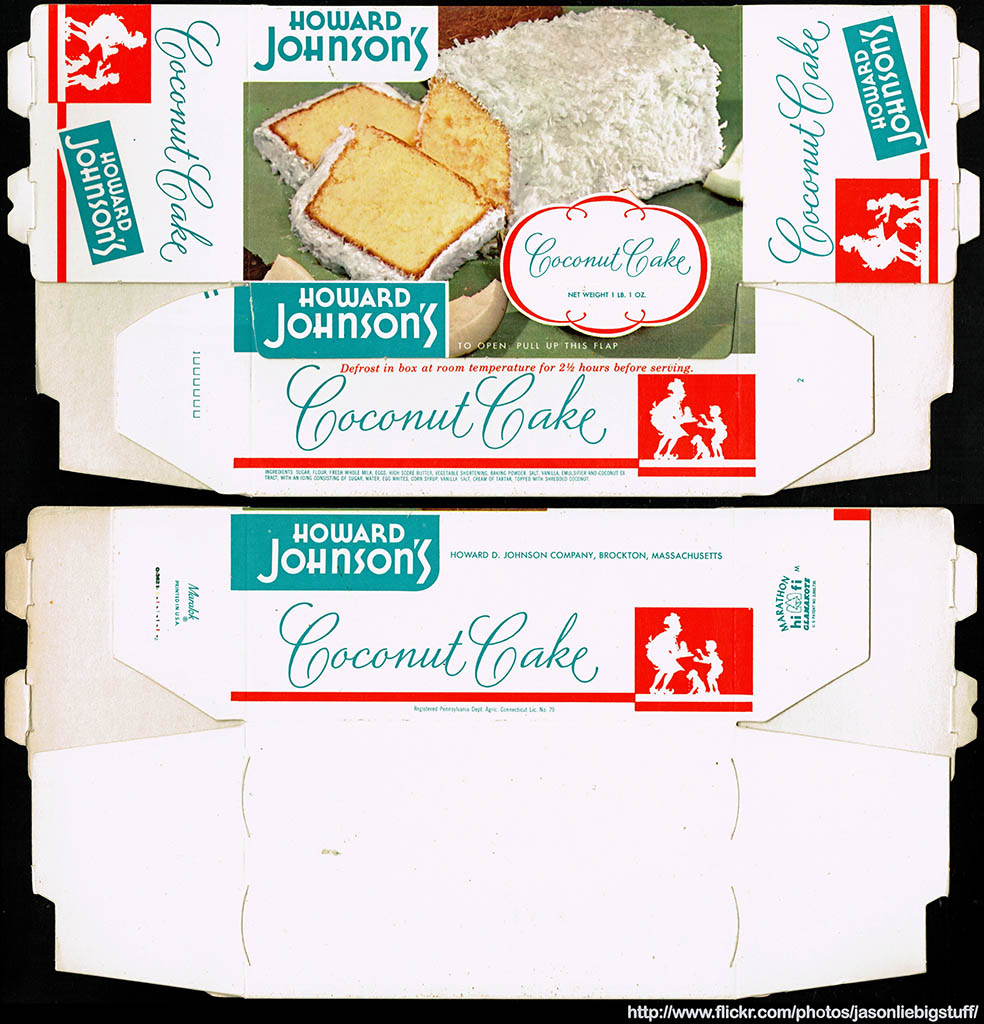 It is from this period that the earliest piece of Howard Johnson’s candy packaging in my collection comes from.  It’s a Milk Chocolate Fudge bar wrapper, likely dating to the 1950’s (though it could possibly slip to the early 1960’s): 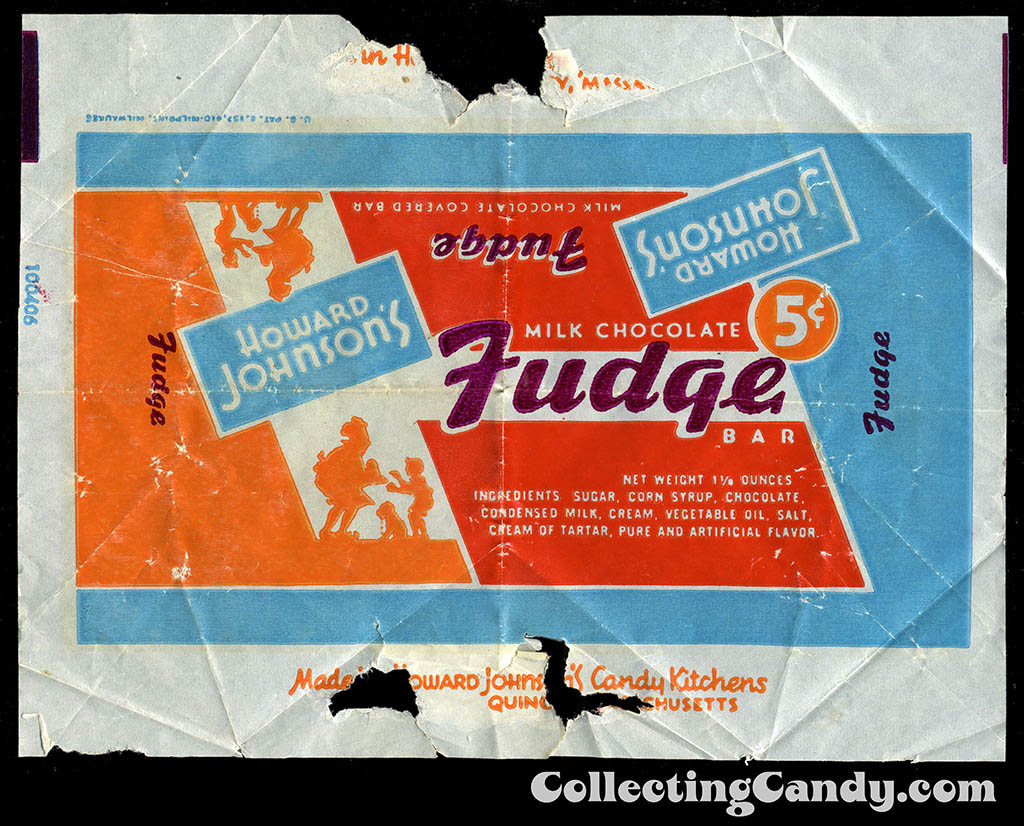 I also have a gum pack outer wrapper from around this period: 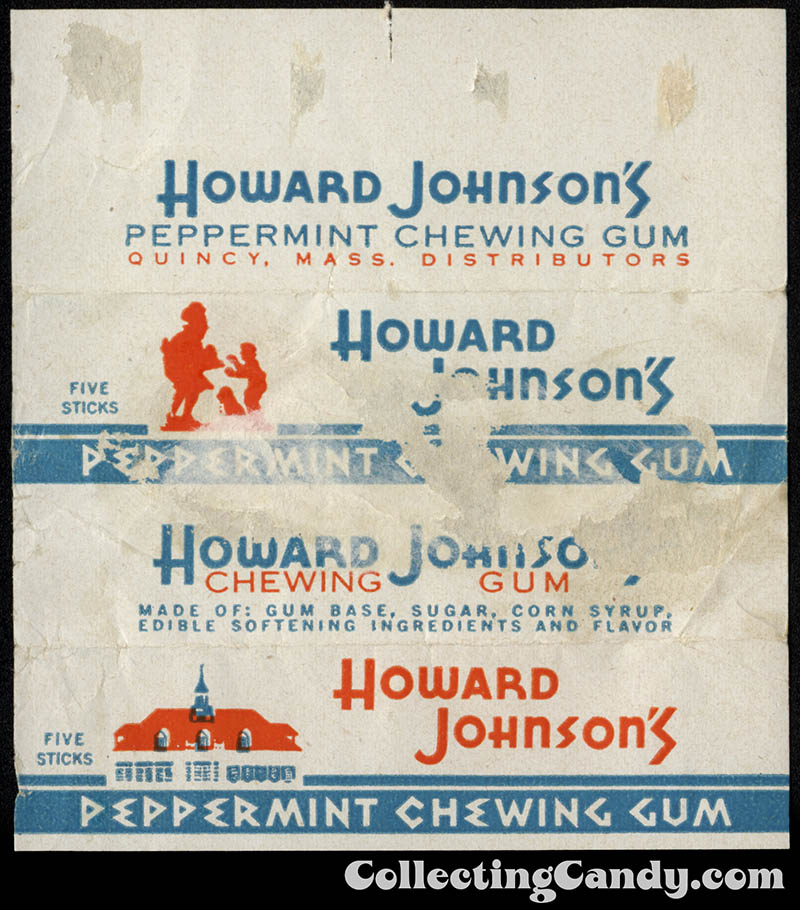 The association of Howard Johnson’s with “under the orange roof” became so tied to the brand that by the 1970’s, their logo evolved to reflect that.  Gone were Simon and the Pieman, now replaced by a more modern graphic logo featuring that orange roof.  That logo is the one featured on the Lifesavers-style Howard Johnson’s roll candy featured in the title image of today’s post: 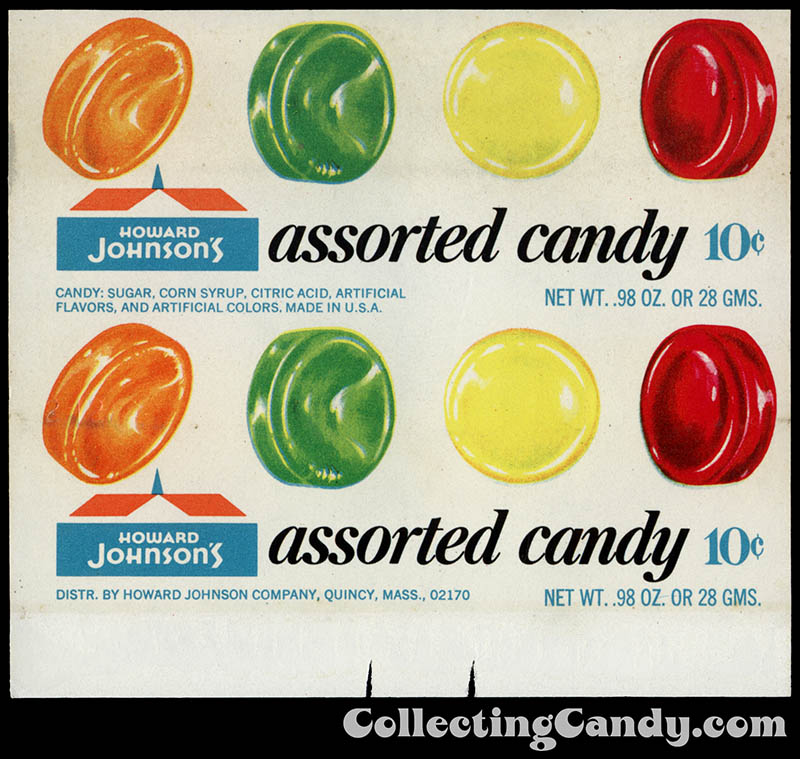 This is the era where I’m pleased to say I have a number of pieces in my Howard Johnson’s candy collection to share. 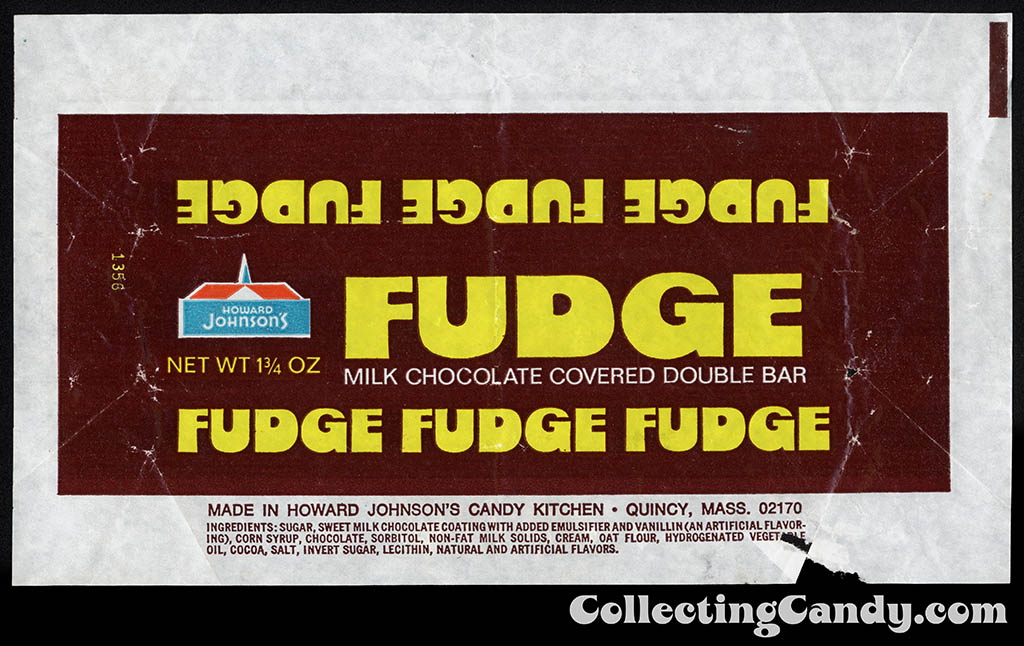 And a couple other variety of bars featuring this same core design and type style: 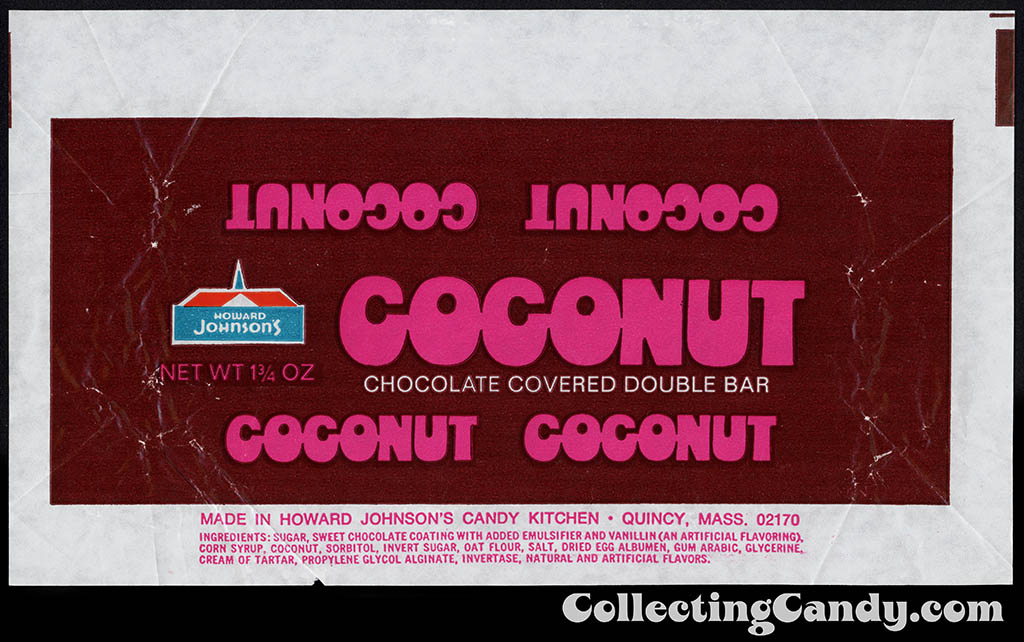 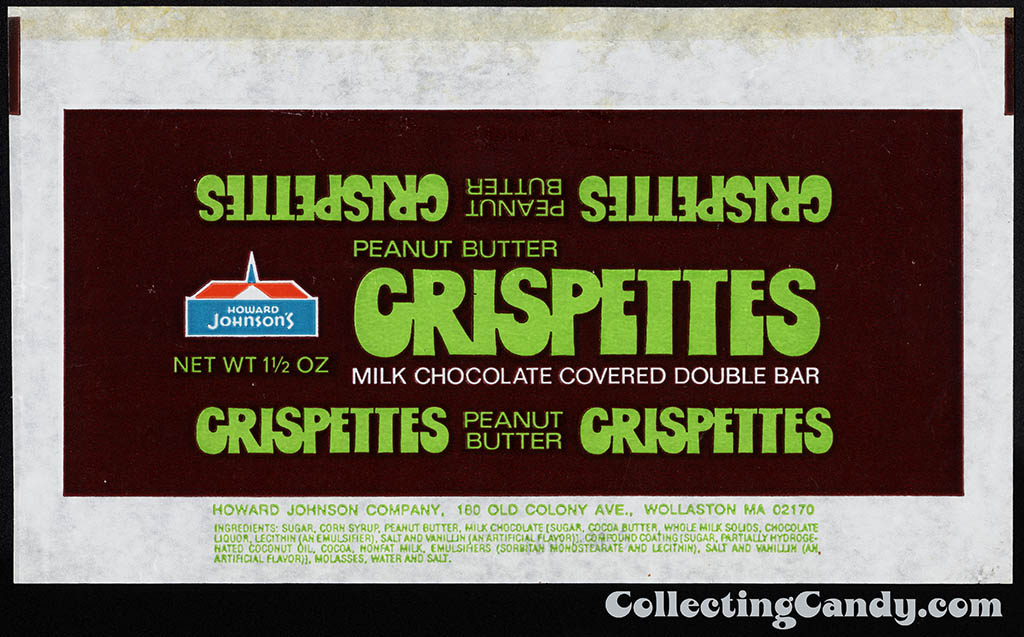 Here are a few Howard Johnson’s chocolate bar wrappers that each sport their own distinctive designs – I think these are pretty great: 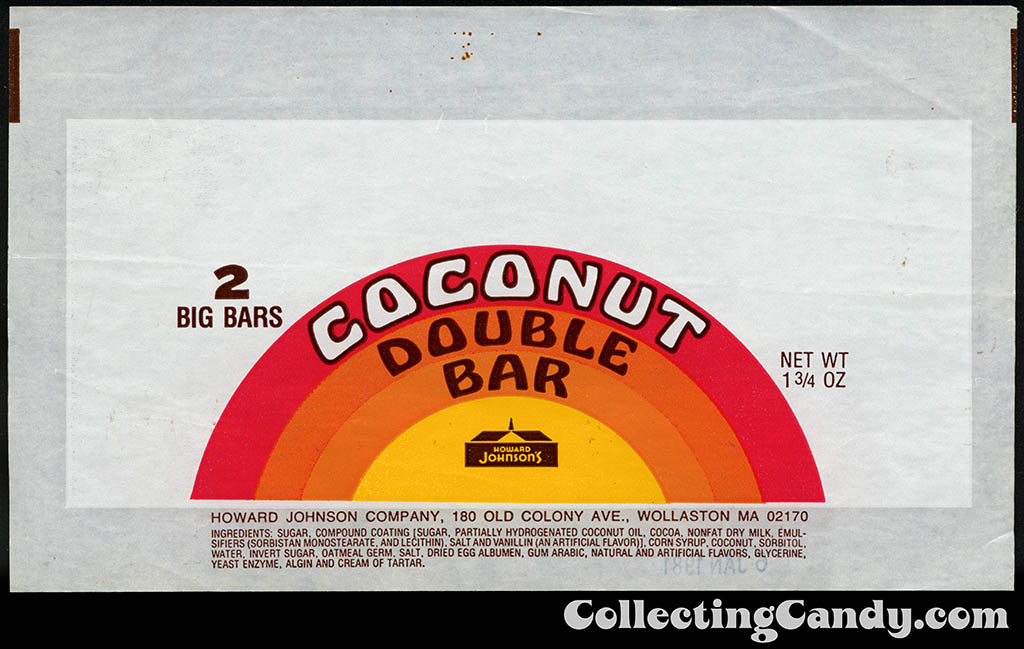 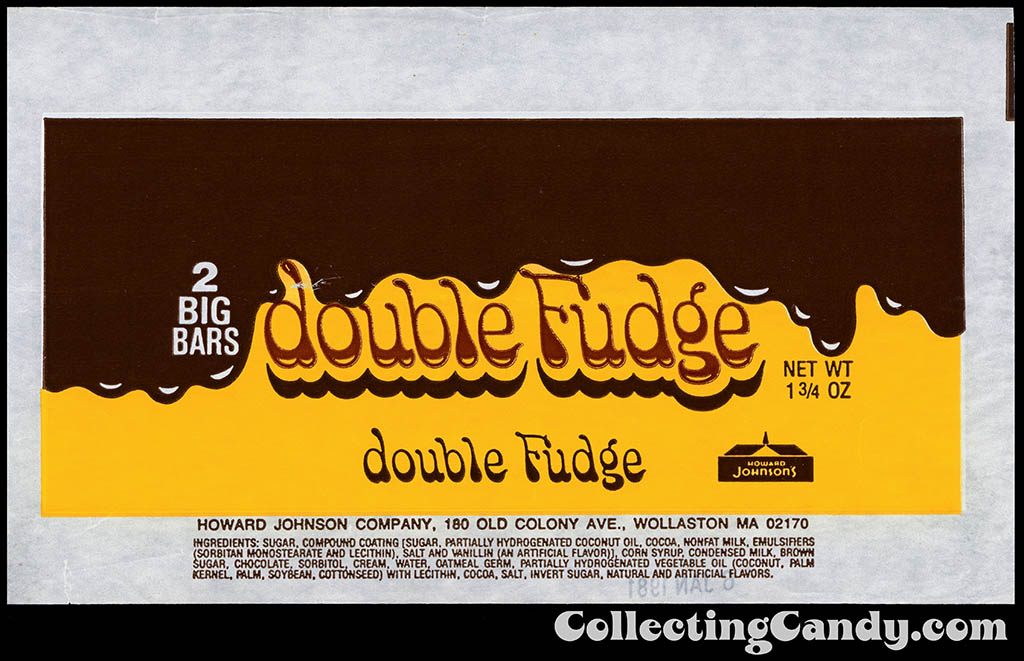 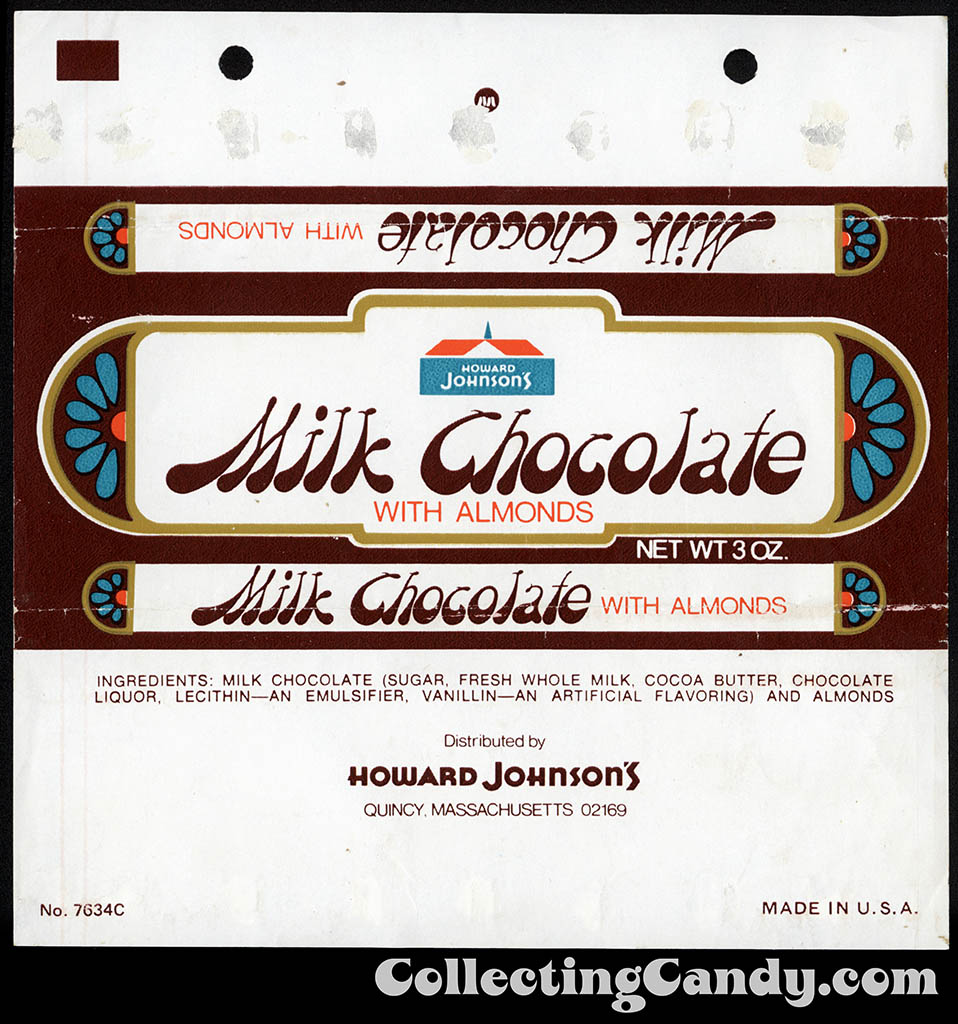 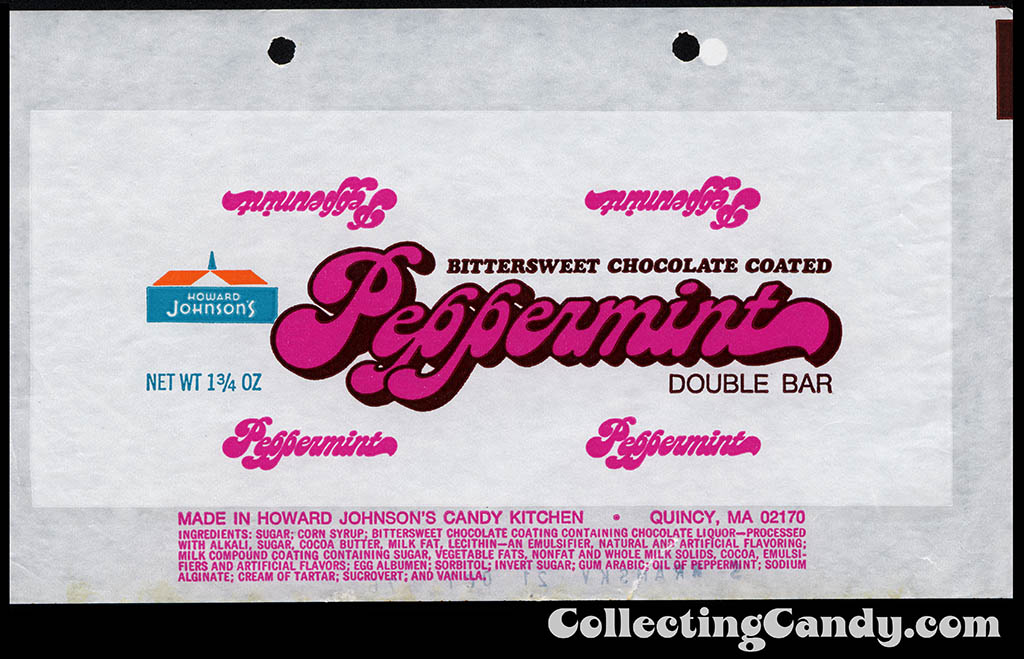 Aren’t those fantastic?  Howard Johnson’s had a pretty great packaging designer working for them in the 1970’s.  I would love to find out who developed and worked on this private label brand back then.

I have two more Howard Johnson’s branded candy pieces to share, and I’ve saved them for now because I’m not entirely sure where I should place them chronologically.  They COULD date back to the late-60’s/early 70’s, and probably do.  It’s just that they feature “old-fashioned” style of packaging, so the graphical elements I’ve used to date the others are not evident here.  Check ’em out: 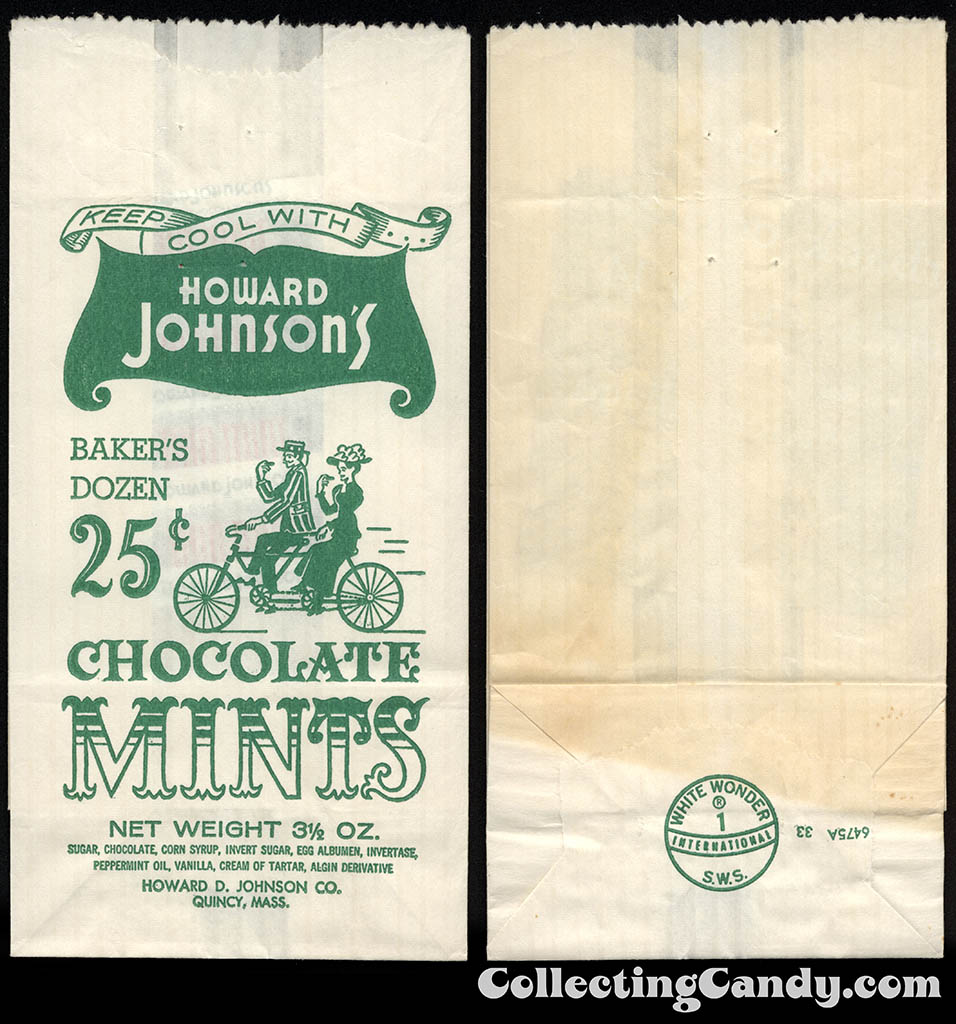 That old-fashioned penny candy style paper bag likely contained a selection of individual foil-wrapped chocolates, as when I acquired it, it contained this wrapper: 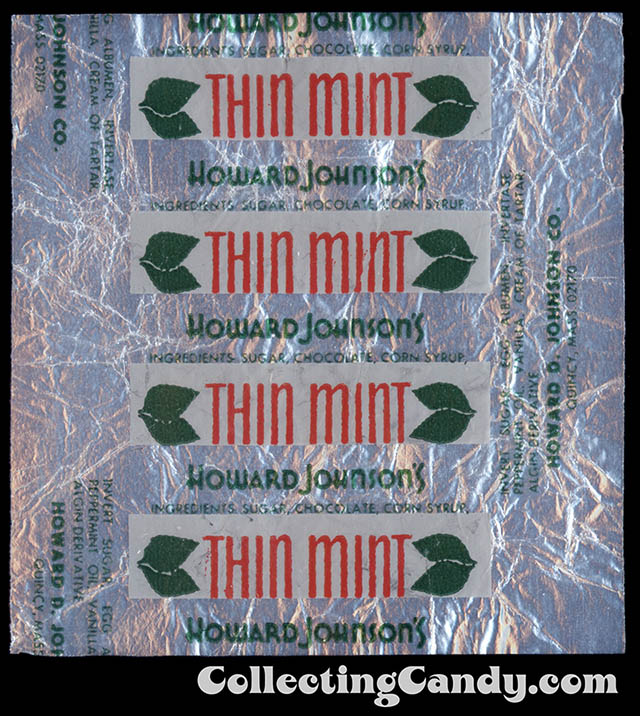 One final thing to share.  It’s a set of three branded foil peel-away lids from jelly containers.  These would have been found in Howard Johnson’s restaurants during the 1970’s: 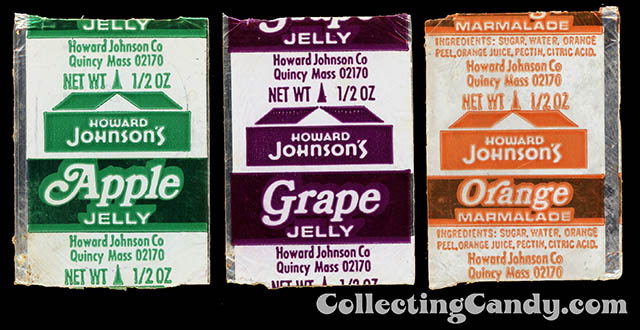 I should note that I first touched upon Howard Johnson’s branded candy back in April of 2012.  Most of that material was incorporated and included in today’s feature, but I wanted to mention it.

That’s everything I’ve got to share today on the surprising candy of Howard Johnson’s.  It’s an area I never expected to contain so much interesting material.   I hope you enjoyed it, and I’ll see you next time!

A New York City based writer, editor and sometimes actor. After spending much of the 1990′s in the comic book business helping tell the stories of Marvel Comics’ X-Men as series editor, he has since split his time between developing his own entertainment properties while still consulting and working on others. Having been described as “the Indiana Jones of lost and forgotten candy”, Jason is one of the country’s premier candy collectors and historians with his discoveries appearing in countless blogs, magazines, newspaper articles, and books. Always happy to share his knowledge and unique perspectives on this colorful part of our popular culture, Jason has consulted with New York’s Museum of Food and Drink and has also been a featured guest on Food Network’s Heavyweights, France’s M6 Capital, and New York’s TheActionRoom.com. My Google Profile+
View all posts by Jason Liebig →
This entry was posted in 1950's, 1960's, 1970's, 1980's, Chocolate, Gum, Hard Candy and tagged 1950's, 1960's, 1970's, 50's, 60's, 70's, candy collecting, candy collection, candy collector, candy wrapper collection, candy wrapper collector, collectible, collecting candy, confectionery, confections, hotel, Howard Johnsons, motel, packaging, packaging design, private label, store brand, sweets, vintage candy wrappers, wrapper. Bookmark the permalink.

22 Responses to The Surprising Candy of Howard Johnson’s!