Long before it became the WWE, the World Wrestling Federation seemed to be the only wrestling game in town.  And it was big, really really big.  The WWF was so big that back in 1991, the world was even presented with a pair of chocolate bars based on the WWF Superstars franchise brand.  Today we’re going to take a look at a pair of surviving wrappers for them.

Though professional wrestling might be a bigger business today, in the late 80’s and early 90’s it was exploding onto the pop-culture scene in ways it never had before.  There were WWF action figures, bed sheets, video games and everything in between.

The “WWF SuperStars” branding was part of the WWF’s trademarked licensing push and it even showed up in the cereal isle.  I have a Superstars cereal box example my cereal  collection: 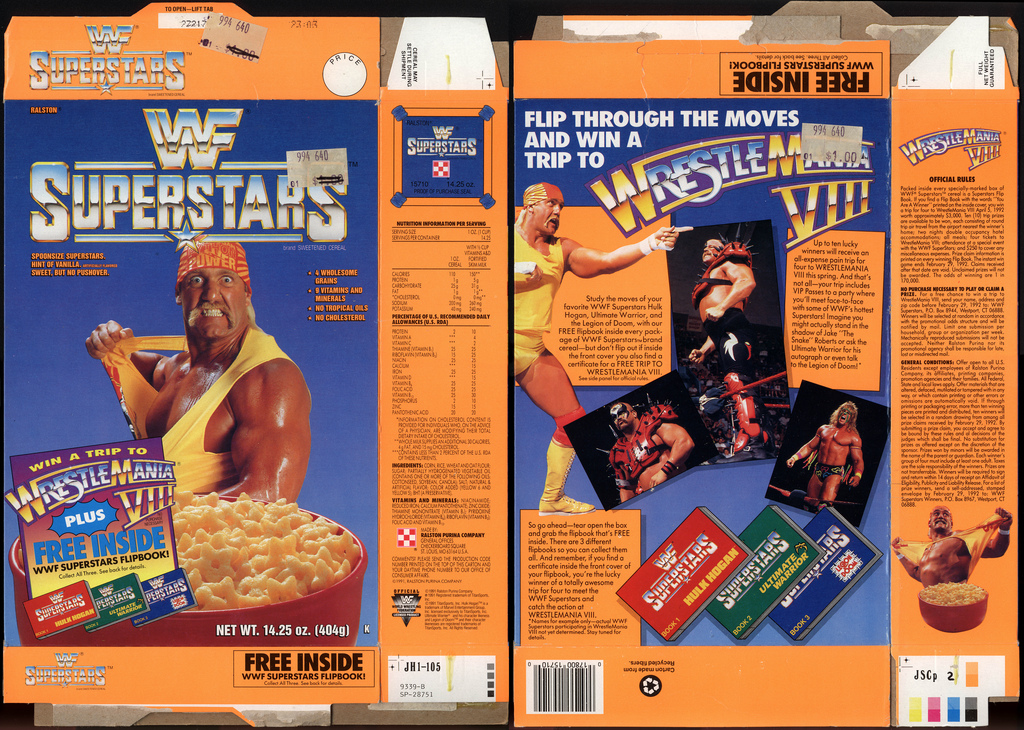 I’ve always thought that cereal box was fun (especially with Hulk Hogan gracing the front of the box) but it is the rarely-seen WWF SuperStars candy bar wrappers that are the focus of today’s post, so let’s get to them.

The bars themselves appeared to have been pretty standard fare, with a plain chocolate bar as well as a chocolate and peanuts offering.   The description on the wrappers lead me to believe that images of the wrestlers themselves were molded into the chocolate, though I can’t be sure.   Each wrapper featured small illustrations of three different wrestlers, as you can see here: 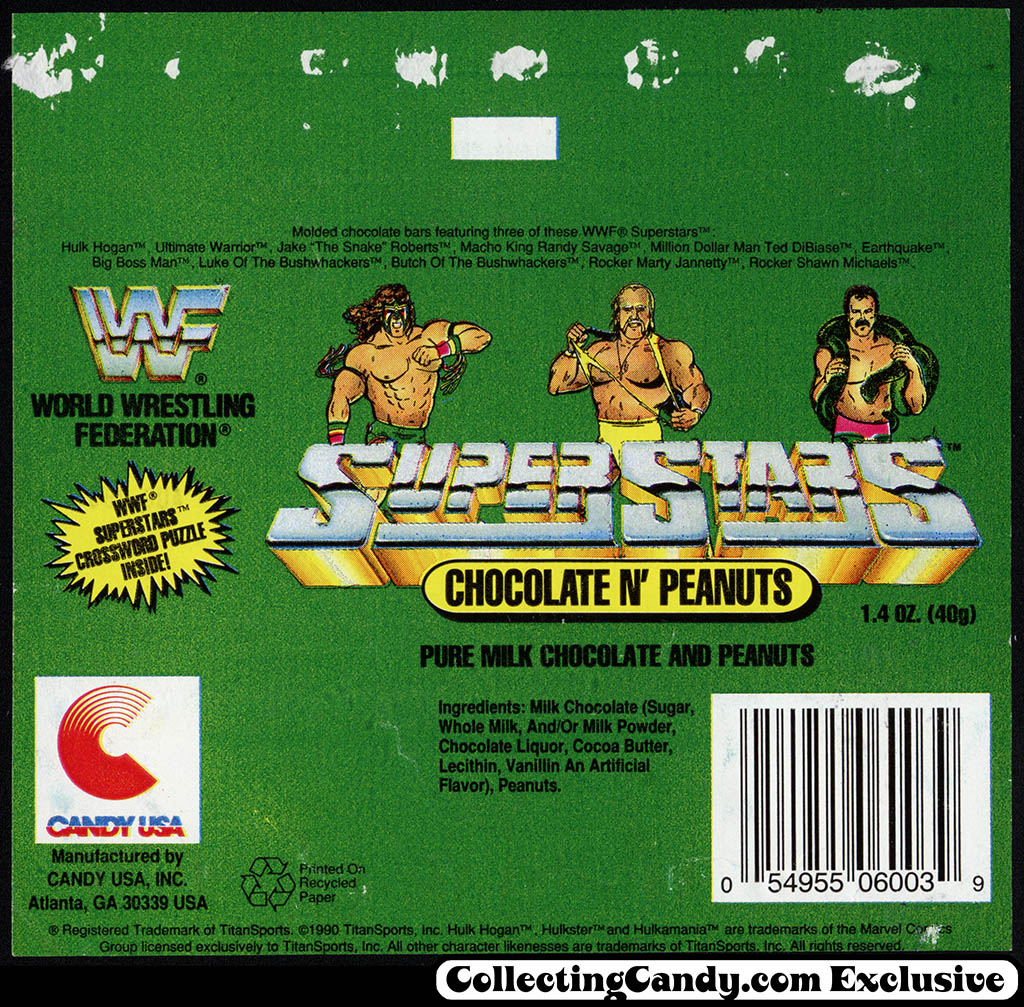 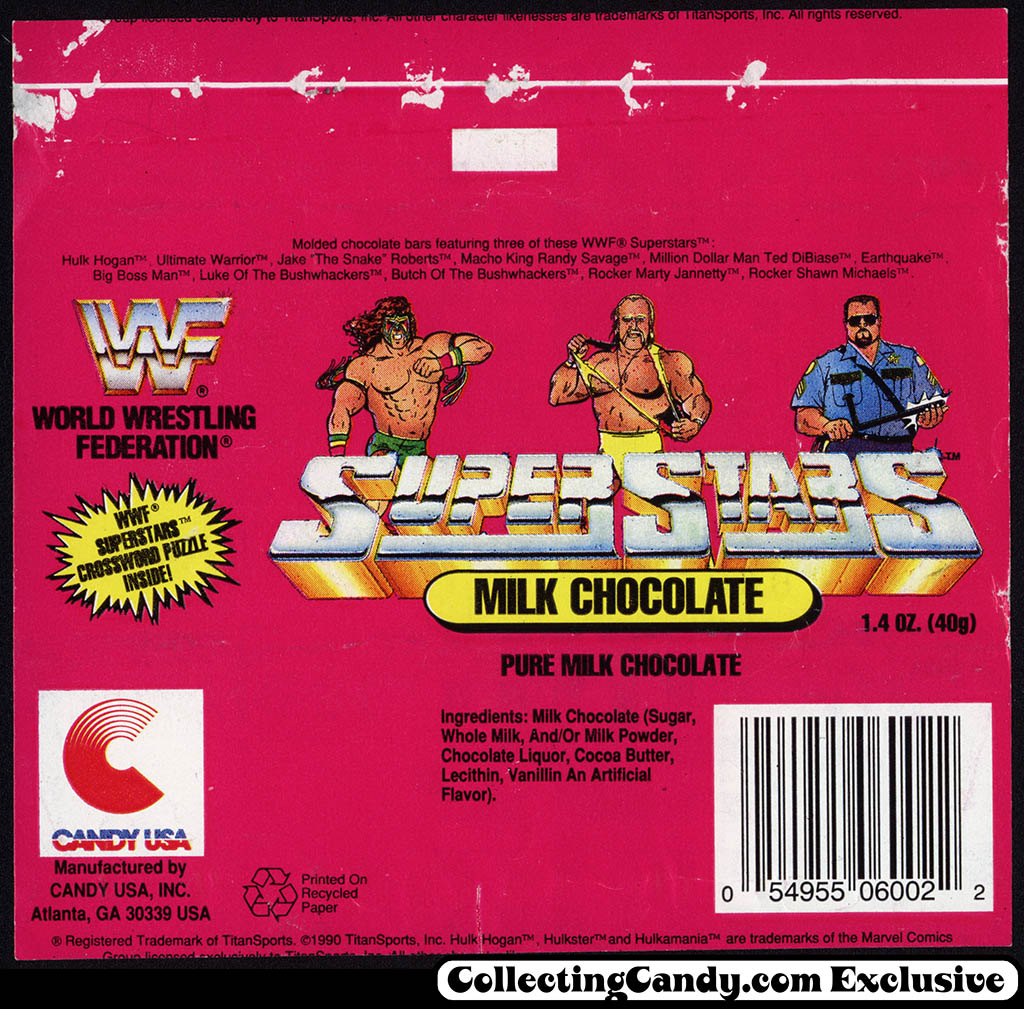 The backs of these wrappers sported a crossword puzzle, though I don’t think there was any kind of variety.  These wrapper backs shared the same repeating pattern, so it’s likely there was only ever this single crossword created for the brand.  Here it is: 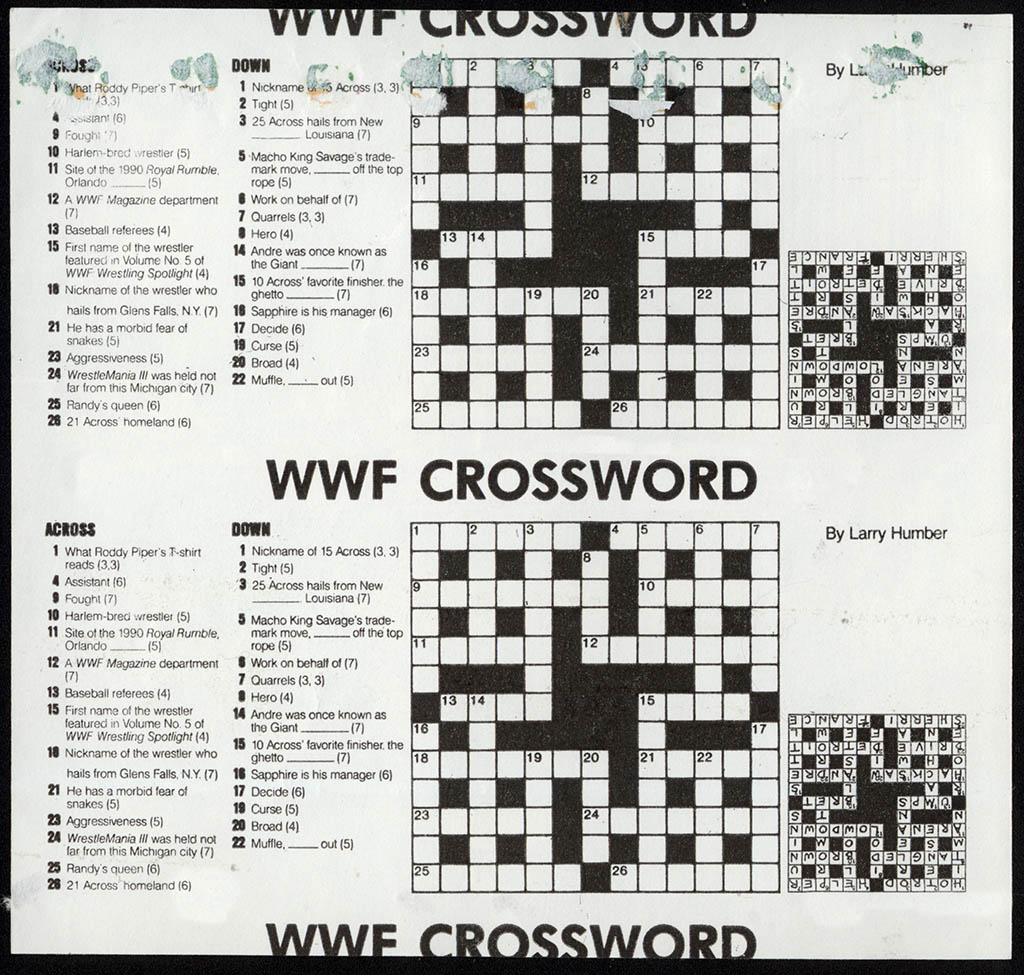 And that’s our look at the candy bar wrappers that were given life by the WWF craze of the early 1990’s.  It’s pretty fun stuff, and I think wrestling fans would agree that this era was a pretty special time for the sport.

That’s all for today.  See you next time!

A New York City based writer, editor and sometimes actor. After spending much of the 1990′s in the comic book business helping tell the stories of Marvel Comics’ X-Men as series editor, he has since split his time between developing his own entertainment properties while still consulting and working on others. Having been described as “the Indiana Jones of lost and forgotten candy”, Jason is one of the country’s premier candy collectors and historians with his discoveries appearing in countless blogs, magazines, newspaper articles, and books. Always happy to share his knowledge and unique perspectives on this colorful part of our popular culture, Jason has consulted with New York’s Museum of Food and Drink and has also been a featured guest on Food Network’s Heavyweights, France’s M6 Capital, and New York’s TheActionRoom.com. My Google Profile+
View all posts by Jason Liebig →
This entry was posted in 1990's, Chocolate and tagged candy collecting, candy collection, candy collector, candy wrapper collection, candy wrapper collector, collectible, collecting candy, confectionery, confections, Hulk Hogan, licensed, packaging, pro wrestling, sweets, vintage candy wrapper, World Wrestling Federation, wrapper, wrestling, WWF. Bookmark the permalink.

4 Responses to WWF Superstars Wrappers from 1991!