Though M&M’s have given us a number of special edition Autumn flavors over the years, the last time we got a legitimately Halloween-themed flavor was with the introduction of Candy Corn-flavored M&M’s.  This year that changed with M&M’s White BOO-terscotch.  Make the jump to check them out!

I first heard about these Target-exclusive Halloween-themed butterscotch-flavored M&M’s some months ago, and I was immediately intrigued and looked forward to trying them as I’m a big butterscotch fan.

As the months rolled on into August, I would soon hear rumors that even though these were to be a Target exclusive, the M&M’s store in Times Square had received early preview shipments of them.  So with the determination to get these as early as possible, I made the trek through throngs of midtown-Manhattan tourists to find out if it was true.  Sadly, it was not.

But finally a couple of weeks later, at the end of August, I stopped into my local Target and discovered them in an Autumn-themed display at the end of a frozen foods isle. 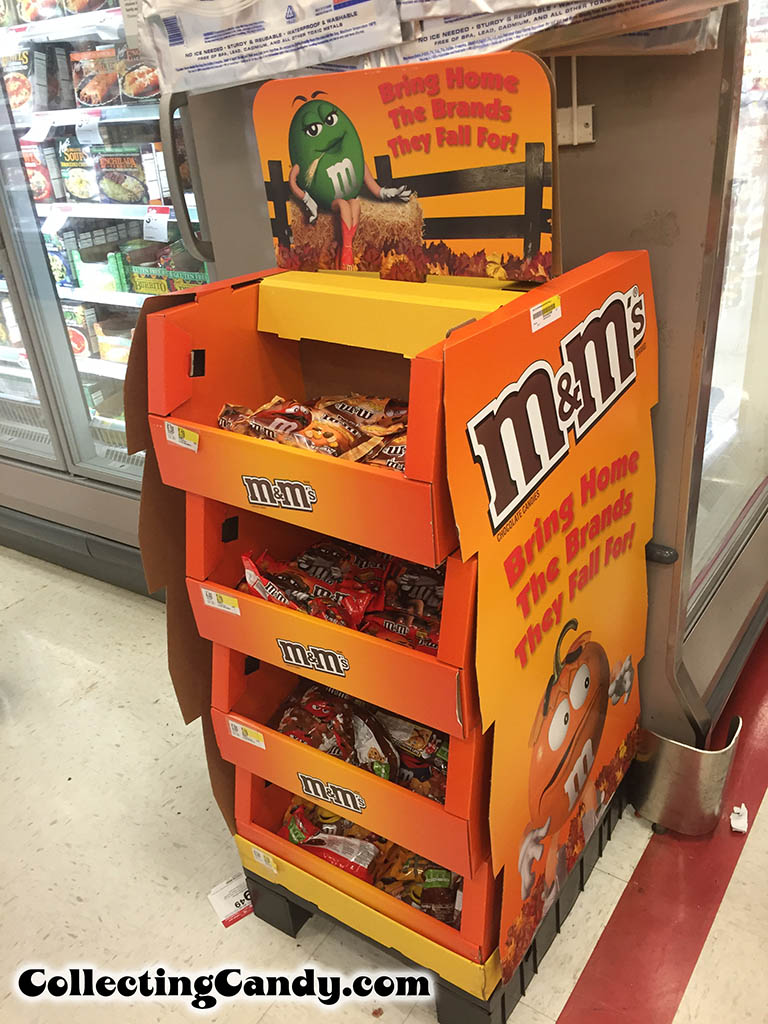 Although it would be weeks before Target would bring out their full Halloween section, I’d finally scored one of their more exciting exclusive offerings, and they did not disappoint. 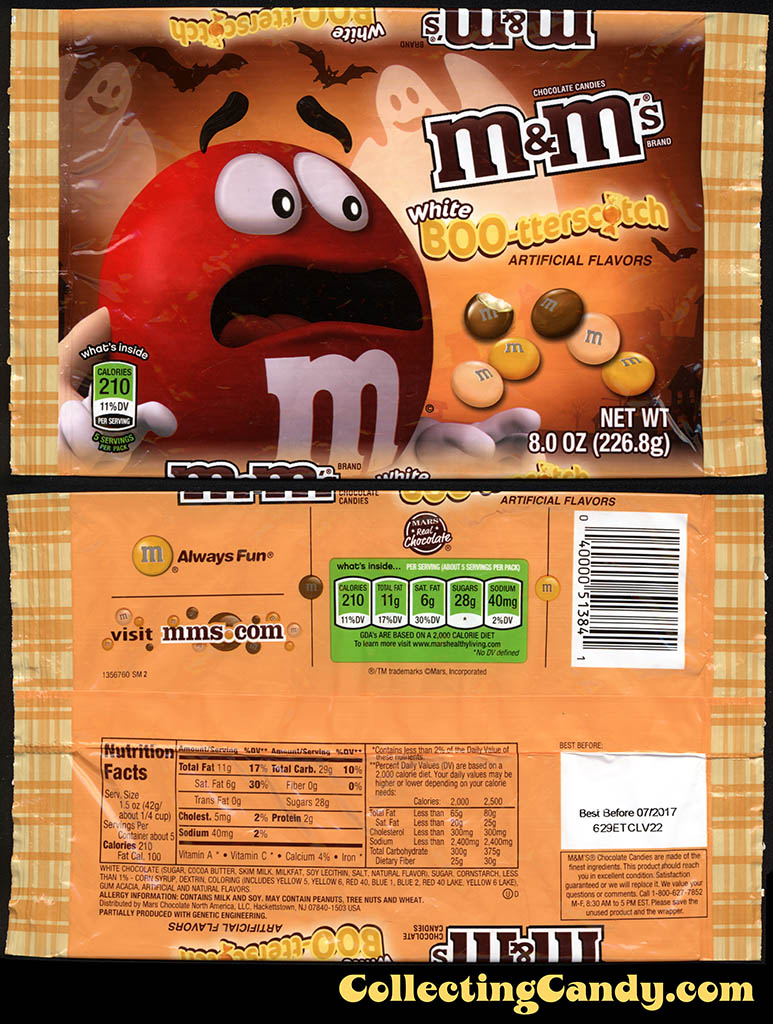 As a fan of many of the white chocolate-based M&M’s flavors that have been released in recent years as well as a big fan of butterscotch-flavored candy in general, these were (and are) an instant hit for my taste buds.  Beyond that, the package graphics invoke a kind of cool retro horror film movie poster style, making it a stand-out offering for this year’s Halloween candy packaging.  So for me, White BOO-terscotch M&M’s are a big win and one that hints that the sky is the limit for future exotic M&M’s special edition flavors.

And that’s everything I’ve got on the new 2016 Target-exclusive Halloween White BOO-terscotch M&M’s.  See you next time! 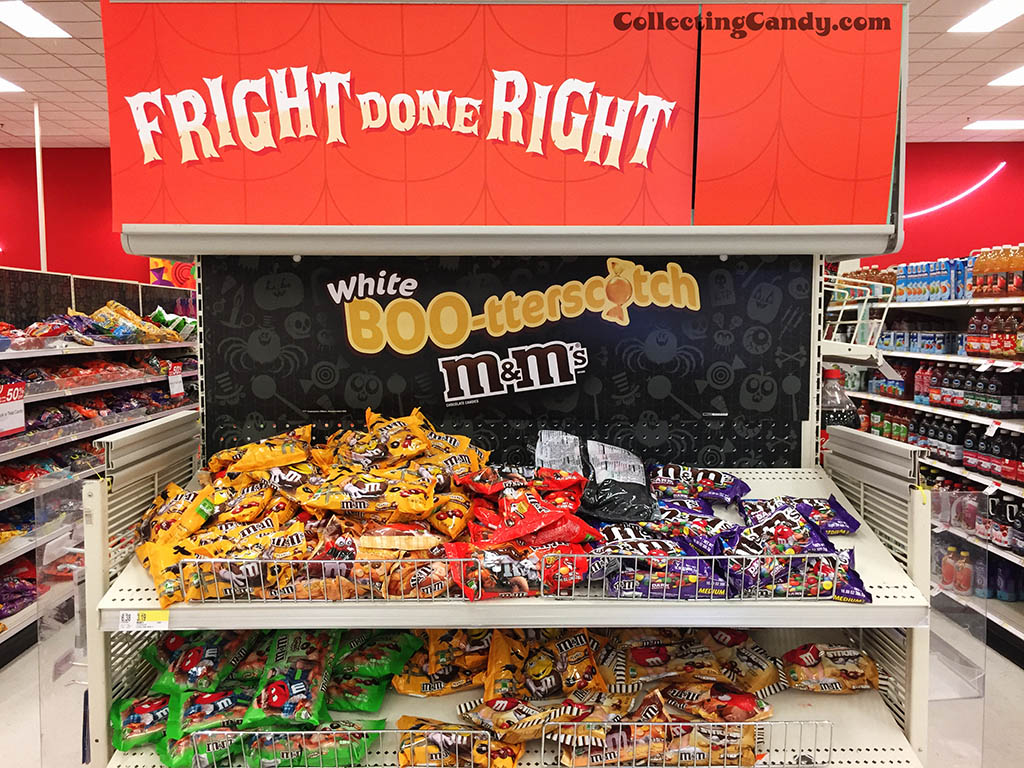 A New York City based writer, editor and sometimes actor. After spending much of the 1990′s in the comic book business helping tell the stories of Marvel Comics’ X-Men as series editor, he has since split his time between developing his own entertainment properties while still consulting and working on others. Having been described as “the Indiana Jones of lost and forgotten candy”, Jason is one of the country’s premier candy collectors and historians with his discoveries appearing in countless blogs, magazines, newspaper articles, and books. Always happy to share his knowledge and unique perspectives on this colorful part of our popular culture, Jason has consulted with New York’s Museum of Food and Drink and has also been a featured guest on Food Network’s Heavyweights, France’s M6 Capital, and New York’s TheActionRoom.com. My Google Profile+
View all posts by Jason Liebig →
This entry was posted in CountdownToHalloween, Halloween, Holiday, M&M's, Mars and tagged candy collecting, candy collection, candy collector, candy wrapper collection, candy wrapper collector, collectible, collecting candy, confectionery, confections, exclusive, Halloween, M&M, M&M's, packaging, packaging design, sweets, Target, vintage candy wrappers, wrapper. Bookmark the permalink.