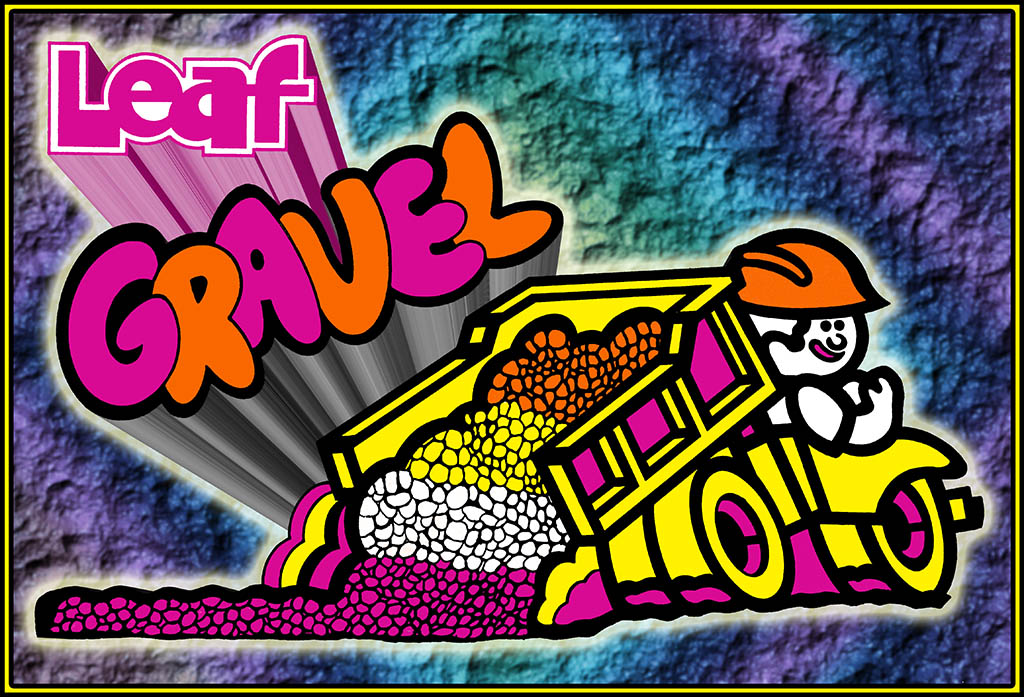 Following up on yesterday’s Mad Rocks post, I thought it would be fun to feature another one of the pebble-style bubblegum products to come out of the 1970’s; Leaf’s Gravel Gum.  Make the jump to check it out!

Leaf’s Gravel Bubblegum was first introduced to the marketplace way back in 1975, and was announced to the trade in this small clipping:

Gravel Gum must have been somewhat of a success, because it remained on shelves through the end of the decade.  I’m fortunate to have a couple of different examples of the packages offered during that period. 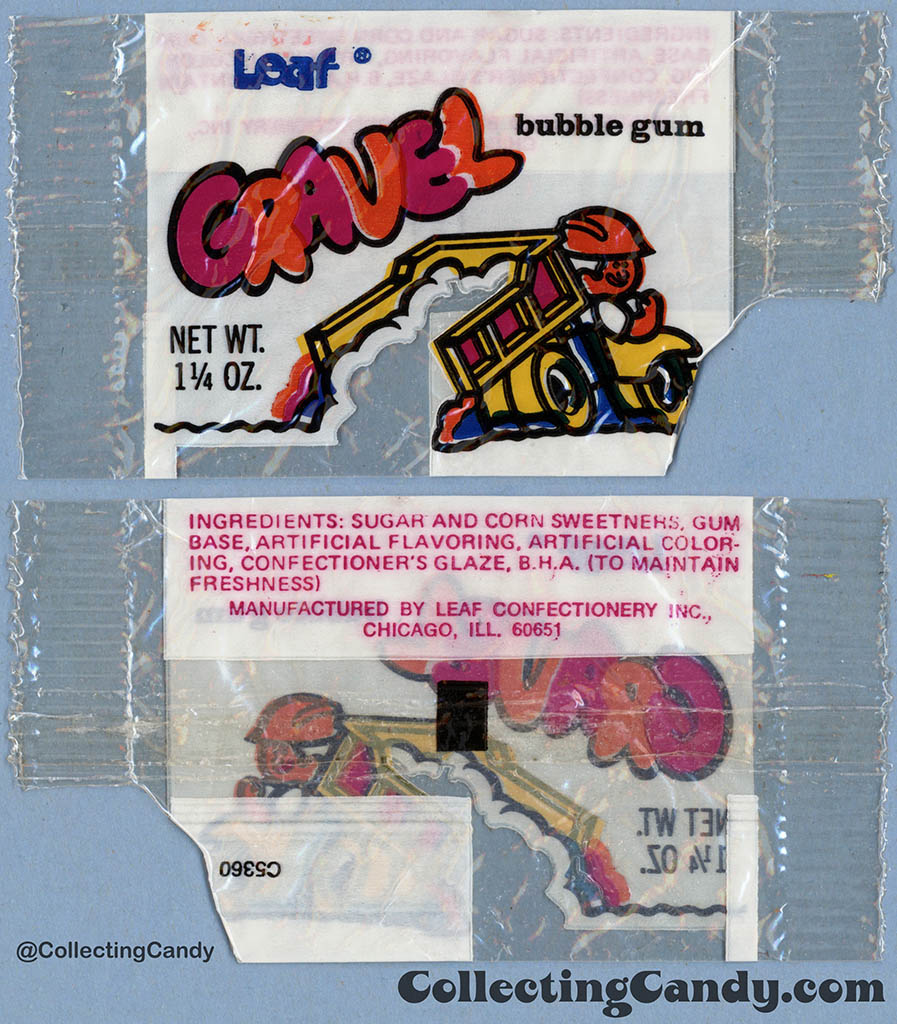 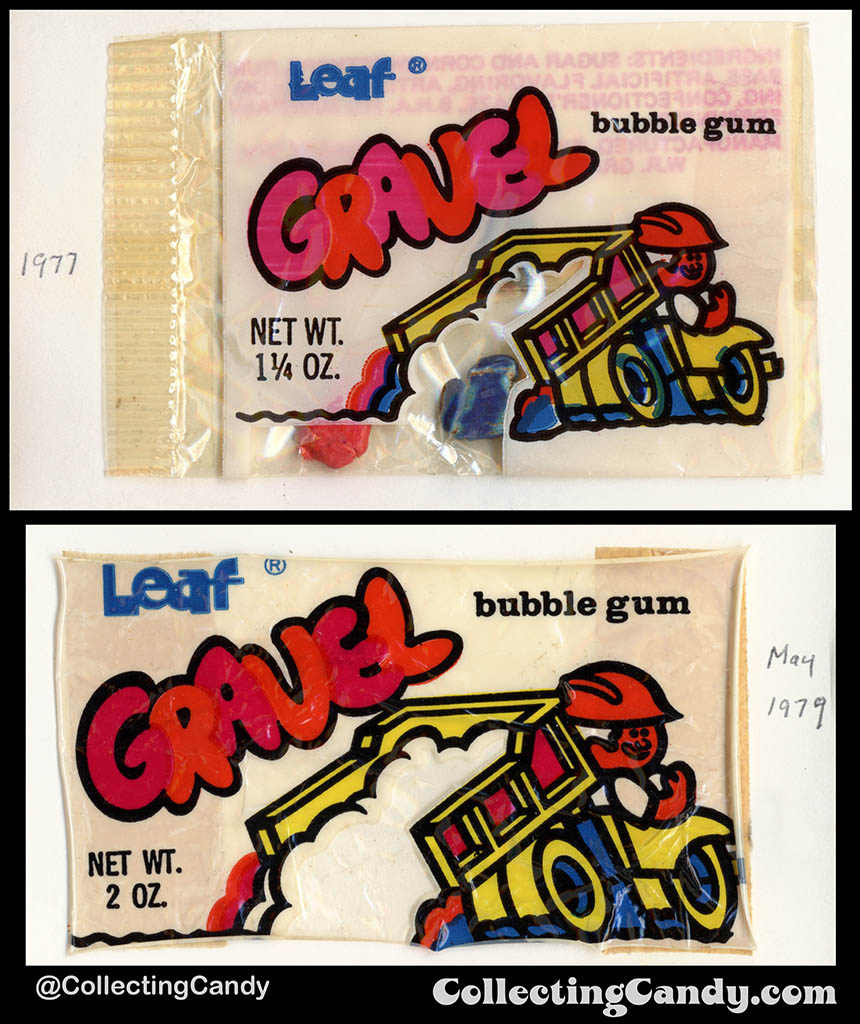 As you can see, aside from increasing the size from 1 1/4 oz packs to a 2 oz variety, not much changed in how Gravel Gum was presented to consumers.  This is definitely a product I remember well, even if I was more partial to Topps’ Gold Rush at the time.

Beyond these vintage wrappers, I’m excited to share photographs of a special piece I added to my collection about a year ago – a full display box of Leaf’s Gravel Gum from 1976.  You can get a much better idea of the actual product from these photos.   Check ’em out! 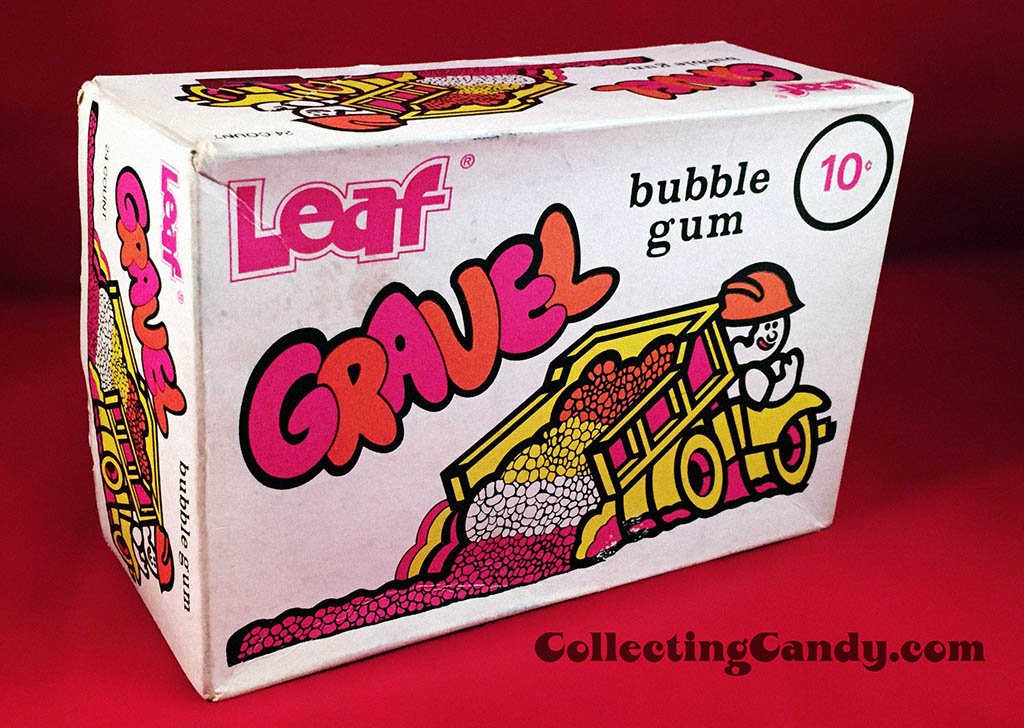 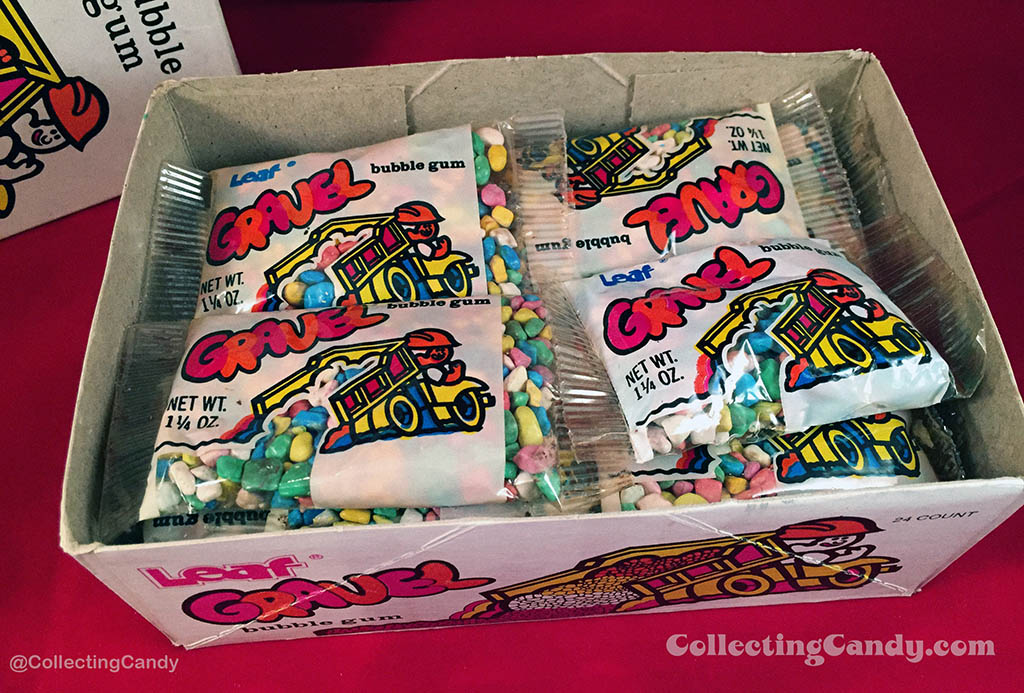 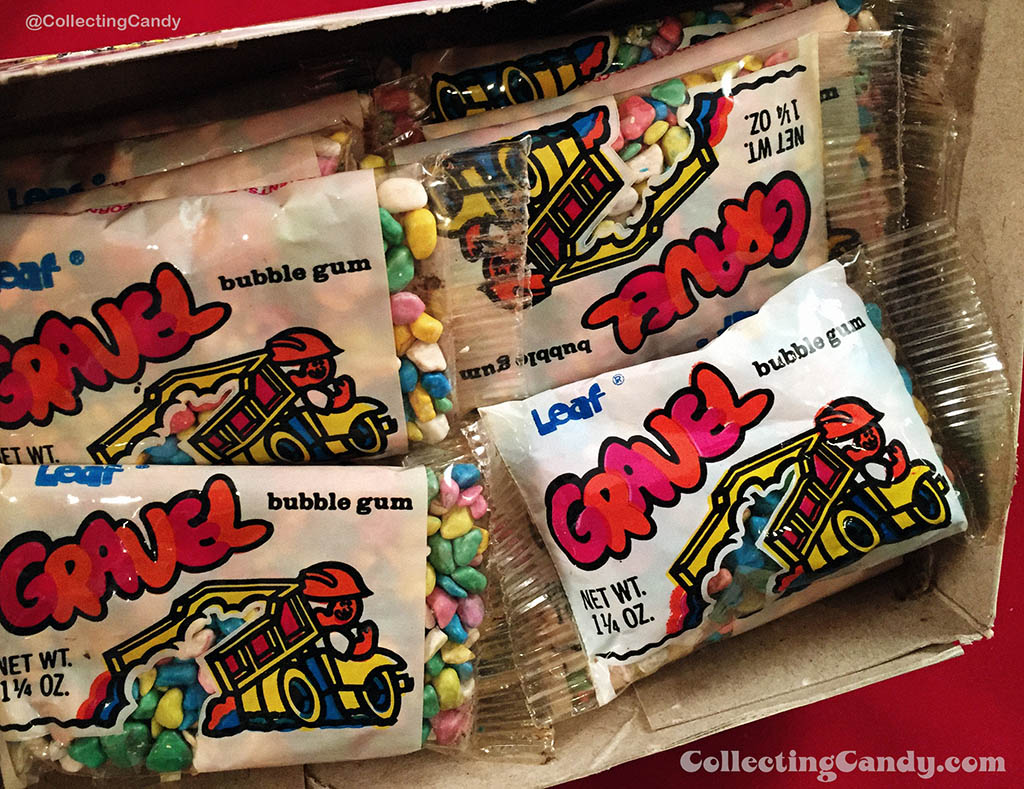 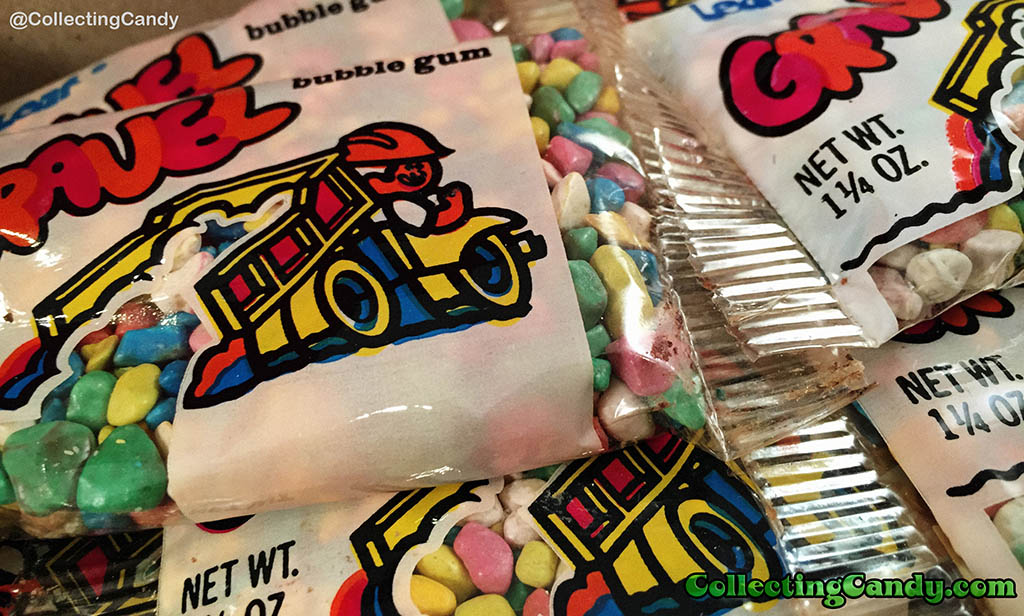 Pretty neat stuff, and a rare treat to encounter an intact display box like this – I’ve never come across another.

By the early 1980’s Leaf’s Gravel Gum appears to have been retired as I have not found evidence of it past 1979.  Perhaps the novelty of bubblegum shaped like gravel lost favor with the kid-consumers of the time.  Or perhaps a changing of the guard (and corporate ownership of Leaf) meant that product lines were being shifted and re-evaluated using long-forgotten metrics.  Whatever the case may be, I’m happy that I finally get to share a look at this memorable and fun product with you.

And that’s everything I’ve got on Leaf’s Gravel Bubblegum.  See you next time! 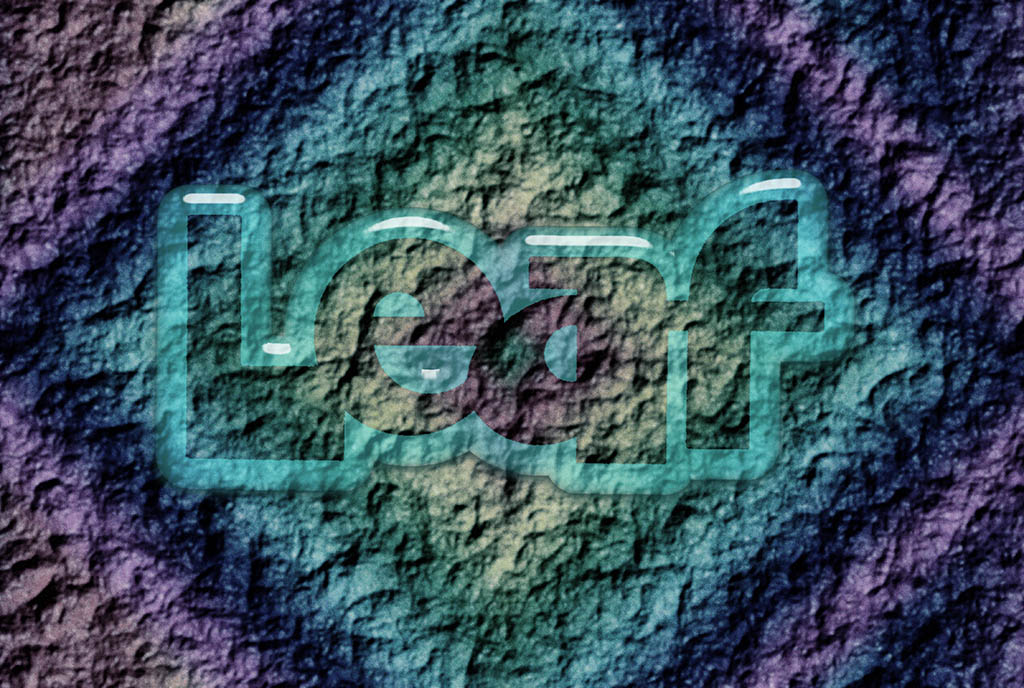 A New York City based writer, editor and sometimes actor. After spending much of the 1990′s in the comic book business helping tell the stories of Marvel Comics’ X-Men as series editor, he has since split his time between developing his own entertainment properties while still consulting and working on others. Having been described as “the Indiana Jones of lost and forgotten candy”, Jason is one of the country’s premier candy collectors and historians with his discoveries appearing in countless blogs, magazines, newspaper articles, and books. Always happy to share his knowledge and unique perspectives on this colorful part of our popular culture, Jason has consulted with New York’s Museum of Food and Drink and has also been a featured guest on Food Network’s Heavyweights, France’s M6 Capital, and New York’s TheActionRoom.com. My Google Profile+
View all posts by Jason Liebig →
This entry was posted in 1970's, Bubble Gum, Gum and tagged bubblegum, candy collecting, candy collection, candy collector, candy wrapper collection, candy wrapper collector, collectible, collecting candy, confectionery, confections, Gold Rush, gum, Leaf, Leaf Brands, novelty, packaging, packaging design, sweets, vintage candy wrappers, wrapper. Bookmark the permalink.