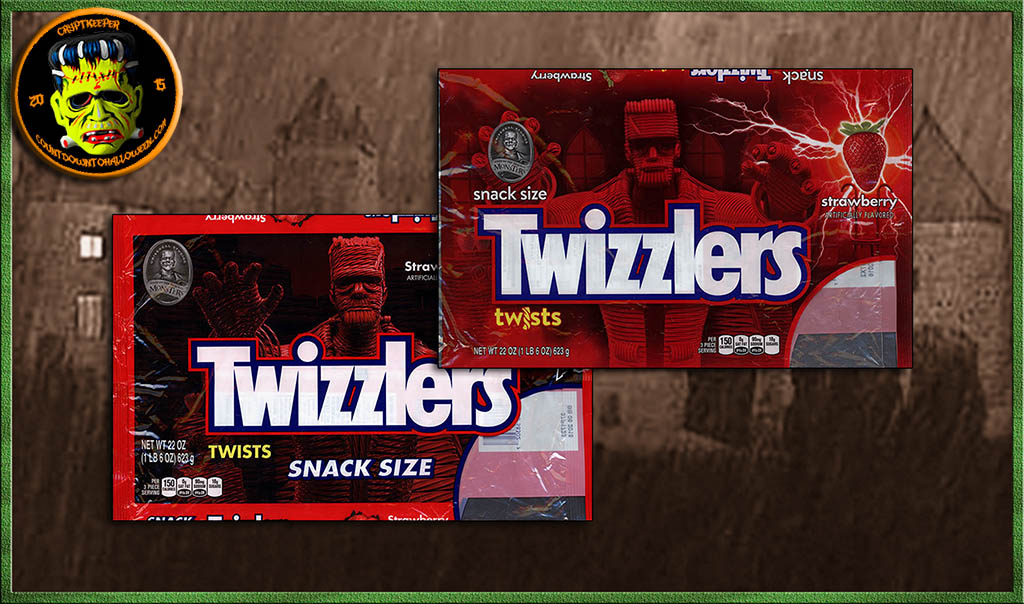 It should come as no surprise that when you run a website called CollectingCandy.com, you spend a lot of time exploring and studying the contents of the candy isle.  Do that long enough and you start to pick up on even subtle packaging design changes, even if you don’t realize immediately just what those changes might be.

Such was the case when I saw the return of one of my favorite new releases from last year, the Frankenstein’s Monster Halloween packaging for Twizzlers Twists.  At first glance it looked the same as last year but after a moment it seemed somehow not-the-same.  Turns out, in its return this year the Twizzlers Halloween Frankenstein packaging got a significant visual overhaul.  Make the jump to check it out!

I was delighted when I discovered the Frankenstein Twizzlers packaging last year because its one of those thing you don’t really expect to see, but the “Twizzlerized” version of Universal’s Frankenstein’s Monster was a real work of art.  Because of that, I was particularly shocked to find them create a completely new rendering/illustration of a Twizzlerized Frank for this year.  And while it’s not the same as last year, it’s still pretty awesome: 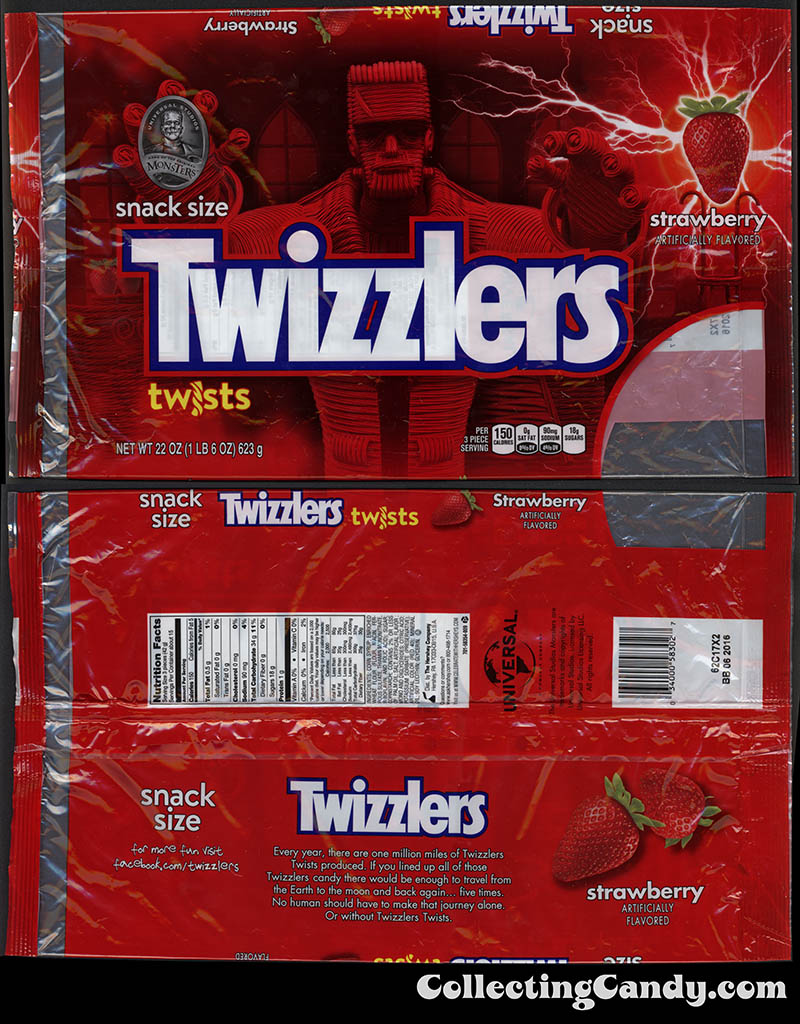 The Twizzlerized Frankenstein concept must have proven popular because it also made its way onto the smaller 16oz Halloween packages in 2015: 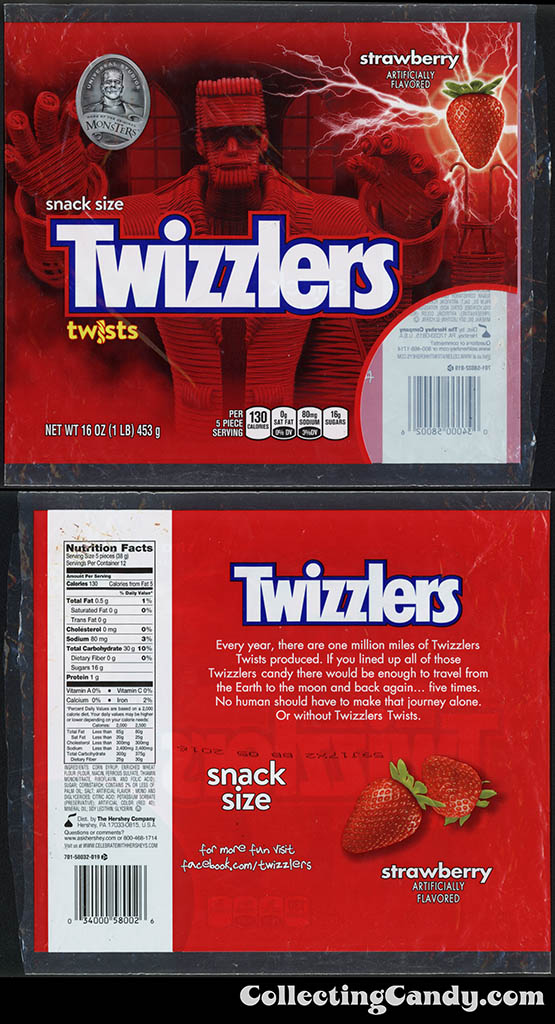 For a direct comparison to what came before, here’s a look at 2014’s Frankenstein Twizzler package contrasted with the one that rolled out for 2015: 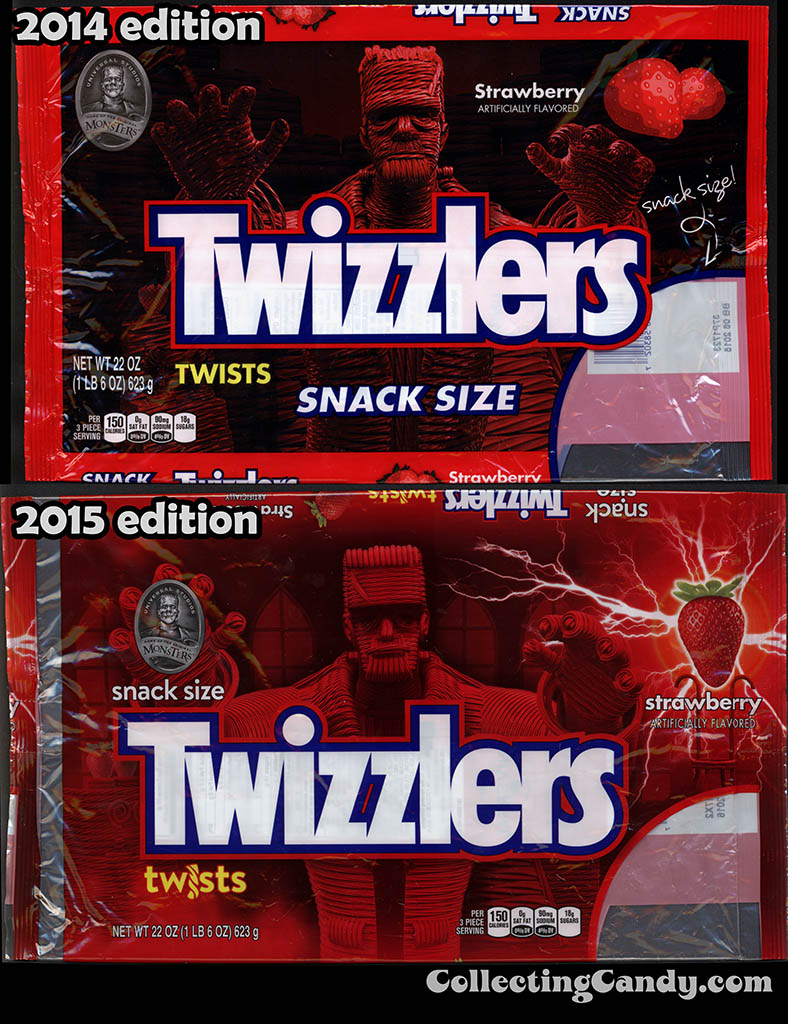 As you can see, this isn’t just a shading or small layout change.  They created a whole new version of the Twizzlerized Frankenstein character.  The 2015 version is definitely brighter, less in-the-shadows and to my eye seems a little more “cartoony”.  I still dig the new version but I’d be interested to know what the thinking was behind the visual evolution.

[Edit:  I just found the Twizzlerized Frankenstein tv-spot!  Check it out.]

We also got a new version of Twizzlers Caramel Apple Filled Twists packaging this year that is a total visual overhaul from last years version.  Here’s the new one: 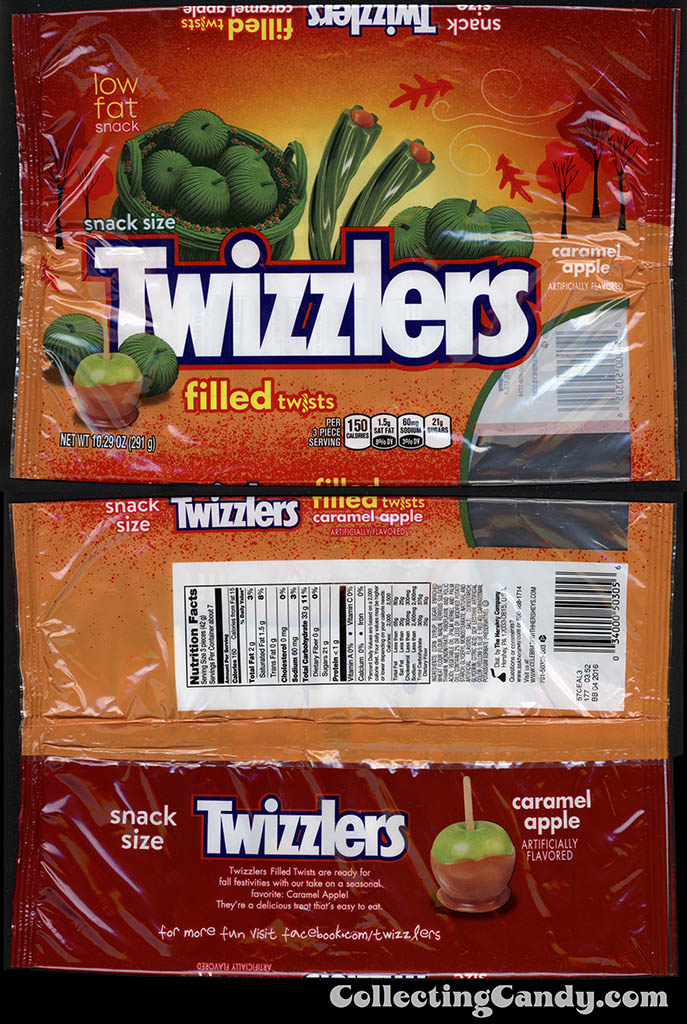 And here’s a comparison image of last years version along with the new one: 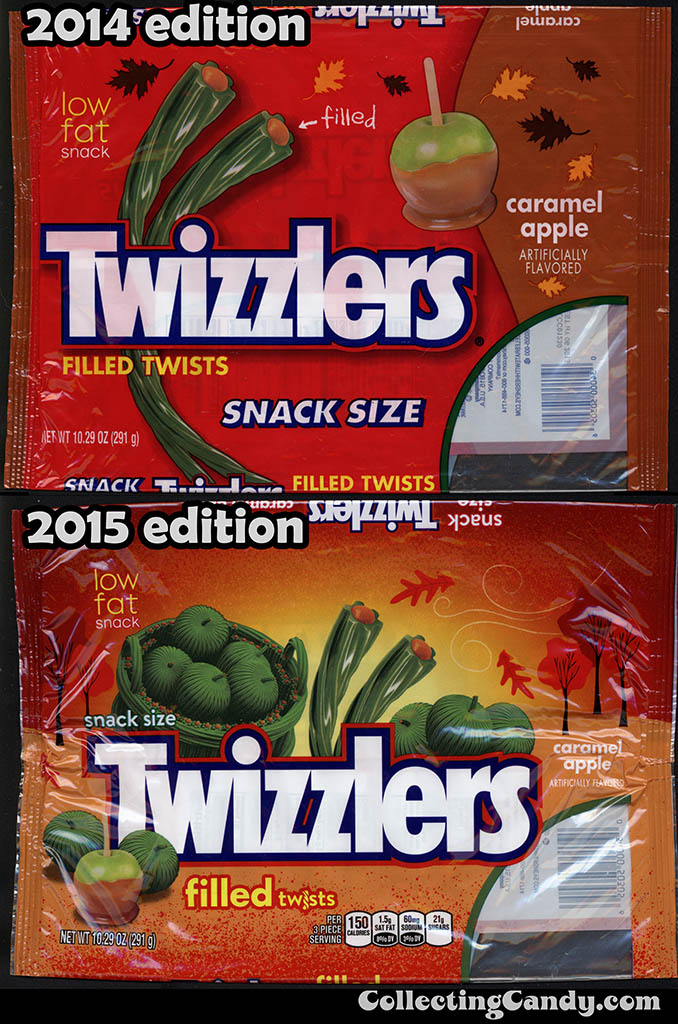 That’s a pretty significant change and one that really embraces the “Twizzlerize” visual look along with a more vibrant packaging look overall.

It goes to show you that the world of confectionery packaging can be pretty interesting and in some cases rapidly evolving.  Packaging redesigns like this are one of the factors that first captured my imagination and got me looking into the world of candy, so I always have fun spotting and documenting these types of overhauls.

And that’s everything I’ve got to share on Twizzler’s Halloween Frankenstein Redesign!  See you next time!

A New York City based writer, editor and sometimes actor. After spending much of the 1990′s in the comic book business helping tell the stories of Marvel Comics’ X-Men as series editor, he has since split his time between developing his own entertainment properties while still consulting and working on others. Having been described as “the Indiana Jones of lost and forgotten candy”, Jason is one of the country’s premier candy collectors and historians with his discoveries appearing in countless blogs, magazines, newspaper articles, and books. Always happy to share his knowledge and unique perspectives on this colorful part of our popular culture, Jason has consulted with New York’s Museum of Food and Drink and has also been a featured guest on Food Network’s Heavyweights, France’s M6 Capital, and New York’s TheActionRoom.com. My Google Profile+
View all posts by Jason Liebig →
This entry was posted in CountdownToHalloween, Halloween, Hershey, Holiday and tagged candy collecting, candy collection, candy collector, candy wrapper collection, candy wrapper collector, caramel apple, collectible, collecting candy, confectionery, confections, Frankenstein, Halloween, licorice, mascot, monster, monsters, packaging, packaging design, seasonal, sweets, Twizzlerize, Twizzlers, Universal Monsters, vintage candy wrappers, wrapper. Bookmark the permalink.

1 Response to New for 2015: A Twizzlers Halloween Frankenstein Redesign!