Though I’d invoked the Twizzlers brand earlier for our Countdown month with my Twizzlers Frankenstein packaging post – I thought their new seasonal flavor warranted the repeat.  So make the jump to check-out Twizzlers limited edition Halloween release for 2014 – Caramel Apple!

Over the past few years I’ve taken a shine to the oddball and limited edition flavor releases of Twizzlers.  I’ve had a good bit of fun tracking them down and trying them, so I was delighted when I learned that the brand would be getting a new seasonal release this year with Twizzlers Caramel Apple.

At first I assumed they’d only be sold in large snack-size multi-packs as last year’s Halloween Twizzlers were – but that turned out to not be the case.  In fact, Caramel Apple Twizzlers were sold in three different size packs that I encountered.  Here are all three: 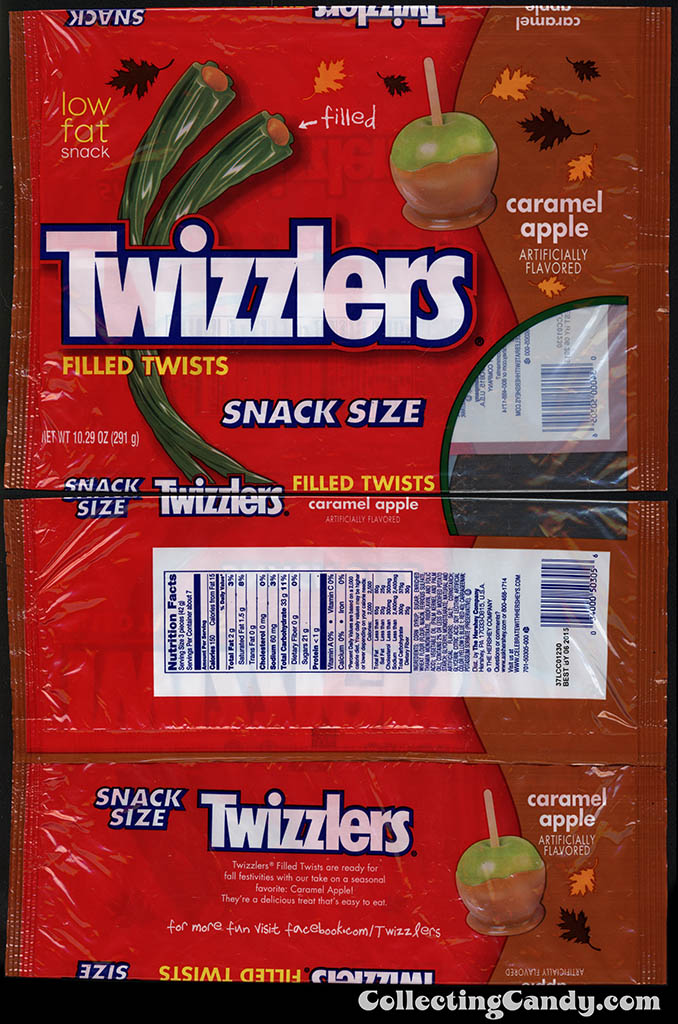 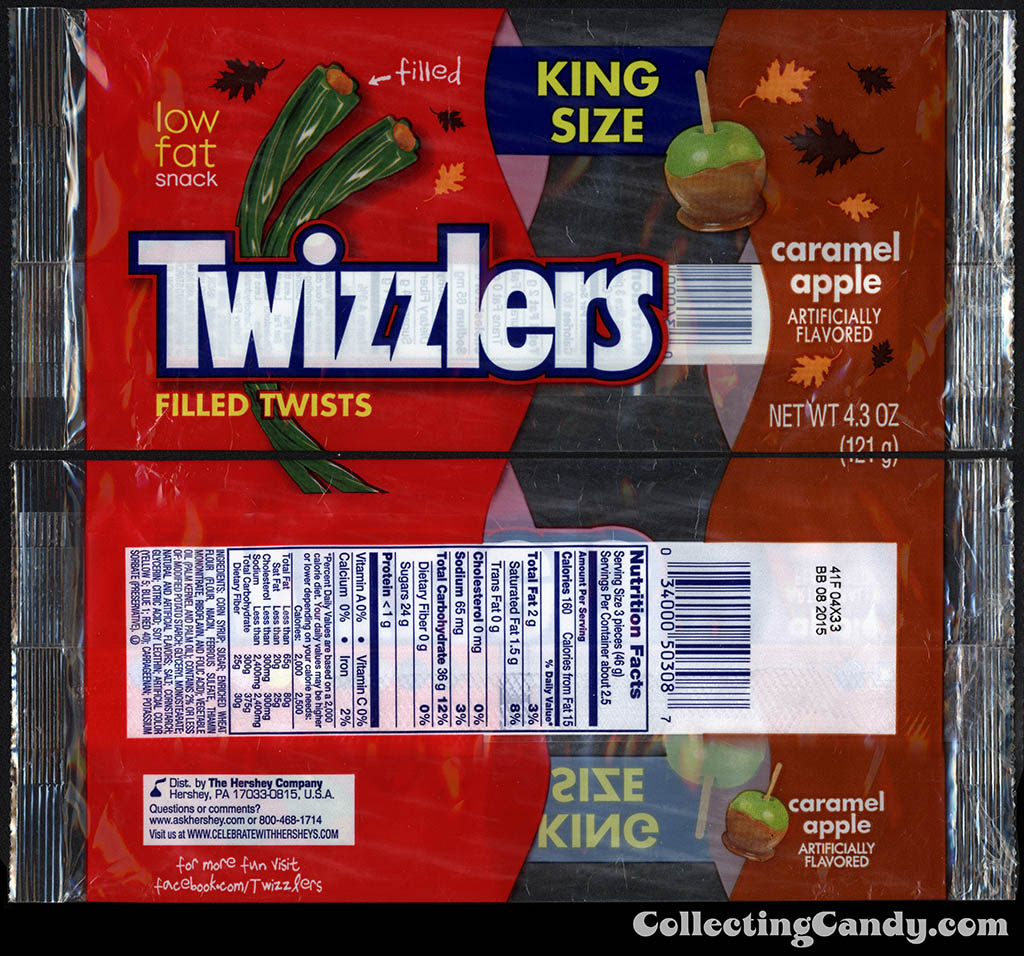 This final and smallest of the Caramel Apple Twizzlers offerings is notable as the packaging shares none of the Fall-themed details found on the larger packs.  Is it possible that this is intended to test the waters as a new all-year-round flavor? 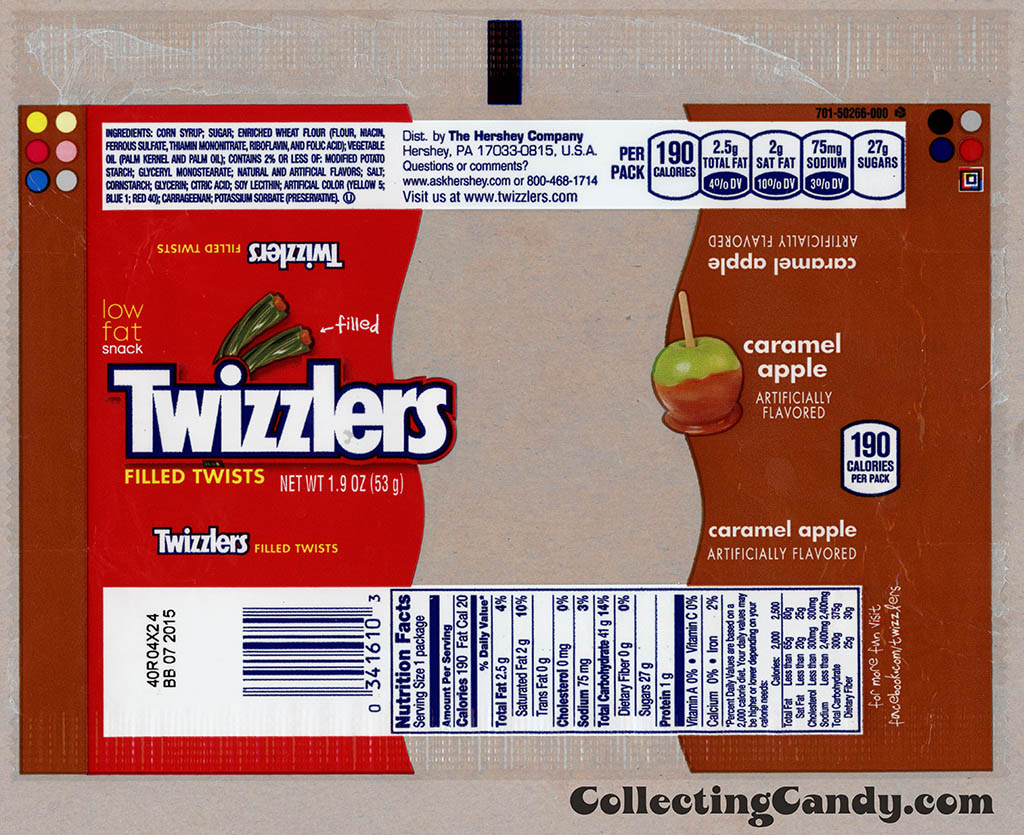 With a variety of sizes offered, it would seem that Hershey went all-in with this new seasonal flavor, as it was also sold through a number of retailers.

With Twizzlers Caramel Apple, the package design decorations emphasize the Fall nature of the package, rather than associating it too closely with just Halloween.  In contrast, last year, Twizzlers released a seasonal flavor that completely embraced the holiday with a snack-size Halloween Twizzlers in grape-and-orange flavors.  Here’s the package I saved for them (featuring a few decidedly Halloween-themed bats): 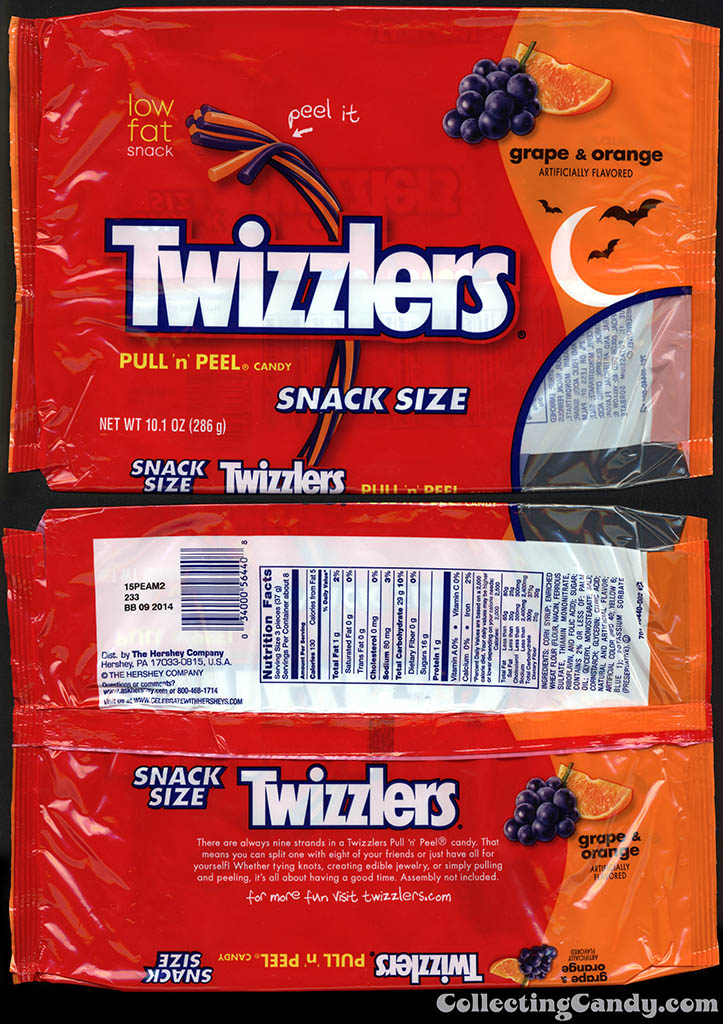 At some point soon I hope to bring together a post on all of the Twizzlers flavors I’ve picked up over the years, which are all pretty neat.  For now, that’s everything I’ve got to share on Twizzlers new Caramel Apple flavor seasonal release.

A New York City based writer, editor and sometimes actor. After spending much of the 1990′s in the comic book business helping tell the stories of Marvel Comics’ X-Men as series editor, he has since split his time between developing his own entertainment properties while still consulting and working on others. Having been described as “the Indiana Jones of lost and forgotten candy”, Jason is one of the country’s premier candy collectors and historians with his discoveries appearing in countless blogs, magazines, newspaper articles, and books. Always happy to share his knowledge and unique perspectives on this colorful part of our popular culture, Jason has consulted with New York’s Museum of Food and Drink and has also been a featured guest on Food Network’s Heavyweights, France’s M6 Capital, and New York’s TheActionRoom.com. My Google Profile+
View all posts by Jason Liebig →
This entry was posted in CountdownToHalloween, Halloween, Hershey, Holiday and tagged candy collecting, candy collection, candy collector, candy wrapper collection, candy wrapper collector, collectible, collecting candy, confectionery, confections, Halloween, Hershey, licorice, packaging, seasonal, sweets, Twizzlers, vintage candy wrapper, wrapper. Bookmark the permalink.