Hi all!  Going to be kicking off our Halloween programming at the half-way point of October this year rather than our traditional month-long coverage.  I’ll explain more on that tomorrow (Spoiler: We’re trying to launch a new bubblegum!) but today I wanted to share an exciting non-Halloween-related post before we get to the spooky stuff.

Today, I’m excited to cover the four flavor assortments of Willy Wonka’s Nerds that were released during the late 80’s “Now! Plumper” campaign, with a special emphasis on the legendary Nerds Hot and Cool flavor!

I first touched upon the Nerds “Now! Plumper” campaign in 2014 when I unveiled the first known internet image of a Nerds Hot and Cool flavor box.  The image in question came from a 1989 trade ad highlighting the significant “bulking up” of Nerds candy and here it is: 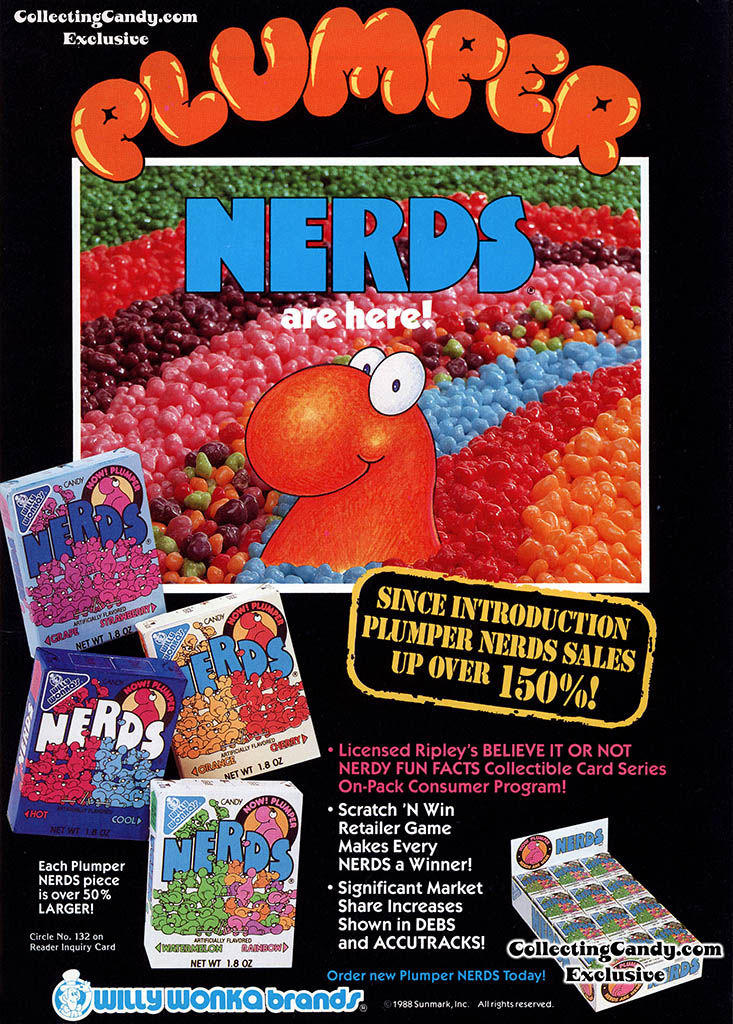 Posting that image was a significant discovery and one that I’d been on the hunt for, for years.  You see, before unveiling that first image of Nerds Hot and Cool on CollectingCandy.com, the only references to them were nostalgic mentions on internet forums – often mis-remembering their flavor description as Nerds Hot and COLD. 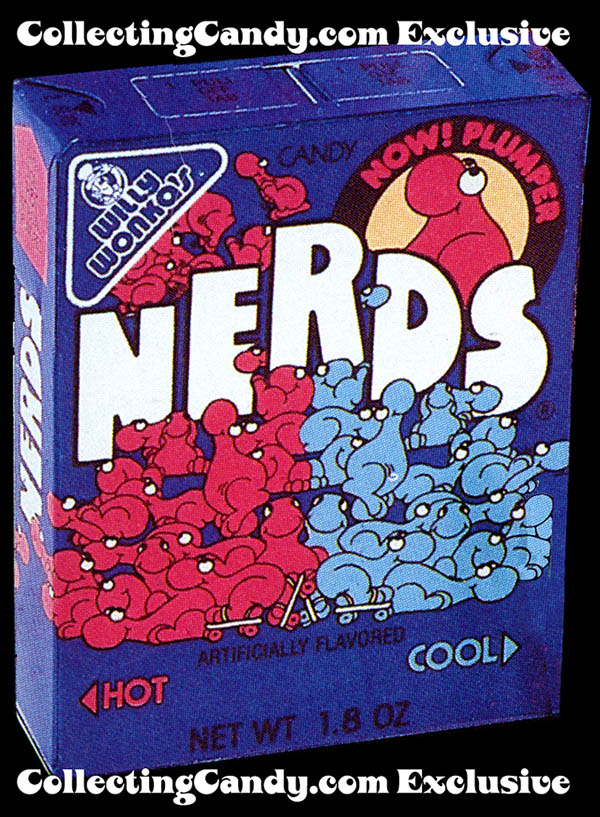 It was wonderfully satisfying to share that image with the world last year but it was merely an image and my search to find an actual Nerds Hot and Cool box continued.

Fortunately, a few months ago (after years of searching) I acquired a complete set of the Nerds boxes featured in the “Now! Plumper” campaign – including my long-sought-after candy Holy Grail; a Nerds Hot and Cool box!

Here’s the complete set of four: 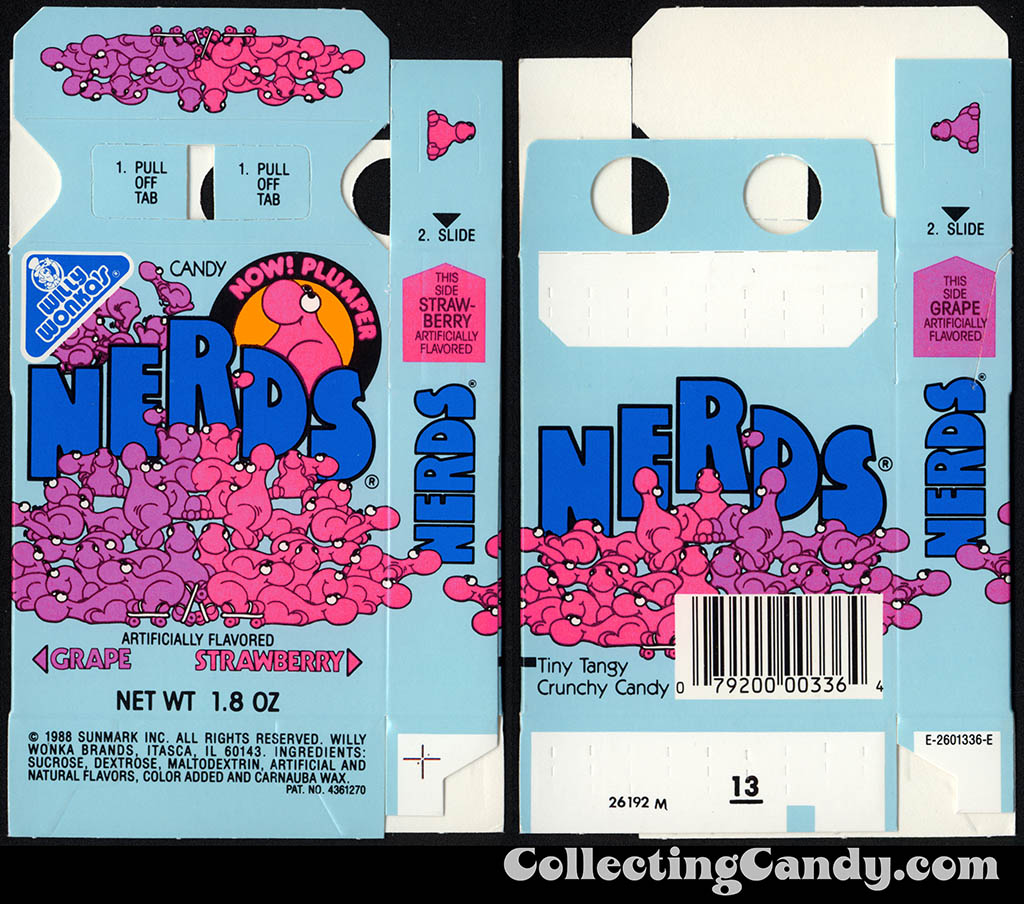 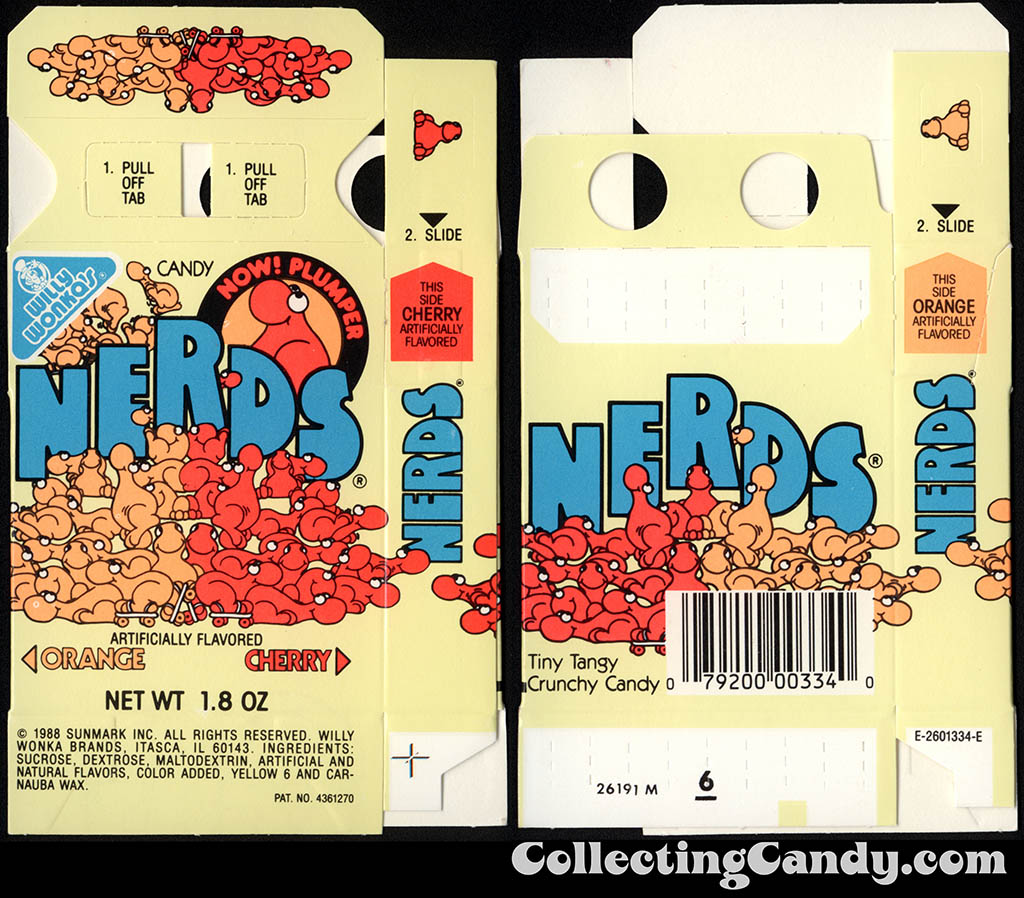 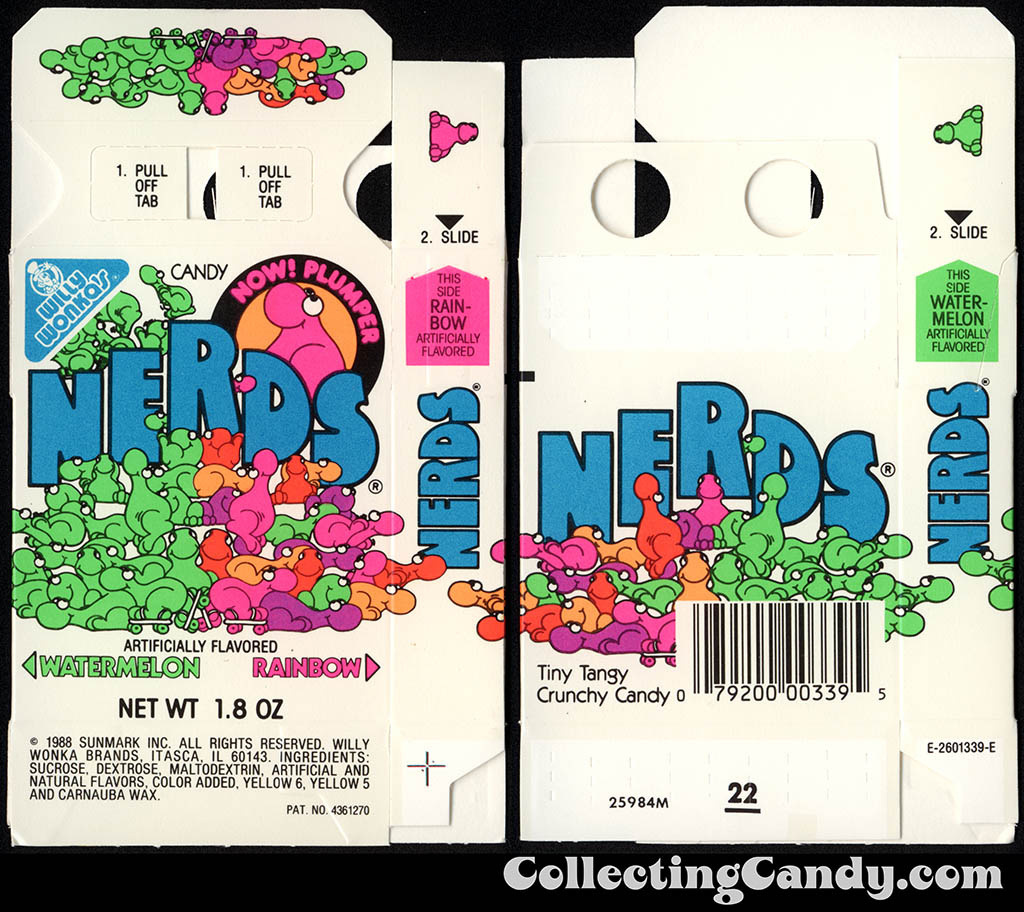 So happy to finally be able to present the set of four in all their glory here today!

As a side note: Back in 2013, before there were any known images of a Nerds Hot and Cool box, I took a stab at imagining what one might look like.  Here’s my conceptual mock-up versus the actual production box:

As a historian it’s wonderful to document and share these items and in so doing, keep them from being relegated to barely-remembered internet forum mentions.  As a collector however, there’s something extra thrilling about finally holding the physical item in your hands after years and years of hunting and speculating.   Hooray!

And that’s everything I’ve got to share on 1989’s Nerds “Now! Plumper” campaign and the no-longer-mythical Nerds Hot and Cool flavor!  See you next time!

A New York City based writer, editor and sometimes actor. After spending much of the 1990′s in the comic book business helping tell the stories of Marvel Comics’ X-Men as series editor, he has since split his time between developing his own entertainment properties while still consulting and working on others. Having been described as “the Indiana Jones of lost and forgotten candy”, Jason is one of the country’s premier candy collectors and historians with his discoveries appearing in countless blogs, magazines, newspaper articles, and books. Always happy to share his knowledge and unique perspectives on this colorful part of our popular culture, Jason has consulted with New York’s Museum of Food and Drink and has also been a featured guest on Food Network’s Heavyweights, France’s M6 Capital, and New York’s TheActionRoom.com. My Google Profile+
View all posts by Jason Liebig →
This entry was posted in 1980's, Boxed, Wonka and tagged 1980's, 1980's candy, candy collecting, candy collection, candy collector, candy wrapper collection, candy wrapper collector, collectible, collecting candy, confectionery, confections, Nerds, packaging, packaging design, sweets, vintage candy wrappers, Willy Wonka, Willy Wonka's, Wonka, wrapper. Bookmark the permalink.