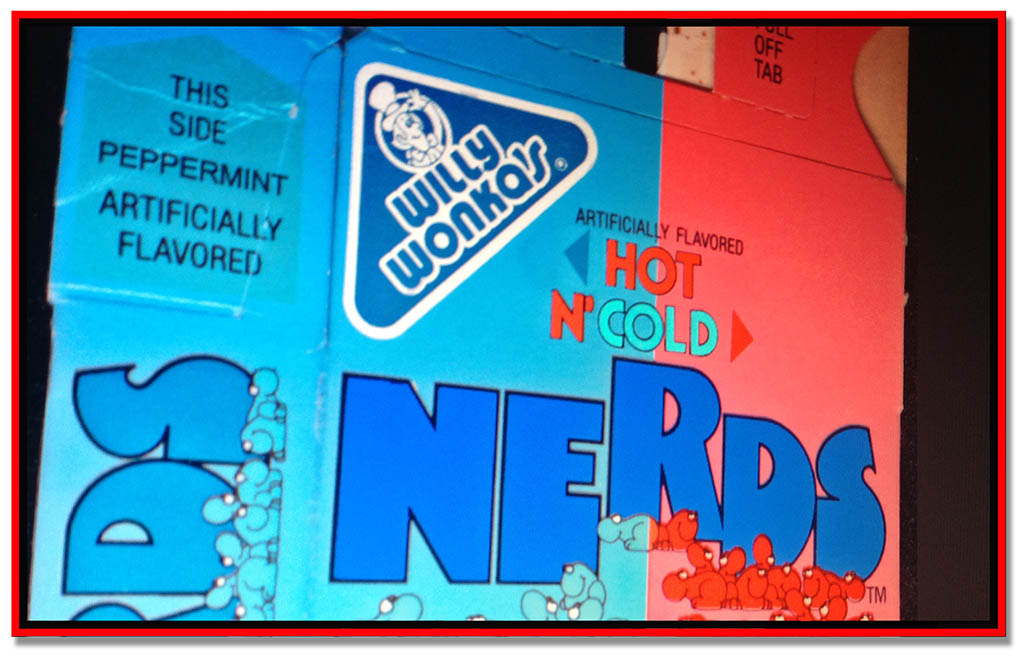 For today’s Cinnamon Hot Week entry I’m going to do something a little different and discuss a product I’ve yet to find much information on and one that remains a delicious and elusive mystery; Nerds Hot N’ Cold!

According to those that remember them, Nerds Hot N’ Cold were a hot cinnamon / cool peppermint edition of Willy Wonka’s Nerds candy released for a short time during the late 1980’s.

Typically here on CollectingCandy.com I approach a topic only after I’ve been able to dig up at least a few solid facts or images of a piece, but today I have none of that to share.  Instead, the only information I have on Nerds Hot N’ Cold are the anecdotal comments left on various websites by those that remember them fondly.

So in order to craft today’s post, I created a mock-up in Photoshop of what a Nerds Hot N’ Cold box might have looked like, using an existing 1980’s Nerds box from my collection.  Here it is: 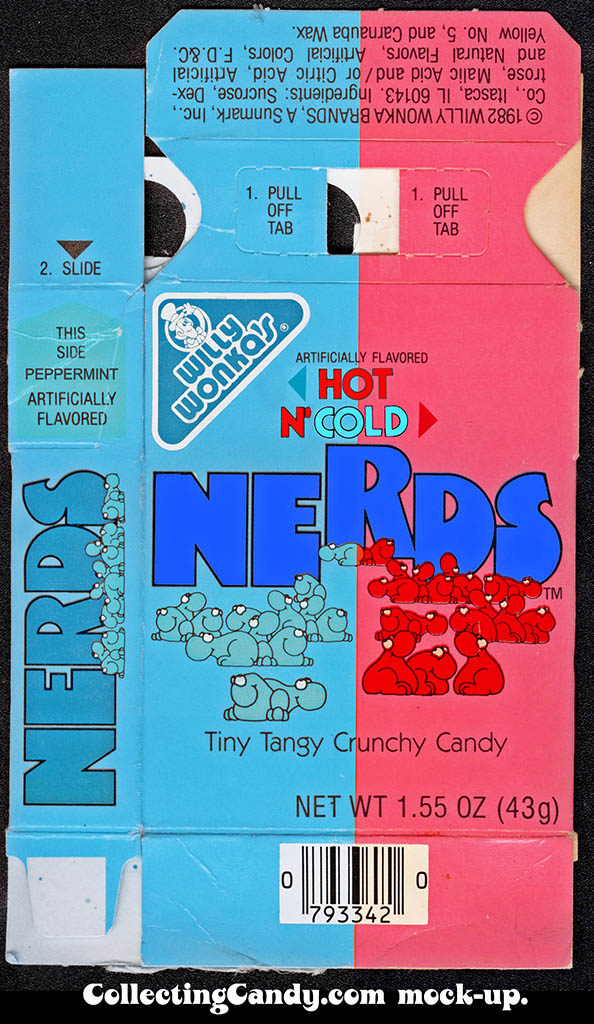 While there is no hard information and not a single actual packaging image to share today on Nerds Hot N’ Cold, I’m hoping that by including them in our Cinnamon Hot Week coverage, it might bring something new to the surface.  Perhaps today’s post will scare up additional reminiscences or a packaging photo or maybe even an actual example of a Nerds Hot N’ Cold box?  That’s my hope, anyway.

If anyone out there can help shine some light on the Nerds Hot N’ Cold mystery, please drop us a line, or leave a comment at the bottom of this post.

For today, the search for Nerds Hot N’ Cold is just beginning.

A New York City based writer, editor and sometimes actor. After spending much of the 1990′s in the comic book business helping tell the stories of Marvel Comics’ X-Men as series editor, he has since split his time between developing his own entertainment properties while still consulting and working on others. Having been described as “the Indiana Jones of lost and forgotten candy”, Jason is one of the country’s premier candy collectors and historians with his discoveries appearing in countless blogs, magazines, newspaper articles, and books. Always happy to share his knowledge and unique perspectives on this colorful part of our popular culture, Jason has consulted with New York’s Museum of Food and Drink and has also been a featured guest on Food Network’s Heavyweights, France’s M6 Capital, and New York’s TheActionRoom.com. My Google Profile+
View all posts by Jason Liebig →
This entry was posted in 1980's, Boxed, Wonka and tagged candy collecting, candy collection, candy collector, candy wrapper collection, candy wrapper collector, collectible, collecting candy, confectionery, confections, mascot, Nerds, packaging, sweets, vintage candy wrapper, Willy Wonka, Wonka, wrapper. Bookmark the permalink.