The Pre-Hershey History of Kit Kat USA: Discovered and Uncovered!

Kit Kat’s earliest days are well-recorded.  Created in the United Kingdom by the Rowntree company all the way back in 1935 as Rowntree’s Chocolate Crisp (officially branded as Kit Kat in 1937), it would eventually grow to become a worldwide confectionery phenomenon – one of the undisputed all-time great brands.  Yet the story of Kit Kat in the United States (before its acquisition by Hershey in the early 1970’s) has long been shrouded in mystery, and it’s a tale I’ve spent years working to uncover.

Recently I made an exciting discovery that clarifies a big part in the pre-Hershey history of Kit Kat in the USA.  Make the jump to check it out!

Before I get to unveiling the details of my recent Kit Kat discovery, I thought it would be helpful to lay the table by explaining how the Kit Kat brand is currently distributed worldwide, and how it got there.

As I already mentioned, the Rowntree company of England sold its first branded Kit Kat back in 1937.  I’m fortunate to have one of these early Kit Kat wrappers in my collection:

That same year, another UK chocolate manufacturer called John Mackintosh and Co. released its own classic, the Rolo.  After years of competition, the Rowntree and Mackintosh companies would merge in 1969 to form Rowntree-Mackintosh – an effort which helped both companies expand their brands globally.   Around this same time, Rowntree would make efforts to license the distribution of several of its products to solidify its reach into the United States (more on this later).  Nearly two decades later in 1988, Nestle would acquire Rowntree-Mackintosh and all its assorted brands including long-time favorites like Kit Kat, Rolo and Aero.

During Rowntree’s decades of growing the Kit Kat brand and before they would merge with Mackintosh, they would make efforts to get Kit Kat onto United States’ store shelves.  This earliest part of Kit Kat USA’s story is still hazy but I do know that at some point in the 1950’s or 1960’s Rowntree distributed the Kit Kat to stores here, as I have a wrapper from this effort.  Here’s an example of one of those earliest USA Kit Kat wrappers [Note the awesome Rowntree logo design on the back.]:

In the 1960’s, Rowntree had a New York office to handle their moves into the USA marketplace, but in 1968 they changed strategies by enlisting Phillip-Morris to handle all of their distribution in the United States.  That change included more than just the Kit Kat, as is documented in this 1968 trade clipping:

[Note:  For those that aren’t aware, Phillip-Morris is best known as the parent company of some of the largest cigarette/tobacco brands in the world.  If you’re wondering why a cigarette company might be a good place for a candy manufacturer to seek distribution with, it is the fact that in the 1960’s most candy and cigarettes were sold at mom and pop stores, and in many cases distributed and sold by the same wholesalers and salesman/jobbers.  Phillip-Morris already had the distribution network that Rowntree was seeking to get into.]

That 1968 trade clipping is something I’d had but been overlooking for the past few years, not realizing its significance in the history of the Kit Kat brand here in the USA.  That finally changed last month.

Recently I acquired a group of (mostly American) candy wrappers from the late 1960’s and early 1970’s.  Among them were what I initially thought were a pair of Canadian Kit Kat and Aero bar wrappers.  I made that initial assumption based on the Kit Kat wrapper design and the fact that the Aero bar wasn’t, to my knowledge, sold in the US at the time.

But as I looked closer I realized I was wrong and that I had uncovered something far more remarkable – this was a USA Rowntree Kit Kat wrapper from the years just before Hershey began manufacturing them for the United States region!  This is the amazing wrapper in question:

Not only that, but I learned that the Aero bar was briefly sold in the USA two decades before I thought it ever was. 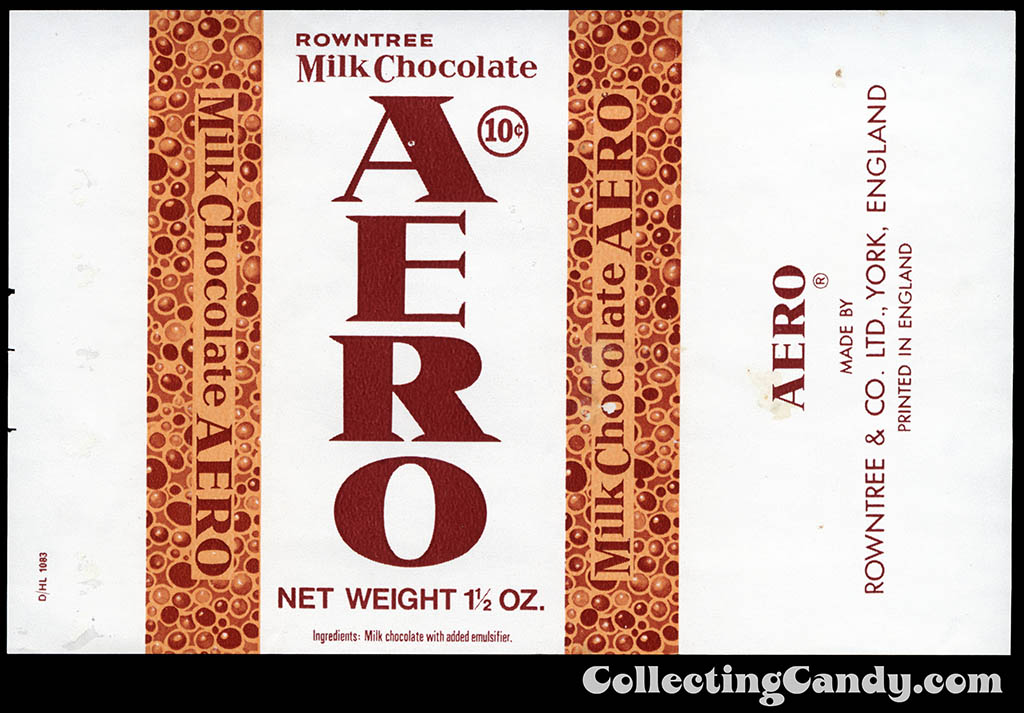 So, after years of wondering what the USA Kit Kat might have looked like in those lost and unknown years between its first release and the mid-70’s Hershey version, the mystery was finally solved.

But there’s still a bit of mystery to this Kit Kat wrapper and here it is:  It’s possible that this 10-cent USA Rowntree Kit Kat wrapper is one that was distributed by Rowntree’s own United States branch in the mid-to-late 1960’s, or it could have been sold under the Phillip-Morris distribution deal in 1968-69.  But there’s even the possibility that this wrapper went unchanged and kept the Rowntree name even when Kit Kat was initially distributed by Hershey from 1970-72.  It’s difficult to know for certain without further evidence and corroboration.   The fact that both Phillip-Morris AND Hershey had short-term distribution deals with Rowntree that didn’t include a hand in manufacturing makes any of the three scenarios possible.  Which brings me to my next discovery.

Uncovering this Kit Kat wrapper prompted me to dig through my archives for a June 1993 Hershey Chocolate Press employee newsletter; it was one that I recalled had mentioned the original Hershey Kit Kat distribution deal.  The newsletter explains that Hershey took over the US distribution of Kit Kat (from Phillip-Morris) in 1970, yet didn’t start manufacturing them domestically until a few years later in 1973. 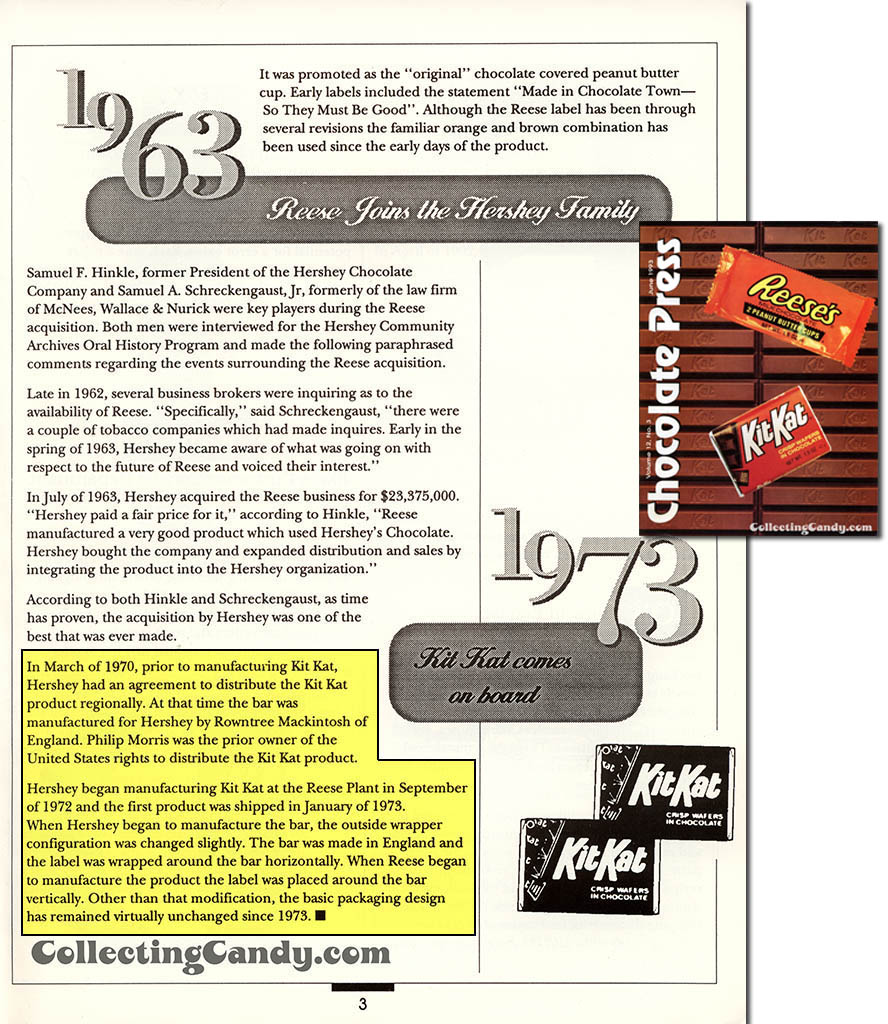 It’s quite possible that Hershey was using the Rowntree wrapper printed for US markets while they were importing the UK-manufactured Kit Kat bars.   By 1973, this would change and Hershey would introduce a USA Kit Kat wrapper design that would go largely unchanged for the next two decades.  Here’s an early one from 1977:

It’s worth noting that, …“in 1978 the Hershey contract was renegotiated, giving Hershey the rights to the Kit Kat and Rolo brands in the US in perpetuity.”   [Note: Boston-based NECCO had previously been the Rolo licensee and distributor in the United States.]  This permanent licensing agreement has turned into one of the best deals ever made for Hershey or any company, which has exclusively manufactured and distributed the Kit Kat and Rolo brands for USA markets ever since.

And that’s everything I’ve got to share on my new discoveries and insights into Kit Kat’s pre-Hershey history.  I hope you dig it and I’ll see you next time!

P.S.  I covered this discovery in a recent episode of TheCandyGeek vlog which you can check out here:

A New York City based writer, editor and sometimes actor. After spending much of the 1990′s in the comic book business helping tell the stories of Marvel Comics’ X-Men as series editor, he has since split his time between developing his own entertainment properties while still consulting and working on others. Having been described as “the Indiana Jones of lost and forgotten candy”, Jason is one of the country’s premier candy collectors and historians with his discoveries appearing in countless blogs, magazines, newspaper articles, and books. Always happy to share his knowledge and unique perspectives on this colorful part of our popular culture, Jason has consulted with New York’s Museum of Food and Drink and has also been a featured guest on Food Network’s Heavyweights, France’s M6 Capital, and New York’s TheActionRoom.com. My Google Profile+
View all posts by Jason Liebig →
This entry was posted in 1950's, 1960's, 1970's, 1980's, British, Chocolate, Hershey, Nestle and tagged candy collecting, candy collection, candy collector, candy history, candy wrapper collection, candy wrapper collector, collectible, collecting candy, confectionery, confections, Hershey, Kit Kat, packaging, packaging design, Rowntree, sweets, vintage candy wrappers, wrapper. Bookmark the permalink.

7 Responses to The Pre-Hershey History of Kit Kat USA: Discovered and Uncovered!