This weekend Marvel’s Avengers: Age of Ultron is hitting theaters in the United States, so I thought it was the perfect time to revisit some Avengers-related candy pieces from my collection.  Make the jump to check them out!

When the first Avengers film debuted in 2012, this site was only a few months old and I posted about the Hershey company tie-ins related to that movie that I had picked up.  I didn’t realize it at the time but I had completely missed the Hershey bars.  So today I’m going to look back at those missed pieces as well as a few other oddball confectionery Avengers tidbits that you won’t find anywhere else.

Before I do, I wanted to share the latest episode of TheCandyGeek, which touches upon my trip to see Avengers: Age of Ultron this very weekend.

Hershey’s “Save the Day” promotion back in 2012 was pretty fun and resulted in a lot of great Avengers candy packaging but for 2015’s Age of Ultron the companies didn’t follow suit, which I think is too bad.  I’d have loved to have seen Ultron gracing a Kit Kat wrapper this year.  At least we still have the offerings from 2012 to appreciate.  Here they are: 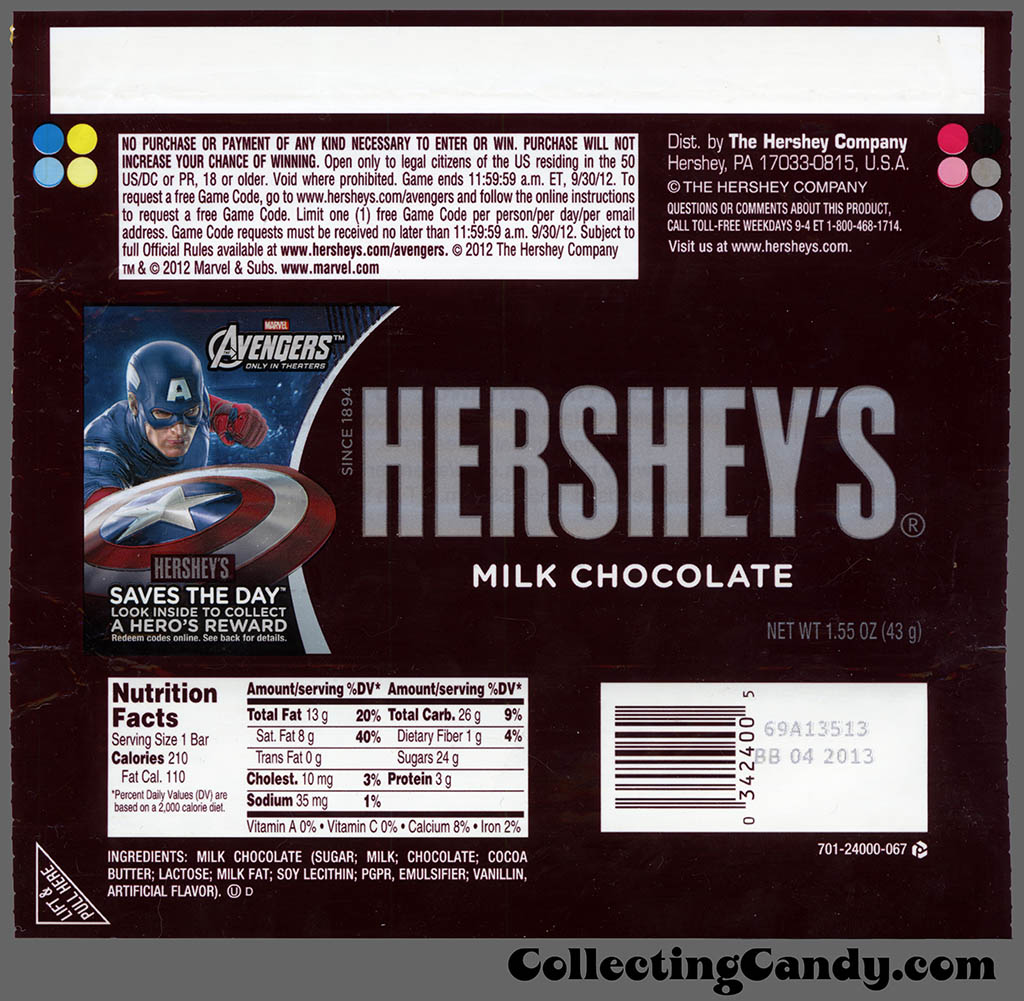 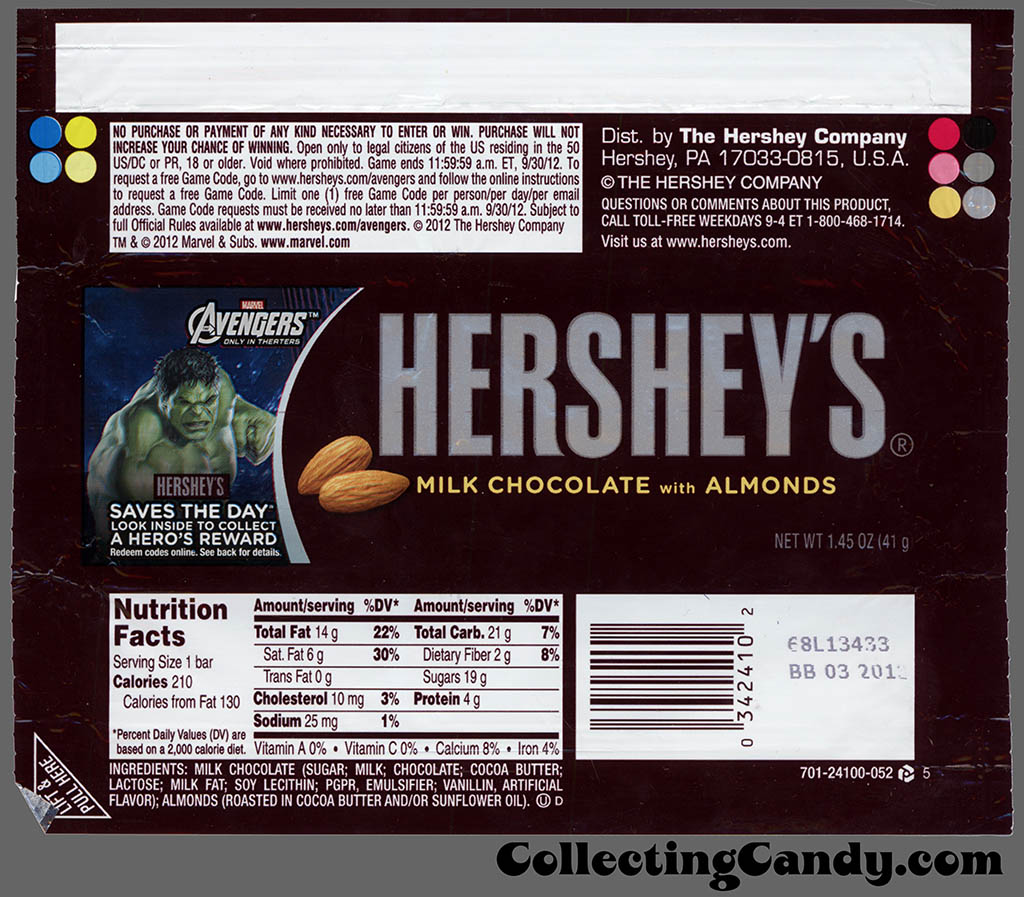 The next four wrappers were originally included in my 2012 Avengers piece but I thought it was worth including them here again along with a few other items from that earlier post. 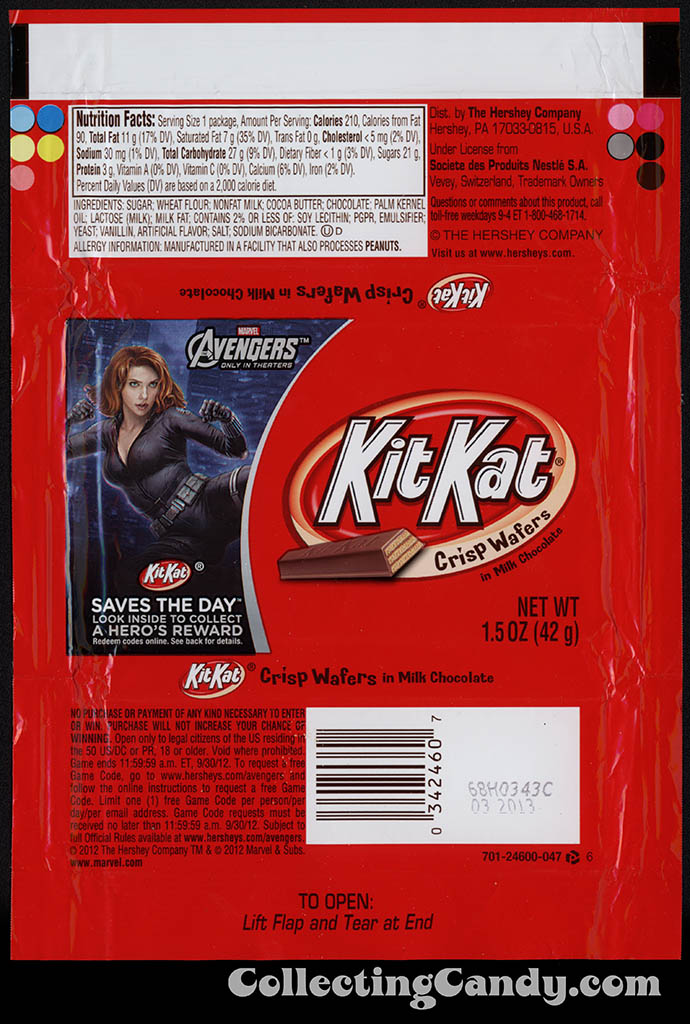 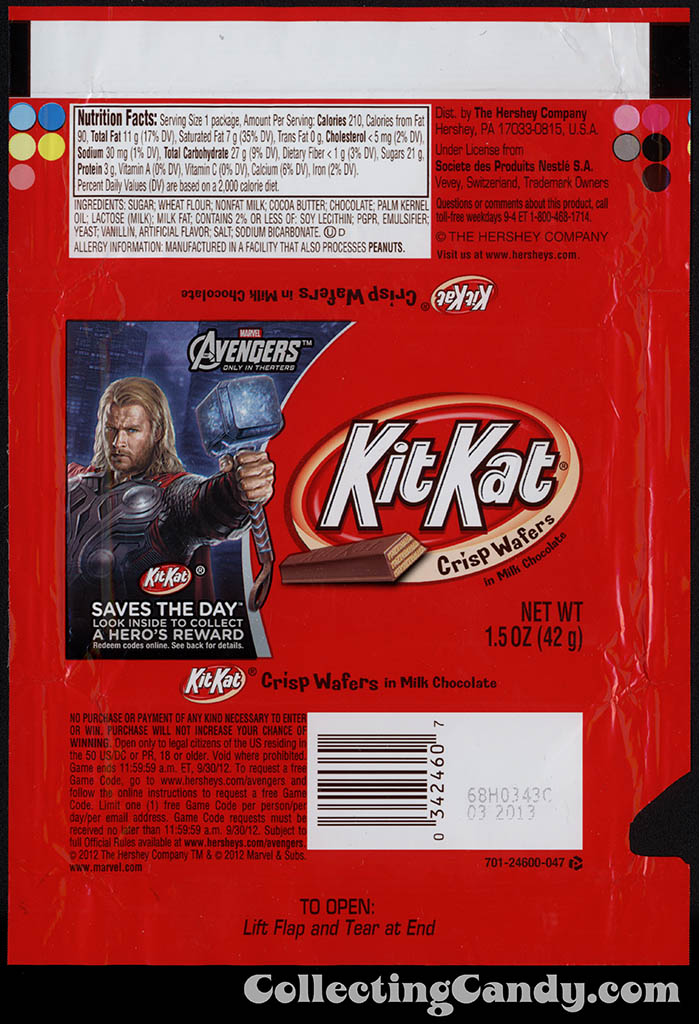 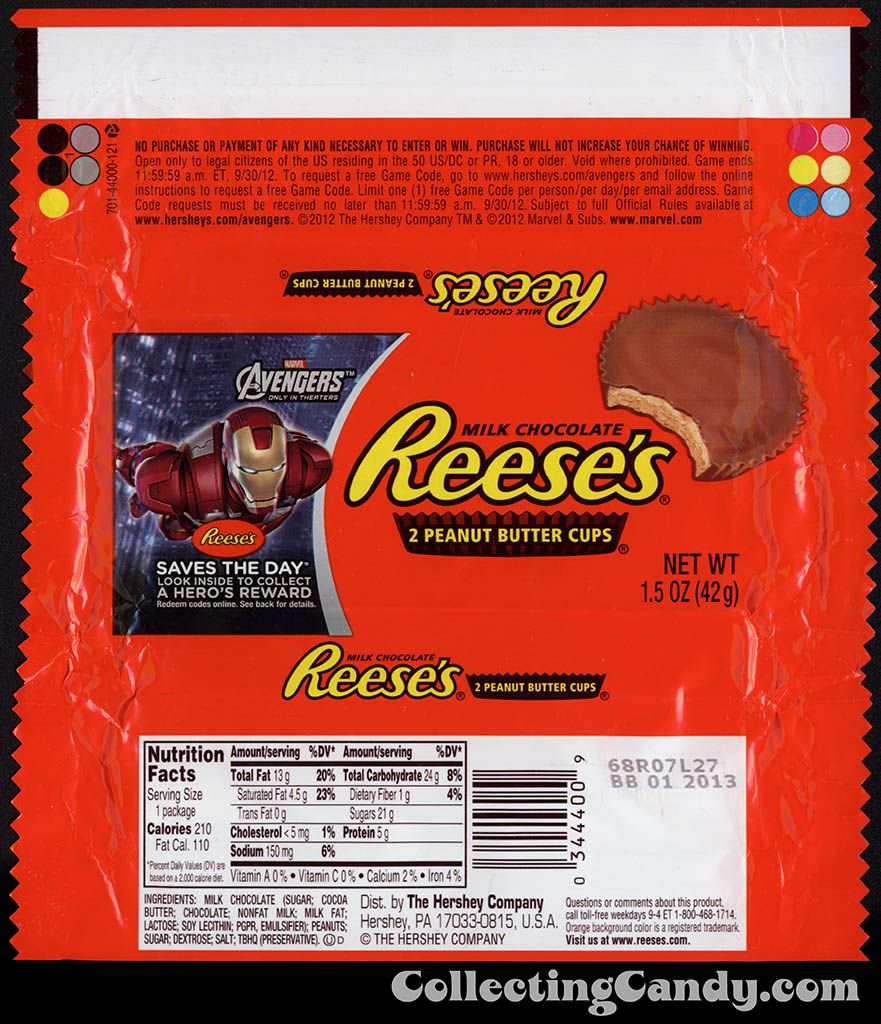 One piece that I picked up and even had in my hands back in 2012 (but regrettably decided not to buy) was a large Avengers-branded bag of Hershey’s Miniatures.  Even though I didn’t get it that day, I at least managed to snap a photo: 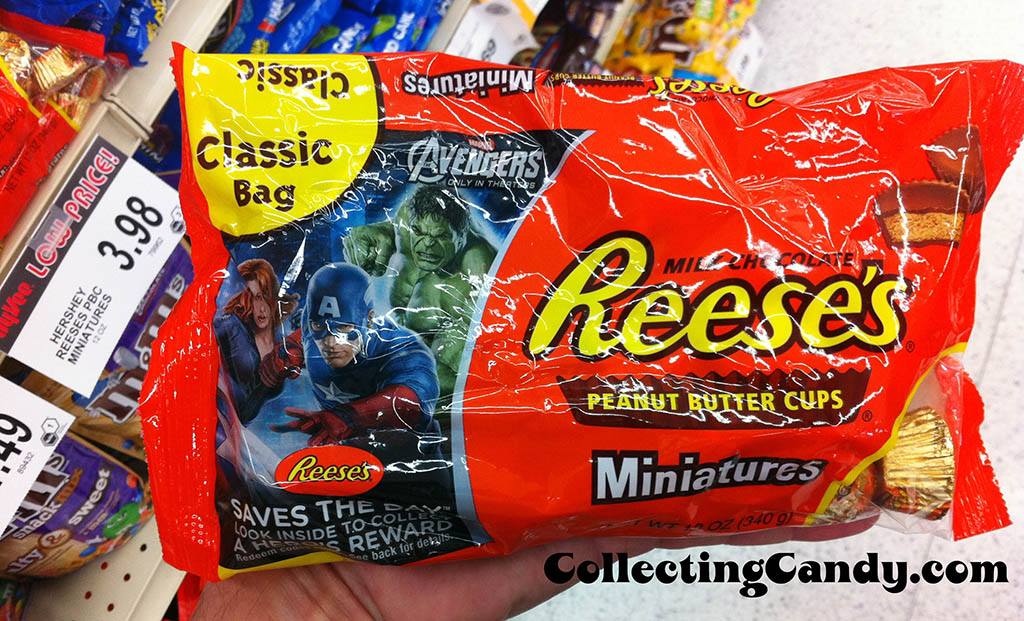 Before showing up on Reese’s wrappers for The Avengers, Iron Man made an appearance in 2010 during his promotional circuit for Iron Man 2: 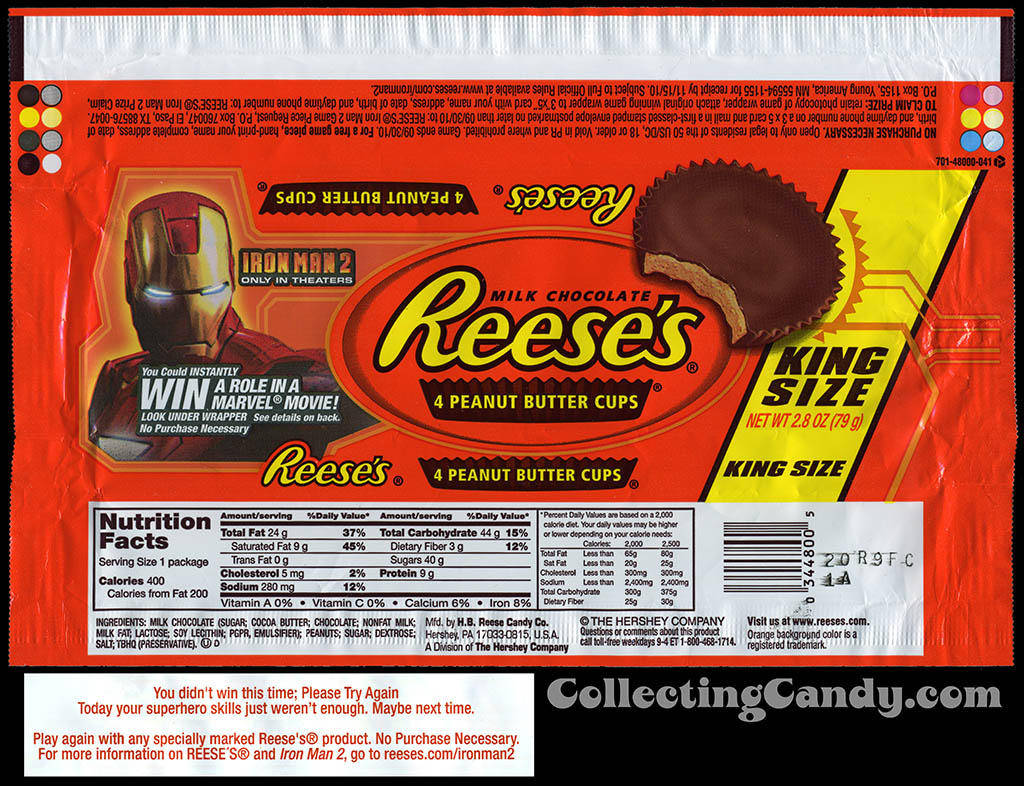 While up in Canada “old shell head” was on wrappers for the Oh Henry bar: 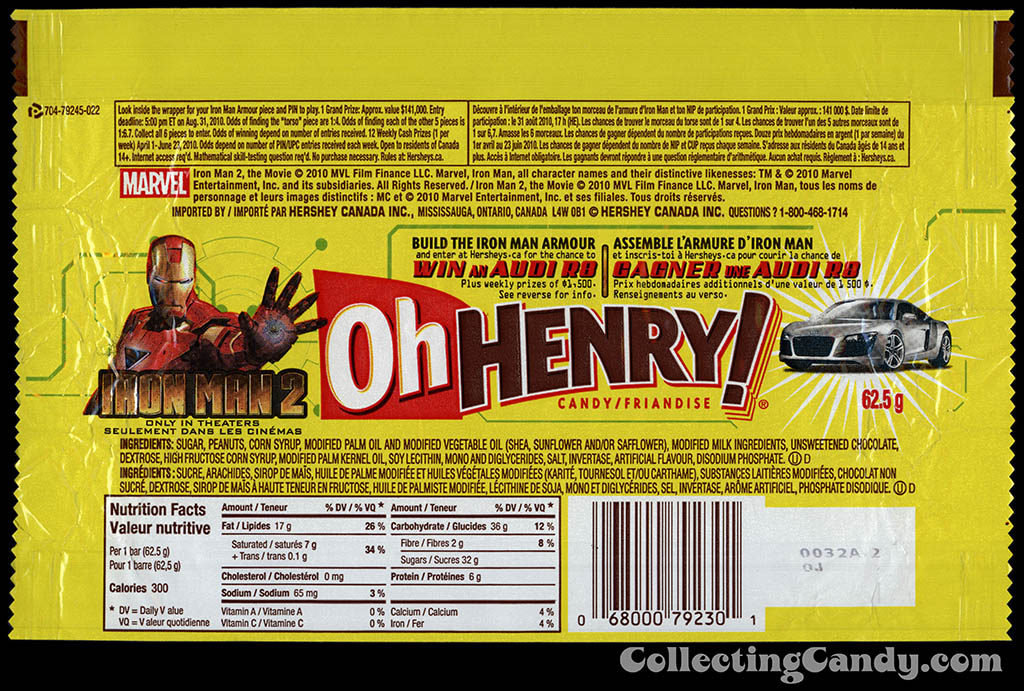 Jumping back a bit further to one of the earliest modern Marvel films, in 2003 the Hulk smashed his way onto Canadian Life Savers wrappers with an exclusive sour lime flavor roll (sadly this tie-in never made it to the United States): 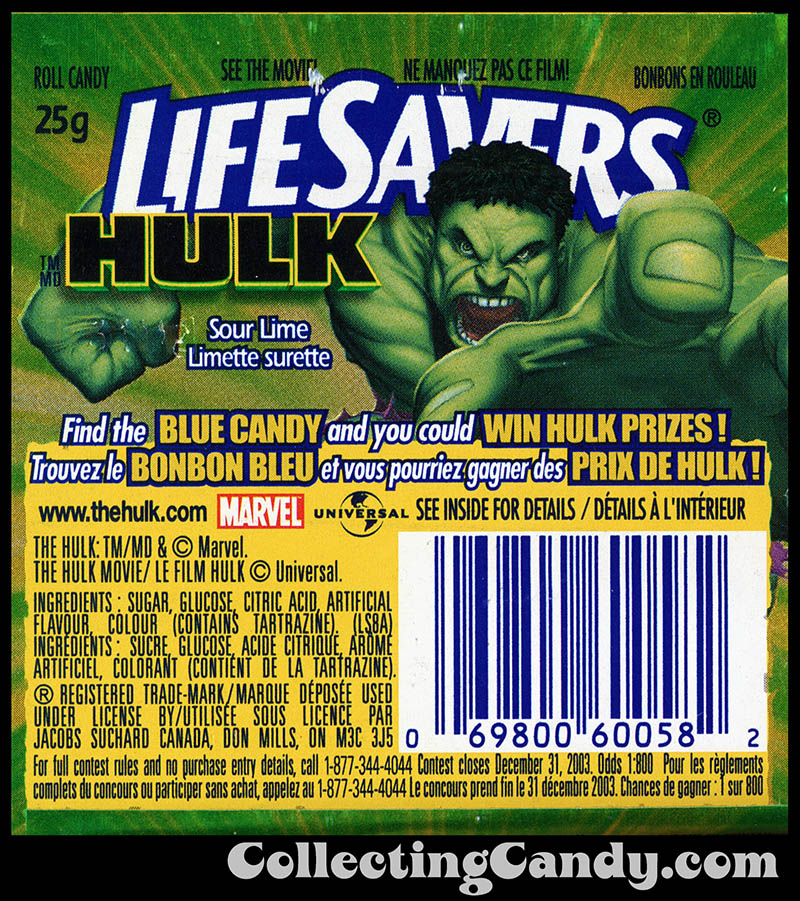 Jumping back even further, the earliest confirmed appearance of an Avenger on a candy bar wrapper also goes to the Hulk.  In this case, the wrapper in question was for a fund-raising chocolate bar put out by the U.S. Pen company way back in 1979.  The Hulk (along with a collection of other Marvel heroes) was featured on the front of the wrapper as well as on a “mini-poster” inside it.  Here it is: 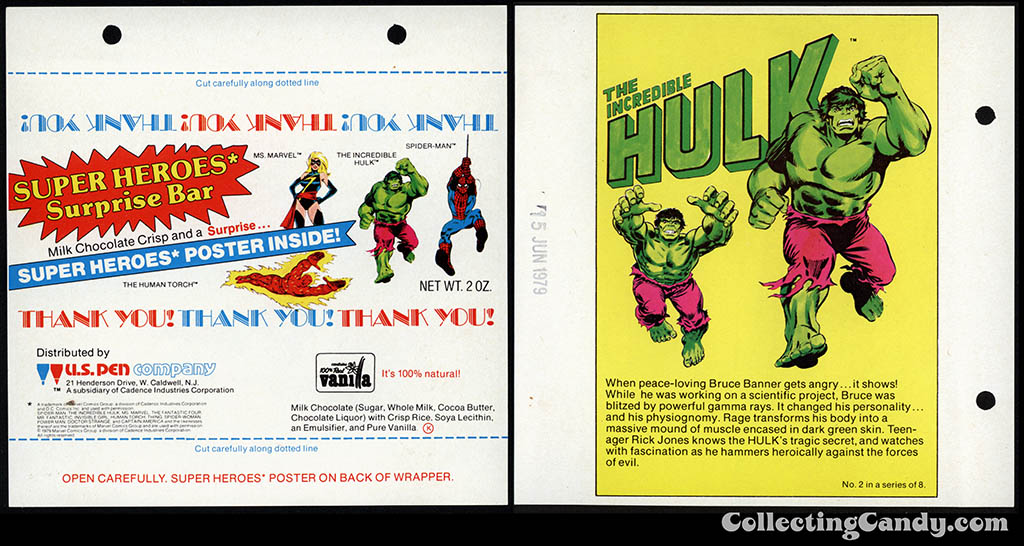 Back in my 2012 post, I covered the Sugar Babies/Charleston Chew Avengers 30th Anniversary wrappers, but I’ll include one example here for reference: 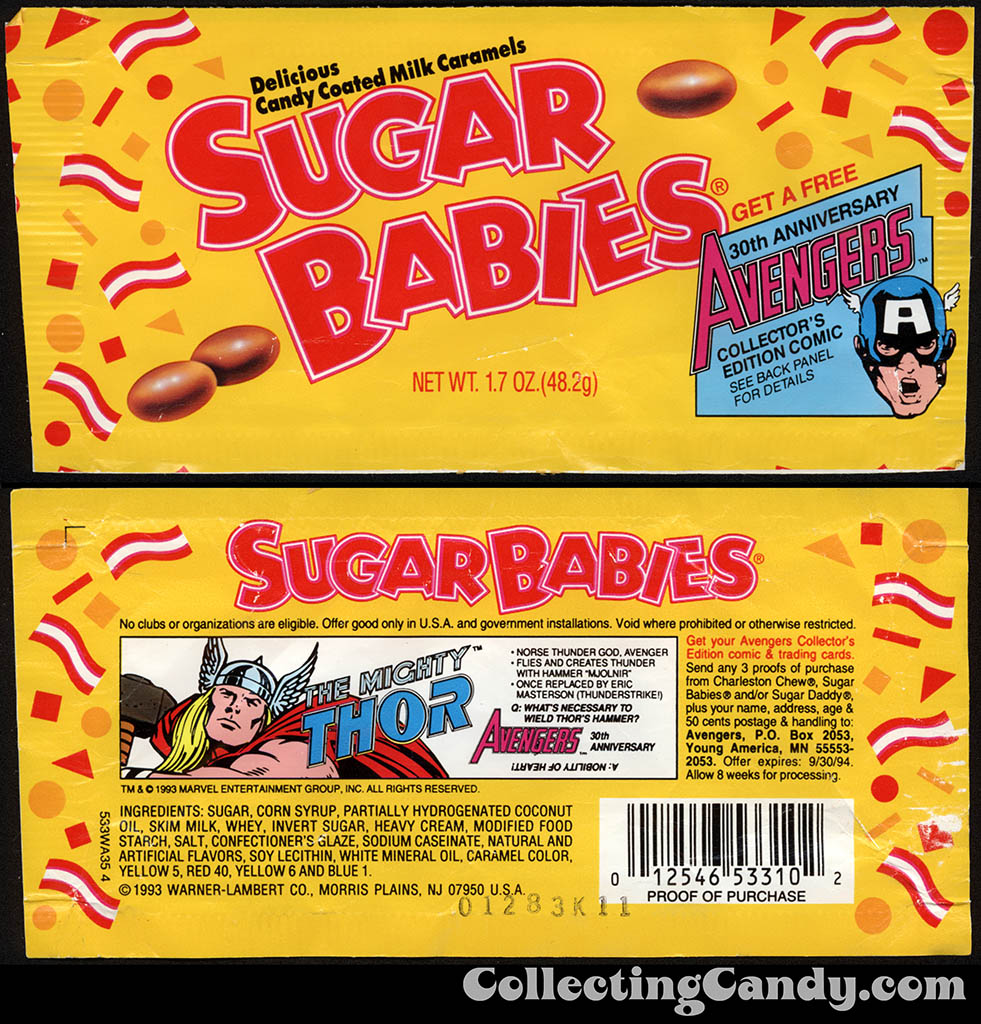 And that’s everything I’ve got to share on my current coverage of Avengers candy.  I will note that the Frankford Company currently has an Avengers and Marvel candy license so you may find some Age Of Ultron branded confectionery items from them, but I’ve not spotted any yet.

And that’s everything for today.  See you next time!!

A New York City based writer, editor and sometimes actor. After spending much of the 1990′s in the comic book business helping tell the stories of Marvel Comics’ X-Men as series editor, he has since split his time between developing his own entertainment properties while still consulting and working on others. Having been described as “the Indiana Jones of lost and forgotten candy”, Jason is one of the country’s premier candy collectors and historians with his discoveries appearing in countless blogs, magazines, newspaper articles, and books. Always happy to share his knowledge and unique perspectives on this colorful part of our popular culture, Jason has consulted with New York’s Museum of Food and Drink and has also been a featured guest on Food Network’s Heavyweights, France’s M6 Capital, and New York’s TheActionRoom.com. My Google Profile+
View all posts by Jason Liebig →
This entry was posted in 1970's, 1990's, Canadian, Chocolate, Hershey and tagged Avengers Age of Ultron, Avengers movie, candy collecting, candy collection, candy collector, candy wrapper collection, candy wrapper collector, collectible, collecting candy, confectionery, confections, licensing, Marvel, movie, packaging, packaging design, superheroes, sweets, The Avengers, tie-in, vintage candy wrappers, wrapper. Bookmark the permalink.