Yesterday, the northeast United States braced for what threatened to be an unprecedented belting of snow and wind.  Here in New York City traffic was halted, mass transit was suspended, schools were closed and grocery stores were raided by consumers prepping for “Snowpocalpyse” 2015.  And while New York City’s weather arrived with more of a whimper than a roar, some areas still got hit pretty hard.

To mark this occasion I thought it would be fun to feature a few Snowman wrappers from my collection.  After all, what makes a snow day more fun than a festive snowman?  Make the jump to check them out.

If you’re safe and home and have no need to travel, snow days can be fun, and I have to say I was looking forward to this one with some happy anticipation.  Looking out my window yesterday afternoon, it seemed as if we were getting the first taste of a bigger storm to come: 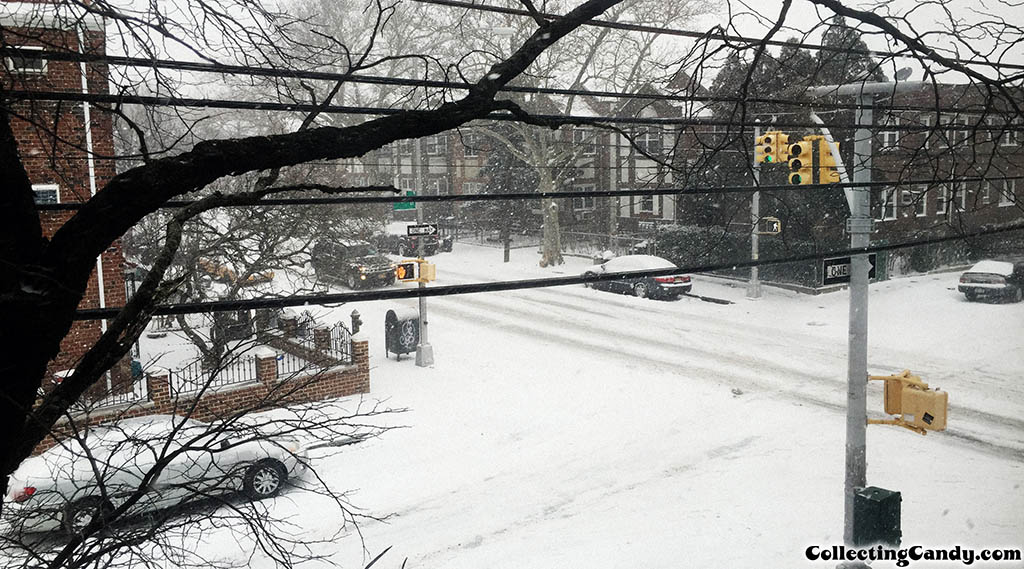 The Snowpocalypse was Impending yesterday out my living room window – January 26th, 2015

Soon after midnight last night, when cars had been ordered off the roads, I expected more wind and snow, but I didn’t really see it.  I jumped online to see how midtown Manhattan fared, and it looked quite peaceful: 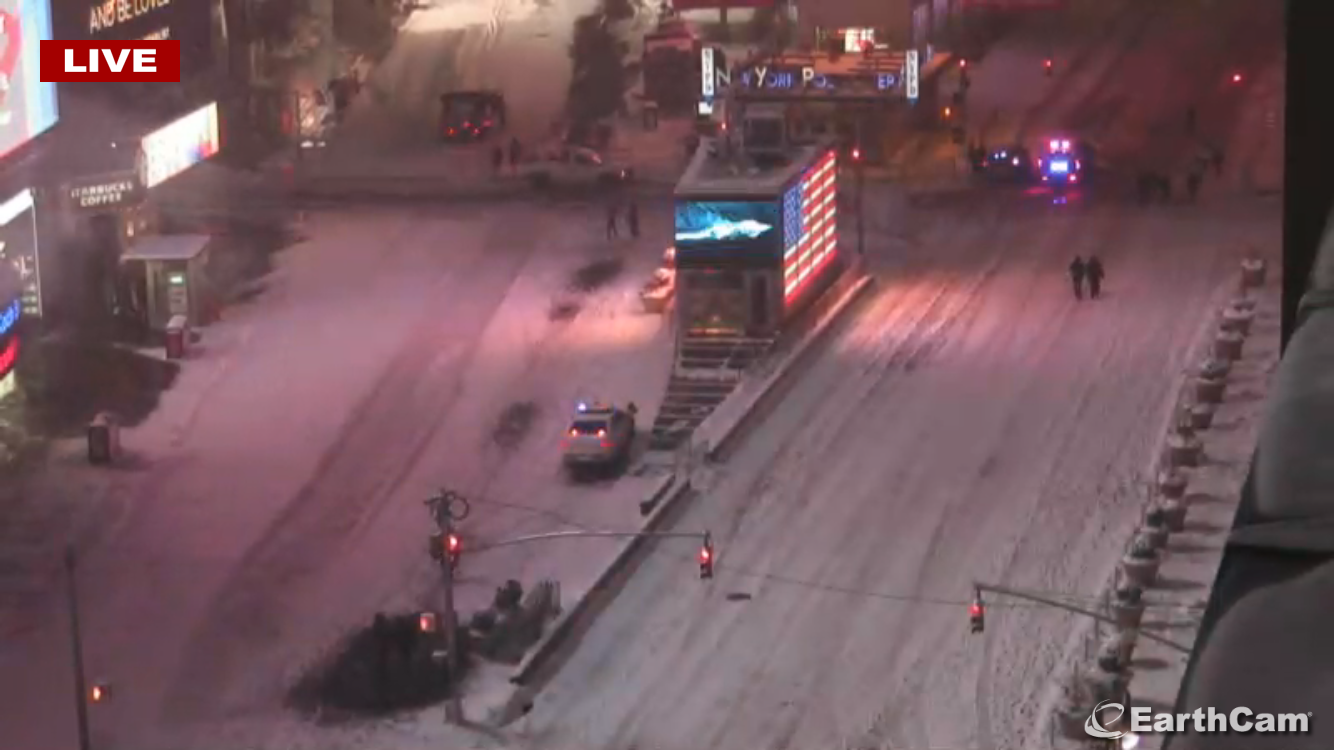 So I went to bed expecting to see a whiteout when I awoke, but alas it was not to be.  Our New York City blizzard had been downgraded to just another storm.

But even though we didn’t get the blizzard of the decade, at least we got our snow day, and with it the inspiration for today’s post.   So let’s get to those snowmen!

Kicking off today’s look at candy wrappers featuring frosty fellows, here’s a wrapper from Boston-based Necco (the New England Confectionery Company) from all the way back in the 1970’s.  Boston definitely got more of a wallop last night than New York did, so it seems appropriate to start here: 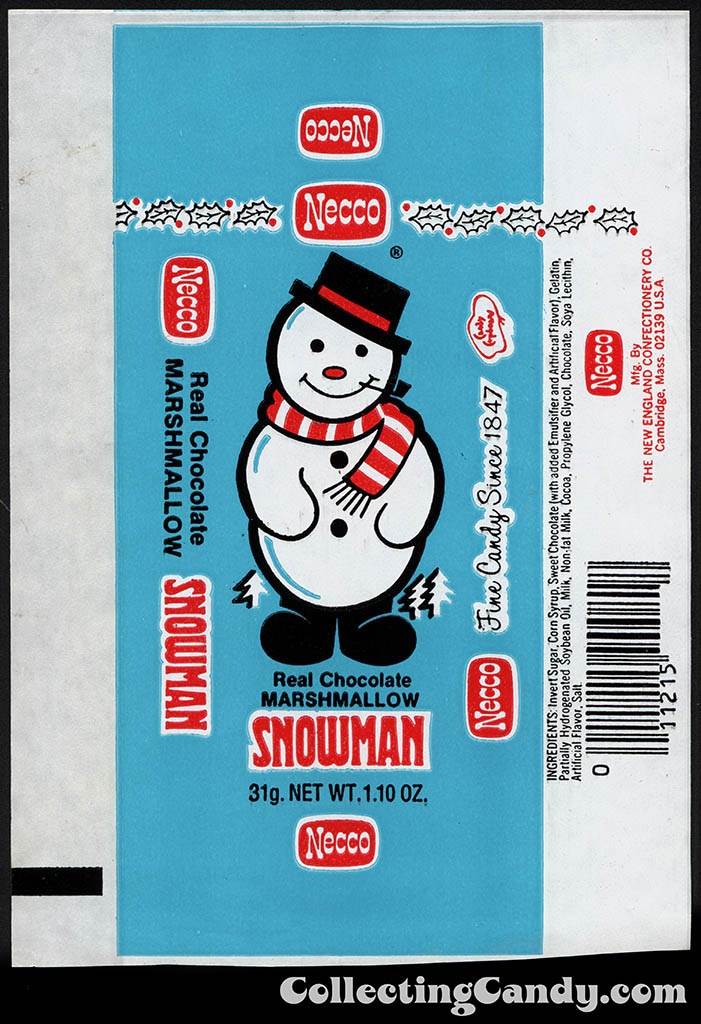 Necco recently released another Snowman-shaped treat, with their Sky Bar-branded Snowman.   I really dig the wrapper design on this one as to me it evokes a bit of “1950’s Christmas”: 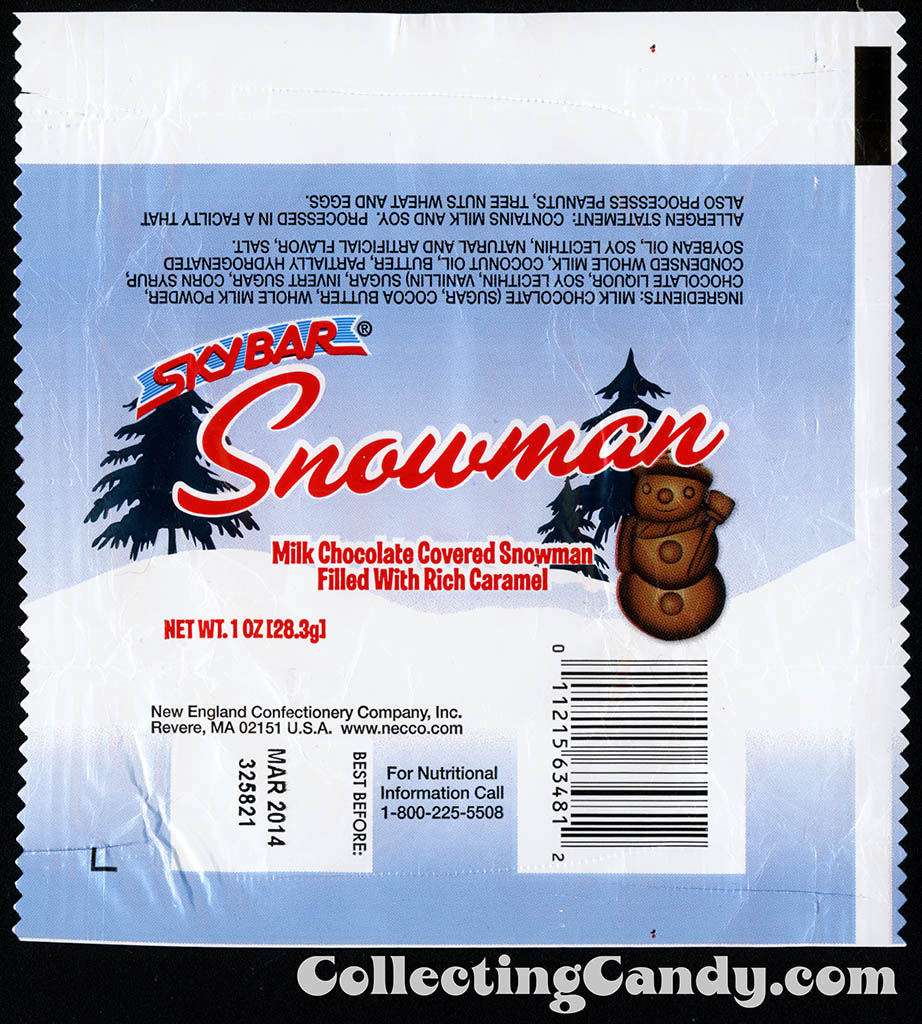 Canada is known for a good amount of snowfall, so here’s a Hershey’s Snowman wrapper I snagged up north back in 2010: 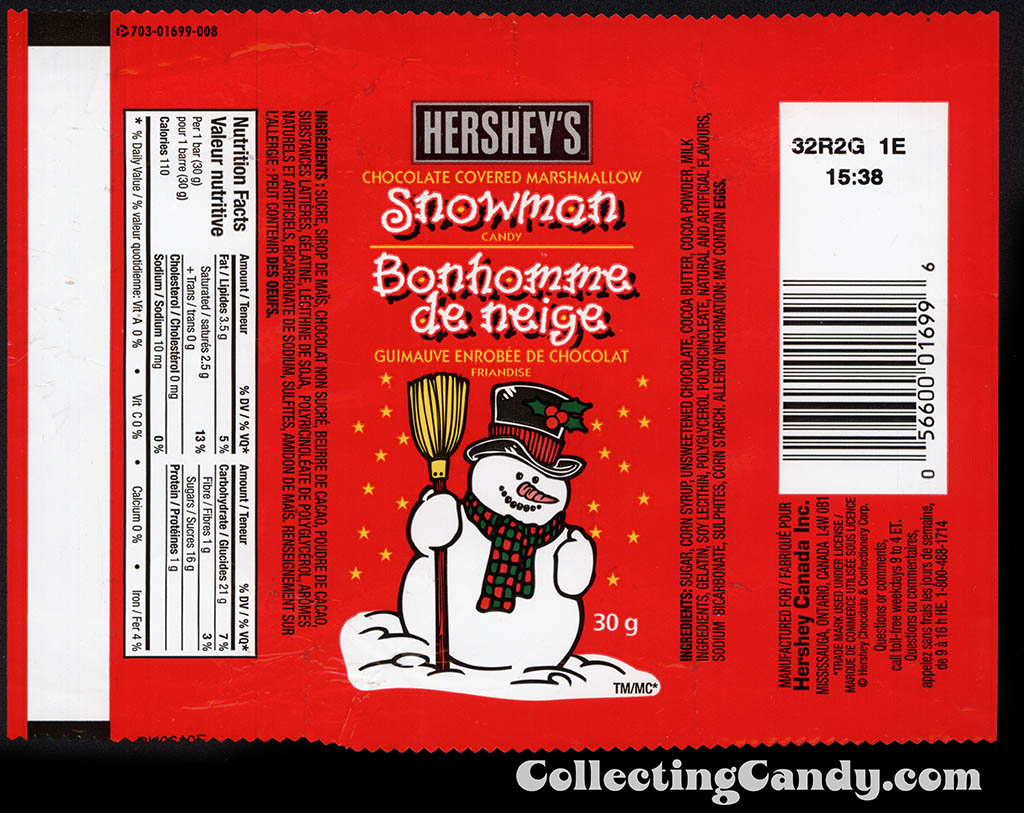 How about a tasty caramel-filled offering? 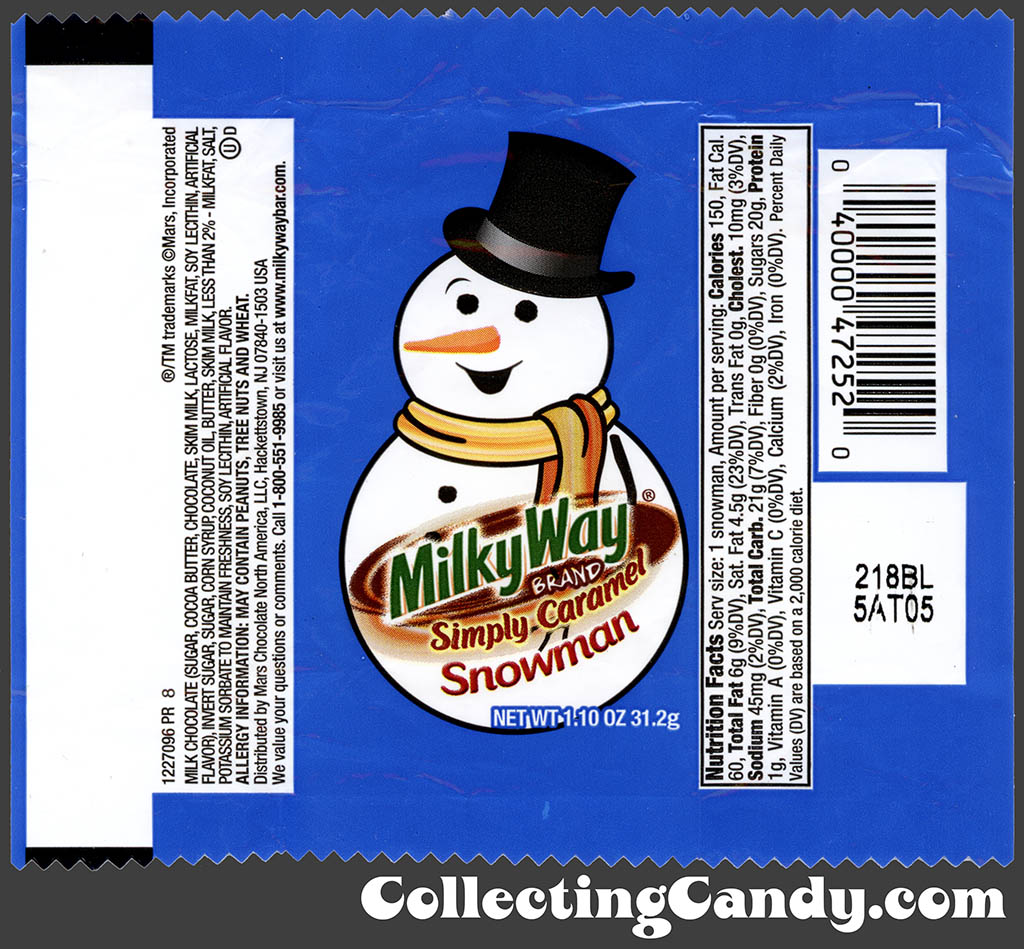 Of course Russell Stover always delivers the goods where this topic is concerned: 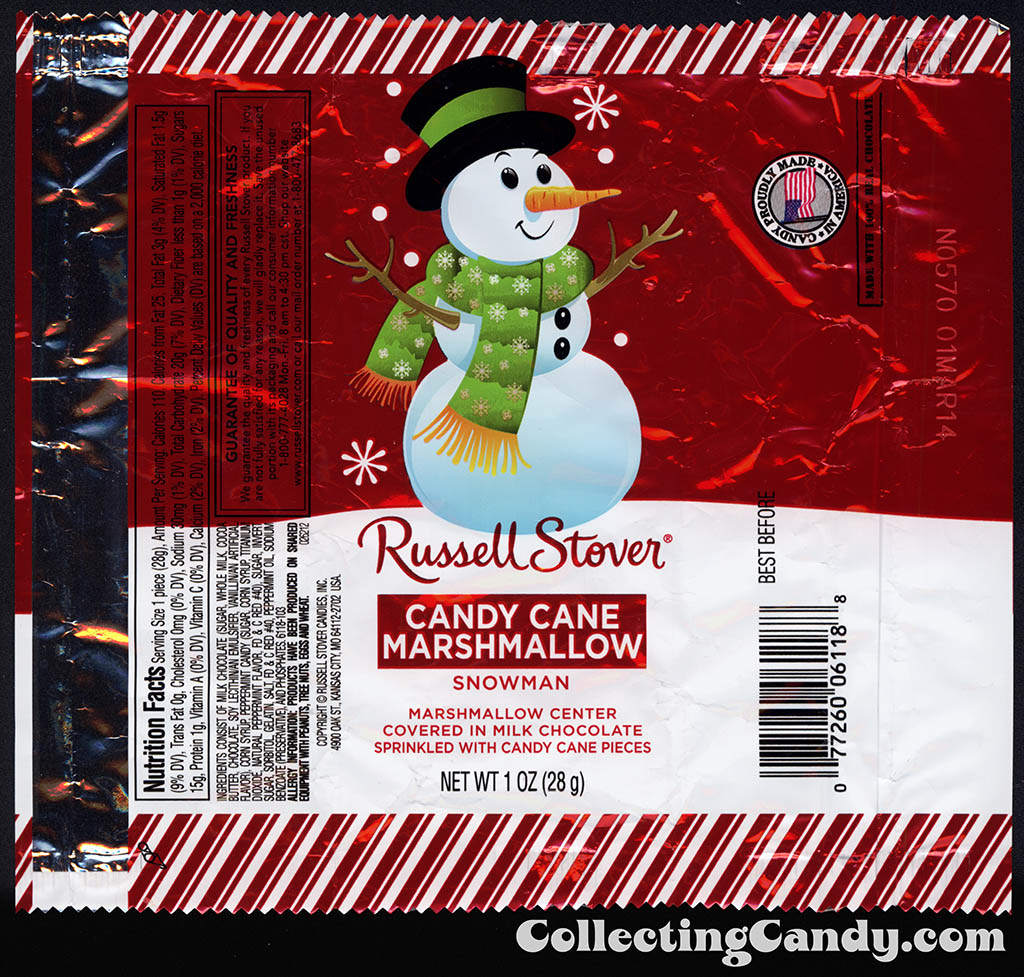 Last up today is a delightful package from Haribo.  Gummies are not something I typically associate with snow or winter, but during the 2013 holiday season, Haribo produced this lovely Merry Snowmen offering: 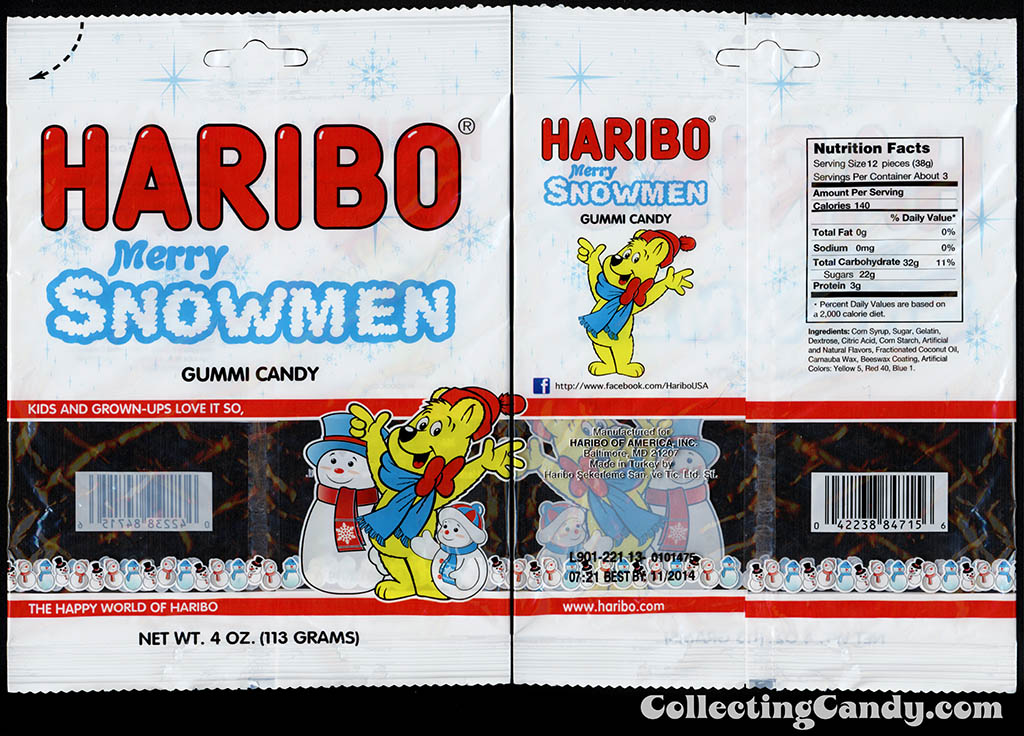 After all of that talk of snowmen, sadly the opportunity to build one doesn’t really present itself where I live here in New York City.  But for those that might have gone out to build one today wherever you are, my winter-loving heart is with you.  (But I’m staying inside, warm and dry!)

Final note: I just realized that this is a bit of a follow-up to a post I wrote for 2013, when we were about to get a massive snowstorm then, too.

A New York City based writer, editor and sometimes actor. After spending much of the 1990′s in the comic book business helping tell the stories of Marvel Comics’ X-Men as series editor, he has since split his time between developing his own entertainment properties while still consulting and working on others. Having been described as “the Indiana Jones of lost and forgotten candy”, Jason is one of the country’s premier candy collectors and historians with his discoveries appearing in countless blogs, magazines, newspaper articles, and books. Always happy to share his knowledge and unique perspectives on this colorful part of our popular culture, Jason has consulted with New York’s Museum of Food and Drink and has also been a featured guest on Food Network’s Heavyweights, France’s M6 Capital, and New York’s TheActionRoom.com. My Google Profile+
View all posts by Jason Liebig →
This entry was posted in 1970's, Canadian, Chocolate, Christmas, Gummies, Hershey, Holiday, Mars, Necco and tagged blizzard, candy collecting, candy collection, candy collector, candy wrapper collection, candy wrapper collector, Christmas, collectible, collecting candy, confectionery, confections, packaging, packaging design, snowman, sweets, vintage candy wrappers, winter, wrapper. Bookmark the permalink.