Over the last decade, the business of artisanal and organic chocolate has exploded.  With small manufacturers sourcing their own cocoa and adding all sorts of unusual and exotic ingredients to their bars, it’s a great time to be a chocolate lover.  Facing a flurry of that kind of confectionery activity, you might be surprised to learn that these types of things were being done at least as far back as forty years ago.

I recently uncovered a remarkable lineup of all-natural chocolate bars featuring ingredients like wheat germ, soy-nut and oathearts – all released by Ghirardelli (pronounced Gear-Are-Deli) and first put on sale way back in 1974!

I’ll be referring to these as Ghirardelli’s “Mother Nature” line due to that concept being invoked on this July 1974 trade ad announcing them: 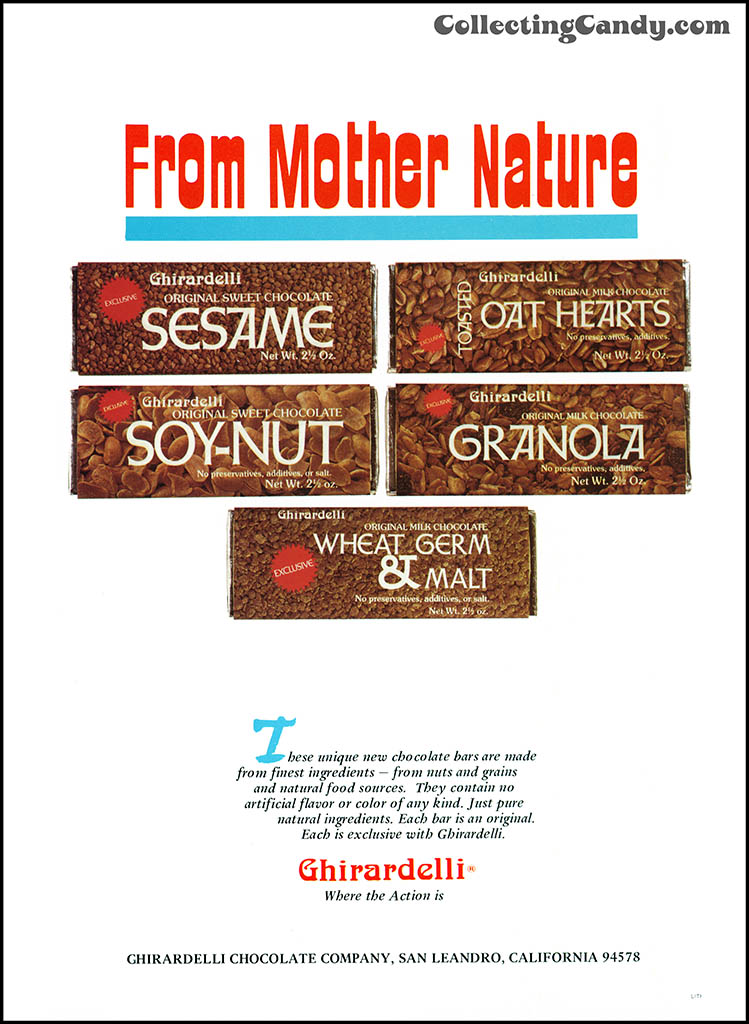 [Note:  Check out the line right underneath the Ghirardelli logo; “Where the Action is”.  So great.]

A “Mother Nature” chocolate bar line makes sense coming from the California-based Ghirardelli, especially when you consider that they were a Bay Area company and in 1974 that region had already long been a center for the counter-culture movement.  Certainly a part of that movement was to “get back to nature” and to be more holistic.  I can imagine that Ghirardelli saw an opportunity to make something unique and different that would appeal to those new tastes.   And make something different they did.

The wrappers for the Ghirardelli Mother Nature line featured a matte finish rather than the more typical glossy, and instead of sporting fanciful brand names these were simply titled by their ingredients in white lettering over a background graphic photo of the ingredients in question.  Pretty progressive for 1974, don’t you think?

I have a few wrapper examples from Ghirardelli’s Mother Nature line in my collection which I’d like to share here. 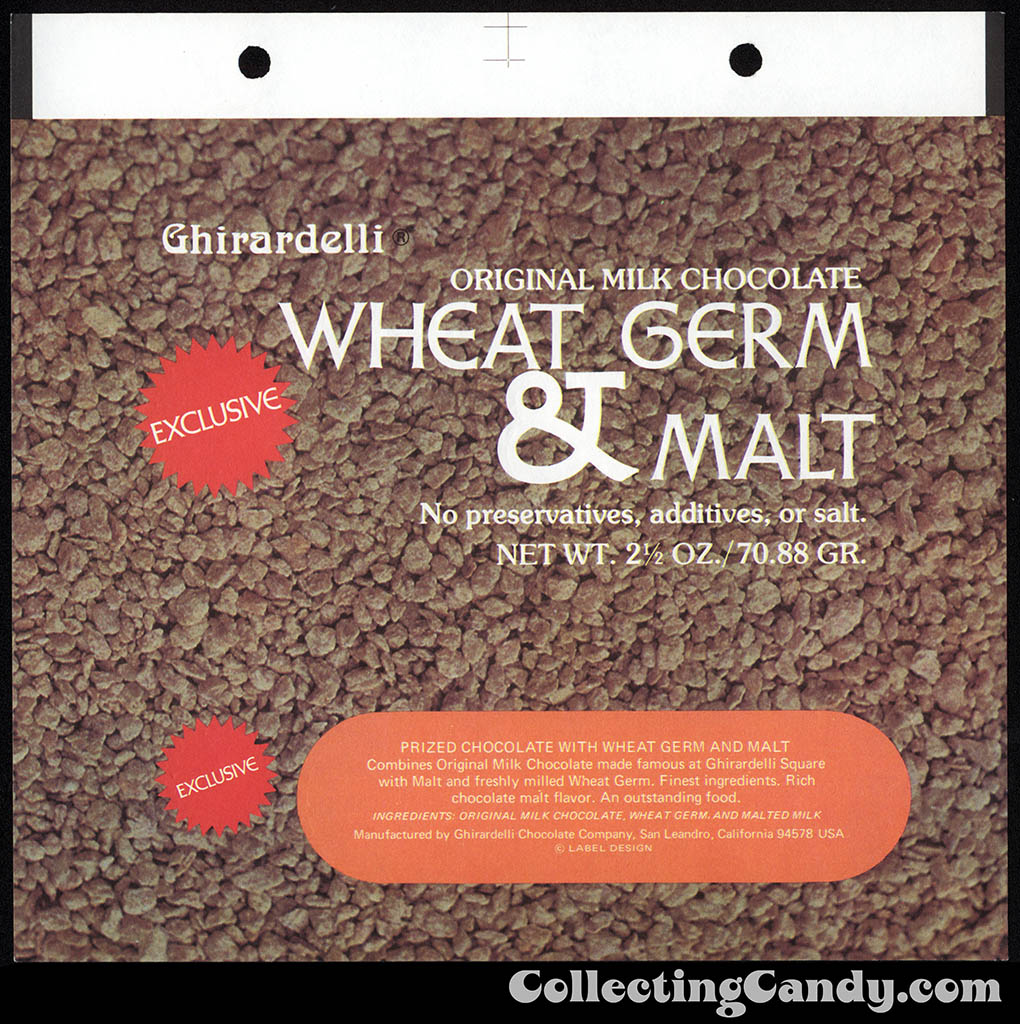 This next one is notable for it’s price tag: 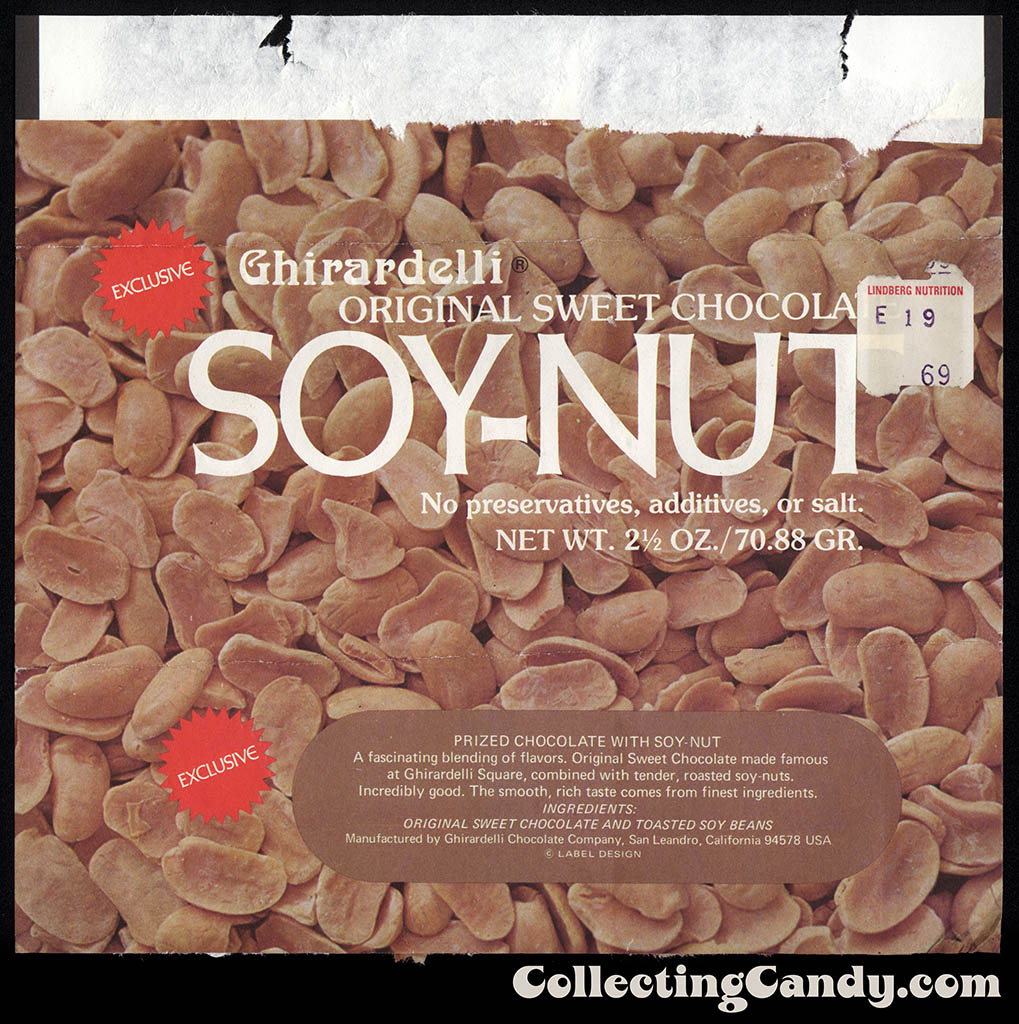 If you look closely, you’ll see that this Ghirardelli Soy-Nut bar sports a price tag from the Lindberg Nutrition store. 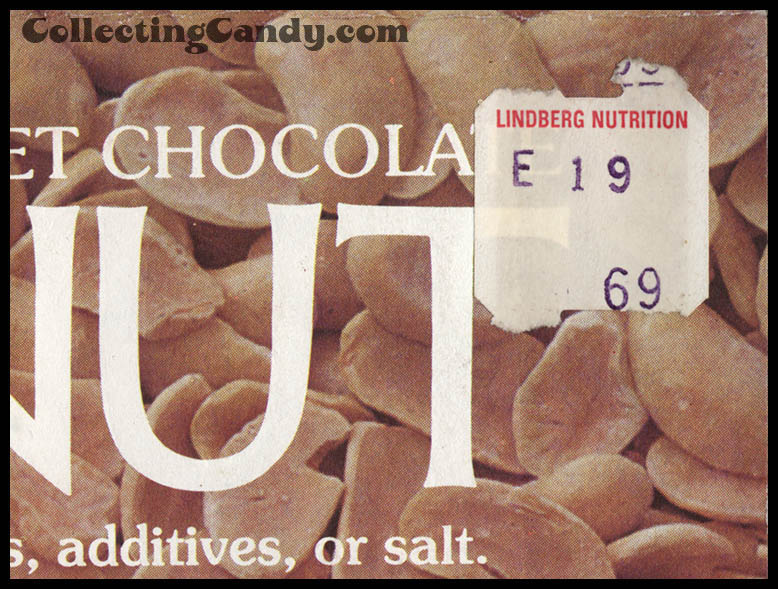 Lindberg is a Southern California health food mainstay, having opened its first store in 1949 (and they’re still around today).  It’s interesting to note that these bars were being sold through health food stores, which probably isn’t that surprising, but it’s great to see direct evidence of it through that decades-old price tag. 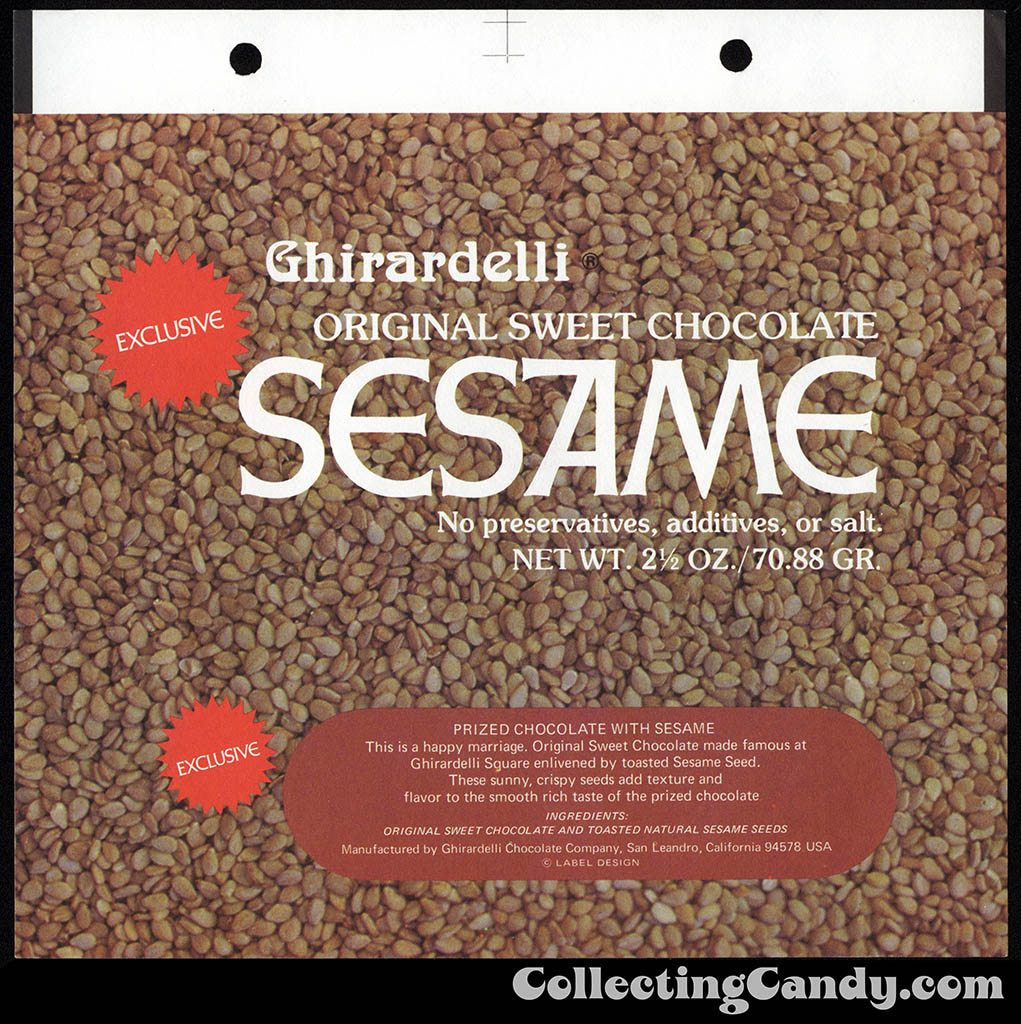 Although the Ghirardelli Mother Nature line was first put on shelves in 1974, there is evidence that they lasted a number of years as you can see by the following updated Sesame wrapper, now with UPC code:

The line also stuck around long enough to gain at least one extension in the form of an all-natural plain chocolate bar, as evidenced by this last wrapper:

Groovy stuff!  Now I just need to find a Granola and an Oat Hearts wrapper to complete my collection!

It’s neat to consider that these kinds of products were being devised and sold four decades ago and that they managed to stick around for a while, too.   Ghirardelli were way ahead of their time with these bars.  Reading about Ghirardelli, I’ve learned that they have a long history of doing new things and breaking uncharted ground, so I suppose you could say that the Mother Nature line was par for their unusually-navigated course.  Whatever the case, I think it’s pretty cool.

And that’s everything I’ve got to share on today’s 1970’s Flashback and our look back at Ghirardelli’s wholesome Mother Nature line.  See you next time!

A New York City based writer, editor and sometimes actor. After spending much of the 1990′s in the comic book business helping tell the stories of Marvel Comics’ X-Men as series editor, he has since split his time between developing his own entertainment properties while still consulting and working on others. Having been described as “the Indiana Jones of lost and forgotten candy”, Jason is one of the country’s premier candy collectors and historians with his discoveries appearing in countless blogs, magazines, newspaper articles, and books. Always happy to share his knowledge and unique perspectives on this colorful part of our popular culture, Jason has consulted with New York’s Museum of Food and Drink and has also been a featured guest on Food Network’s Heavyweights, France’s M6 Capital, and New York’s TheActionRoom.com. My Google Profile+
View all posts by Jason Liebig →
This entry was posted in 1970's, Chocolate and tagged 1970's candy, 1970's chocolate, 1970's wrappers, all-natural, Bay Area, candy collecting, candy collection, candy collector, candy wrapper collection, candy wrapper collector, chocolate, collectible, collecting candy, confectionery, confections, counter-culture, Ghirardelli, organic, packaging, San Francisco, sweets, vintage candy wrapper, wrapper. Bookmark the permalink.