Today’s post is a direct follow-up to last year’s CountdownToHalloween entry where I covered Necco’s super-cool Batwing Wafers.  You see, in 2013 not only did Necco introduce of that fun seasonal product but they also wowed with the premiere of their Mummy Hearts, a Sweethearts-branded conversation heart just for Halloween!

I was a big fan of the style of Necco’s Batwing Wafers and I definitely dig Mummy Hearts.  Offering the classic conversation heart shape, Mummy Hearts feature Halloween-themed messages printed on them.

The packaging for Mummy Hearts is fantastic and a joy to behold.   I shouldn’t be surprised at it was designed by the same guy who created their Batwing Wafers packages: Necco’s talented packaging designer Geoff Bloom.  Here it is: 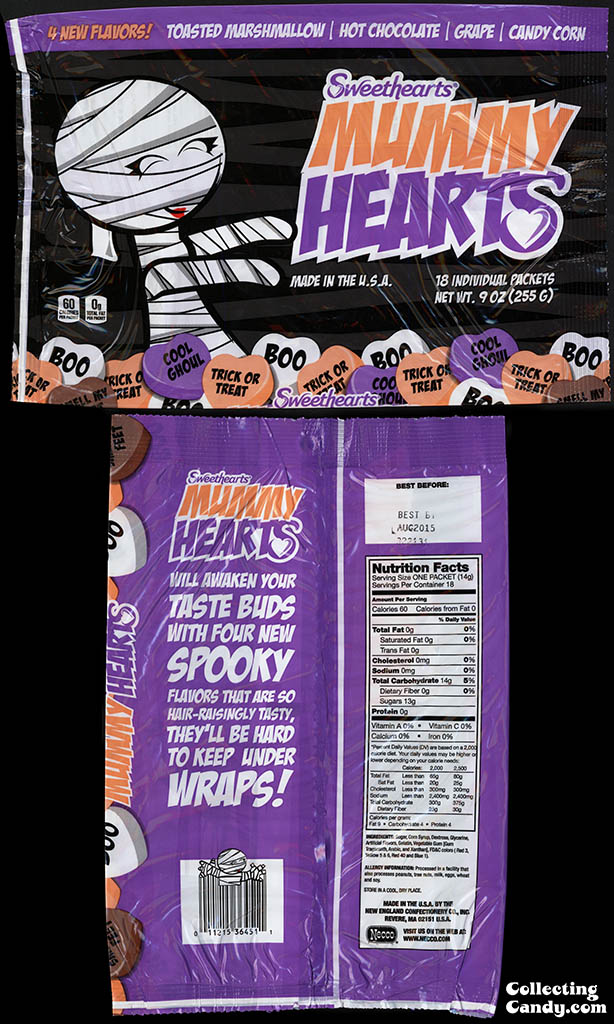 Look at how much creativity they put into this one.  As a few of my favorite modern packages have incorporated in recent years, they even brought some fun to the UPC code:

As much as I love these already, I think I would be over-the-moon if they decided to do a release them in the classic Sweethearts Conversation Hearts box packaging.  I’m crossing my fingers for 2015!

And that’s everything for today’s post and a look at a new favorite, Necco’s Mummy Hearts!  See you next time!

A New York City based writer, editor and sometimes actor. After spending much of the 1990′s in the comic book business helping tell the stories of Marvel Comics’ X-Men as series editor, he has since split his time between developing his own entertainment properties while still consulting and working on others. Having been described as “the Indiana Jones of lost and forgotten candy”, Jason is one of the country’s premier candy collectors and historians with his discoveries appearing in countless blogs, magazines, newspaper articles, and books. Always happy to share his knowledge and unique perspectives on this colorful part of our popular culture, Jason has consulted with New York’s Museum of Food and Drink and has also been a featured guest on Food Network’s Heavyweights, France’s M6 Capital, and New York’s TheActionRoom.com. My Google Profile+
View all posts by Jason Liebig →
This entry was posted in CountdownToHalloween, Halloween, Holiday, Necco and tagged Boston, candy collecting, candy collection, candy collector, candy wrapper collection, candy wrapper collector, collectible, collecting candy, confectionery, confections, conversation hearts, Halloween, Necco, New England Confectionery Company, packaging, seasonal, sweets, vintage candy wrapper, wrapper. Bookmark the permalink.