Healthy Food Brands, or The HFB Candy Company as they’re now called, are the folks who have been behind the Angry Birds gummies line since its introduction in 2012.  Earlier this year, HFB followed up their success with the Angry Birds license by releasing the first confectionery products based on the hit mobile game Candy Crush.  And for Halloween 2014, the Candy Crush candy line gets its first seasonal special release with Candy Crush Halloween Color Bombs!

Since I have yet to cover the all-year-round Candy Crush line from HFB, I’ll be taking a look at that today in addition to the special Halloween release box.

As most of you will undoubtedly already know, Candy Crush is a hugely successful smartphone game.  I was able to meet the folks developing the Candy Crush candy license last year and after that meeting I decided to play the game for a time.  Though I only spent a few months with it, I came away understanding why it’s so successful – it’s quite a fun, well-designed and ridiculously-addictive game.

So Candy Crush would seem to be the most obvious thing to license for actual confectionery products, as it’s now candy-imitating-a-game-imitating-candy, and I think that it is.  But it might also be the most “meta” candy line that has ever been put on a shelf. 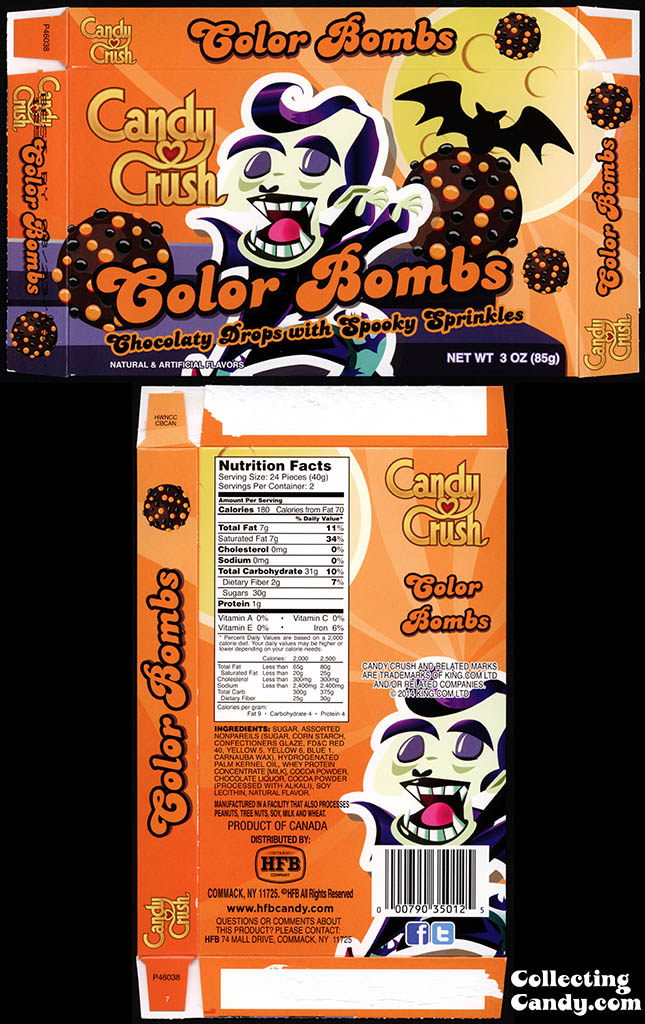 Color Bombs are essentially nonpareils, the most common version of them being Sno-Caps, and covered with colorful sprinkles.  In the case of the Halloween version, the sprinkles are holiday appropriate colors.   The packaging sports the same style artwork and appealing design as the all-year round version.  The look is right out of the game and the colors and printing on the box are bright and vibrant.  It’s well-done and I really dig what they’re doing here.

As a fan of HFB’s Angry Birds line, and how they created special seasonal releases for that, it’s great to see them doing the same with their fledgling Candy Crush licensed line.

Here’s a look at the standard version Color Bombs box next to the seasonal release: 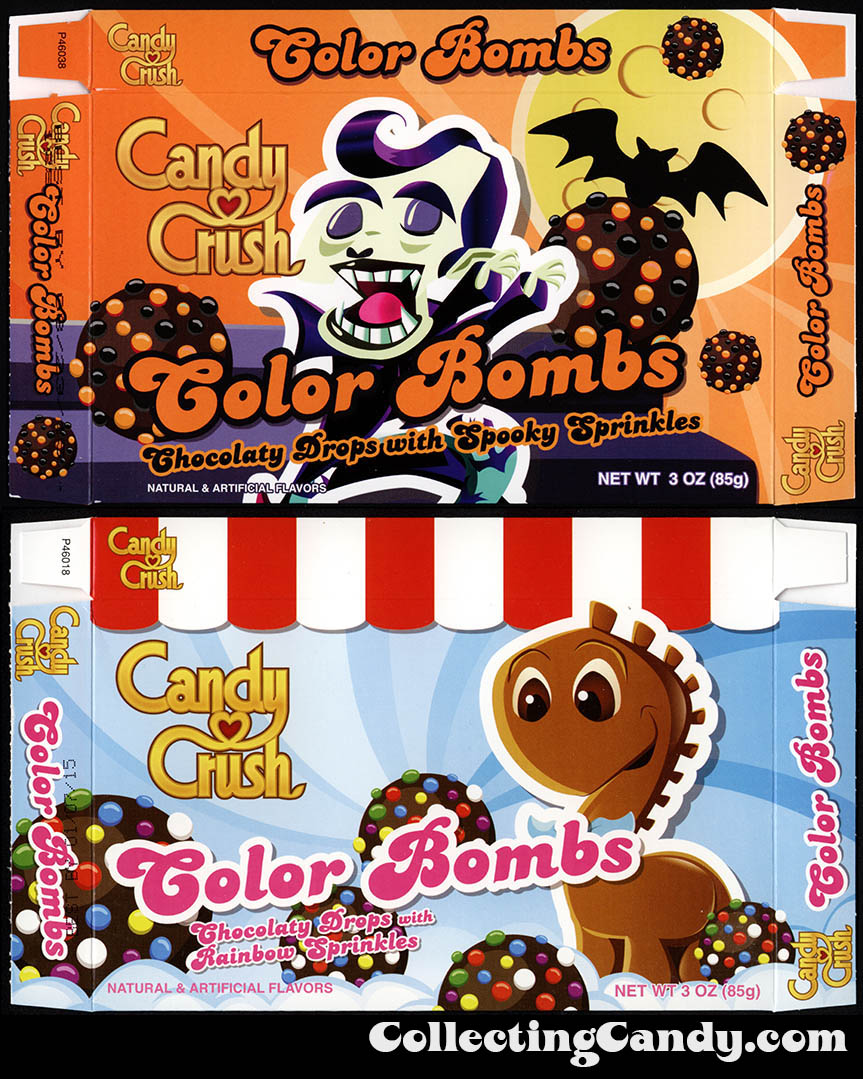 So, now that I’ve teased a bit of the all-year-round Candy Crush line, let’s take a look at it.

I was able to pick up most of the boxed assortment of Candy Crush offerings fairly easily, though the Sugar Crush Pop Rocks-style box took a bit of hunting.  Here they are: 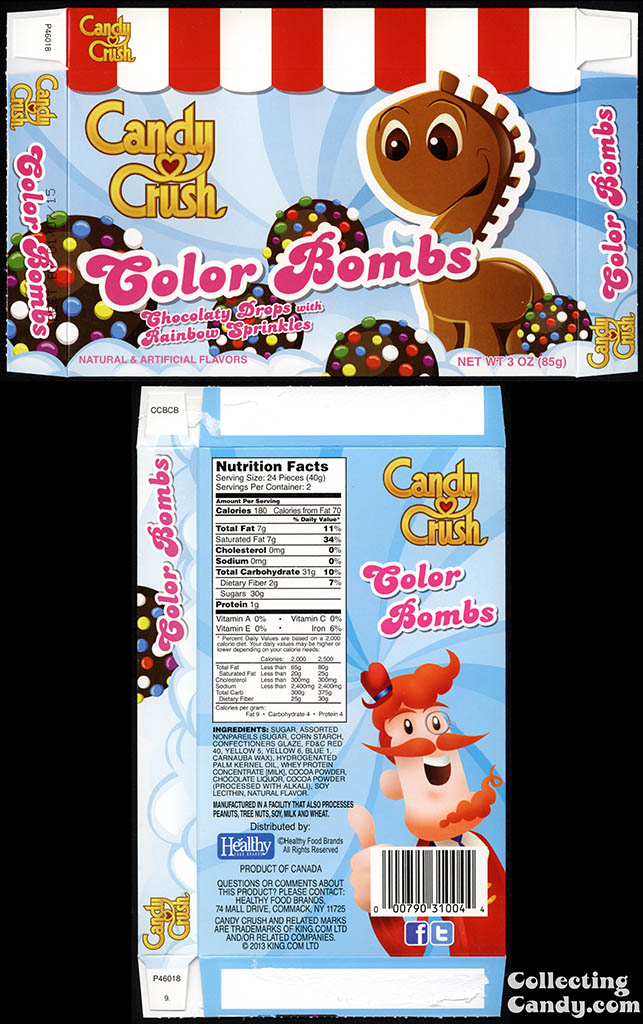 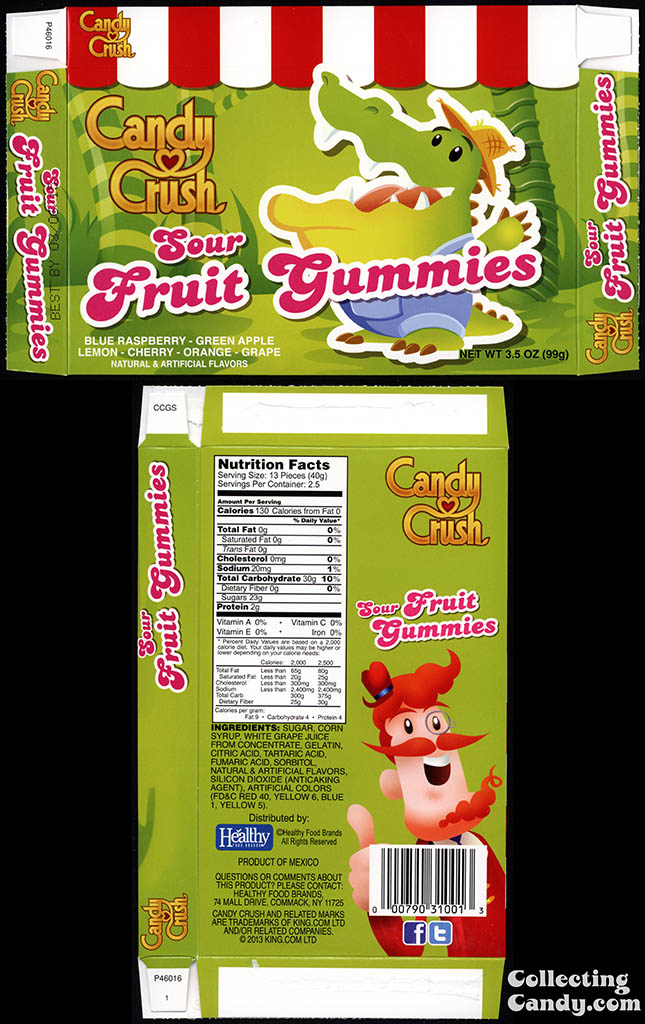 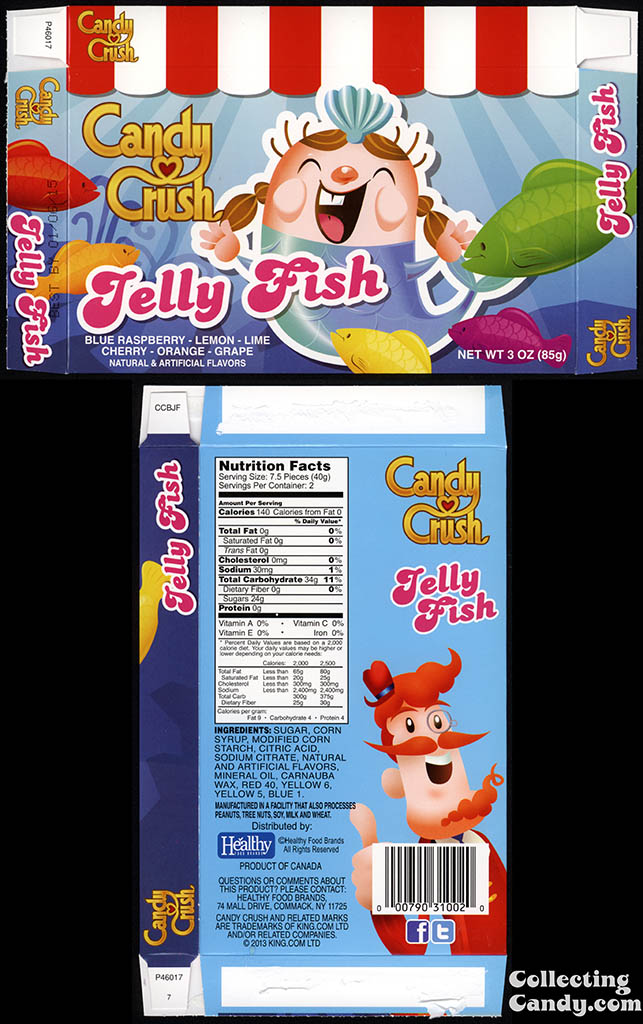 The candies themselves take direct inspiration from the candy found in the Candy Crush game.  It’s on-the-nose and in a way that makes good sense.

Though I spotted the standard Candy Crush boxed releases at a few different venues, I was only ever to find these Sugar Crush items at a local Toys R Us store: 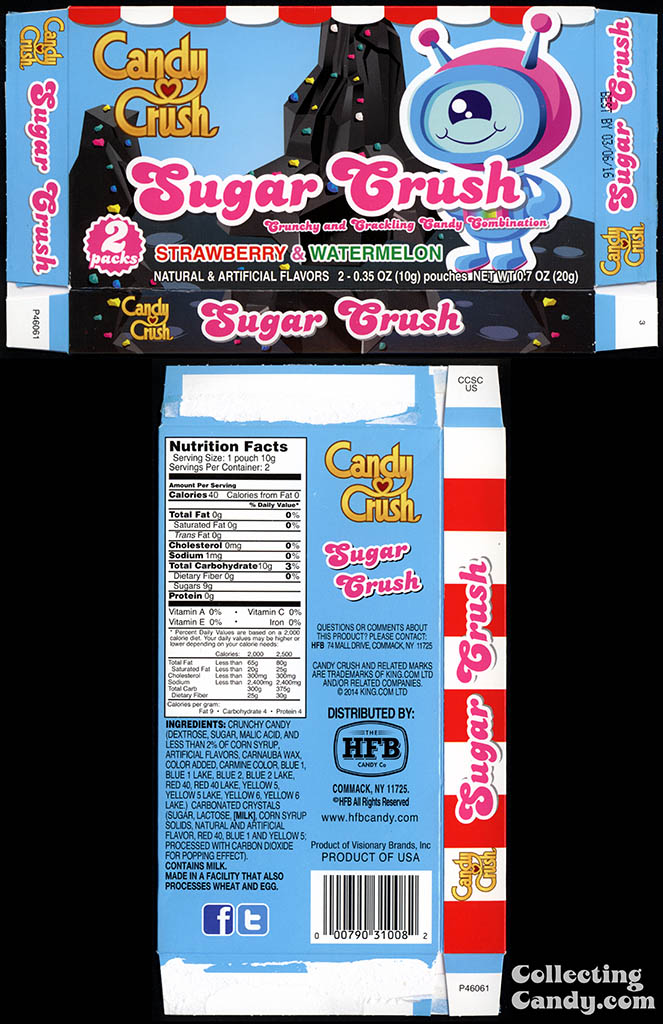 I quite like the artwork on the Sugar Crush box and packets, and I think it’s my favorite of the bunch.  Either that or I just like it more because it took more work to track down.

Each Sugar Crush box contained two packets of carbonated popping candy ala Pop Rocks, in either strawberry or watermelon flavor.  Here’s a look at the individual packets: 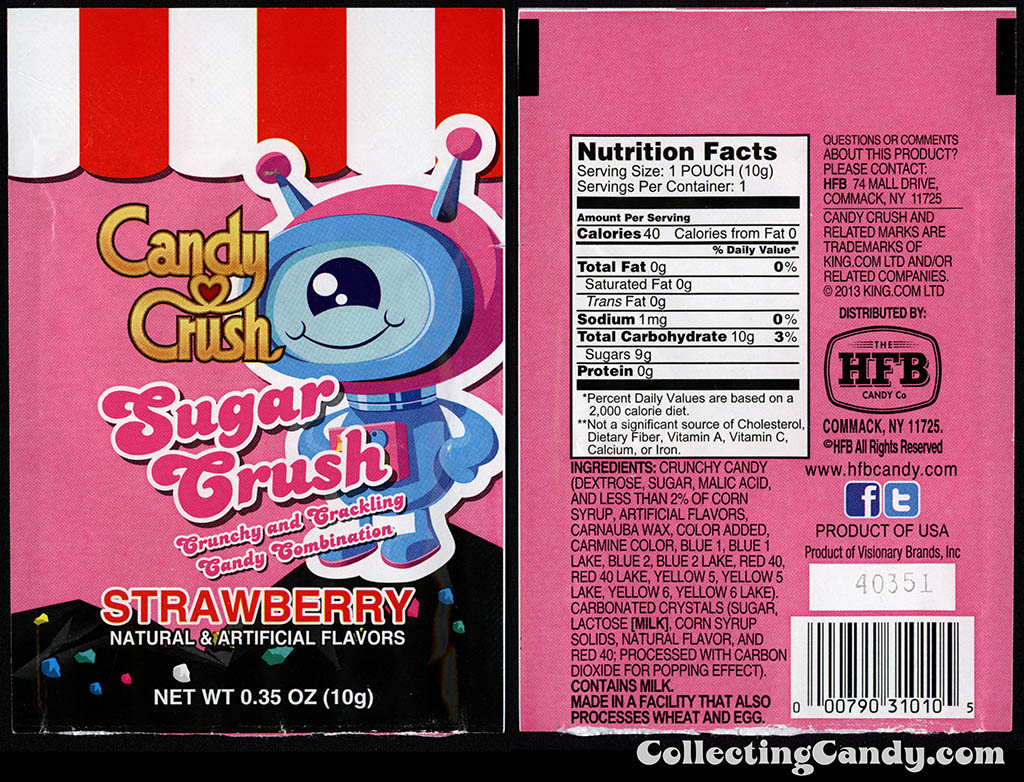 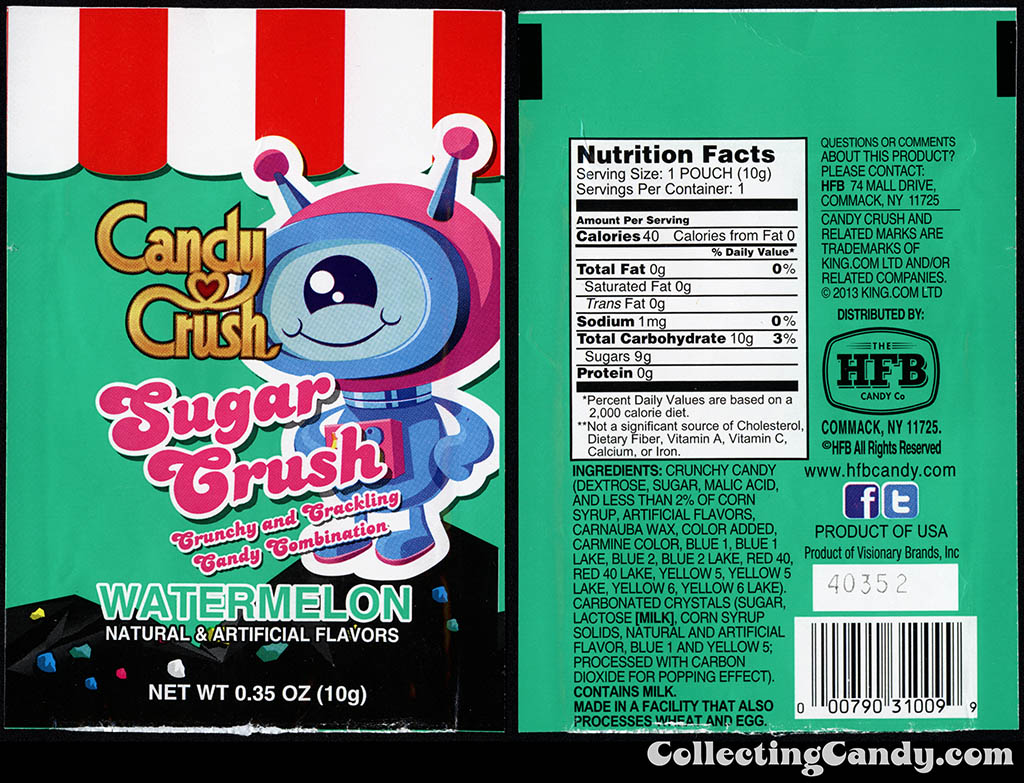 Beyond the boxed versions, the four main offerings also got peg bag releases, which I picked up and will share here.  These feature the same colorful Candy Crush artwork and characters found on the box versions: 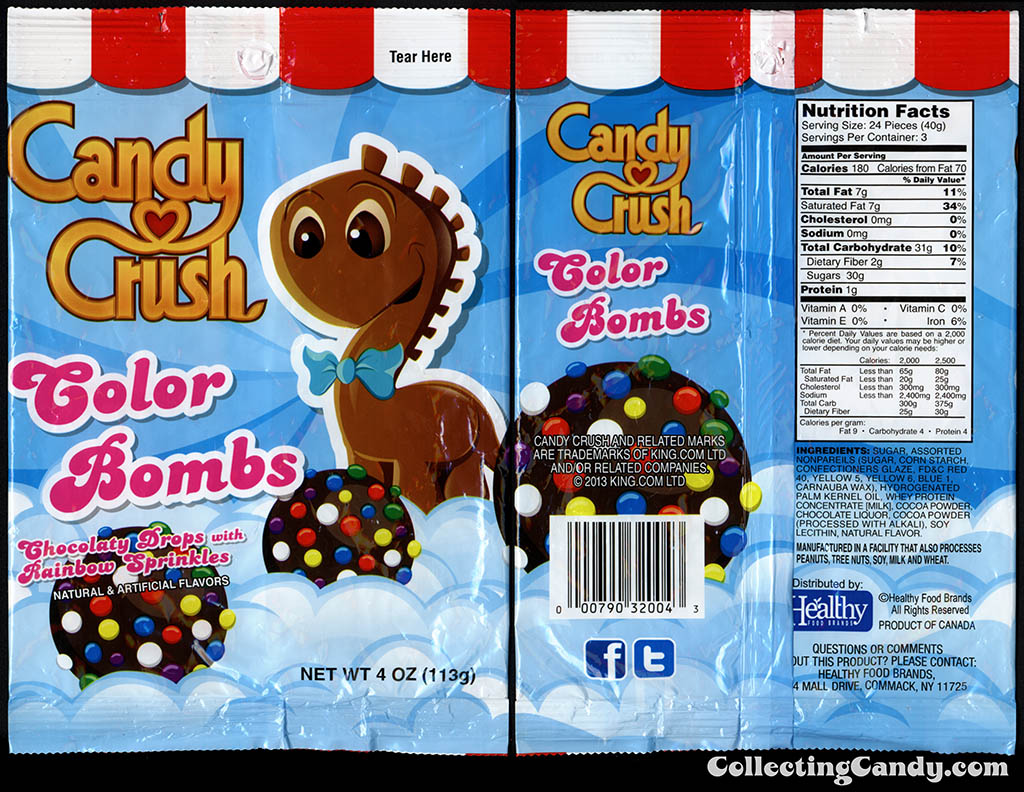 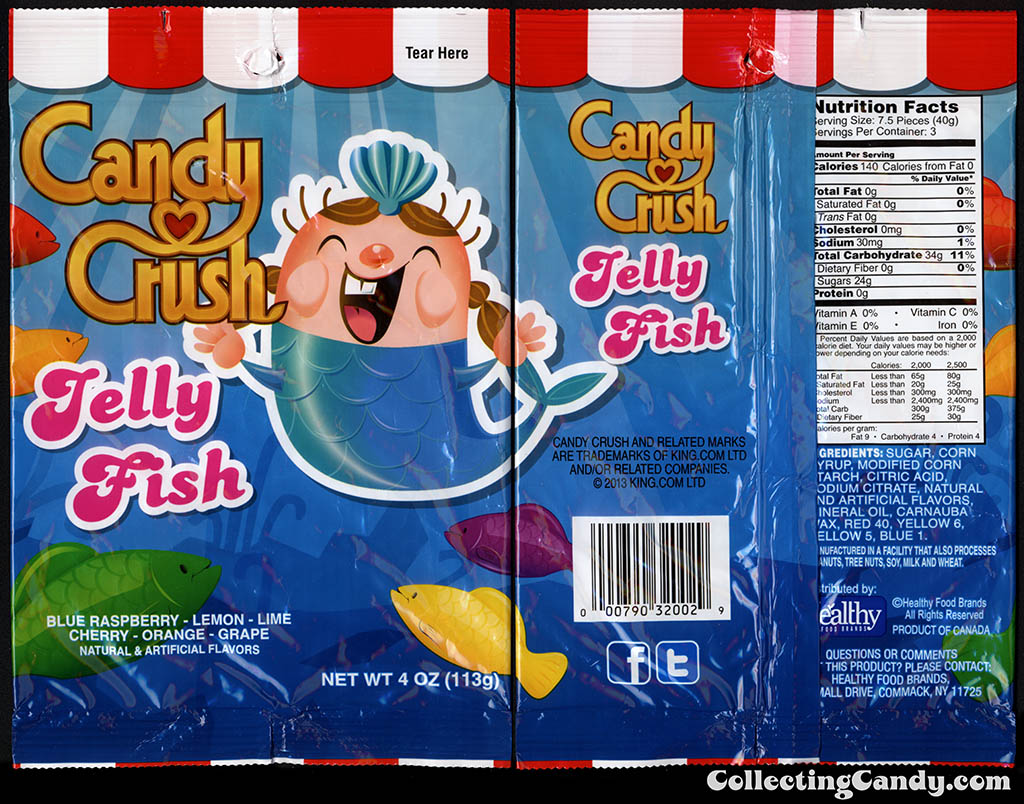 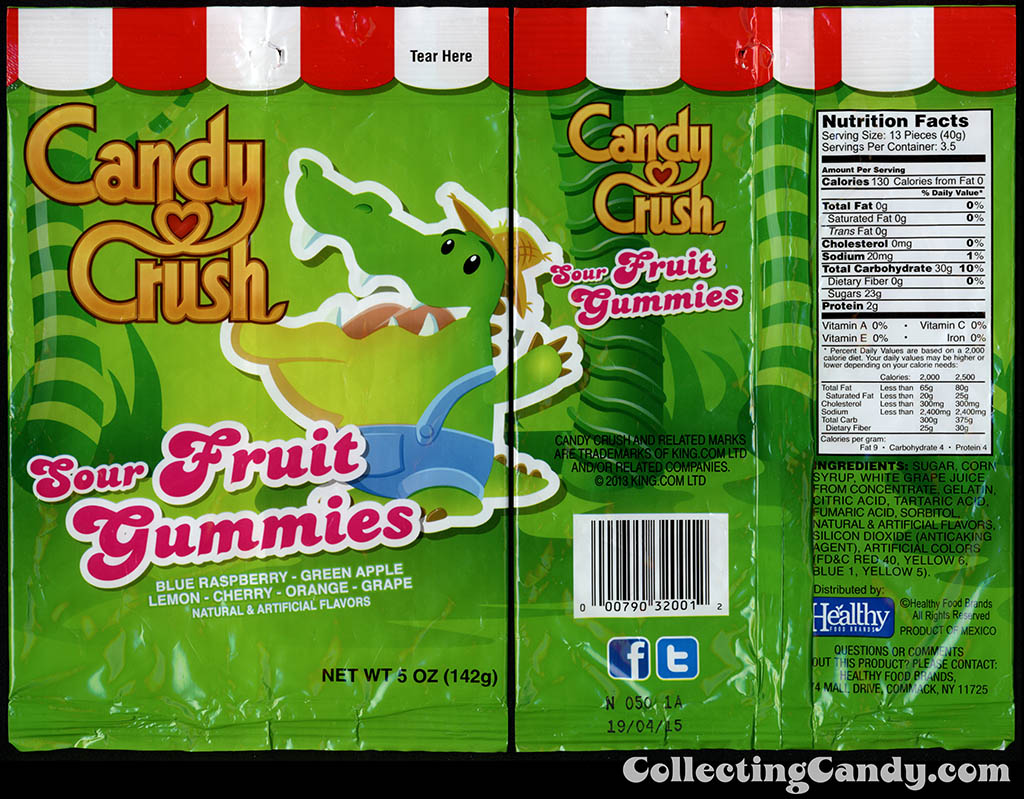 That’s all of them and everything I’ve got to share on the Candy Crush candy lineup and its special Halloween Color Bombs box release.  I’ll likely be back to cover this brand in December as I hear they’re going to feature a Candy Crush abominable snowman on the Christmas seasonal box!

A New York City based writer, editor and sometimes actor. After spending much of the 1990′s in the comic book business helping tell the stories of Marvel Comics’ X-Men as series editor, he has since split his time between developing his own entertainment properties while still consulting and working on others. Having been described as “the Indiana Jones of lost and forgotten candy”, Jason is one of the country’s premier candy collectors and historians with his discoveries appearing in countless blogs, magazines, newspaper articles, and books. Always happy to share his knowledge and unique perspectives on this colorful part of our popular culture, Jason has consulted with New York’s Museum of Food and Drink and has also been a featured guest on Food Network’s Heavyweights, France’s M6 Capital, and New York’s TheActionRoom.com. My Google Profile+
View all posts by Jason Liebig →
This entry was posted in Boxed, Chocolate, CountdownToHalloween, Gummies, Halloween, Holiday and tagged candy collecting, candy collection, candy collector, Candy Crush, candy wrapper collection, candy wrapper collector, collectible, collecting candy, confectionery, confections, Halloween, iphone, licensed, packaging, seasonal, sweets, video game, vintage candy wrapper, wrapper. Bookmark the permalink.