For today’s contemporary entry in our confectionery Countdown to Halloween, I’m excited to present a piece I picked up last year, and one I had to go to some lengths to acquire.  You see, this wasn’t something I was able to pick up at one of my local retailers.  In fact, I had to order these from a UK store, have them delivered to a friend in England, and then have that friend mail them to me here.

I don’t recall where I first heard about Sour Patch Kids Heads & Bodies but when I did, I knew I had to track them down.  My first call was to the UK branch office of CollectingCandy.com (located in Norwich, England), where my good friends Liz and Jonny have been invaluable in tracking down so many of the British confectionery  treasures I seek.

Yet in spite of some furious searching, their hunts came up empty as they couldn’t find a single one of these decapitated delights.

So it was off to AmazonUK, where I was able to finally order some – though I could only have them delivered to a United Kingdom address.  So off to Norwich they went, and from there they were packaged up once again and sent across the ocean to me here.

Upon opening that well-traveled box, I finally had my Sour Patch Kids Heads & Bodies – and I was not disappointed.   Here they are:

I love the graphic of the bat flying away with one of their heads.  Pretty classic stuff.  From the Amazon UK site, here’s a promotional image of a full display box: 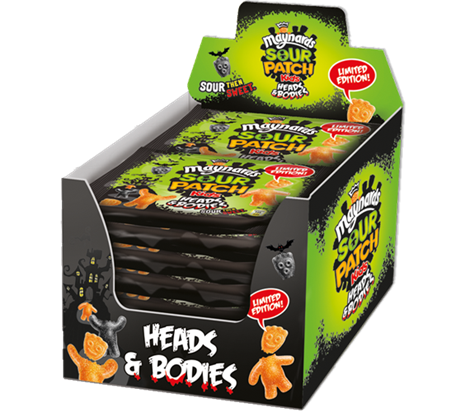 A limited edition release for the 2013 Halloween season, I assumed these might return this year.  Yet after a bit of cursory searching online it doesn’t appear as if they’re available this time around, so they may end up being a truly limited edition after all.

Presenting these Sour Patch Kids Heads & Bodies reminds me of the other fun Sour Patch Halloween releases I’ve previously covered.  First up were the Zombie Sour Patch Kids released in Canada.  After initially missing out on them, a buddy I’ve mine hooked me up with a box: 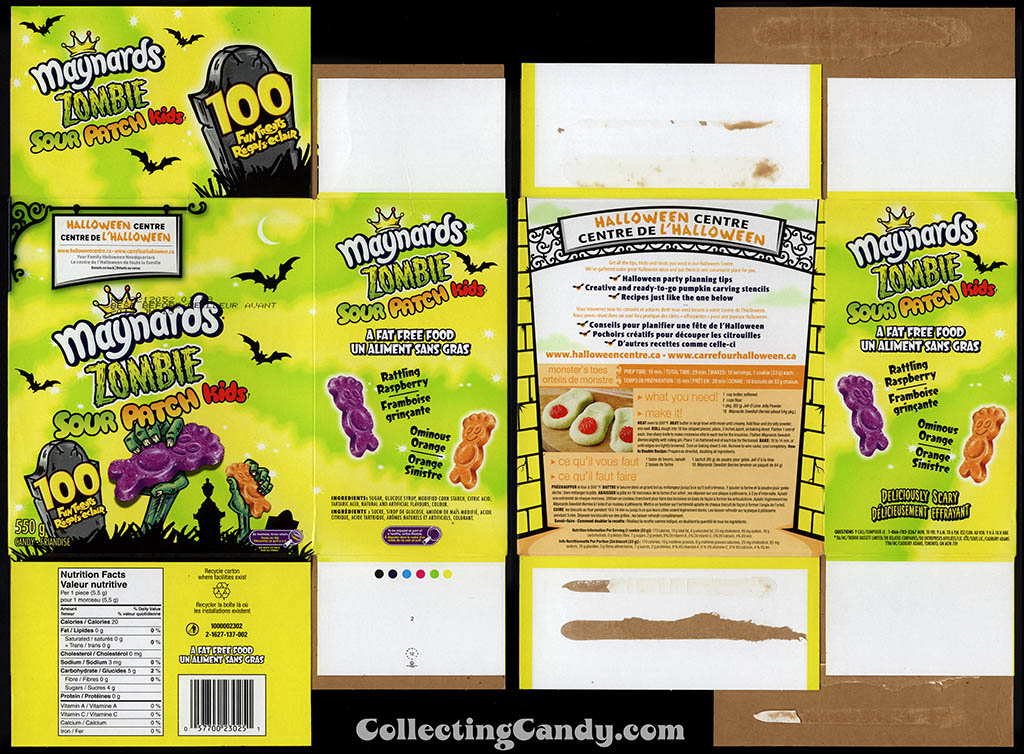 And of course there were the USA release of Sour Patch Zombies Kids.  First put on sale in 2012, these have returned the last two Halloween seasons – so they can be found on store shelves currently this season: 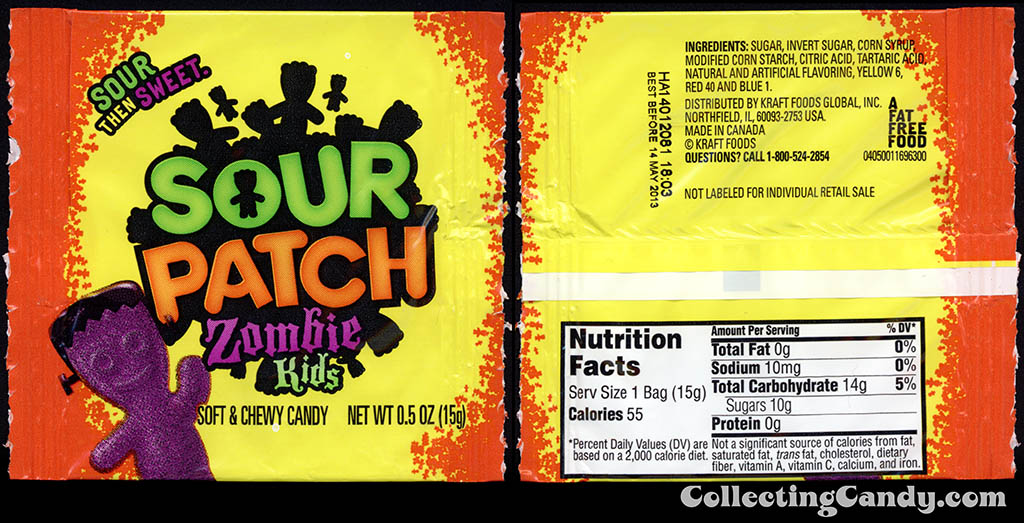 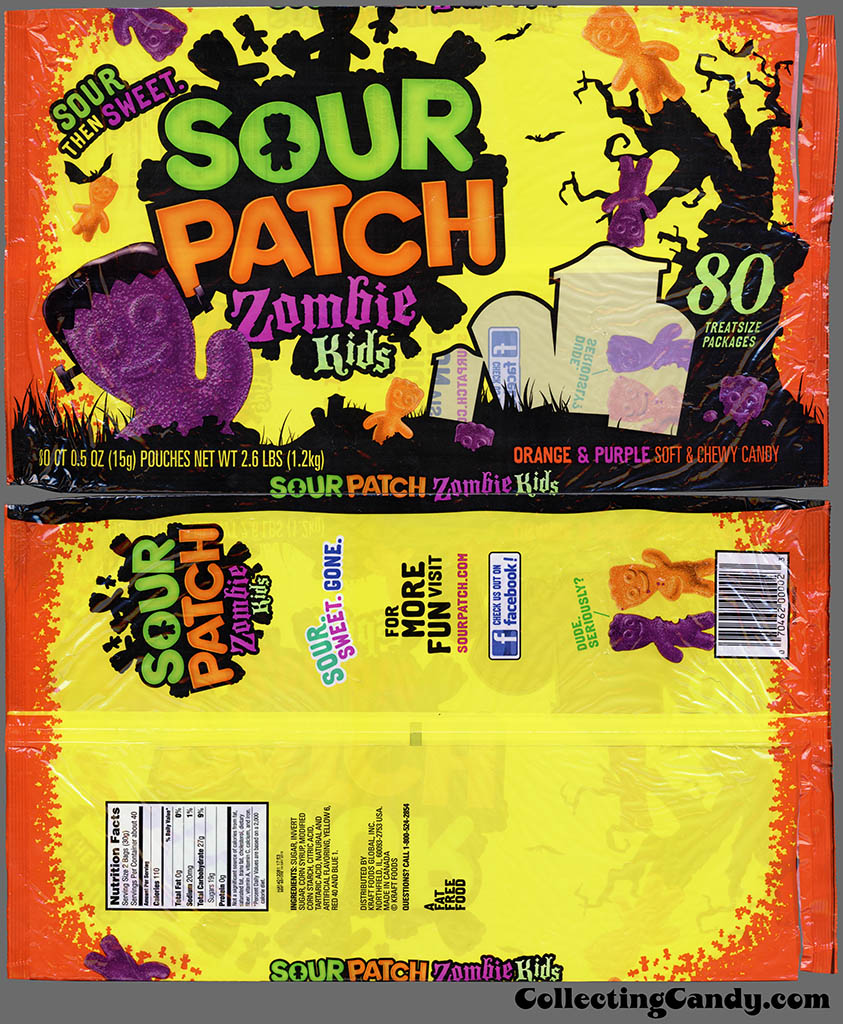 And that’s everything I’ve got to share today on Sour Patch Kids Heads & Bodies as well as their Zombie-related Sour Patch brethren.  See you next time!

A New York City based writer, editor and sometimes actor. After spending much of the 1990′s in the comic book business helping tell the stories of Marvel Comics’ X-Men as series editor, he has since split his time between developing his own entertainment properties while still consulting and working on others. Having been described as “the Indiana Jones of lost and forgotten candy”, Jason is one of the country’s premier candy collectors and historians with his discoveries appearing in countless blogs, magazines, newspaper articles, and books. Always happy to share his knowledge and unique perspectives on this colorful part of our popular culture, Jason has consulted with New York’s Museum of Food and Drink and has also been a featured guest on Food Network’s Heavyweights, France’s M6 Capital, and New York’s TheActionRoom.com. My Google Profile+
View all posts by Jason Liebig →
This entry was posted in British, CountdownToHalloween, Gummies, Halloween, Sour Candy and tagged candy collecting, candy collection, candy collector, candy wrapper collection, candy wrapper collector, collectible, collecting candy, confectionery, confections, England, gruesome, Halloween, Halloween candy, limited edition, packaging, seasonal candy, Sour Patch, Sour Patch Kids, sweets, UK, United Kingdom, vintage candy wrapper, wrapper, zombies. Bookmark the permalink.