Today I’m taking a crack at a big-time favorite among many of my readers – Sour Patch Kids.  I’d previously touched upon Sour Patch for my Halloween post on Sour Patch Zombie Kids (awesome bit of packaging there).  My reason for posting today is that I recently noticed they’d totally changed up the Sour Patch logos and mascots, and that’s a great time for a collector to take notice.  So let’s do it.

Just so you can see what I’m talking about, here’s a comparison shot of the new packaging style, and the one it replaced: 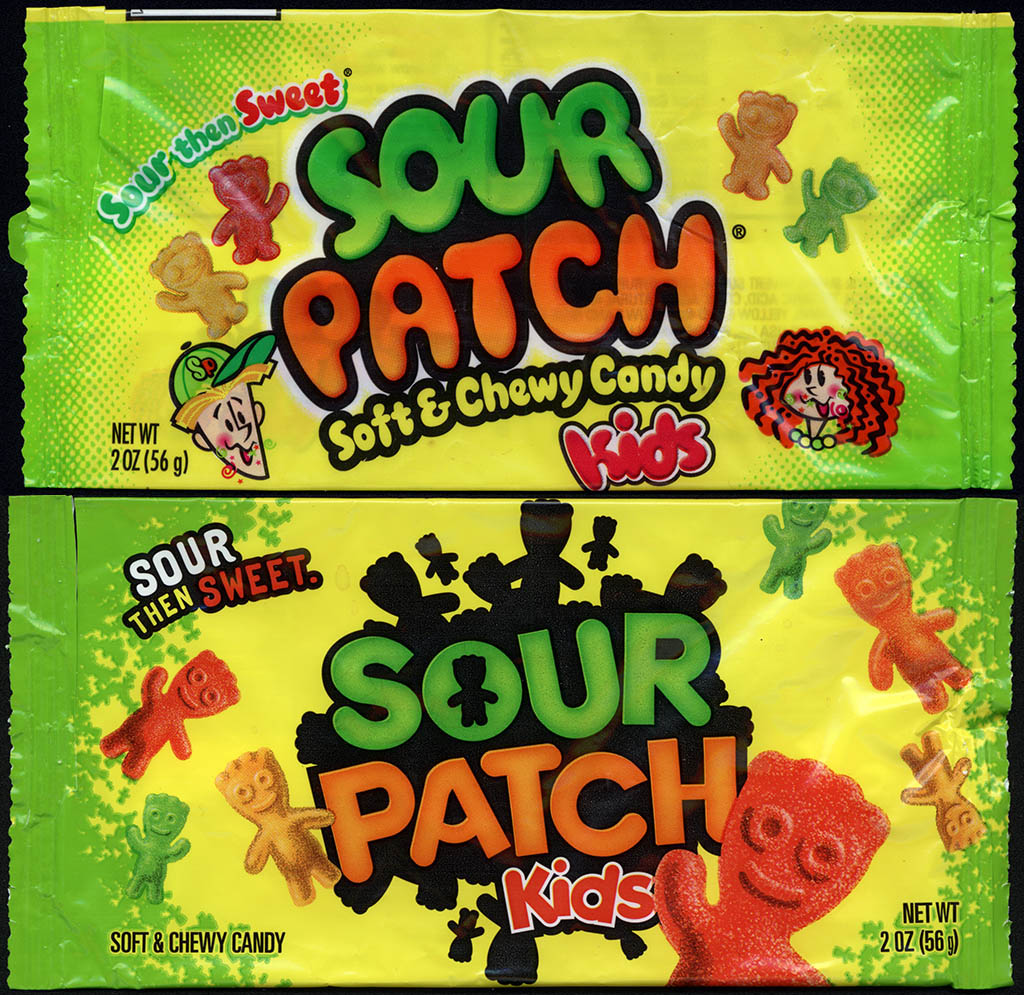 Right now, you can still find the old style of packaging on some store shelves, but soon they will all be replaced by the snappy new versions.  And those old packs will fade into candy history. But before I get to the topic of this years’ packaging change, I want to show you as much as I can of their history.

Though I don’t have any of those 1980’s packages to show, I do have this early trade ad from 1993.  The package style here might be very close to what was used for those first 1980’s Sour Patch packs. 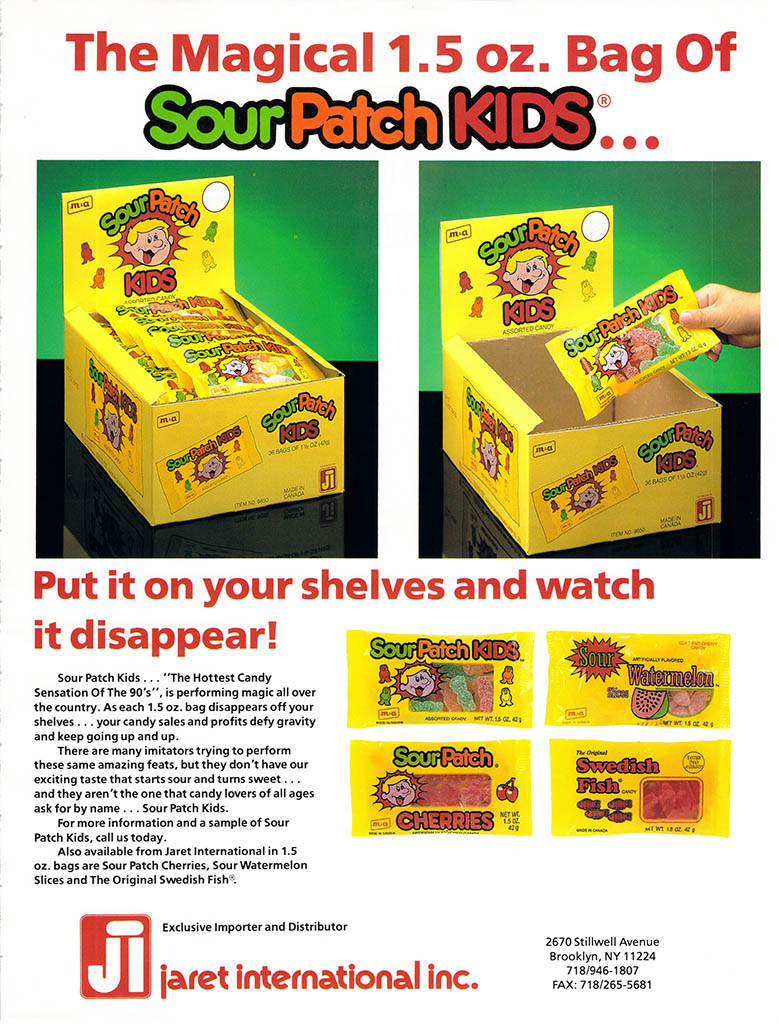 For reference, here’s a close-up of the Sour Patch Kids pack from the ad: 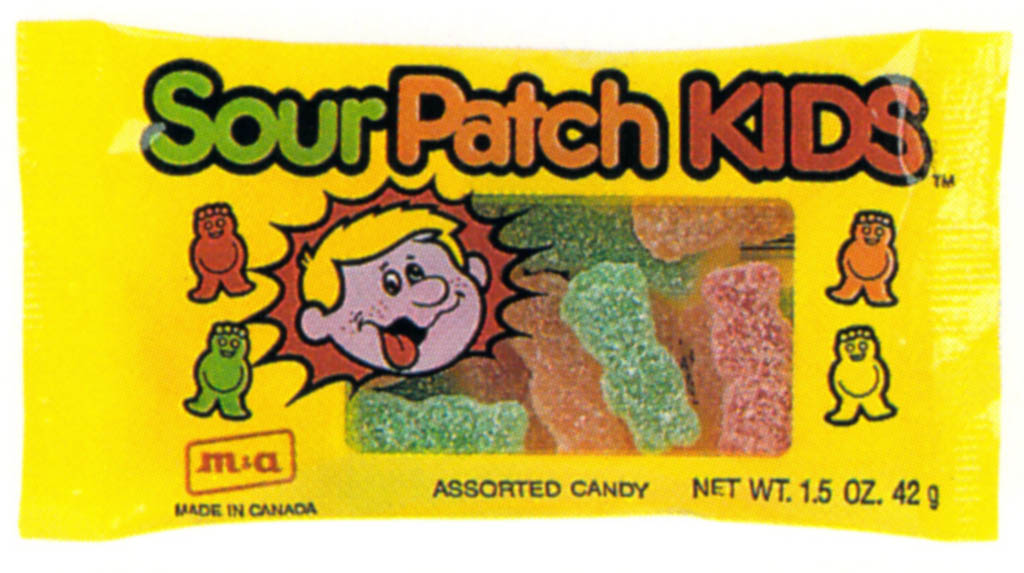 Jumping ahead a few years, the Sour Patch Kids logo would become a bit more animated and arched, and the kid would get a ball cap, which he would retain for quite some time. 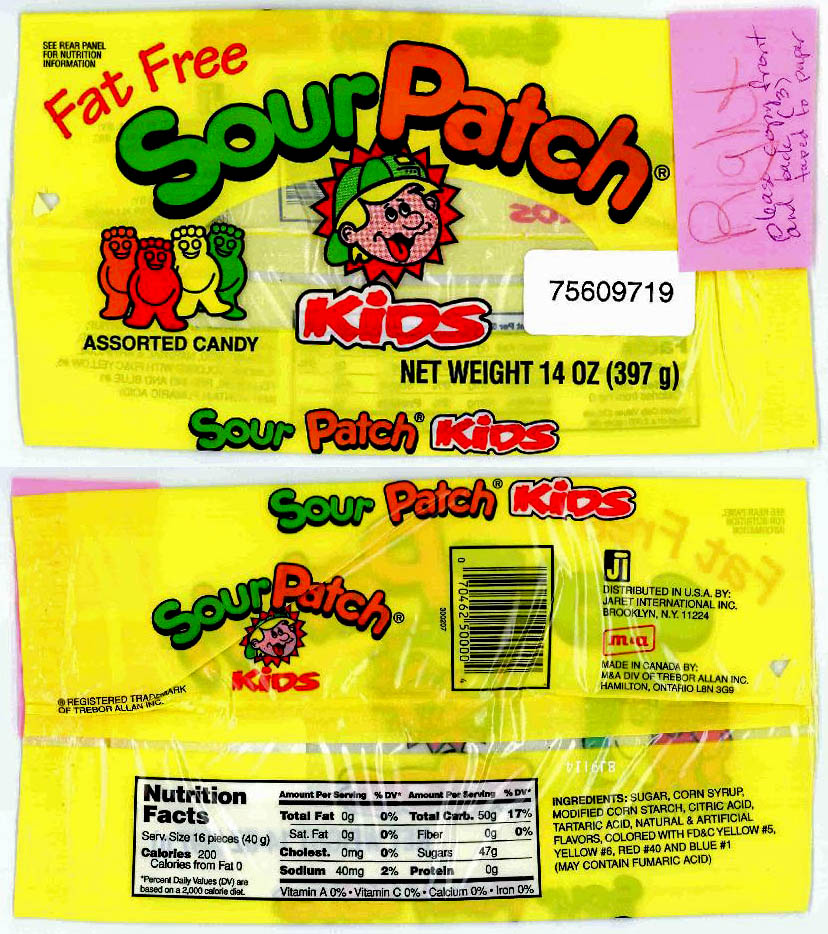 From this point in the history of the brand, I hit a bit of a research gap, so I have to guess a bit.   At some point in the late 1990’s, the brand (or perhaps all of Jaret International) was acquired by Cadbury-Adams.  By that time, the pack style that we still had in 2010 was what was being used.

I want to show all of the changing packs, but first I’d like to show a few key pieces that reveal a little bit about how the current mascot came into play.

Here’s a Sour Patch Watermelon box from 2010, which shows that, in general, the packaging was still using the fruit mascots they had been. 2010 was also the first year that Kraft Foods was credited as the producers of the brand (after they’d purchased Cadbury): 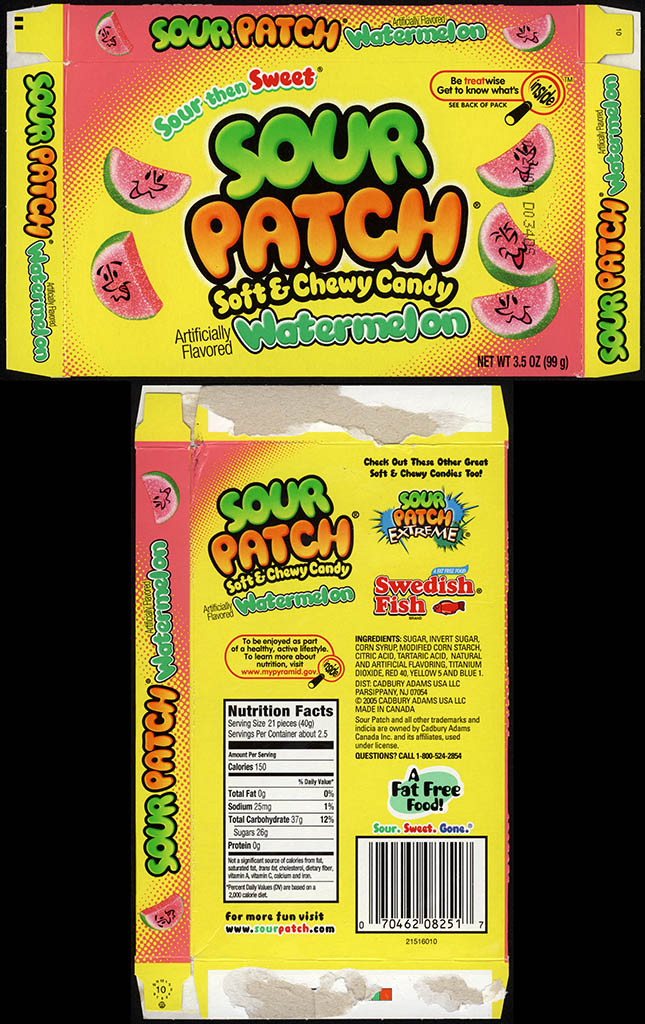 But in the previous year, we get an early hint at the Sour Patch Kids candy mascot that would soon dominate all packs.  Here is an Easter-themed box from 2009: 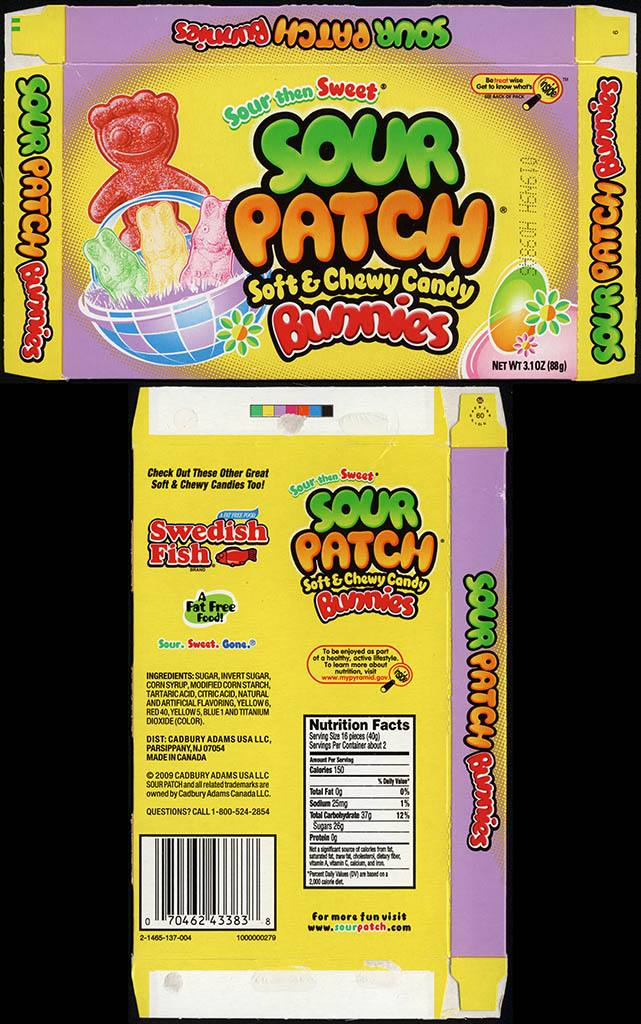 That 2009 box brings the candy-mascot to the forefront, but the style of illustration is not quite what we’d eventually get (his eyes are filled-in, he has an extra line around his body).  I first noticed the new and current mascot on Sour Patch’s 2011 video game promotion: 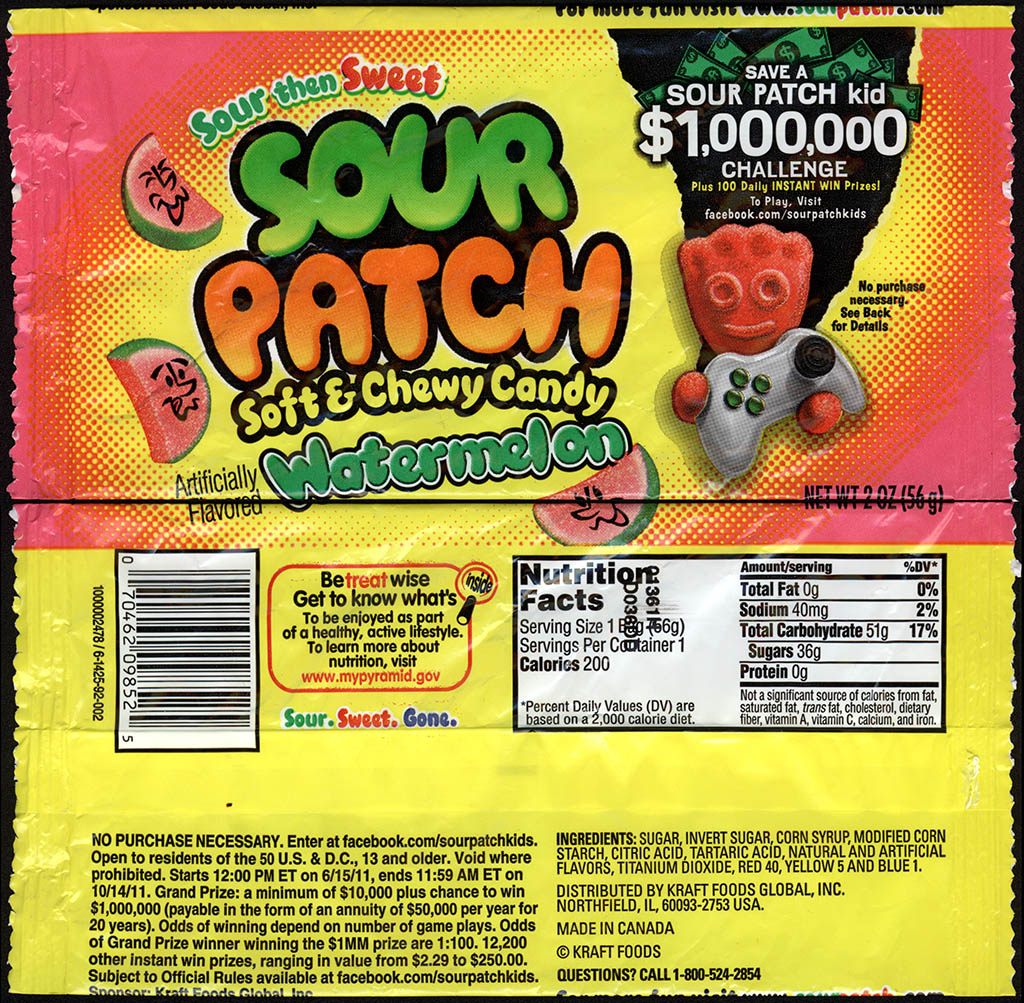 The revised mascot must have really worked, because I recall that package catching my eye and attention.  Before this, I hadn’t given Sour Patch Kids much thought… and hadn’t picked up any packages for my collection, either.  So clearly they were doing something right with this new version (though I am quite fond of the old versions now, too).

This all brings us up to 2012, when the candy mascot first seen in current form in 2011 now graces all Sour Patch packaging.  I’m going to share each flavor in 2011 version along with its 2012 package, so they can be easily contrasted.  There are seven standard-size pack flavor variations. 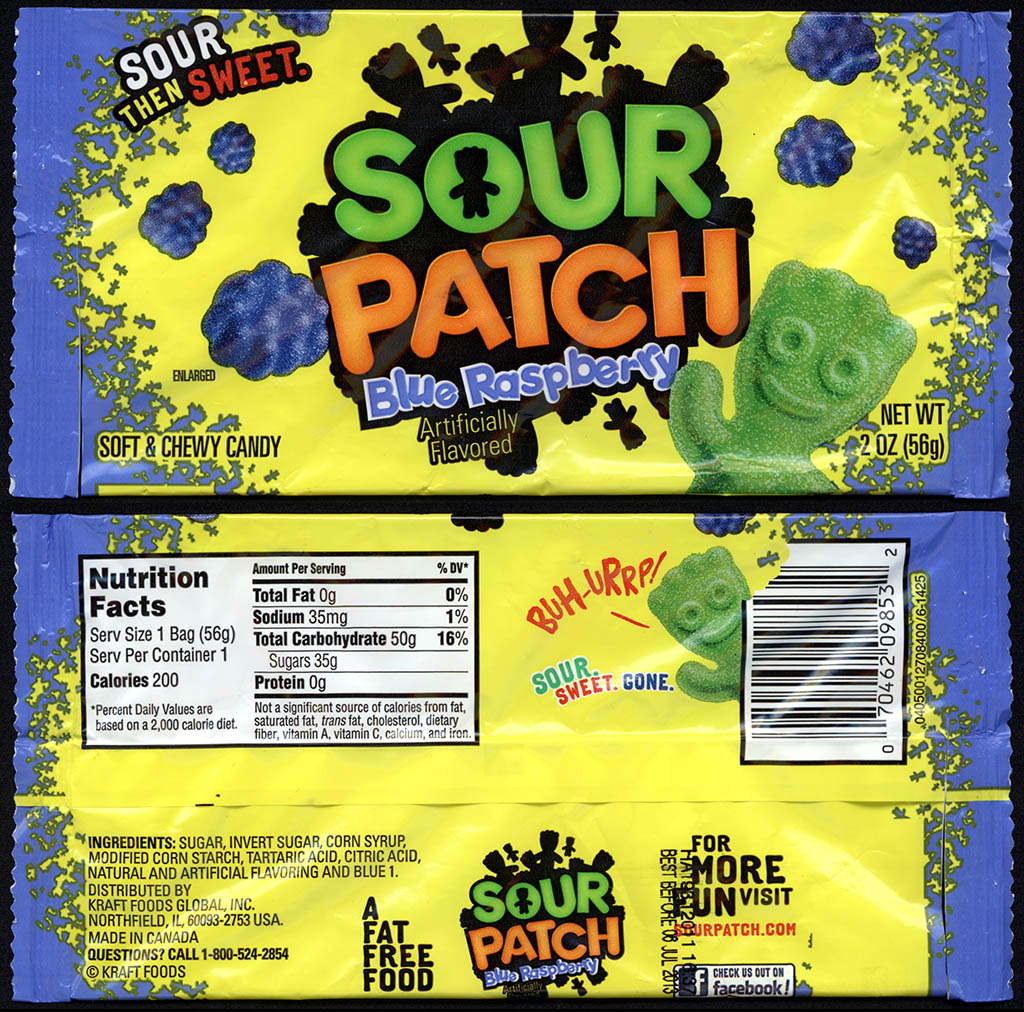 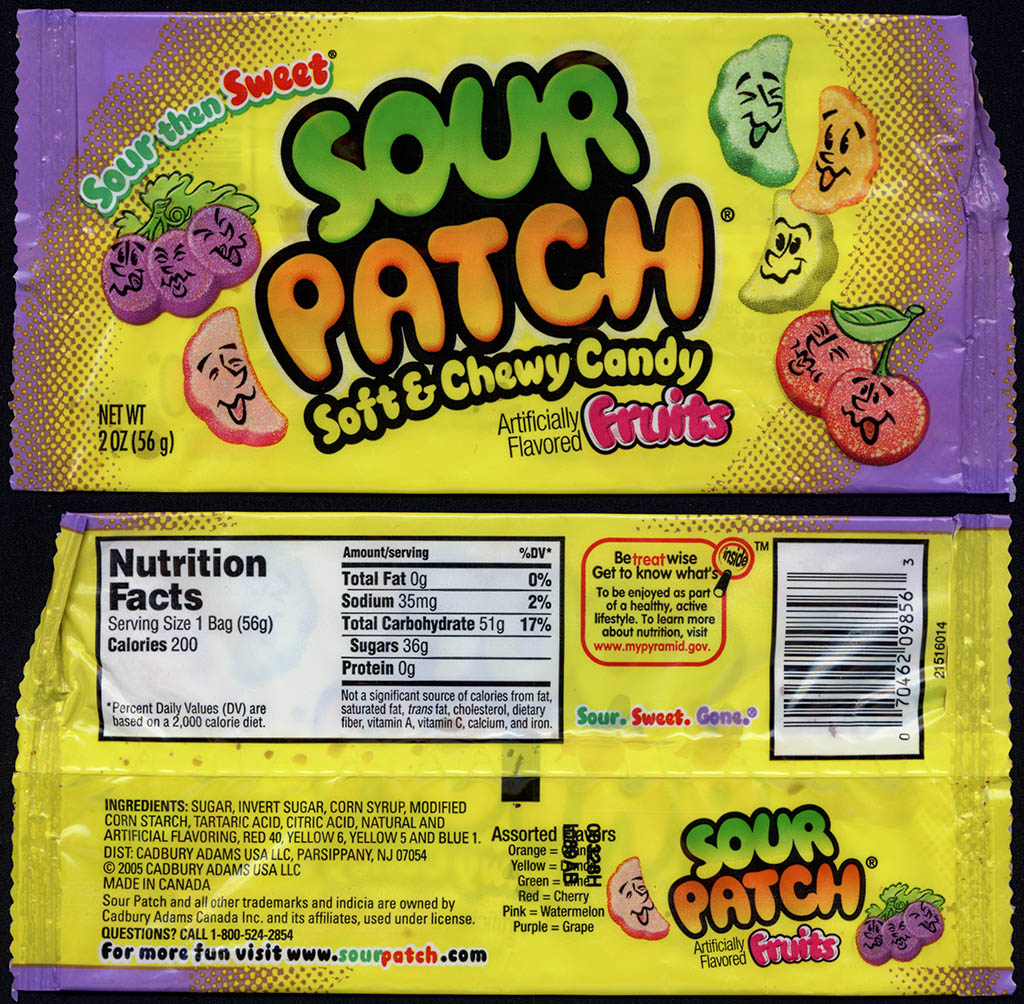 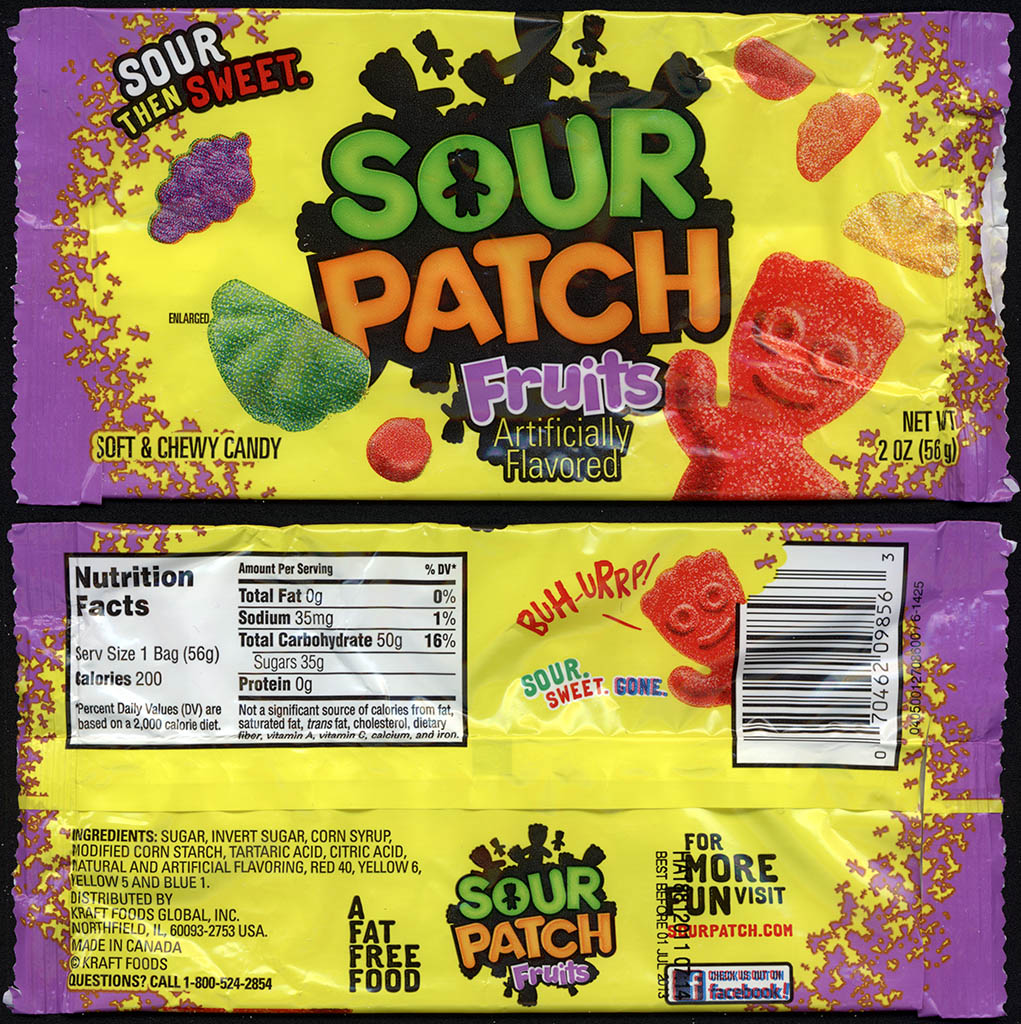 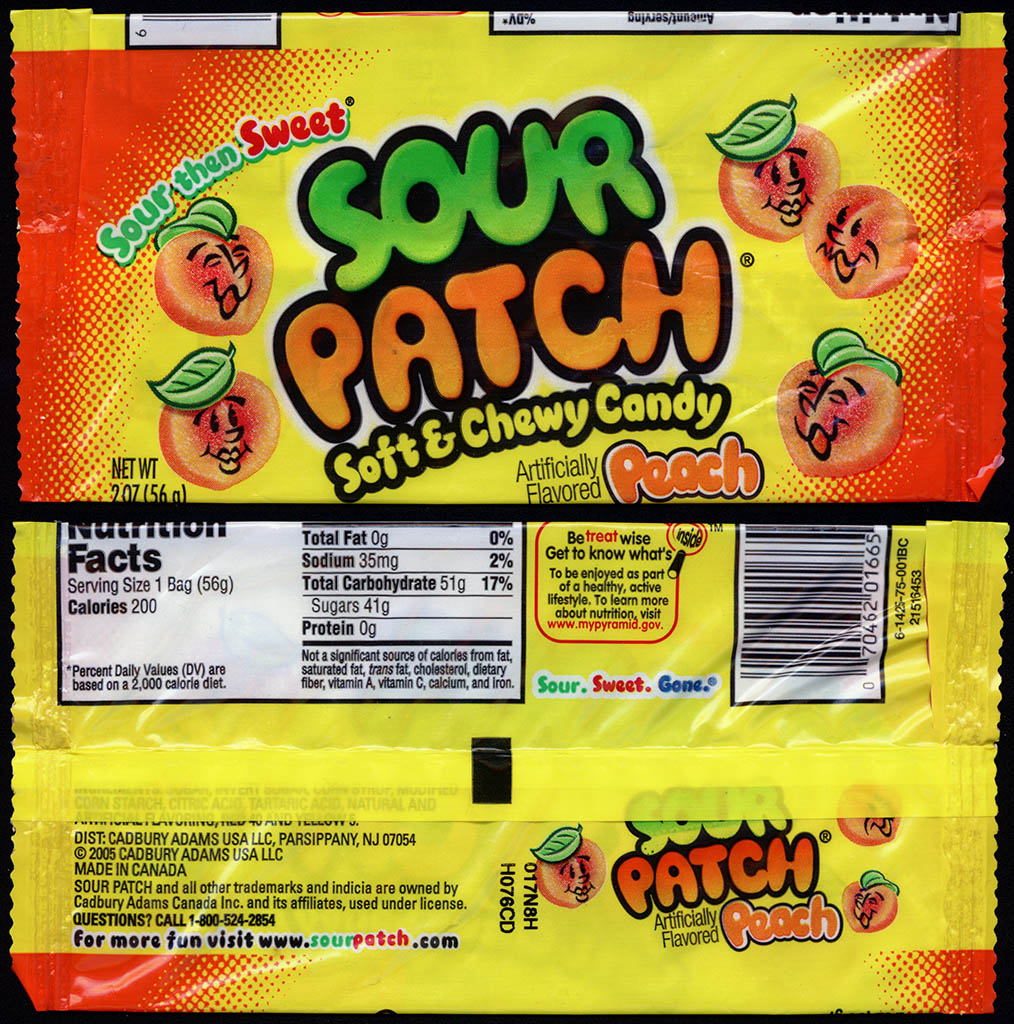 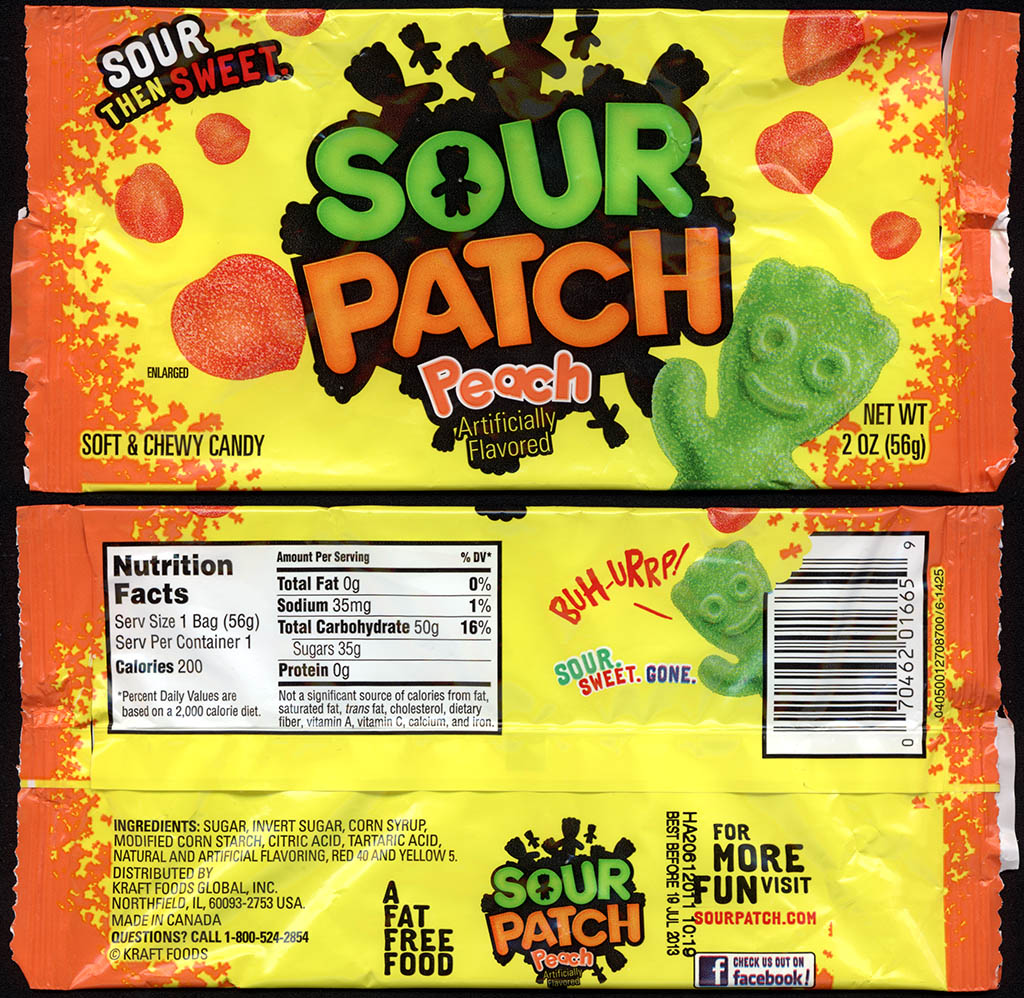 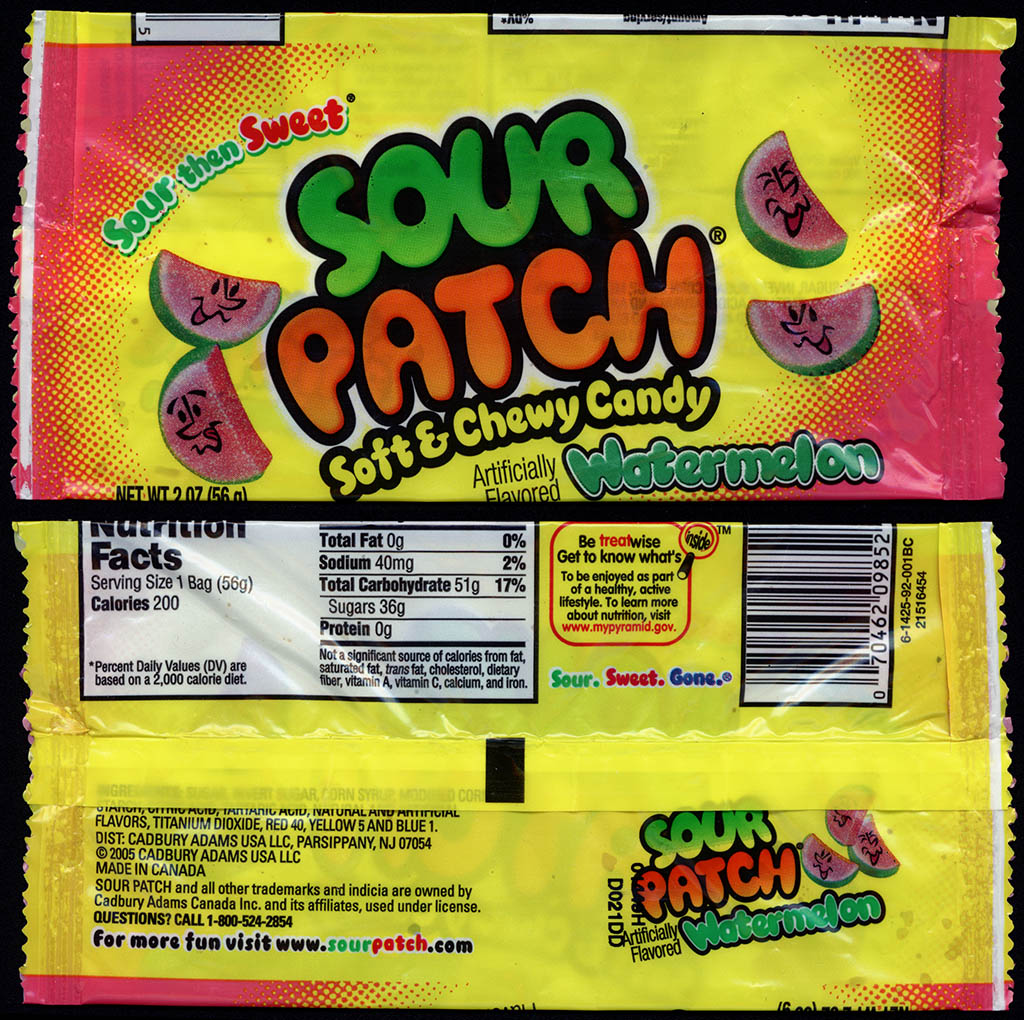 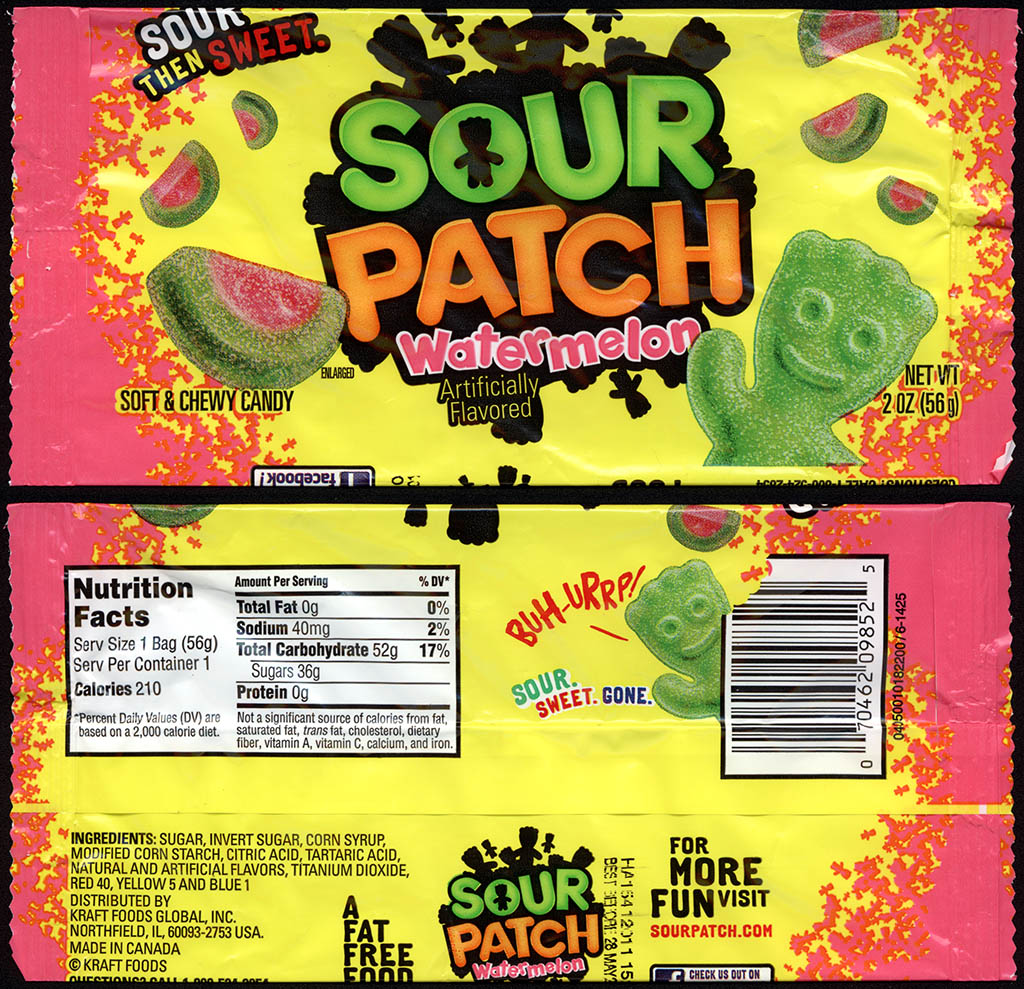 Watermelon appears to be a popular flavor, as it’s one of the only versions also sold in theater sized boxes: 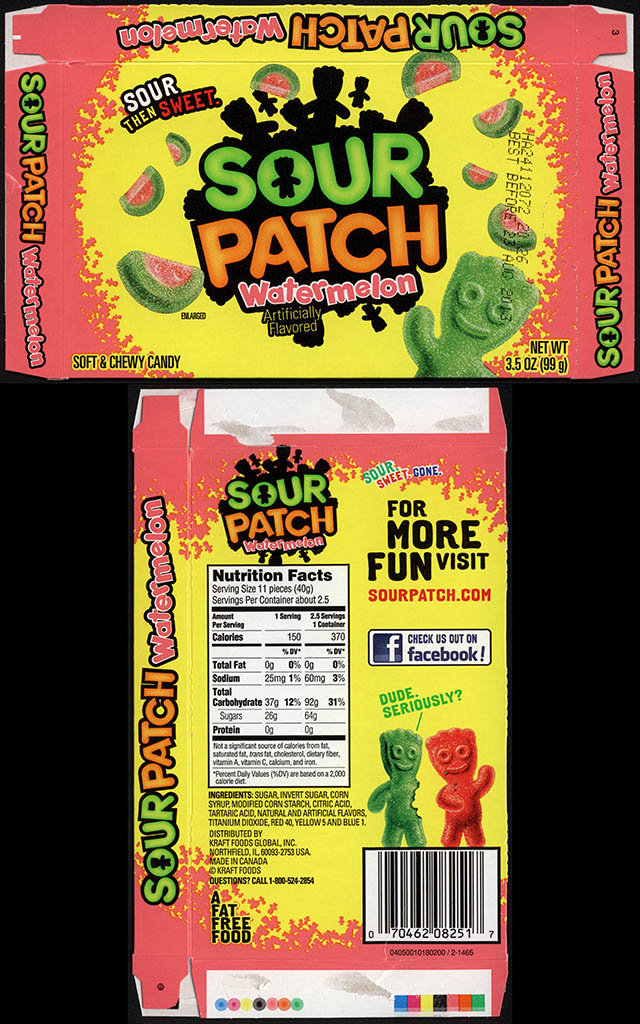 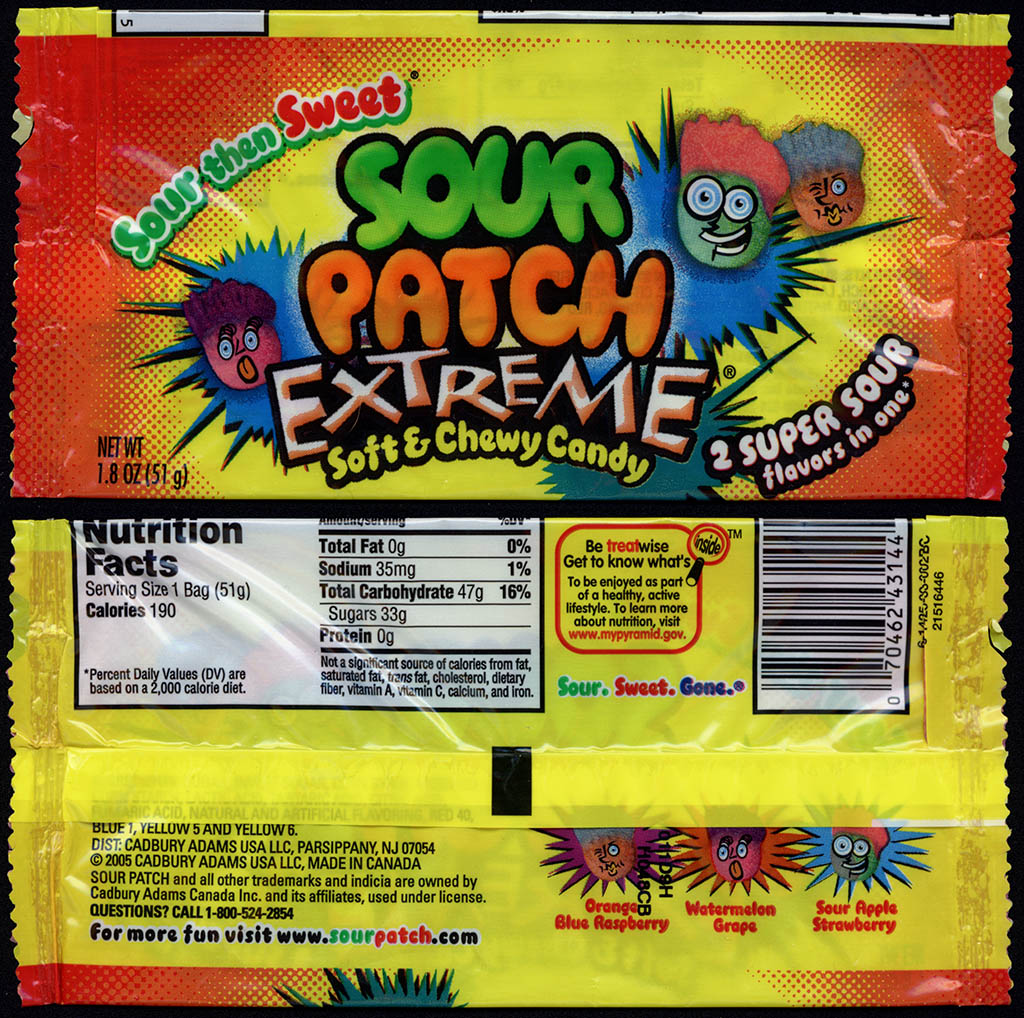 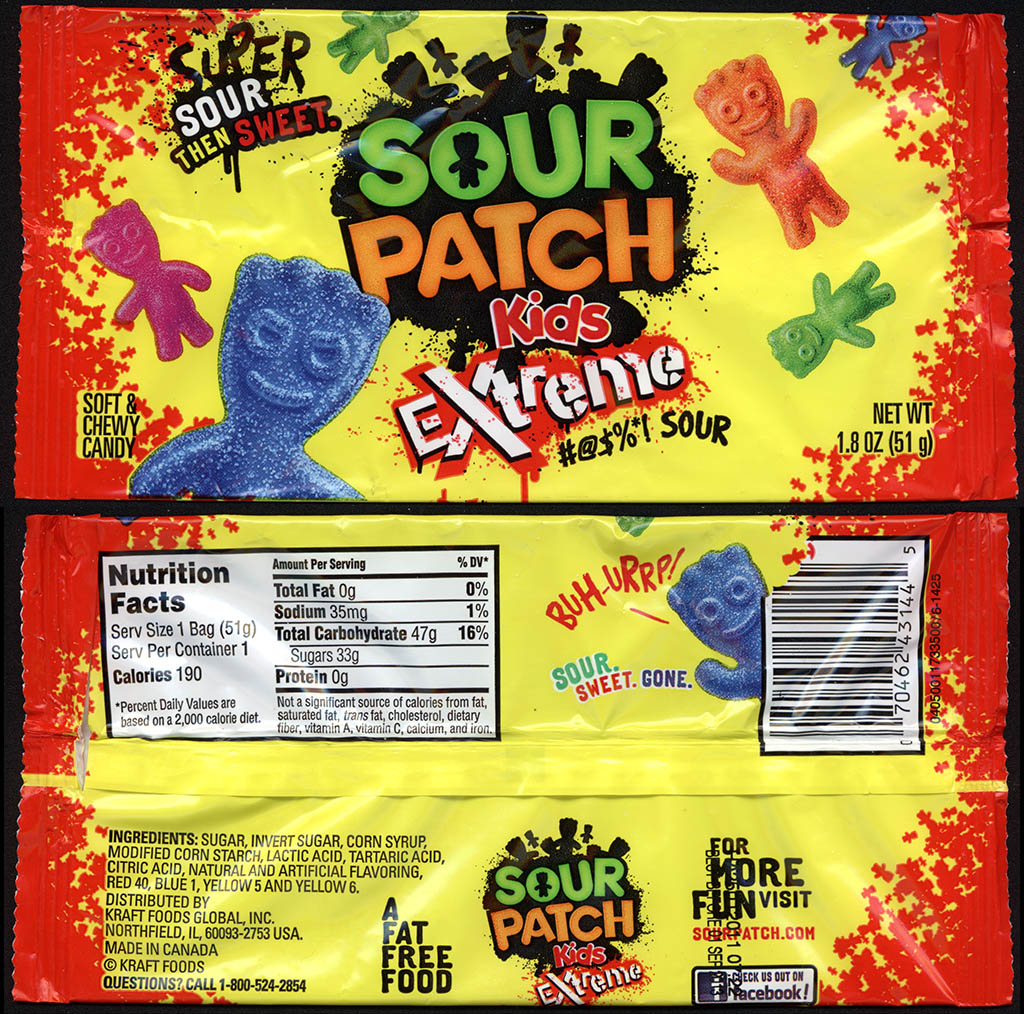 I also have a larger pack size for the Extreme flavor: 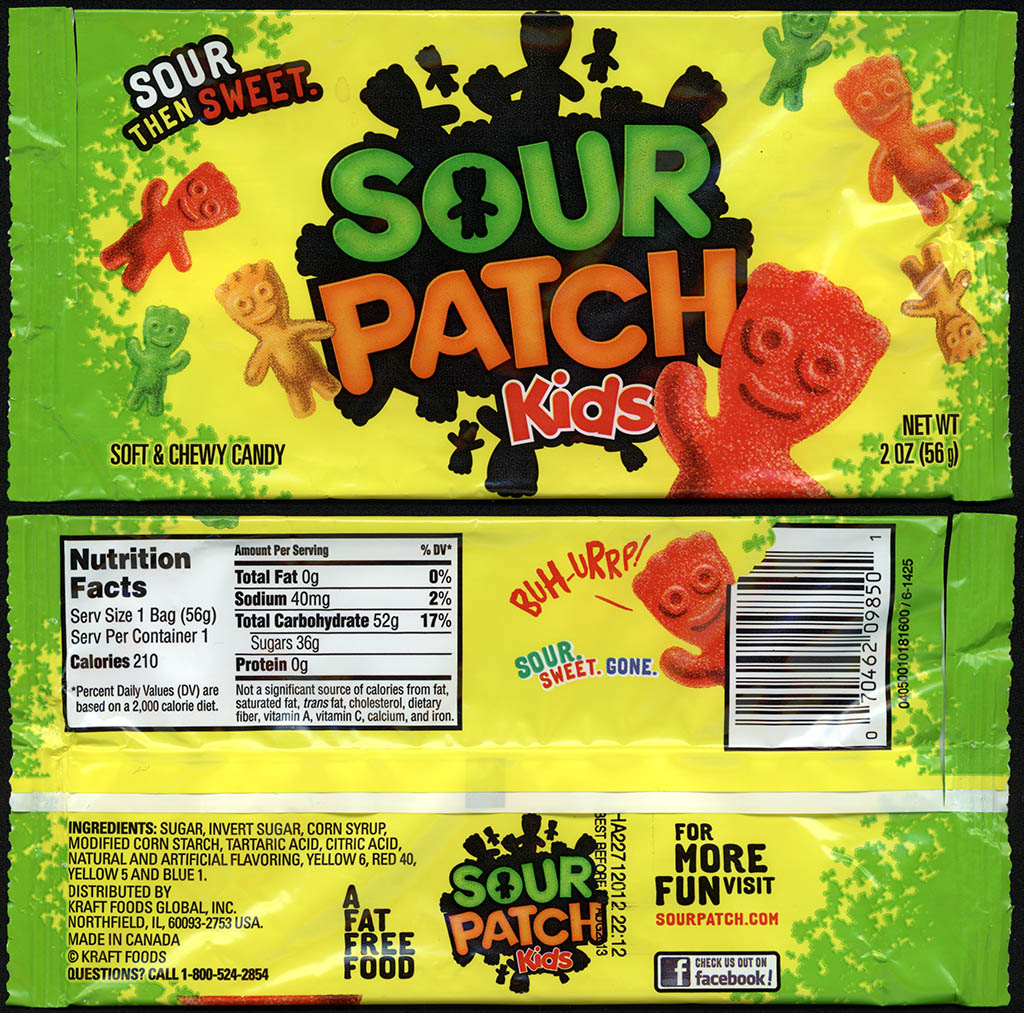 Last up on the assortment of flavors to be shown is the dedicated cherry-flavored pack.  I saved it for last because from what I’ve been able to discern, the cherry flavor was retired along with the old packaging style.  It has been replaced by a new flavor called Berries.  Here they are:

Here’s the Berries that now replace Cherry as the seventh flavor pack: 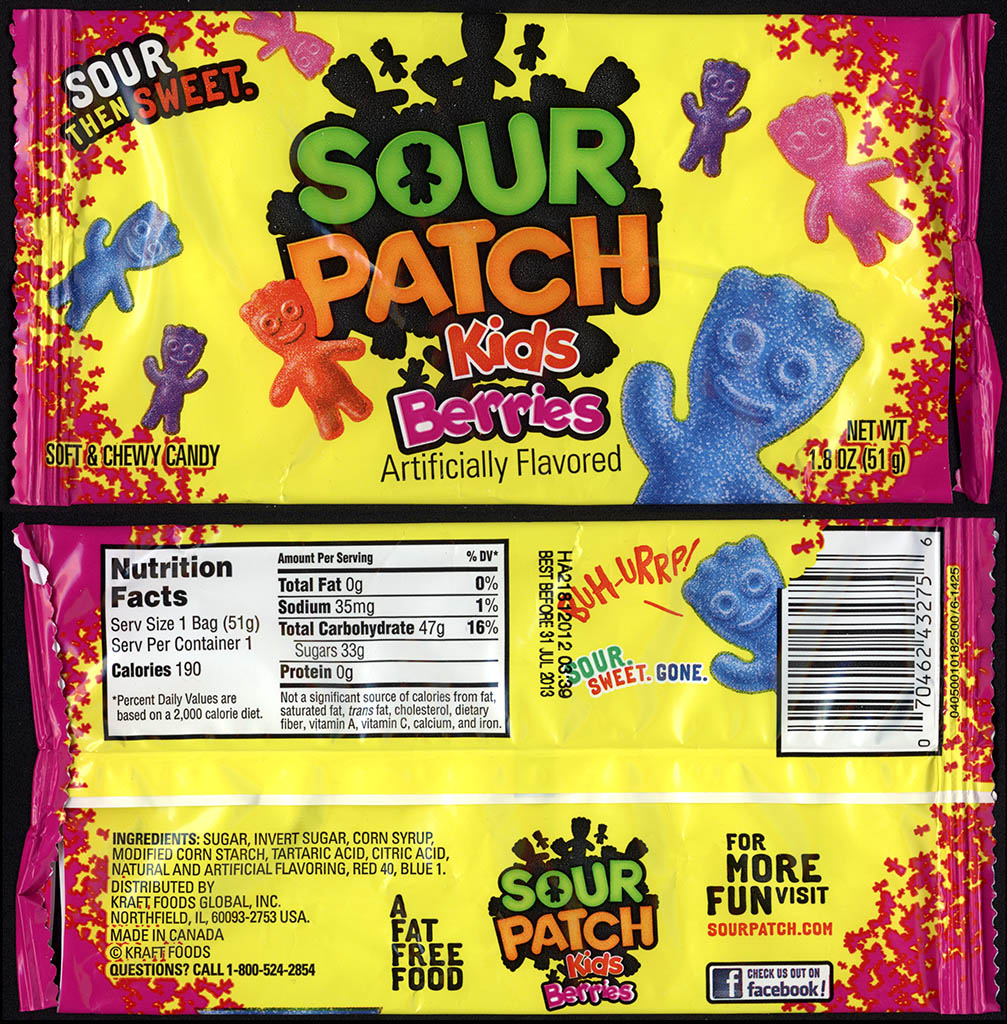 Berries is a flavor that is certainly being promoted, and I found one of the larger packs featuring the flavor: 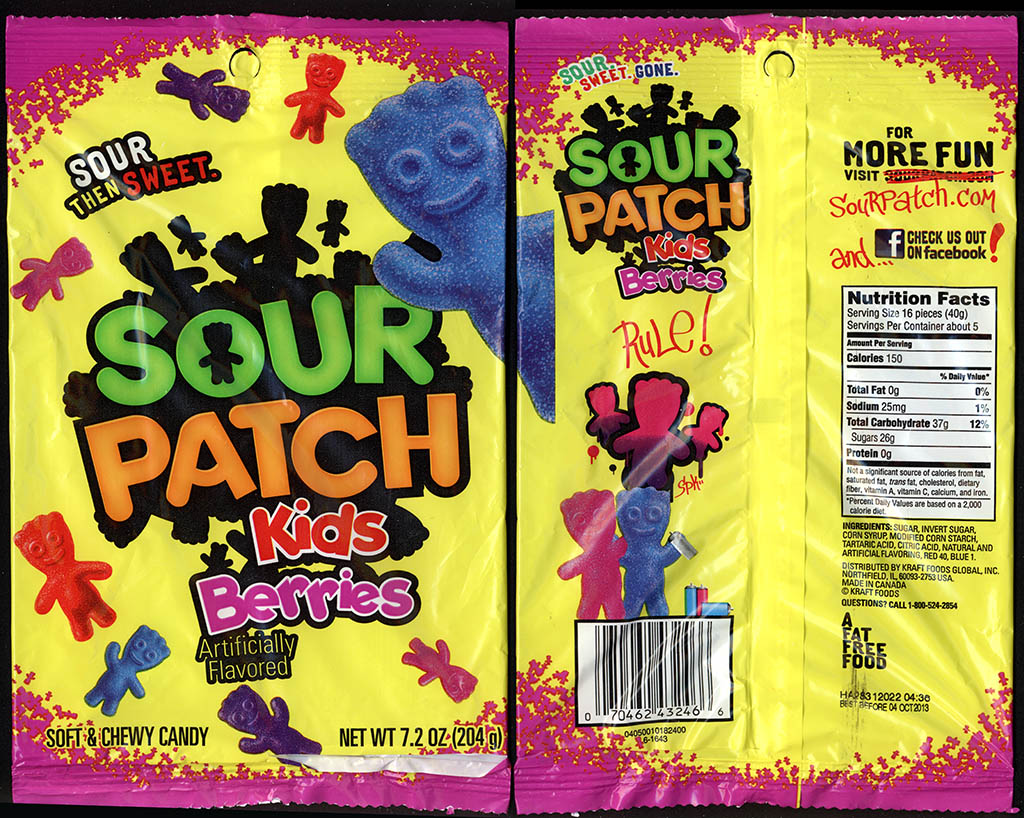 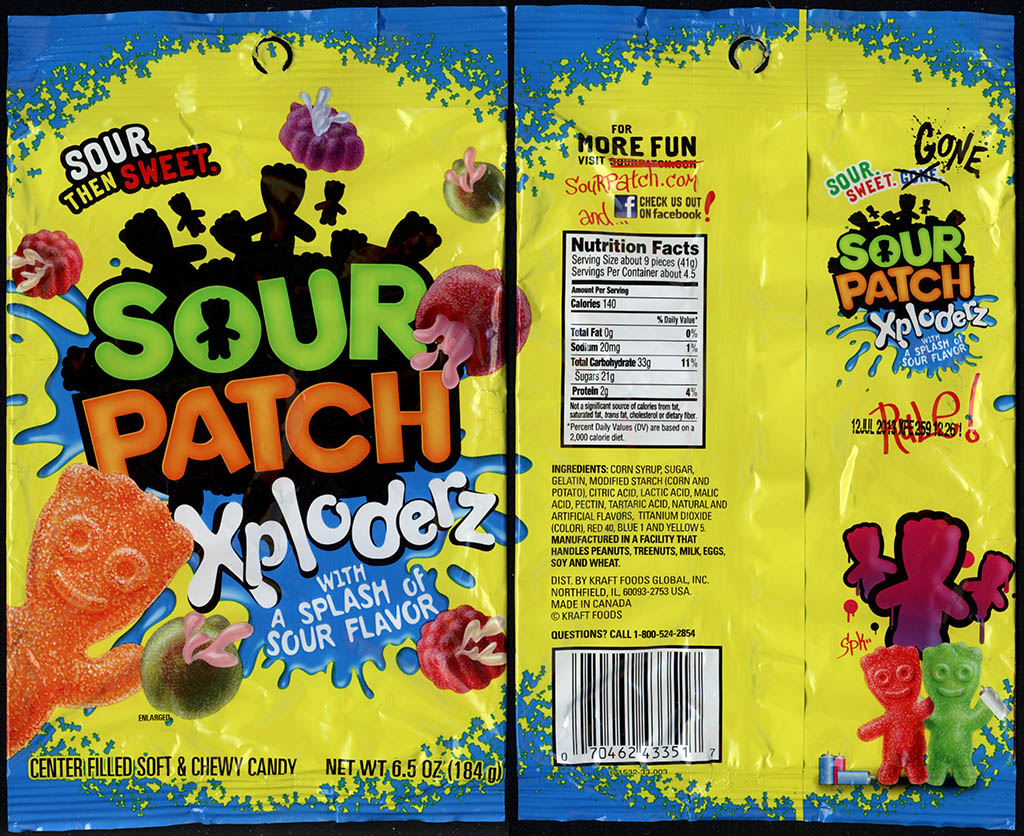 There’s also this Christmas-themed box that I just picked up last week up in Syracuse, New York: 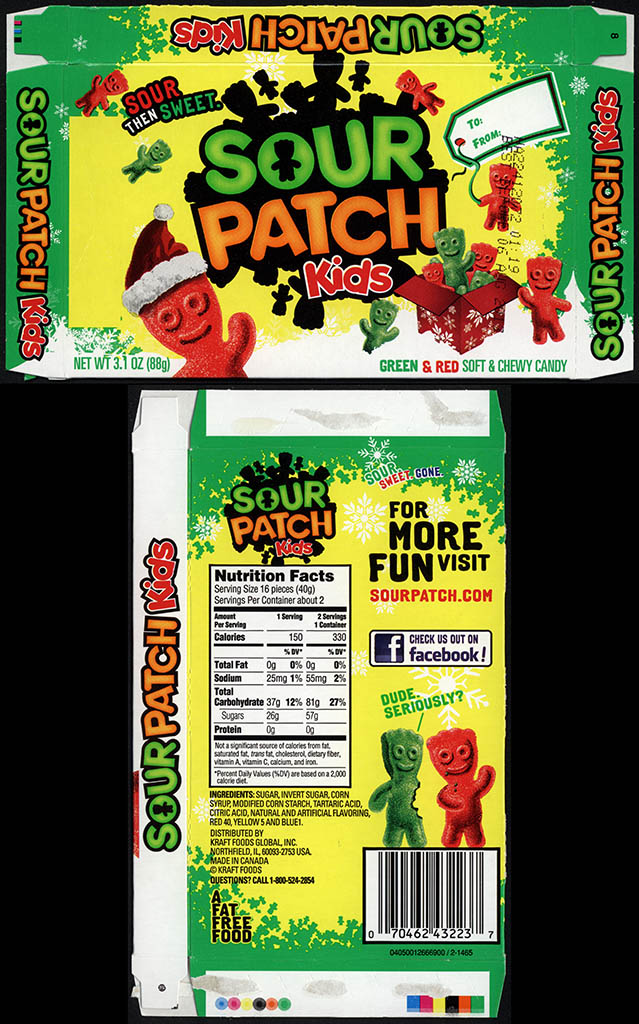 My pal Cybele over at CandyBlog does a great write-up of a strange Sour Patch flavor extension that was out in 2009 for a short time.  Sour Patch Kids Chillerz, which purported to mix a minty flavor with the fruit and sour.  You can check it out here.

There have likely been many shapes and short-lived variants put out under the Sour Patch umbrella over the years that I failed to cover here.  That just means I’ve got plenty of fun things to hunt for, for years to come.

One piece that I can happily say is in my collection now is the Canadian version of Sour Patch Kids Zombies, called Maynards Zombie Sour Patch Kids.  The Zombie before the name makes all the difference.  Thanks to my Canadian pal and fabulously-talented cartoonist Glen Mullaly, I finally have one of these neat pieces in my hands.

And that’s everything I’ve got to share today with regard to Sour Patch.  I hope you guys liked my look back on this classic sour favorite!  See ya next time!

A New York City based writer, editor and sometimes actor. After spending much of the 1990′s in the comic book business helping tell the stories of Marvel Comics’ X-Men as series editor, he has since split his time between developing his own entertainment properties while still consulting and working on others. Having been described as “the Indiana Jones of lost and forgotten candy”, Jason is one of the country’s premier candy collectors and historians with his discoveries appearing in countless blogs, magazines, newspaper articles, and books. Always happy to share his knowledge and unique perspectives on this colorful part of our popular culture, Jason has consulted with New York’s Museum of Food and Drink and has also been a featured guest on Food Network’s Heavyweights, France’s M6 Capital, and New York’s TheActionRoom.com. My Google Profile+
View all posts by Jason Liebig →
This entry was posted in 1980's, 1990's, Sour Candy and tagged 1980's, 1980's candy, 1990's candy, 80's candy, candy collecting, candy collection, candy collector, candy wrapper collection, candy wrapper collector, collectible, collecting candy, confectionery, confections, packaging, sour, Sour Candy, Sour Patch, Sour Patch Kids, super sour, sweets, vintage candy wrapper, wrapper. Bookmark the permalink.