While going through my archives for the CountdownToHalloween this month, I realized I had a few older Halloween seasonal M&M’s packages I never covered before.  So I gathered them together for today’s post which I think presents a nice look at how M&M’s Halloween packaging has evolved over time.

To start off today’s historical look back, I have an M&M’s “Holiday” package, which was something Mars did in the late 80’s/early 90’s – giving consumers assortments of M&M’s themed for the seasons by color.  I am fairly sure that this predates any actual Halloween themes they used on the large product packages as it also predates their introduction of the M&M’s character mascot family, but I might not be correct on that. 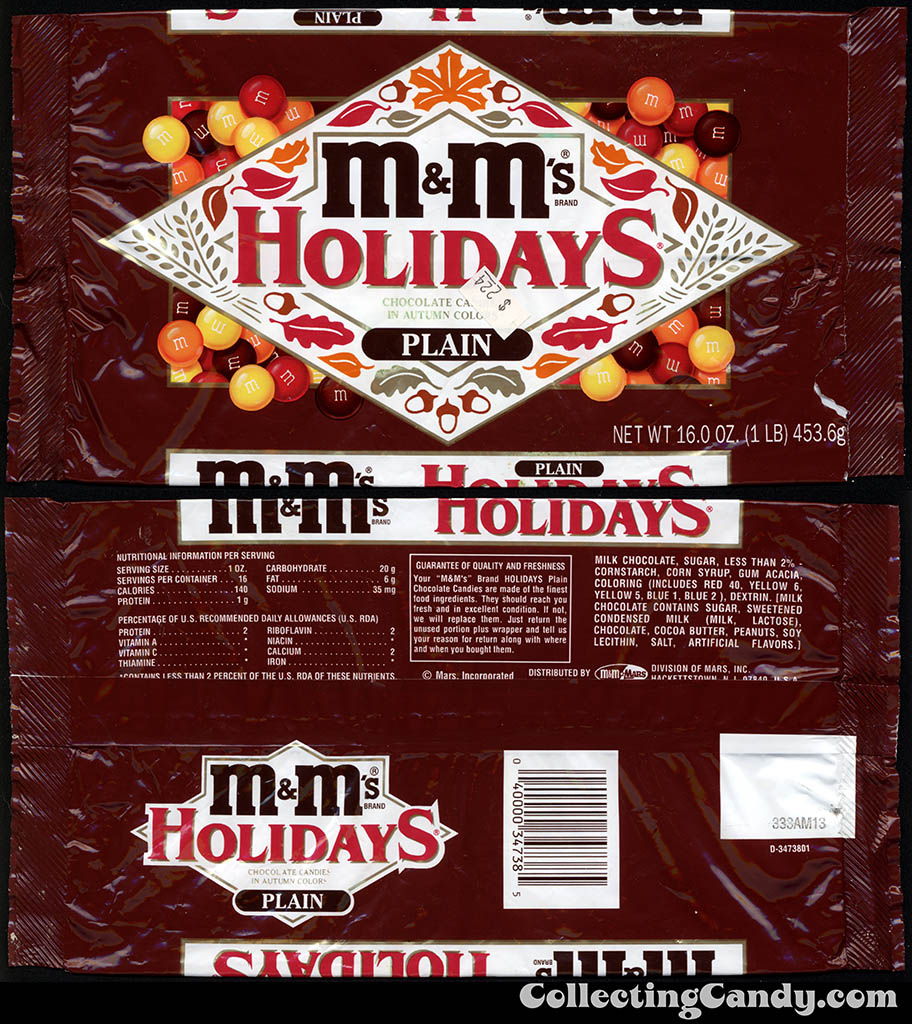 Next up is what I believe to be one of the earliest actual Halloween-themed M&M’s packs – and it’s a fun one featuring a 1990’s M&M’s styled mascot in a witches’ hat and broom. 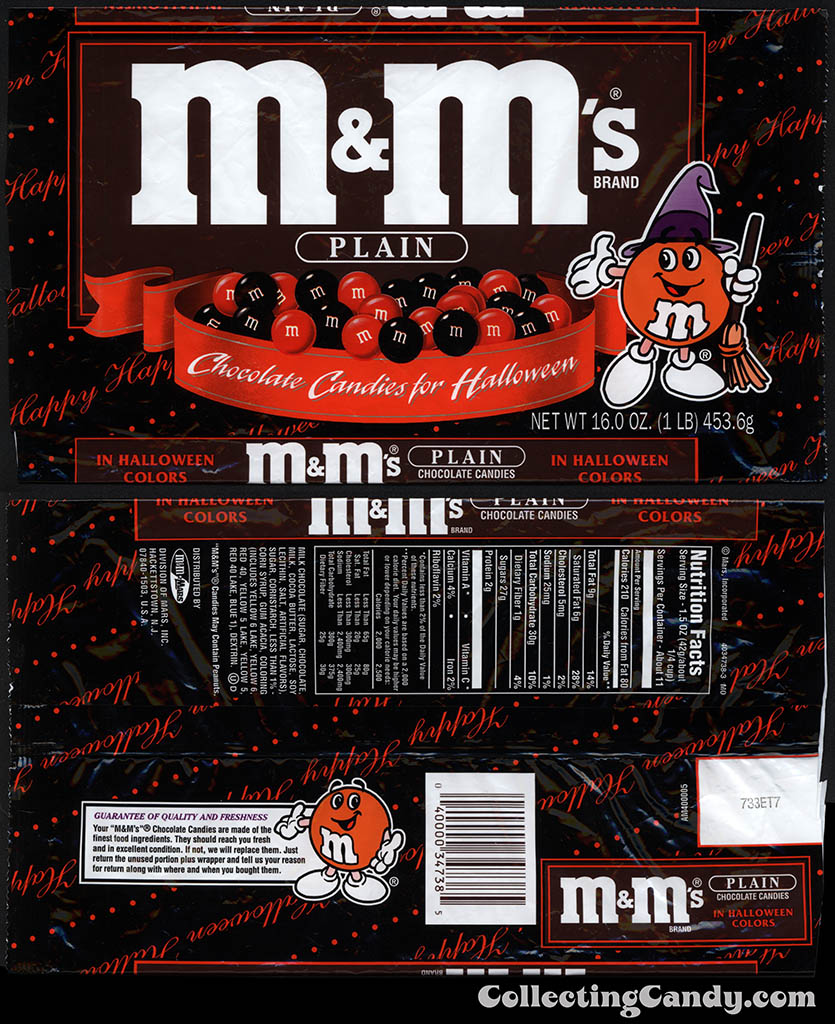 During the 1990’s Mars introduced M&M’s Minis to the marketplace and they’re still around today, though I don’t see them as often.  From that early period in M&M’s Minis life comes this next piece – a large package created for Halloween that contained 18 fun-size M&M’s Minis boxes:

Here’s an example of what one of the Minis fun-size boxes looked like (I didn’t have these stored together, so I’m not sure they are a matching set – but they probably are): 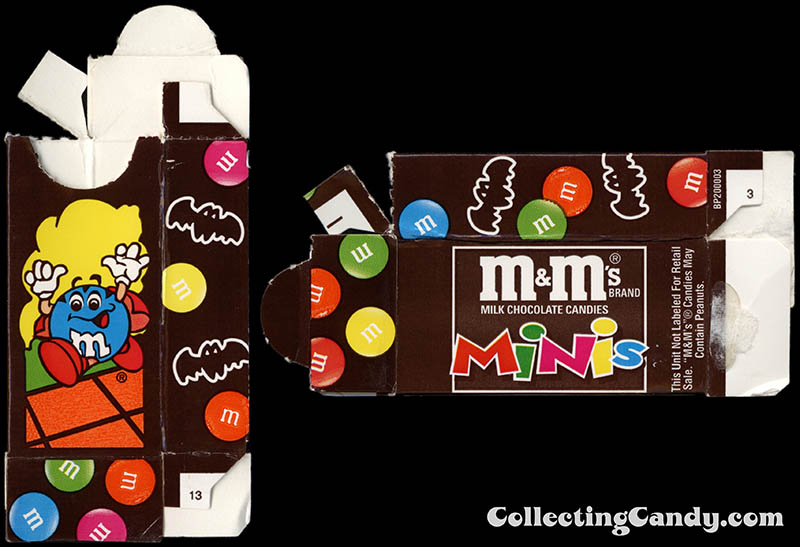 Finally, we jump ahead to the mid-to-late 2000’s, with another lovely Halloween themed M&M’s package.  At this point, the branding had been termed the “Pumpkin Mix” and Halloween graphics were printed on each individual M&M candy piece.  It’s awfully cool that they printed little Jack-O-Latern graphics on each M&M.  These also feature the modern, rendered versions of the M&M’s character mascots:

At this point I’m a bit embarrassed to say that my evolutionary coverage needs to come to a halt as I couldn’t find my more recent Halloween M&M’s packages in time for today’s post.

I do encourage you to check out some of the neat Halloween M&M’s releases I’ve covered in the past with Candy Corn M&M’s, Pumpkin Spice M&M’s and their Halloween-themed theater-sized boxes.

And that’s everything for today’s post and my look back at M&M’s historical Halloween packaging evolution.  See you next time!

(Well, one more thing to share – not necessarily Halloween, but very Halloweenish – it’s the Addams Family done up as M&M’s on a promotion for Dark Chocolate M&M’s) 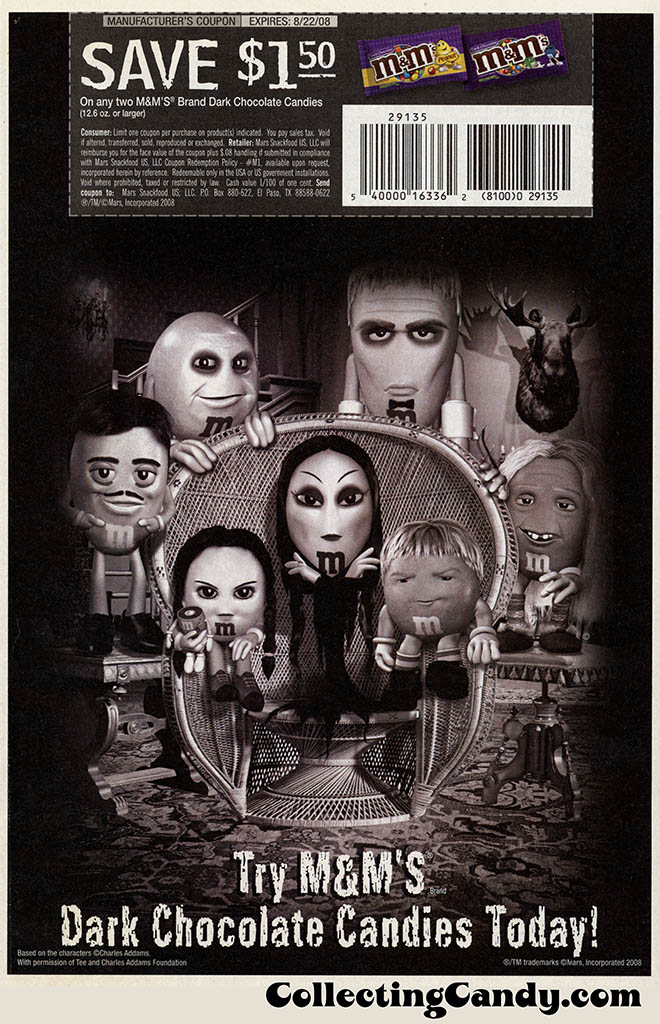 A New York City based writer, editor and sometimes actor. After spending much of the 1990′s in the comic book business helping tell the stories of Marvel Comics’ X-Men as series editor, he has since split his time between developing his own entertainment properties while still consulting and working on others. Having been described as “the Indiana Jones of lost and forgotten candy”, Jason is one of the country’s premier candy collectors and historians with his discoveries appearing in countless blogs, magazines, newspaper articles, and books. Always happy to share his knowledge and unique perspectives on this colorful part of our popular culture, Jason has consulted with New York’s Museum of Food and Drink and has also been a featured guest on Food Network’s Heavyweights, France’s M6 Capital, and New York’s TheActionRoom.com. My Google Profile+
View all posts by Jason Liebig →
This entry was posted in 1980's, 1990's, Chocolate, CountdownToHalloween, Halloween, Holiday, M&M's, Mars and tagged candy collecting, candy collection, candy collector, candy wrapper collection, candy wrapper collector, collectible, collecting candy, confectionery, confections, Halloween, holiday, M&M's, Mars, mascot, packaging, seasonal, sweets, vintage candy wrapper, wrapper. Bookmark the permalink.