Back in the 1970’s the Amurol company, known at the time for their sugarless gum and confectionery products, released a kid-targeted sugarless bubblegum called Whammo.  The gum’s name didn’t stick and within a few years Whammo became Blammo.   Today we’re going to look at both of them and the clues of how one transformed into the other.

For those not old enough to remember Amurol’s early sugarless years, you will likely recognize the company’s later categories of products like their novelty bubblegum containers, including the likes of bubblegum CD Players, pagers and padlocks.  Amurol also happens to be the company who first launched Big League Chew back in the early 1980’s.

The earliest evidence I have of Amurol’s Whammo gum comes in the form of a weekend newspaper ad from the Chicago Tribune date September 8th, 1974 – this one features a mail-away offer for Mattel’s Barbie and Hot Wheels:

That ad showcases the earliest form of Whammo Bubblegum which came in individually-wrapped pieces similar to Fleer’s Dubble Bubble and Donruss’ Super Bubble.  I am fortunate to have a wrapper from one of these first versions of Whammo bubble gum in my collection:

This first form of Whammo bubblegum was also featured in a promotional flyer for a Topps’ competing Bazooka Sugarless gum: 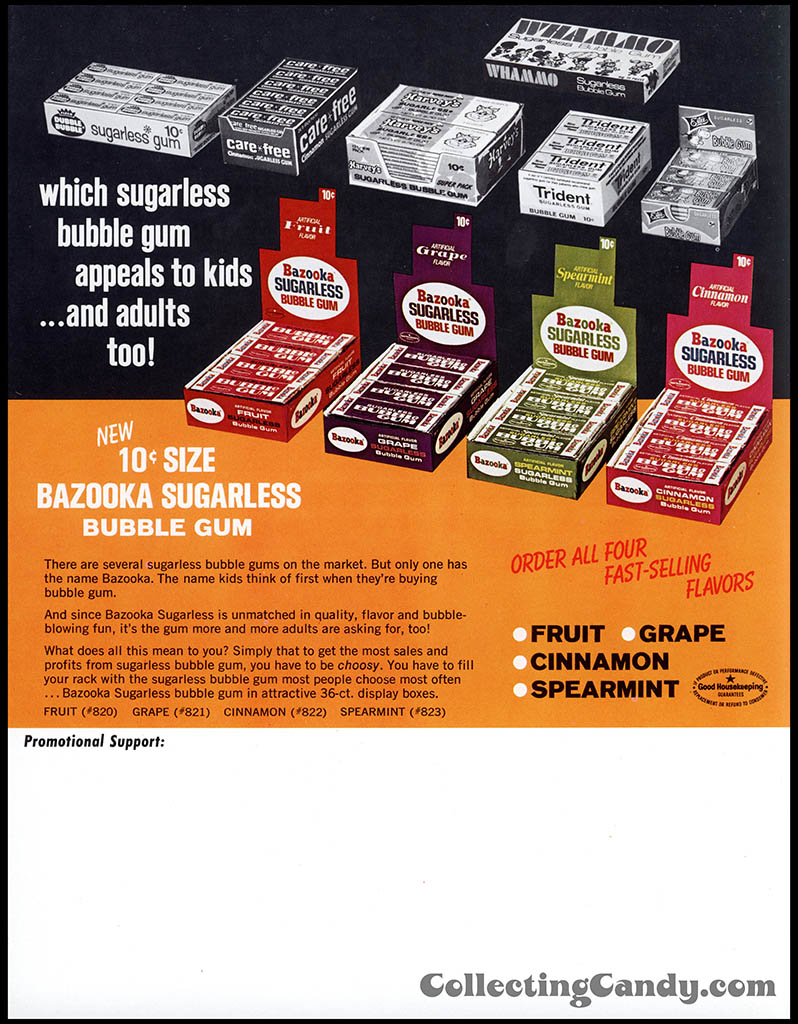 Sometime in the first couple of years after its introduction, the name of Whammo bubblegum was changed to Blammo.   Though I could find no hard evidence or corroboration, I’m confident that the reason was due to the existence of the Wham-O company.

Though not a confectioner, Wham-O was in the business of colorful products for kids so I could see where a trademark or name challenge would have been valid.  I happen to be a lifelong Wham-O fan, and have been a collector of their wonderful Magic Windows for the last decade: 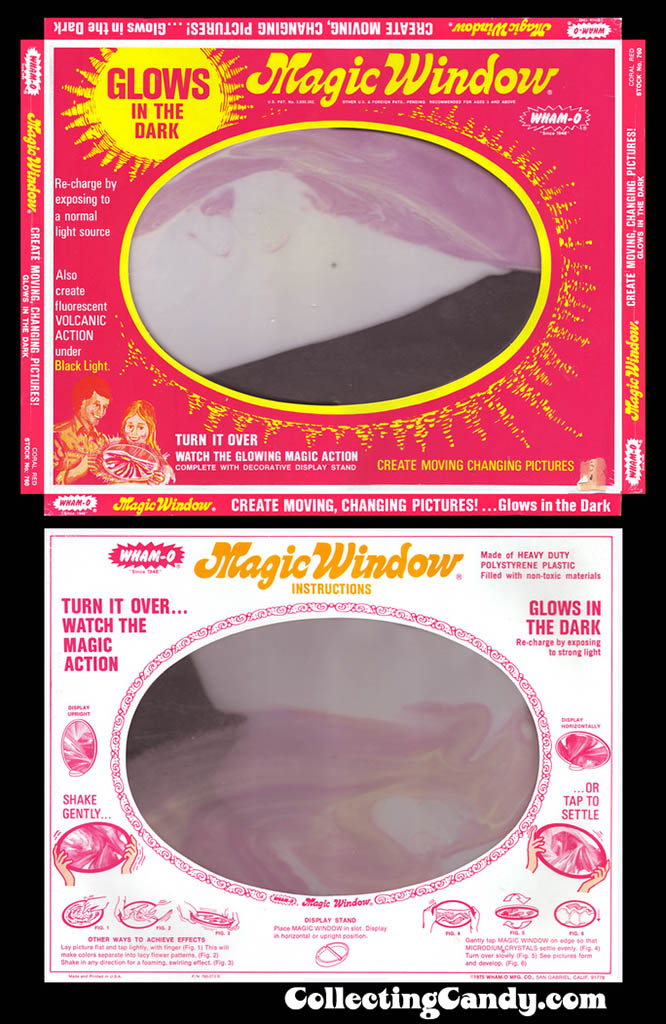 For anyone who might be curious about that Wham-O, I can highly recommend the Wham-O 60th Anniversary book by Tim Walsh, which I was delighted to provide input on.

Getting back to the bubblegum, by 1977 Whammo had gotten a name change and become Blammo. 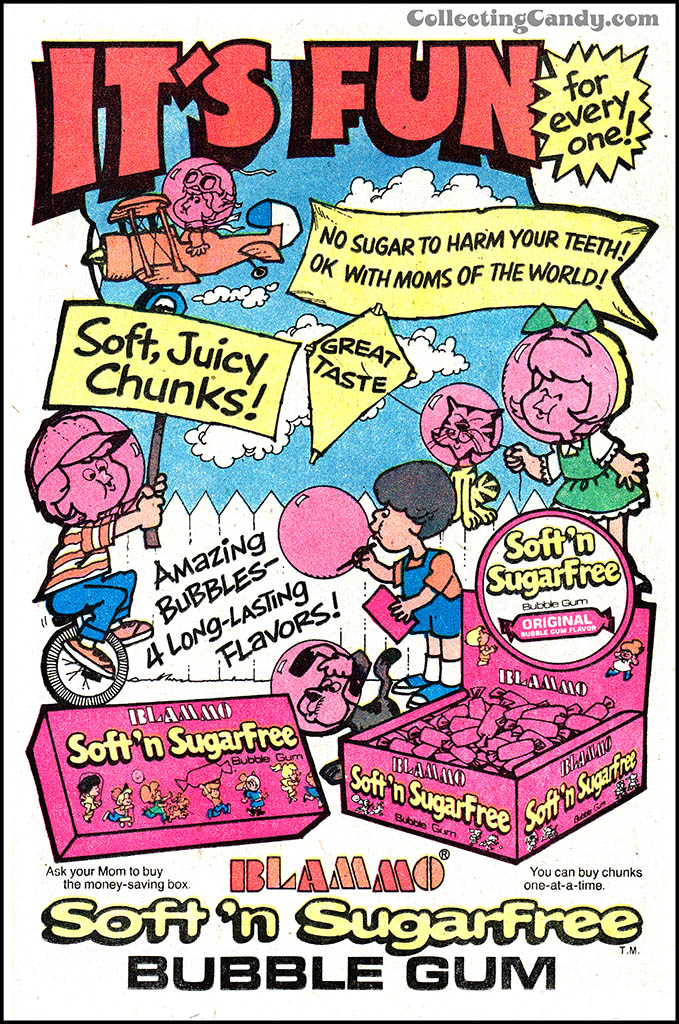 Here’s an interesting skateboard contest for the brand, an ad which I found on the Spanish-language skateboarding website Skatecuriosidade.com. 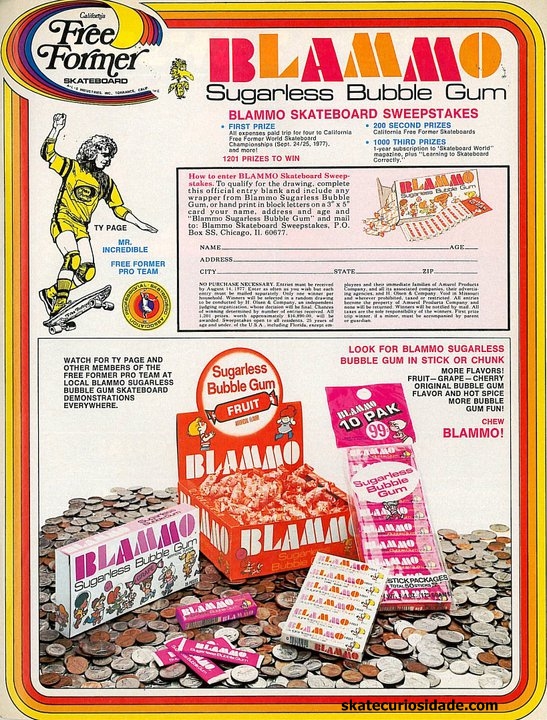 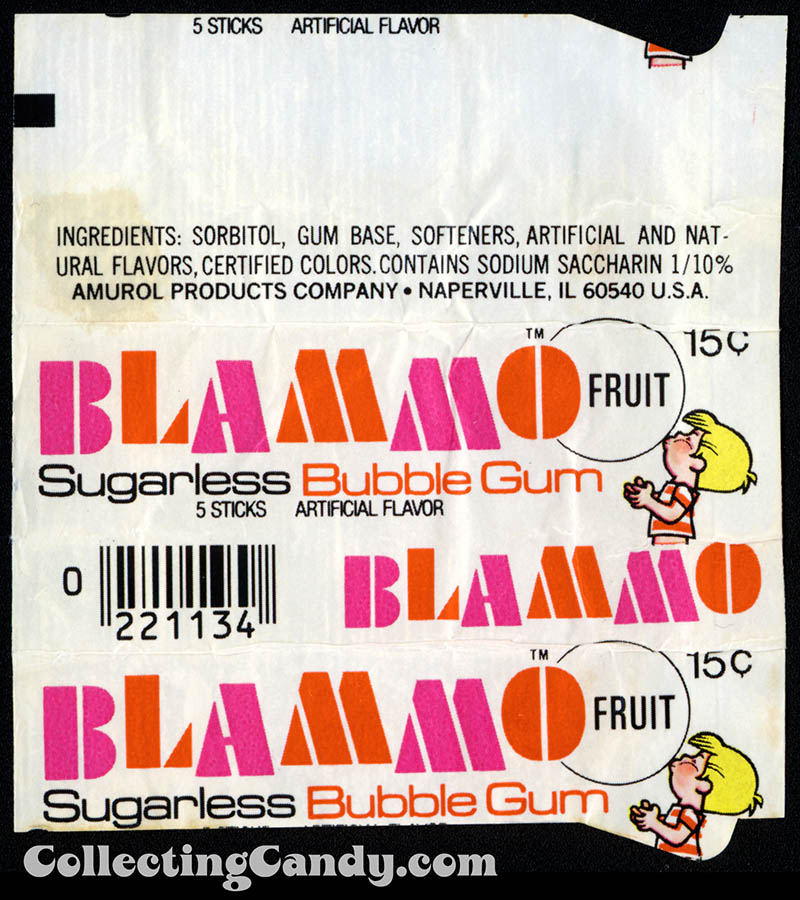 In 1978, Amurol partnered up with Ralston to get packs of Blammo into Cookie Crisp cereal: 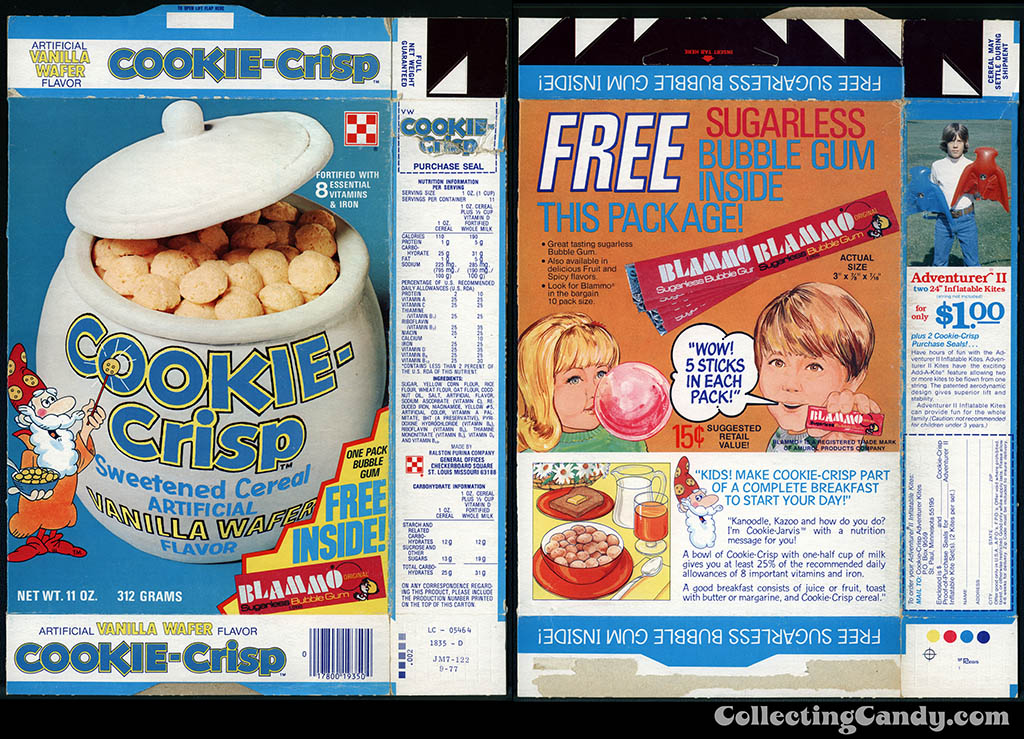 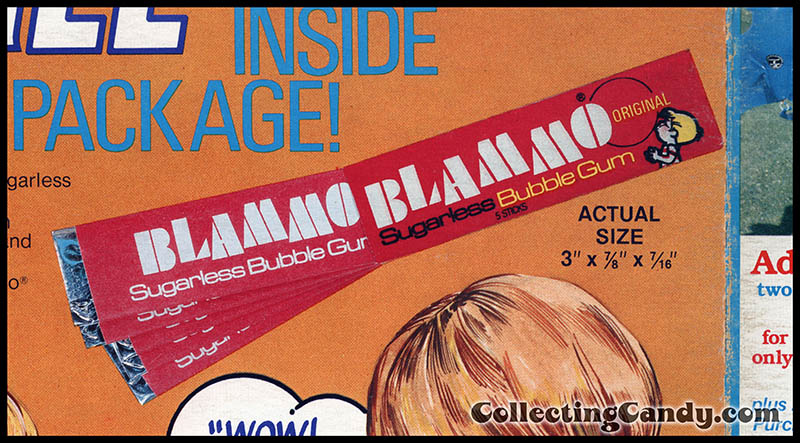 Here are a few more variety of inner paper stick gum wrappers I have for Blammo: 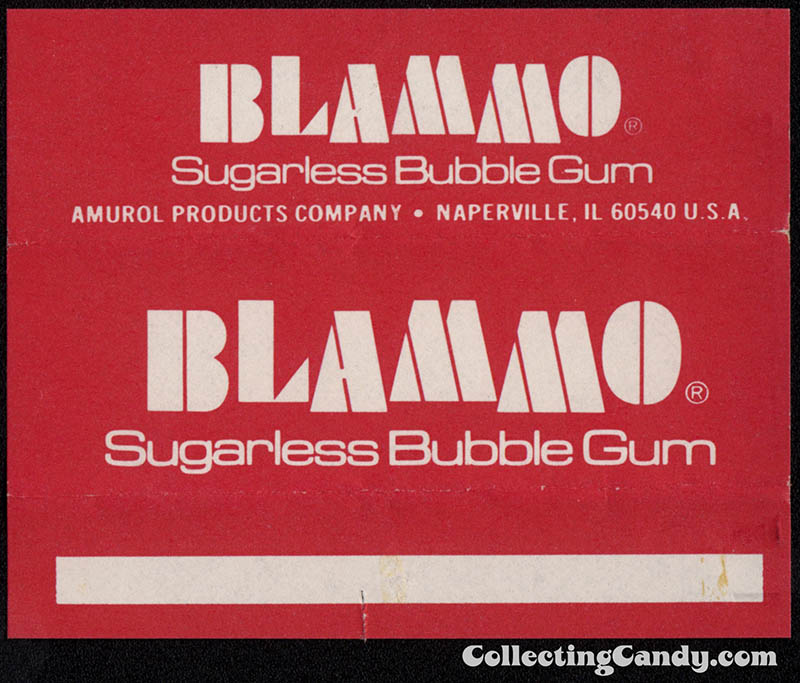 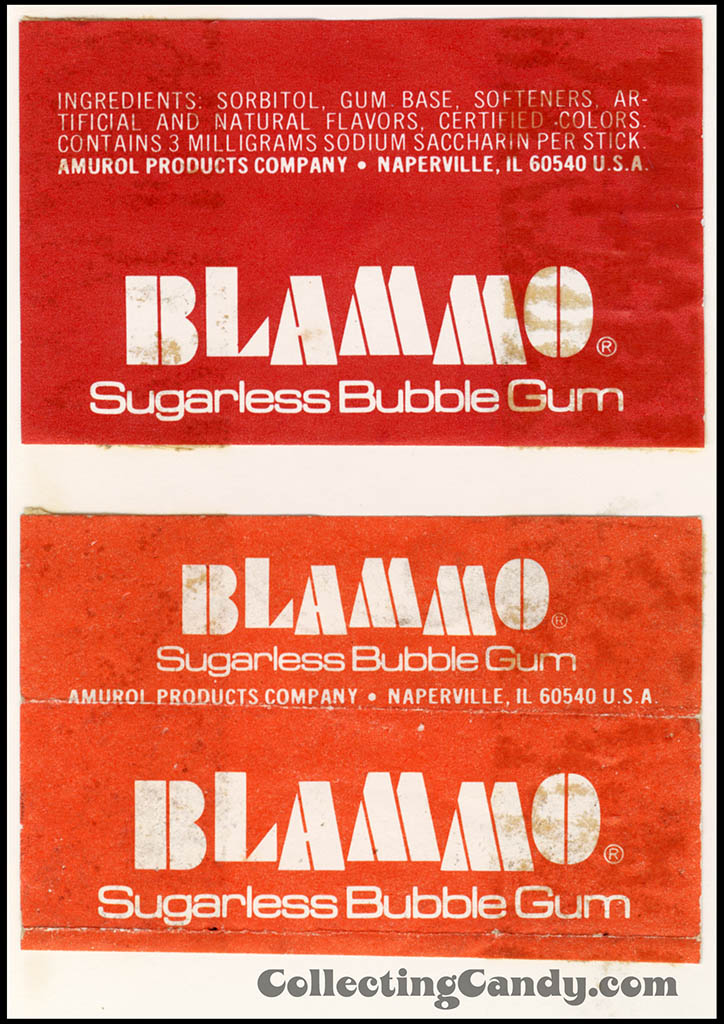 I believe that Blammo didn’t last beyond 1979, as any mentions of the brand appear to stop then.

Eventually I’d love to track down more pieces of vintage Whammo and Blammo gum packaging.  I think it would be especially cool to find one of the colorful display boxes for the individually-wrapped version.  For now, my hunt continues.

And that’s everything I’ve got to share on Amurol’s Whammo – the sugarless bubblegum that went Blammo.

A New York City based writer, editor and sometimes actor. After spending much of the 1990′s in the comic book business helping tell the stories of Marvel Comics’ X-Men as series editor, he has since split his time between developing his own entertainment properties while still consulting and working on others. Having been described as “the Indiana Jones of lost and forgotten candy”, Jason is one of the country’s premier candy collectors and historians with his discoveries appearing in countless blogs, magazines, newspaper articles, and books. Always happy to share his knowledge and unique perspectives on this colorful part of our popular culture, Jason has consulted with New York’s Museum of Food and Drink and has also been a featured guest on Food Network’s Heavyweights, France’s M6 Capital, and New York’s TheActionRoom.com. My Google Profile+
View all posts by Jason Liebig →
This entry was posted in 1970's, Bubble Gum, Gum, Uncategorized and tagged Amurol, bubblegum, candy collecting, candy collection, candy collector, candy wrapper collection, candy wrapper collector, collectible, collecting candy, confectionery, confections, packaging, sugarless, sweets, vintage candy wrapper, Wham-O, wrapper. Bookmark the permalink.