I’ve often stated that one of my favorite things to uncover and learn about are the little-known extensions and flavor spinoffs from the well-known candy brands we love.  Today, I get to reveal a pair of them that you almost certainly have never heard of before.  From the 1970’s comes a previously unknown member of the fruit-flavored Duds family: Orange Duds.  And from a decade ago, it’s the most unusual Fun Dip flavor you’ve ever seen: Sweet & Spicy Mango with Chili Fun Dip!

As regular readers of this site may know, I’ve spent years tracking down information and packaging examples from the 1970’s fruit-flavored Duds line.  I wrote up everything I’d learned about Holloway’s fruit-flavored Duds back in December 2012, and for a long time since then I’d not found any new scraps of information.  But today I get to unveil the news of a flavor that was only rumored to exist – let’s take a look at Holloway’s Orange Duds! 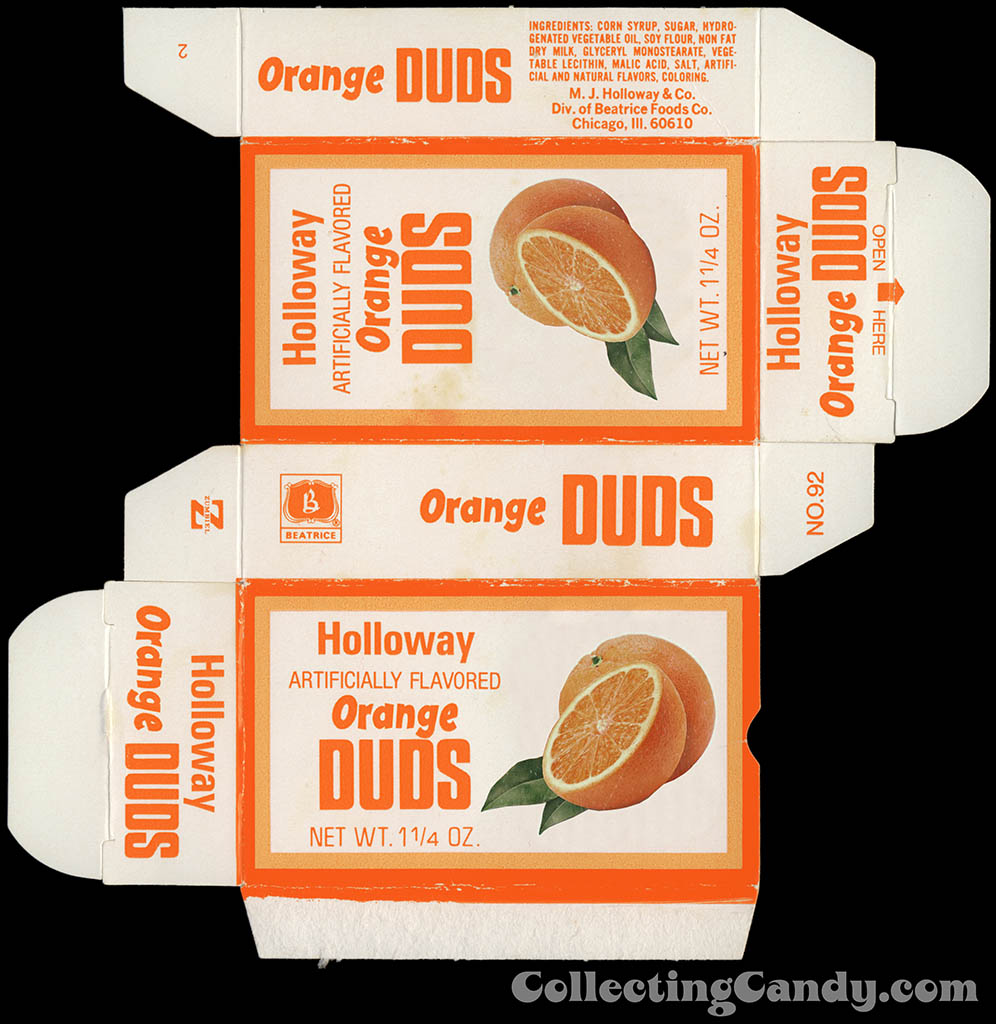 Did I get anyone?

By now, you’ve realized that today’s column is all about having a little fun and celebrating the tradition of April Fool’s Day.  This is a bit of a follow-up to last year when I tried the same trick of introducing never-before-seen flavors of existing brands.  Last year I took aim at Willy Wonka’s Oompas and Hot Tamales along with my childhood favorite, the Marathon bar.

At this point you would probably assume that Orange Duds are purely the product of my imagination, but it might just be possible that a real Orange Duds existed back in the 1970’s – we just don’t know.  Holloway’s fruit-flavored Duds line is one that is shrouded in quite a bit of mystery and I’ve heard hazy recollections of people who remember more flavors than what we know definitively to exist.  Those confirmed-to-have-existed flavors being Grape, Cherry, Banana and Strawberry Duds.

So a real Orange Duds candy might possibly have existed and a box for them may be out there somewhere waiting to be discovered, but what I showed you today is not it.  It would be awfully exciting to turn up a real Orange Duds box, or any other fruit-flavored Duds box that isn’t currently known about.  For now, all we have is flavorful speculation.

What about that crazy Sweet & Spicy Mango with Chili Fun Dip?  Well, that one is actually half-real – here’s a closer look: 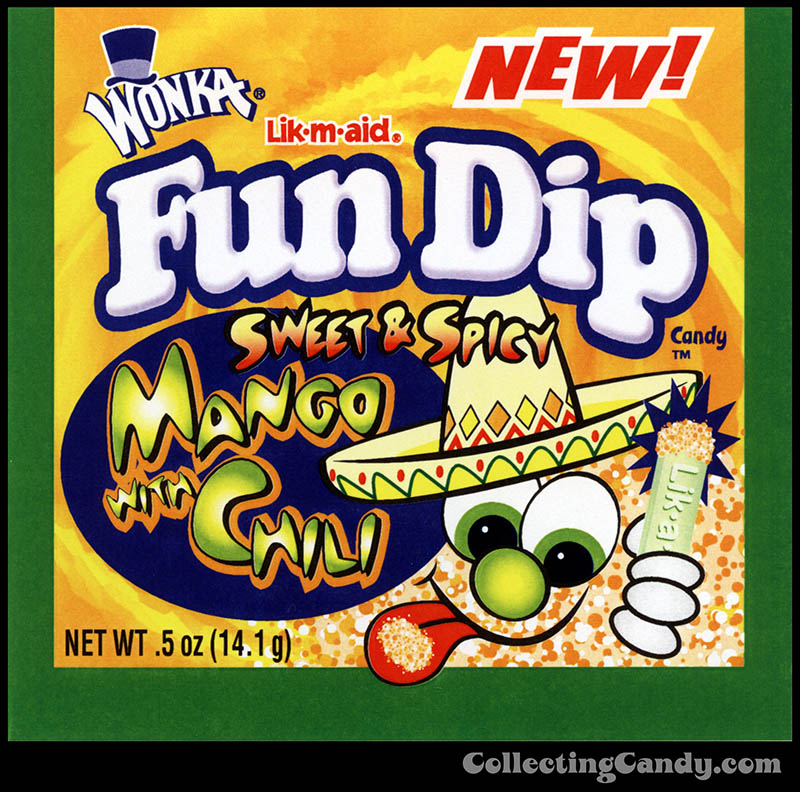 Back in 2003, Nestle-Wonka actually considered producing a Mango with Chili flavored Fun Dip (and Nerds, too) for regional markets, but to the best of my knowledge they never made it past the concept stage.  The artwork seen here today was one of the actual internal packaging concepts generated during that time and came from the discarded files of an ex Wonka employee (probably a retired Oompa Loompa).

So even though Mango with Chili Fun Dip never made it to market, isn’t it amazing to see?  I can’t say if a sweet and spicy Fun Dip would have sold very well, but I’m dying to try it!  What do you think?

I hope you’ve enjoyed today’s tricky post and our special look back at a never-before-seen Wonka product that almost was.

And that’s everything for this year’s April Fool’s Day entry .  See you next time!!

A New York City based writer, editor and sometimes actor. After spending much of the 1990′s in the comic book business helping tell the stories of Marvel Comics’ X-Men as series editor, he has since split his time between developing his own entertainment properties while still consulting and working on others. Having been described as “the Indiana Jones of lost and forgotten candy”, Jason is one of the country’s premier candy collectors and historians with his discoveries appearing in countless blogs, magazines, newspaper articles, and books. Always happy to share his knowledge and unique perspectives on this colorful part of our popular culture, Jason has consulted with New York’s Museum of Food and Drink and has also been a featured guest on Food Network’s Heavyweights, France’s M6 Capital, and New York’s TheActionRoom.com. My Google Profile+
View all posts by Jason Liebig →
This entry was posted in 1970's, Boxed, Nestle, Wonka and tagged candy collecting, candy collection, candy collector, candy wrapper collection, candy wrapper collector, collectible, collecting candy, confectionery, confections, packaging, sweets, vintage candy wrapper, wrapper. Bookmark the permalink.