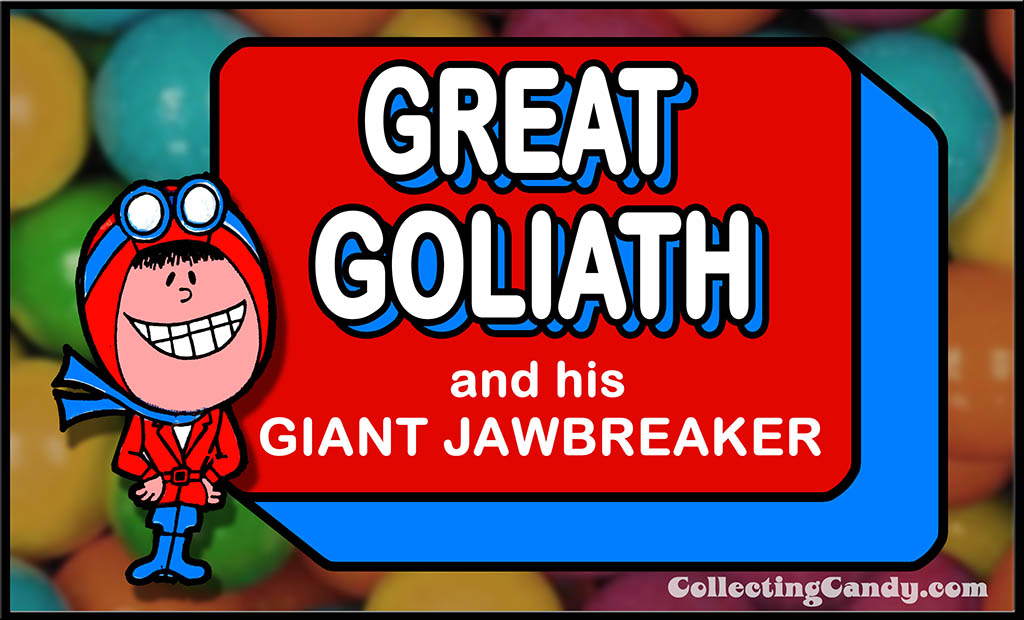 Today’s post is an especially fun one as I get to premiere the only known images and information for a candy product that would otherwise be forgotten to time.  Not only is it something you’ve never seen before, but it just so happens that this vintage gem shares a good bit of heritage with the Wonka candy brand.  So let’s get to it as I unveil, for the first time anywhere, Breaker Confections’ Great Goliath and his Giant Jawbreaker!

I’ve posted before about some of the history of Breaker Confections and how they would eventually become one of the original Wonka candy companies.  But well before they would manufacture and produce the original Everlasting Gobstopper, they would be known for producing jawbreakers – it’s how they got their name, after all.

My guess is that Breaker’s Great Goliath and his Giant Jawbreaker was first introduced in the late 1960’s, though I can’t say for certain.   I do have an early trade announcement discussing them from 1971:

For several years, the only evidence that I had of Great Goliath at all was that trade clipping.  I spent a lot of time peering at that small image, wondering what those old Great Goliath packages might have looked like, trying to make out details that simply didn’t exist: 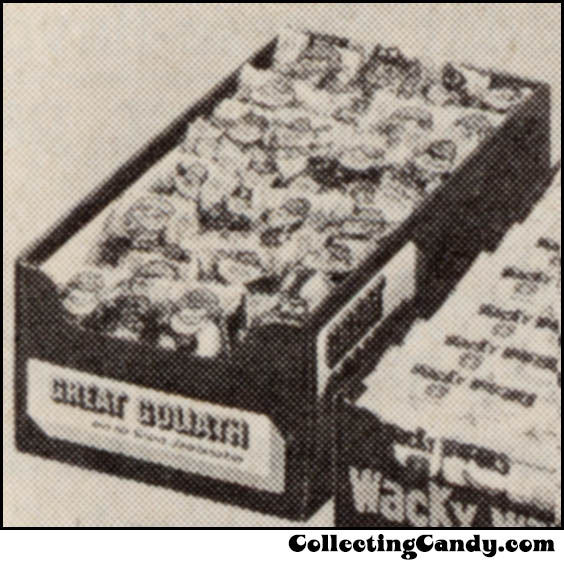 My quest for a Great Goliath wrapper would eventually succeed back in 2012 when I tracked down a mid-1970’s example.  While it was a later iteration and not the wrapper I had glimpsed in that old trade clipping – it was still an exciting find: 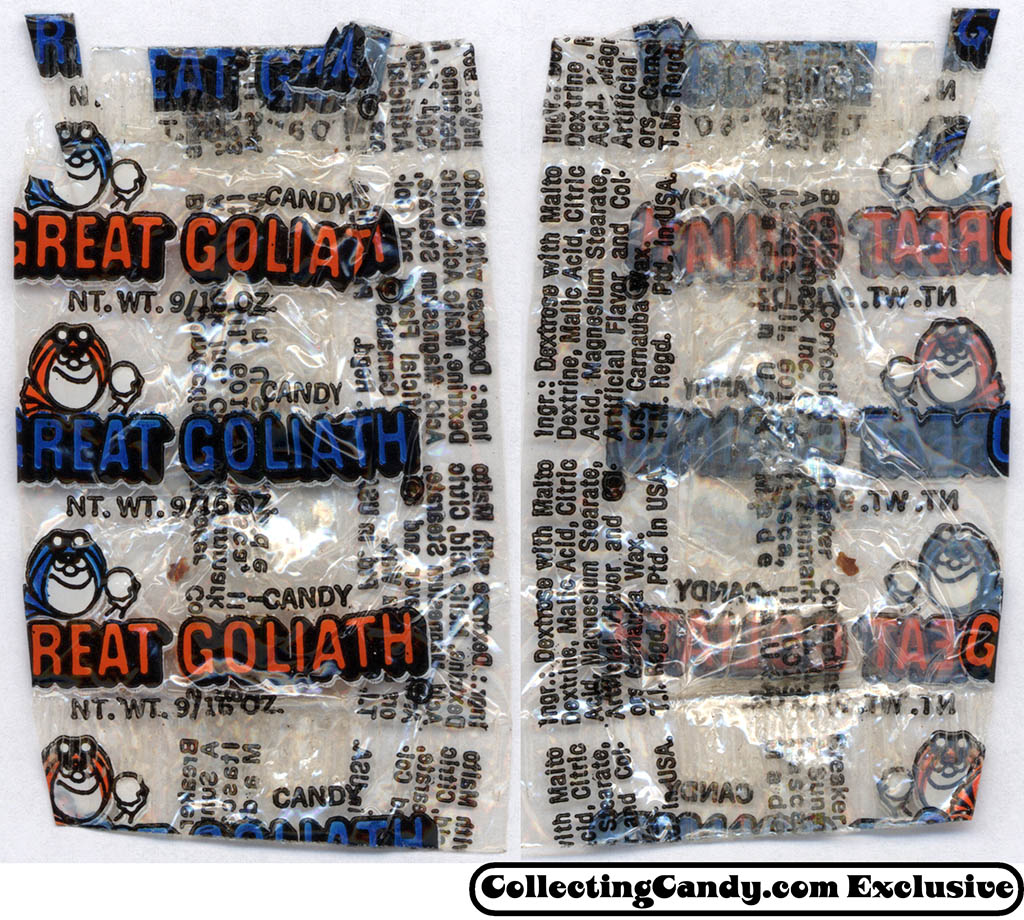 It took so long to track down any evidence of Great Goliath at all, I wondered if I might ever see that earlier version of the packaging.  That all changed in December 2013 when I would finally add an original Great Goliath wrapper to my collection.  Here it is: 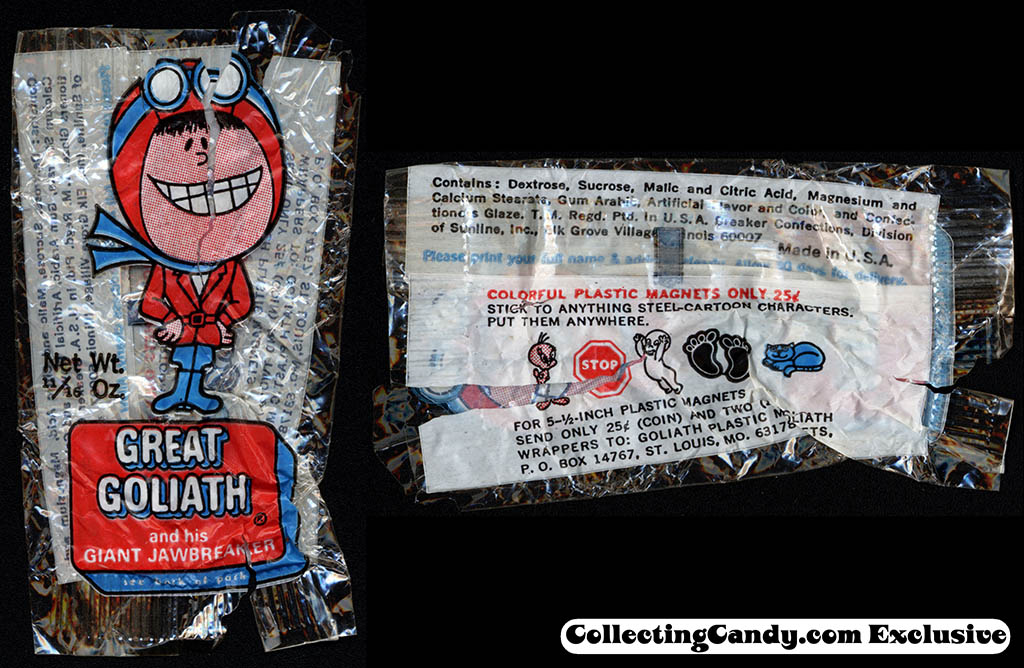 Though the cellophane was a little misshapen and torn, it is still a wonder to finally see this package.  Not only that, but I would learn that the full name of this treat was actually Great Goliath and his Giant Jawbreaker.

Learning the full name was quite a revelatory thing and it got me thinking – something about it sounded familiar.  The cadence of “Great Goliath and his Giant Jawbreaker”?  It sounded quite a lot like “James and the Giant Peach”, and my guess is that it was probably no coincidence.   I am confident that Great Goliath’s name took inspiration from the title of that book.

So, for a bit of fun connecting-of-the-dots, James and the Giant Peach was written by Roald Dahl, who also happens to be the author of Charlie and the Chocolate Factory – the basis for the film, Willy Wonka and the Chocolate Factory.  And Great Goliath jawbreakers, made by Breaker Confections, would be discontinued right around the time that they would begin producing the Everlasting Gobstopper jawbreaker – a product of Willy Wonka.

Neat, huh?  Yep, if you spend your time looking at candy all day, you can find all sorts of unexpected things.

And that’s everything for today’s world premiere of Breaker’s Great Goliath and his Giant Jawbreaker!

A New York City based writer, editor and sometimes actor. After spending much of the 1990′s in the comic book business helping tell the stories of Marvel Comics’ X-Men as series editor, he has since split his time between developing his own entertainment properties while still consulting and working on others. Having been described as “the Indiana Jones of lost and forgotten candy”, Jason is one of the country’s premier candy collectors and historians with his discoveries appearing in countless blogs, magazines, newspaper articles, and books. Always happy to share his knowledge and unique perspectives on this colorful part of our popular culture, Jason has consulted with New York’s Museum of Food and Drink and has also been a featured guest on Food Network’s Heavyweights, France’s M6 Capital, and New York’s TheActionRoom.com. My Google Profile+
View all posts by Jason Liebig →
This entry was posted in 1970's, Nestle, Wonka and tagged 70's candy, Breaker, Breaker Confections, candy collecting, candy collection, candy collector, candy wrapper collection, candy wrapper collector, collectible, collecting candy, confectionery, confections, jawbreaker, mascot 1970's candy, packaging, Sunmark, sweets, vintage candy wrapper, Willy Wonka, Wonka, wrapper. Bookmark the permalink.

1 Response to Breaker Confections’ Great Goliath and his Giant Jawbreaker!